Home Living At Home... Why does Telus Lie to Customers? 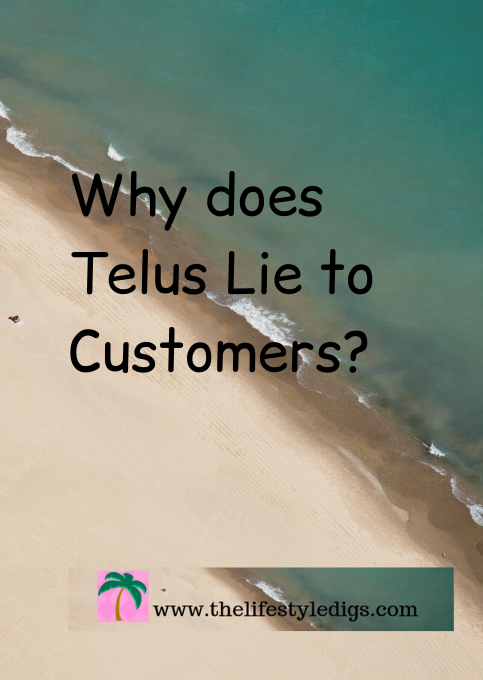 Telus is a telecommunications company in Western Canada. It was originally BC Tel and provided telephone service. In the last 30 years they changed their name and added Internet and TV services.

I’ve been a customer of BC Tel and/or Telus for decades. No competition in the marketplace until the past 20 years or so.

I signed up for Telus Internet about 20 years ago. In the early stages of Internet I had a couple of different providers before them, but Telus offered a package deal, $5 off for telephone customers who added Internet. This was back in the olden days with a dial up modem. If you didn’t disconnect from the computer and Internet when you were done, your phone stayed off the hook. Anyone trying to phone you would get a busy signal.

It all started on Thursday morning, August 15, 2019. I received emails until around 7:30am. I probably didn’t notice right away that emails weren’t coming in because I was doing other things.

Then I went out for a few hours.

When I came home around noon I was surprised I had no new emails. Very strange. I get a lot of business related emails all day long. I tried a couple of things, like closing Outlook and then rebooting my computer.

I opened the email program on my iPhone and Kindle.

No emails came through, so now I know it’s a bigger problem.

Then I headed to Twitter and there were a lot of angry Telus customers! There were very few responses by the incompetent employee responsible for monitoring the social media. A few insincere replies showed up saying sorry for the inconvenience, we’re investigating why this happened and working hard to restore email.

Pissed off Telus clients contacted the news media who began to cover this major fail. It’s not only personal email but business accounts that rely on email are really screwed.

Telus announced they hoped to restore service by Friday morning.

And Telus sort of did restore service. I had emails when I woke up on Friday morning, August 16, 2019, but then it went down almost right away for a few hours. Later in the afternoon emails showed up sporadically on and off for the rest of Friday. I’d randomly get a couple of emails at a time. Some were from Thursday and some from Friday. They arrived in no particular order based on the time when they were sent.

By Saturday I’m reasonably getting my emails.

I’m one of the lucky Telus customers.

There are many angry Telus customers hitting Twitter who still don’t have email service. Telus is doing a lousy job communicating and responding to questions on Twitter.

By now the TV news stations across Canada are all over the story about the Telus email outage and their lack of communication.

News stations are interviewing angry Telus customers and everyone is extremely disappointed that the Telus email outage is dragging on for days and the lack of support.

On Sunday some bigwig from Telus sends an apology email. Not too bright a move because many customers still aren’t getting emails! Ha ha!

There was also a video apology that eventually was posted to social media. In other words, the clients who are still affected by the Telus email outage after days of no service, can actually see it.

On about day 5 of the Telus email outage, Telus gets their webmail active on their website and tells clients they can use that.

However, it only shows new emails. No emails that might have been coming in over the past few days.

Telus is also really sketchy about telling customers whether missing emails will eventually show up.

I still don’t know if I received all my emails during this period.

I do know when Telus had a similar email outage in February, 2019 that lasted for about a day, I didn’t get any emails from that down time when the service was finally restored. Gone forever. The incompetent buffoons monitoring Telus’s Twitter account refused to respond to my questions on the missing February emails.

Obviously Telus made a corporate decision that ignoring customers is an acceptable way of doing business.

About a week later, on August 22, 2019, I received an apology email from Telus about their email outage. Here’s part of it: 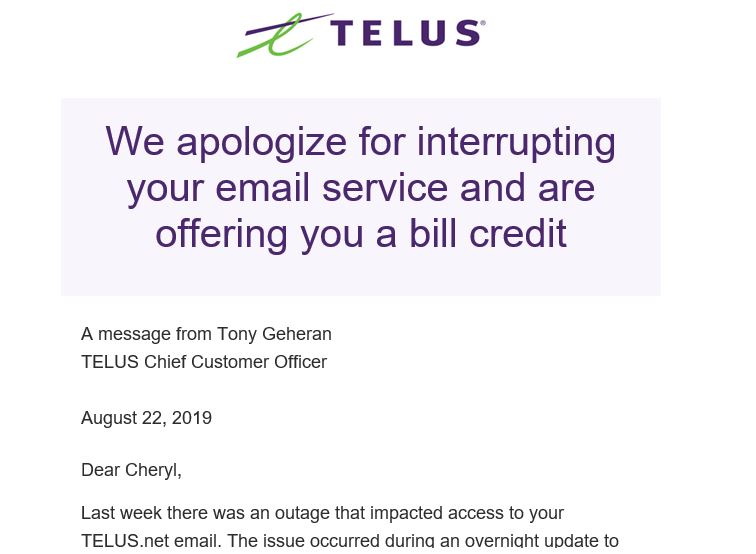 Further along in the email, I find out I’m getting a $7 credit to compensate me for my inconvenience. 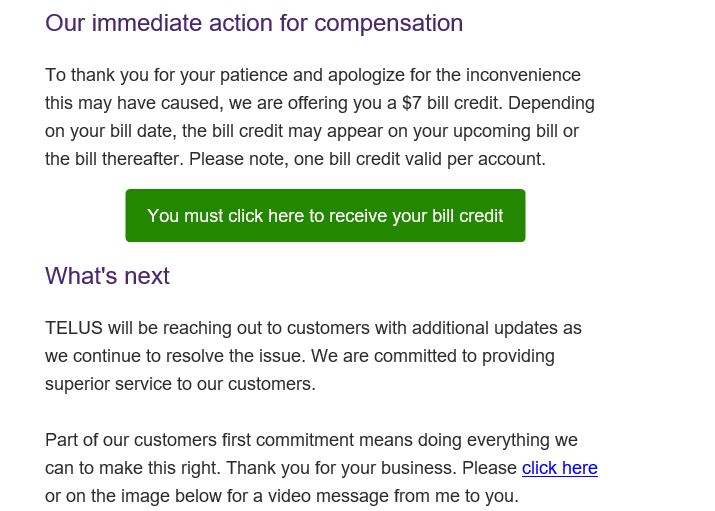 For anyone who actually cares about the video mentioned above, you can see Tony the liar in action on Youtube. Amazing that Telus turned off the feature for people to leave comments. I guess Telus knows they’ll be taking a shit kicking if they leave the comments on!

I followed the instructions from Tony the liar Geheran on the Telus email to click and request my credit the same day I got the email – August 22, 2019.

And I just want to throw this out there. Why do Telus customers have to click a link on an email to request their credit? Telus should just be applying this automatically to client accounts.

Jump through hoops much?!

On September 1, 2019 I received the billing email from Telus in the usual monthly amount. So I thought Telus is getting inundated with credit requests and they didn’t have time to adjust the amounts before emailing invoices.

Perhaps Telus would make the adjustment when the money is automatically withdrawn from my account. I’ve been on auto payments with Telus longer than I can remember.

On September 16, 2019 the usual amount was withdrawn from my bank account by Telus.

It took me a few days to notice on my bank account and I sent a message to Telus on September 23, 2019 that I didn’t get the $7 credit. To which Telus Support replied: Sorry to hear about that.

But, that email from the lying Tony Geheran does say the credit might go through on the following billing period. Telus was probably swamped.

If they were actually crediting accounts that is.

The next invoice Telus emailed me was on October 2, 2019. In the usual amount.

So now I’m getting skeptical that I’ll ever get a credit.

Telus does have a history of being liars. There’s no reason for me not to think this whole credit bullshit is just another lie from Telus.

On October 15, 2019, the regular monthly payment was auto-transferred out of my bank account to Telus.

On November 1, 2019 I received the billing email from Telus in the usual monthly amount due. That was auto-transferred to Telus on November 13, 2019.

So much for that $7 credit because I was inconvenienced by the Telus email outage.

I have spent a lot of money on Telus over the decades and they can’t even honor a one time $7 credit?

Tony Geheran at Telus sent me an email and lied to me!

But then Telus does have a history of being liars.

Watch my video I posted to YouTube. Telus lies to customers as part of their routine of doing business and sees nothing wrong with this. Unacceptable!.