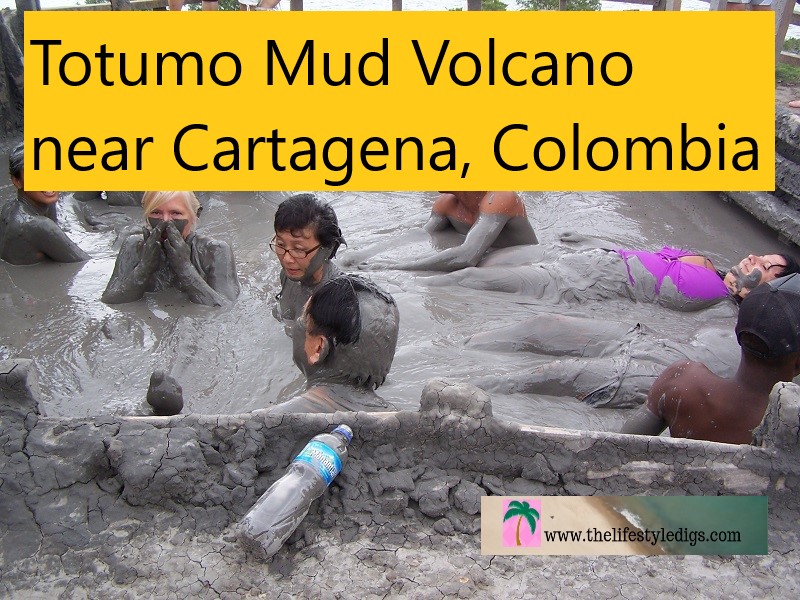 We were on the Grand Panama Canal cruise on the Island Princess and one of the ports of call was Cartagena, Colombia for a few hours.

The day before, the Island Princess was in Aruba.

Cartagena is the last stop before the main event, the reason we were all on this cruise – the Panama Canal!

More than any other port, Cartagena is where you don’t want to mess around. If you plan an independent shore excursion and don’t make it back to the dock before the ship sails – you miss cruising through the Panama Canal. The whole reason you’re on this cruise in the first place. Oh sure, you miss the boat in other ports and then you’re playing catch up, taking a flight to the next port of call. In this case the next port of call would be Panama City a couple of days later, after the Island Princess has gone through the Panama Canal.

My advice is to book an excursion through Princess. If you don’t want to book a shore excursion, the city of Cartagena is very close to the port, a few minutes by taxi. Plan your morning ashore and get back to the cruise around noon or so. The ship leaves Cartagena at 3pm whether you’re onboard or not.

We booked a shore excursion to the mud bath volcano at Totumo. It cost about $50 through Princess, actually one of the more reasonably priced shore excursions ever on a cruise line!

It’s about a one hour drive, much of it along the Caribbean coast, and then heads inland a bit. All of this on paved highways, including three checkpoints with machine gun wielding military men. The last couple of miles as we got close to the village of Totumo, it became a gravel road that was still in good shape. I’m not sure how it would hold up after a big rainstorm…

We arrived at Totumo and the volcano is in sight! The driver pulled over so anyone who wanted to step outside and take photos could do so for a couple of minutes.

The volcano resembles an oversized anthill. 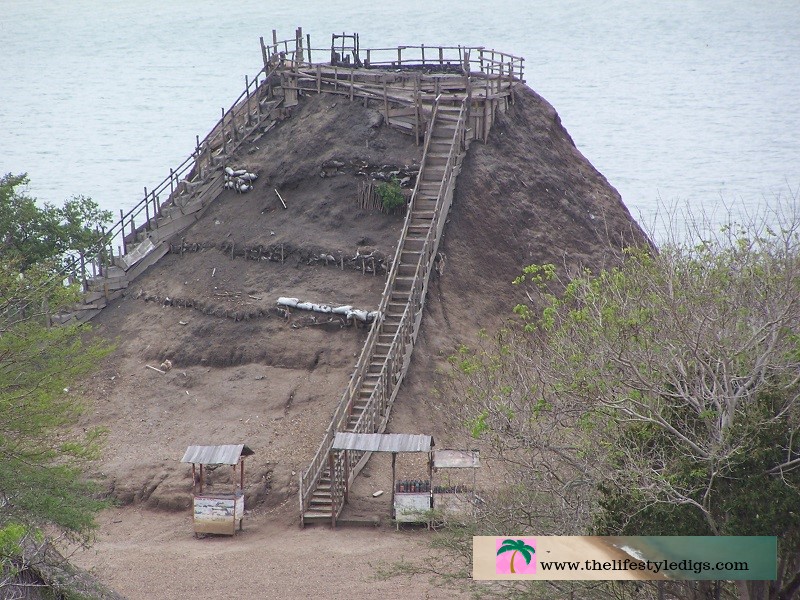 There is a lake behind the volcano, where we’ll wash off the mud later on. 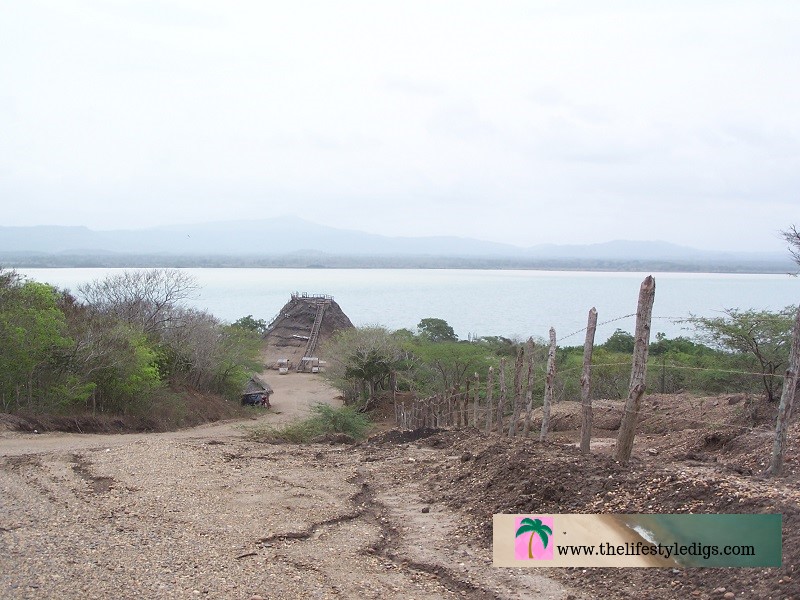 The bus parks and there are changing rooms for those who need them. Most of us planned ahead and wore our swimsuits underneath our clothes. We took our shirts and shorts off inside the bus. Our guide, Bernardo, tells us to leave everything in the bus and it will be locked. He talks about tipping the villagers, who will take photos and assist in the mud. He says one of the villagers will come onboard the bus just before we leave to collect tips that will be shared between them. He tells us to leave our money inside the locked bus, and also requests that we don’t  tip anyone privately, because they likely won’t share with the others.

This is a poor village and they rely on the admission to the mud bath volcano and tips (usually $2 each) for their survival. As you can see from the photos, these are thatched roof huts made from whatever materials they can scrape together. 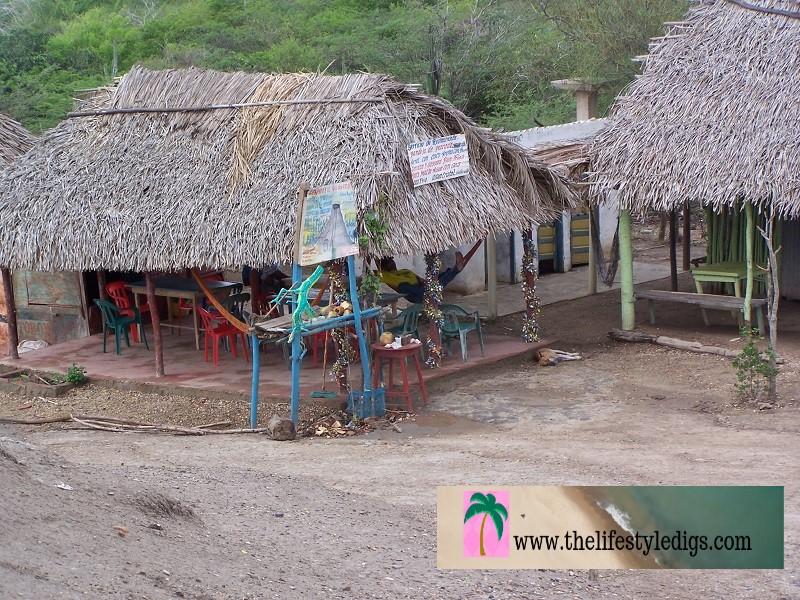 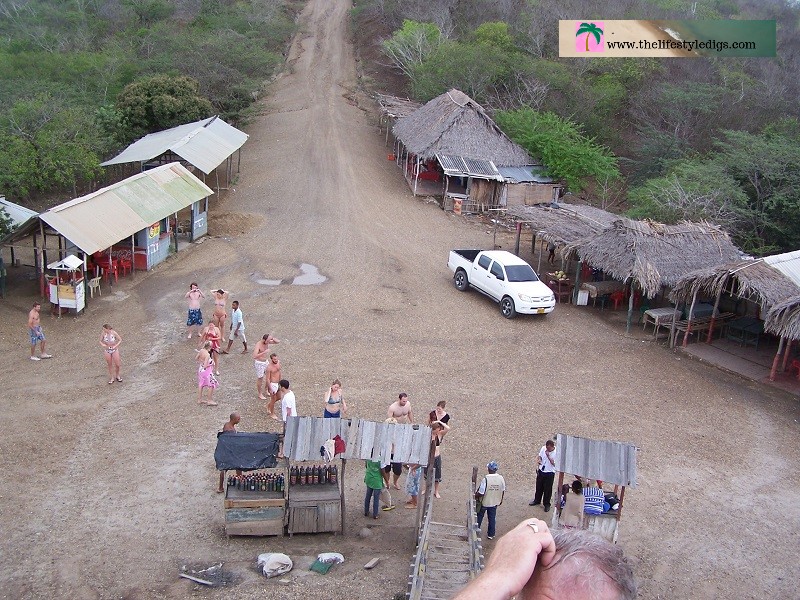 Wearing only my swimsuit and shoes and carrying a Princess Cruises towel from my cabins, I headed to the stairs to climb to the mud bath volcano. One of the village women instructs us to remove our shoes and she places them in a sack and also takes our towels.

I guess it didn’t really matter if our towels got mixed up. They were all white with the Princess Cruises logo on them!

I brought along my camera to take photos. Bernardo had already told us that one of the villagers at the top of the volcano will take our cameras and take photos for us while we’re in the mud.

The mud volcano is about 75 feet high. The rickety steps are crudely constructed from scrap lumber. It’s all part of the journey! 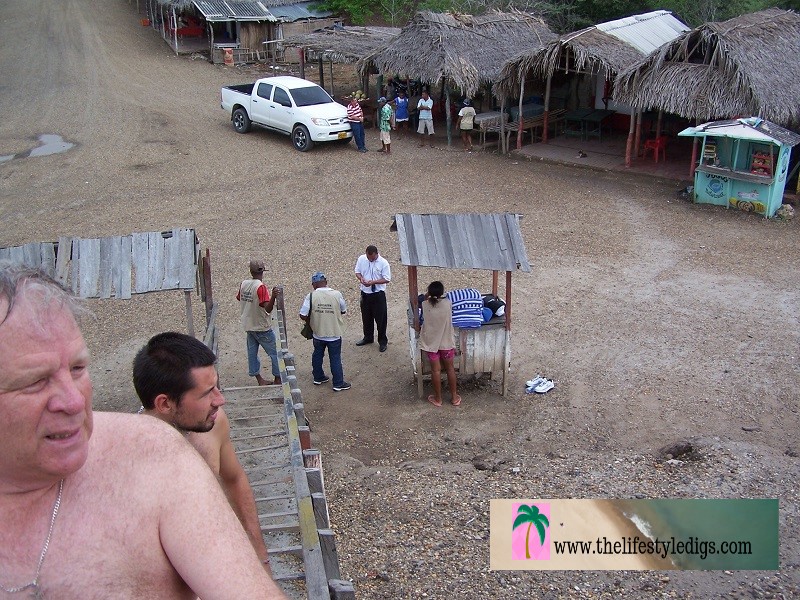 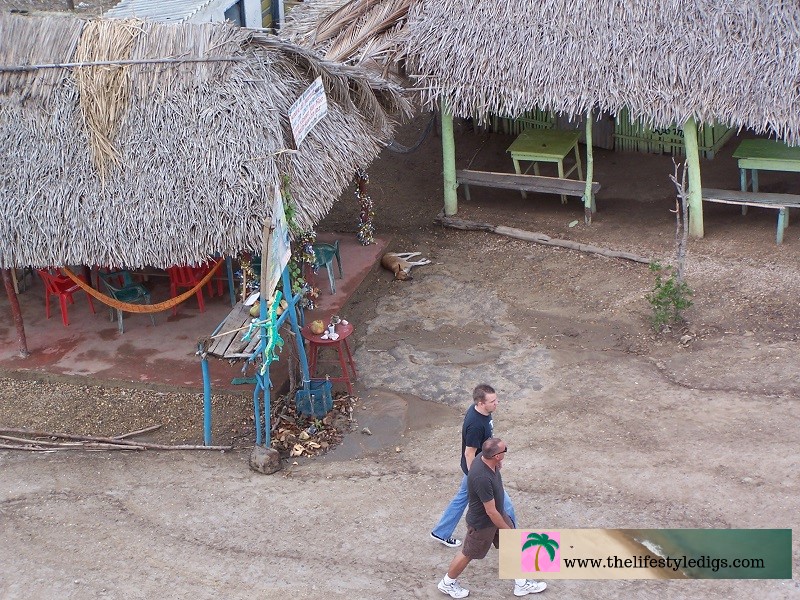 The mud bath is packed with cruise ship passengers. 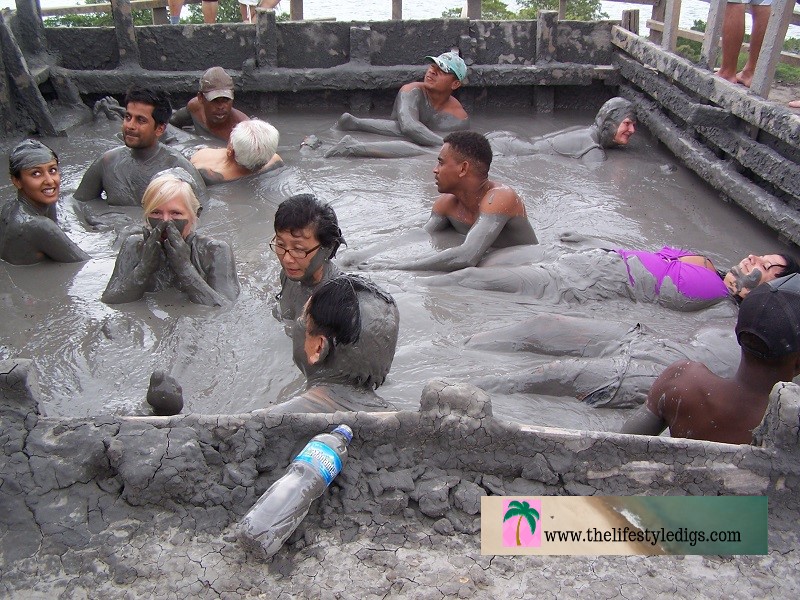 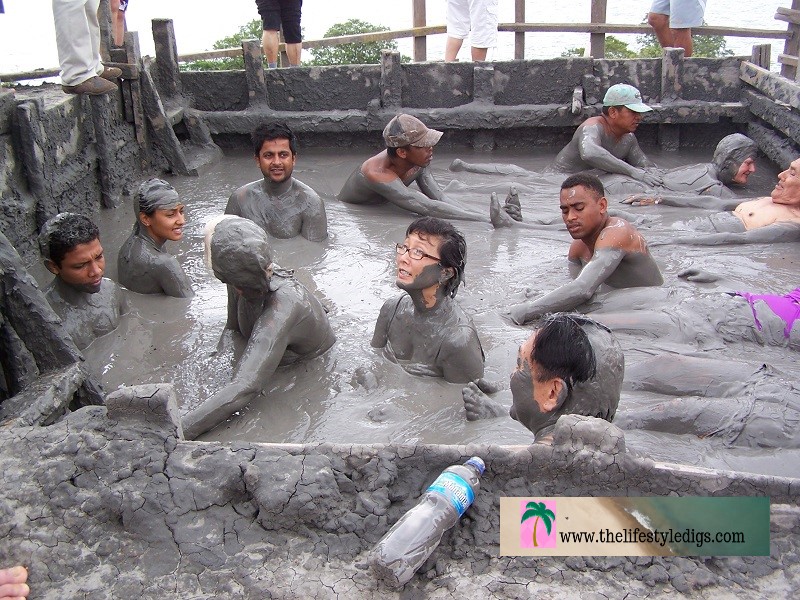 It takes a little while before I get a turn into the mud with at least ten other tourists plus 2 or 3 village men who help cover our bodies with mud. 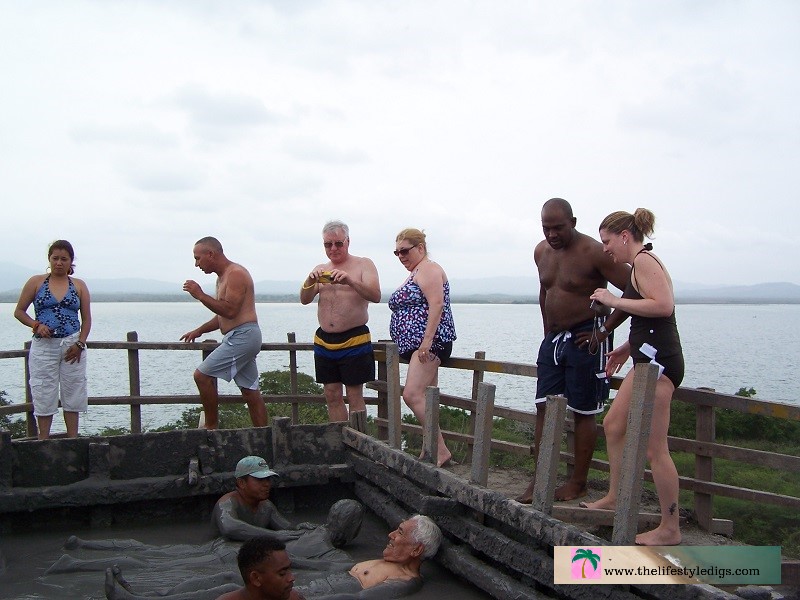 The mud is supposed to have healing properties. Cure your body of aches and pains. Also make you look 10 years younger! Ha ha! 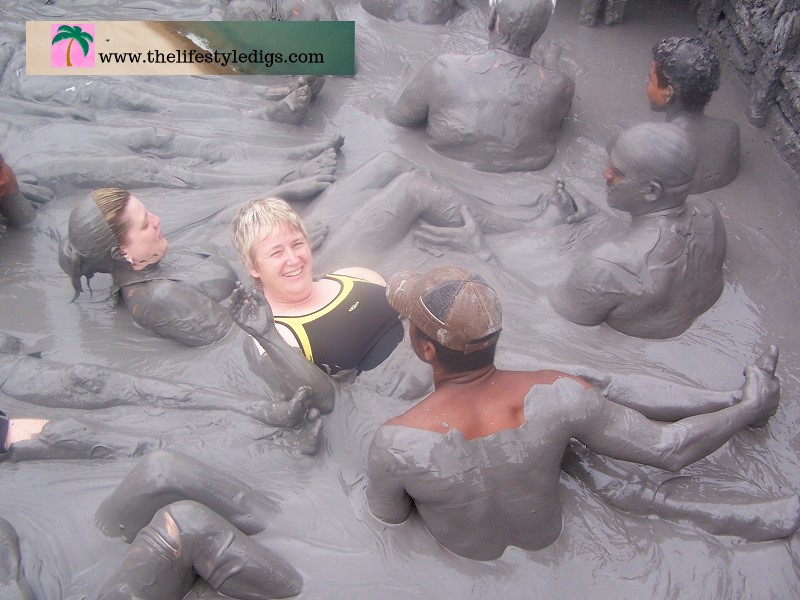 The man beside me sure doesn’t look too happy about getting muddy! 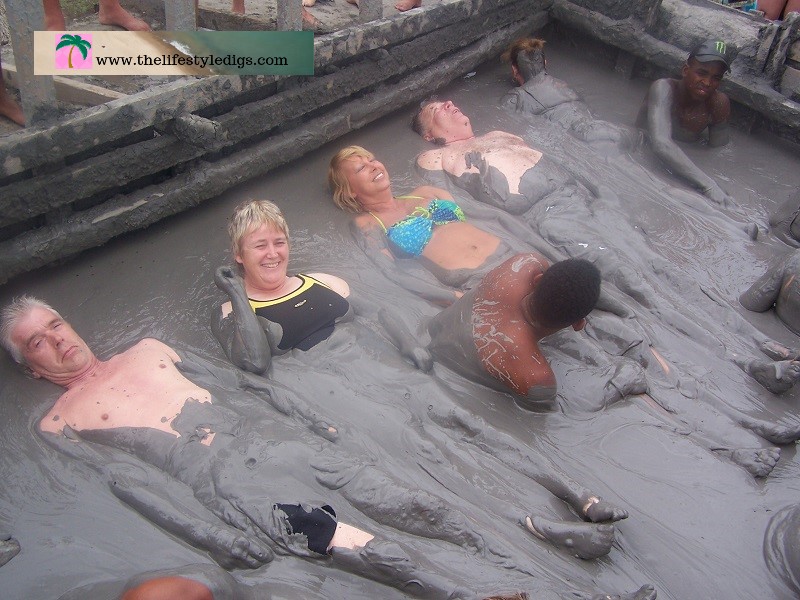 I flounder around and get mud all over me and into my hair before one of the men comes over to slather even more mud on me and give me a little massage. The mud is comfortably warm and very buoyant. You can’t sink in the stuff. It would be like trying to drown in a bowl of pudding! Its difficult to move around in the mud, but it was a lot of fun trying to get from one end to the other. Most of us were laughing and enjoying the experience. 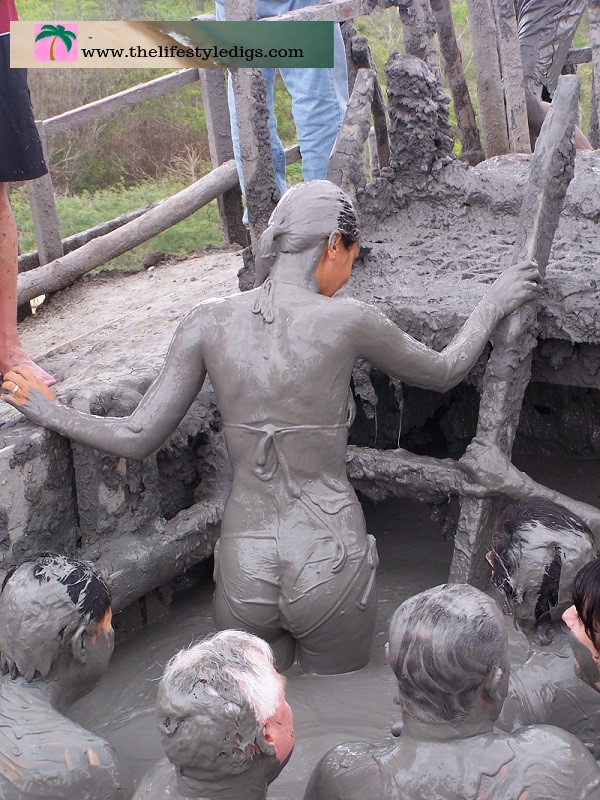 When we emerge at the ladder another village man is there to wipe off the excess mud. 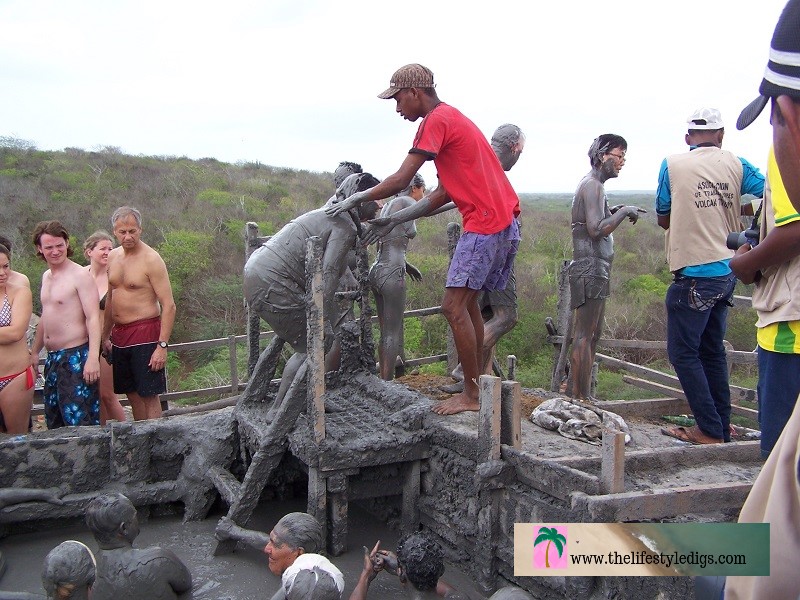 We walk down an even more rickety staircase, a little concerned because it’s steep and we’re covered in mud. One false move and you’d be sliding down that steep staircase on your ass! At the bottom of the steps is a gravel road that leads to the lake where we wash off. 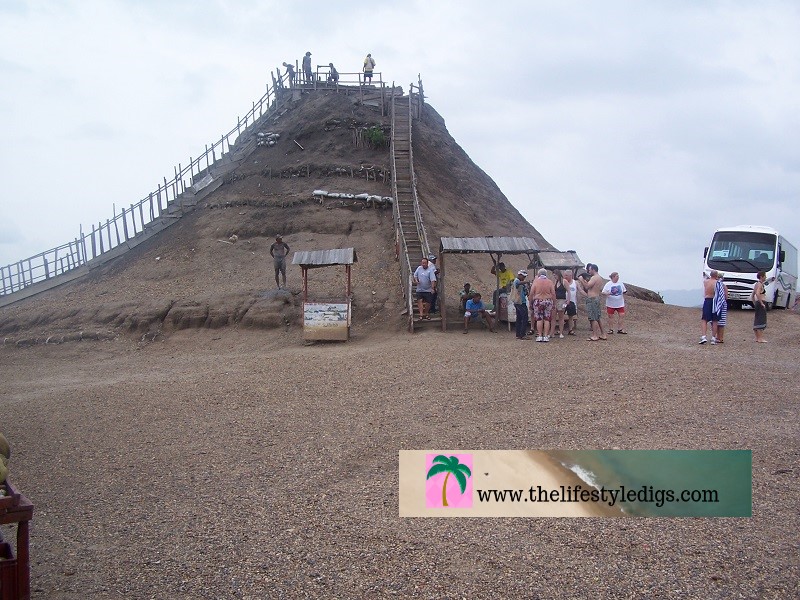 Good thing too because I have mud in places where I never thought I would ever have mud! It’s very hot in Colombia and the mud is drying on my skin within minutes of emerging from the volcano.

My shoes are nowhere in sight. Apparently the village women have taken the shoes and towels closer to the lake. I really wish I had my flip flops with me because that gravel path was ouch on my tootsies!

Cleaning off in the lake is a whole other interesting experience. There are village women in the lake to help wash the mud off. They’re really good at getting everyone clean. We go into water that is not very deep, maybe knee high and sit down and the ladies scrub away. The water itself is murky so you can’t really see beneath the surface. This is a good thing because now the women want us to remove our swimsuits so we can finish washing off our mud. While we do this, the women rinse out our swimsuits.

Let me tell you. Its no easy feat getting a wet swimsuit back on again underwater while trying to remain modest! Once I’m out of the water I collect my shoes and towel and go back to the bus to pull on my shirt and shorts. 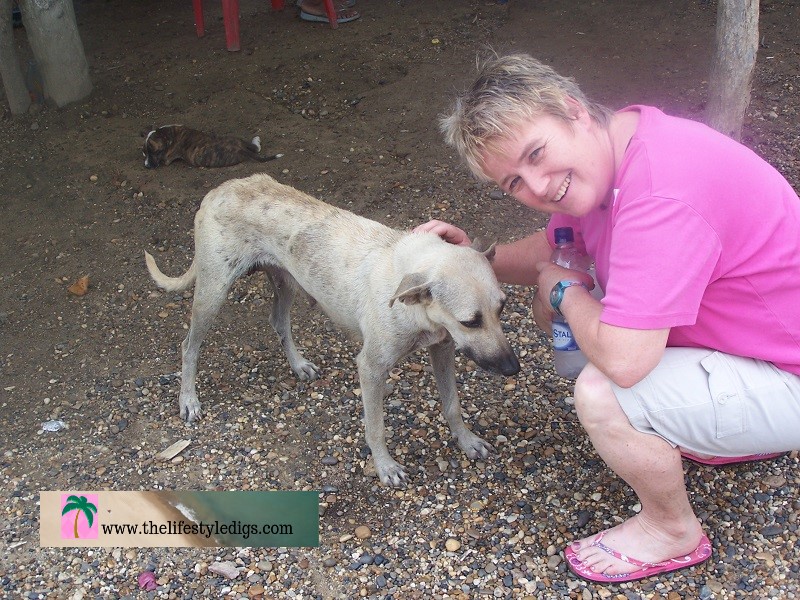 I walked around the village a bit waiting for the rest of our group to finish so we can leave. I see a dog and puppies and go over to pet them. The old lady sitting nearby tells me there are fifteen puppies and two mama dogs who had the puppies between them. Very cute, a little spotted, almost like some kind of weird Dalmatian cross. I want to take one home with me!

Back at the bus one of the ladies from our group is asking one of the village men for her husband’s watch and hearing aid, but he doesn’t understand English. And she doesn’t speak Spanish! Uh huh. A little communication problem going on. Her husband had forgotten to leave them in the bus, and at the top of the hill the villagers recommended he remove them. Take them in the mud and take your chances.

They’re not kidding. You do not take anything in that mud volcano of any value that you want to keep. If that mud sucks it off you, say goodbye to it forever. You’ll never find it in the mud again.

And before I forget, here’s a tip. Don’t wear your best swimsuit into the mud volcano. It’ll never look the same again! Seriously, bring an old swimsuit for this fun in the mud day.

Our tour guide was nowhere in sight, and I speak enough Spanish to ask about a watch, but I haven’t the slightest idea how to say hearing aid in Spanish. So I told the fellow I didn’t know the word but it’s a thing that you put in the ear in order to hear. He pulled two watches out of one pocket and the woman pointed to the one that belonged to her husband. Then he reached into his other pocket and pulled out the hearing aid. Eeeuuww.

I forgot to ask the lady how she knew this particular man was holding on to those items. He was just standing there leaning against a hut, looking really bored. I don’t remember seeing him at the top of the volcano. Oh well. At least I helped her get them back.

The man who’d been taking photos with my camera had already came back down the hill. Thus, the dog photos! And here I want to say to the camera guy – way to go! He’s got a bunch of cameras around his neck and he’s still able to figure out the mud-covered person who gave it to him and take their picture. And he took pretty decent pictures.

Just before the bus leaves, one of the village women comes aboard with a basket and walks down the aisle collecting tips. Bernardo had recommended $5 per person would be reasonable. 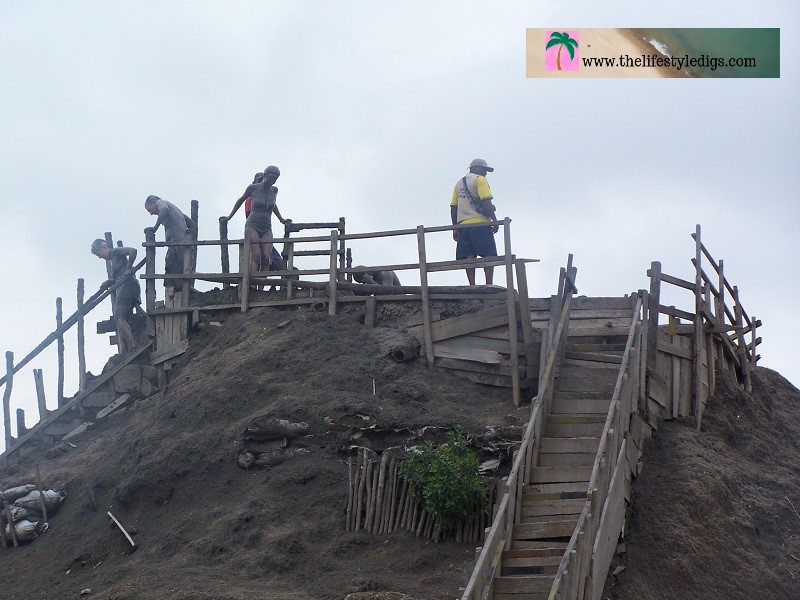 If you are a geocacher, the Totumo Mud Bath Volcano is an earth cache called Go Play in the Mud. Don’t forget to bring your GPS and take a photo of yourself in front of the volcano to prove you were there.

Three years ago I was thrilled to see the Totumo Mud Volcano featured on an episode of the Amazing Race. The contestants had to find a bag with an emerald in it in the mud. They also had to climb down the ladder about 20 feet to get into the mud. As you can see from the photos, the mud is not that far of a drop. Apparently the mud volcano is tidal, though that might not be the correct term. The level fluctuates depending on the thermal activity.

The Totumo Mud Bath Volcano was about the most fun I’ve ever had on a cruise ship excursion. And absolutely I’d do it again.