Skip to content
Cheryl at The Lifestyle DigsJune 16, 2019 Travel No Comments 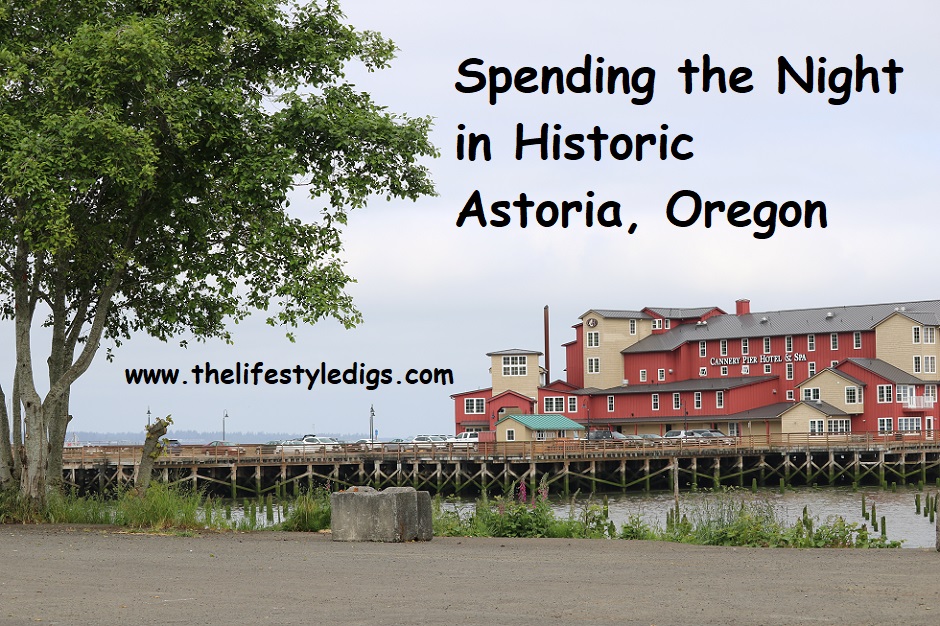 The first time I was in Astoria, Oregon was when my aunt and uncle from London came for a visit in 1997. Well, at least it’s the first time I remember! It’s possible I’d been through Astoria on a camping trip to the Oregon Coast when I was in my teens. All I remember from that trip is visiting the Sea Lion Caves and a campsite on the beach that was very windy.

I don’t remember a lot about the 1997 trip either! No, it has nothing to do with me being a drinker! I’m more of a Dr. Pepper and iced tea person. I rarely drink. It’s just time fading the memories.

Anyway, let’s fast forward to my Oregon vacation in September, 2018. I’d programmed a couple of places I wanted to see in Astoria, but it was around 4:30pm when I drove across the 4 mile bridge into Oregon. I wanted to eat fish and ships in Seaside where I was staying the night, about a 20 or 25 minute drive from Astoria. Bell Buoy of Seaside closes at 5:30, so I had to keep going to check into my motel and get dinner.

Let’s fast forward again. Late May, 2019. Last minute decision to drive down to Oregon for a few days. This time I wanted to poke around Astoria.

Whenever I read something about Astoria, Oregon, it often uses the word “historic” to describe the town. Which begs the question – what makes Astoria “historic”?

Astoria, Oregon is where the Columbia River meets the Pacific Ocean, and is the oldest settlement west of the Rockies. Founded in 1811, it’s the oldest city in Oregon. The town is named after John Jacob Astor. Interestingly, according to this plaque, he never set foot in Astoria. 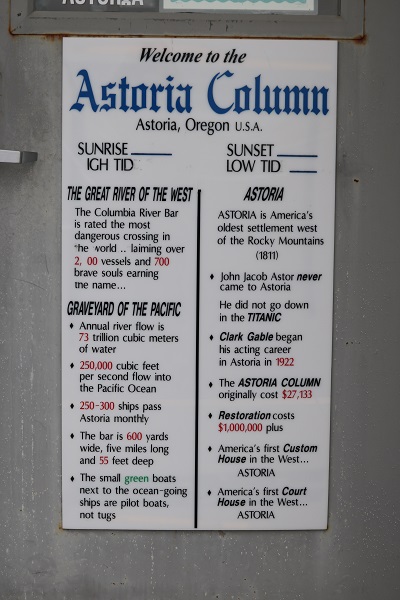 Astoria is in northwest Oregon and started off life when Astor’s American Fur Company settled here and named the area Fort Astoria. The town is also known for fishing, canneries, and lumber. The canneries have closed down, and many of the old buildings have been turned into restaurants and shops. The lumber mill also shut down. These days tourism is a main source of income, though fishing and lumber still have a presence on a smaller scale. Cruise ships stop here while repositioning between California and Seattle or Vancouver for the Alaska cruise season. Tourists come to town to wander the old downtown district, check out the museums, take pictures of the Victorian era houses built on the hillside, and enjoy the craft brewing scene that’s part of Astoria.

I always arrive in Astoria via the 4 mile bridge from southwest Washington. How fun is that? Beats driving through Portland traffic and then heading to the coast! 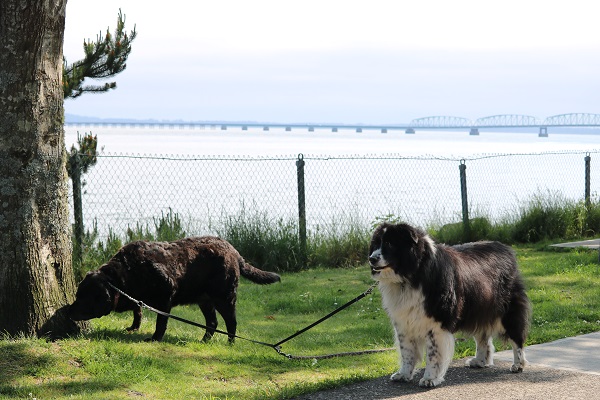 There’s a rest stop a couple of miles from the bridge. Great views of Astoria, the bridge, and the Columbia River from here. 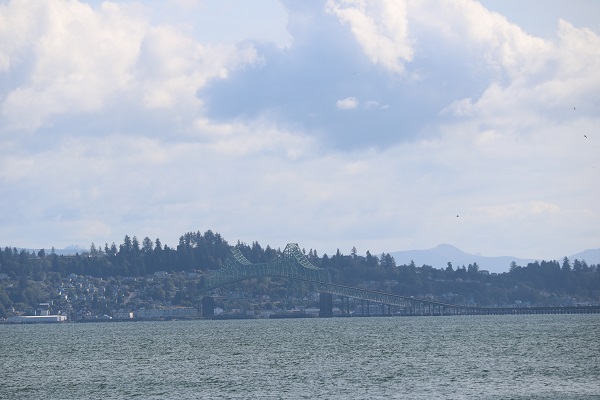 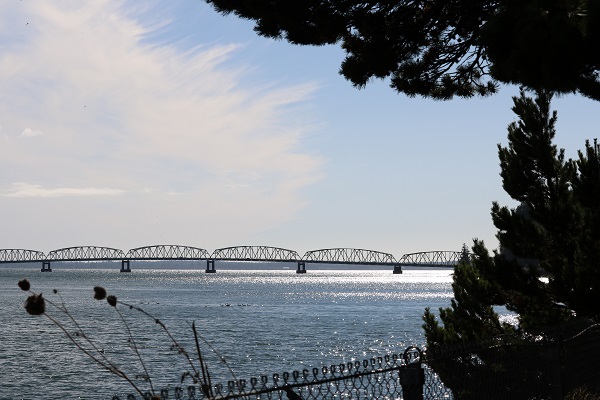 Here’s a shot of it from the Astoria side, tallest spot in town. Kind of a gloomy shot where it looks like the bridge is disappearing into the Columbia River instead of connecting with Washington. 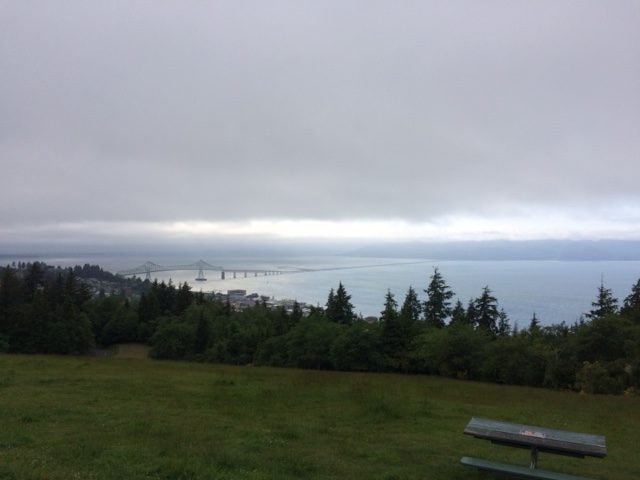 And here’s a shot looking up at the bridge. 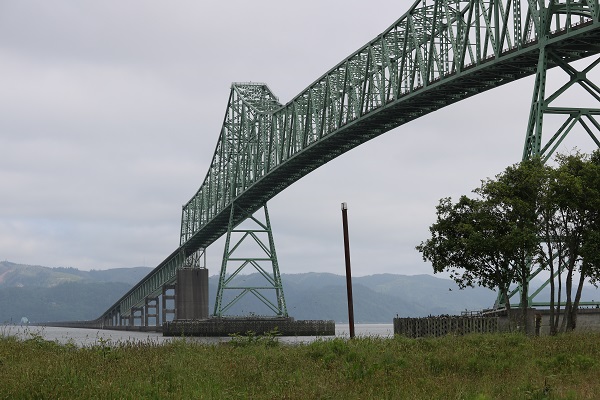 Once again, I booked a night at a Motel 6. Comes in so handy when traveling with dogs! It really annoys me that hotels make a cash grab out of charging extra for pets. OK there might be a little more vacuuming due to pet hair, but I sure hope housekeeping was planning to vacuum anyway between guests! Very easy to reach the Astoria Motel 6. Marine Drive is the main drag through town and the Astoria Bridge is behind it. 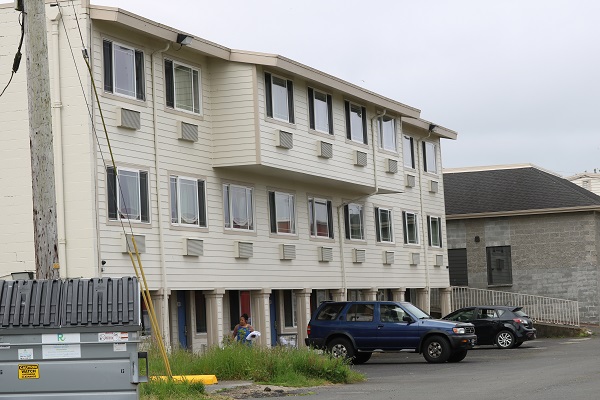 It’s a rather interesting design with 3 stories. Most Motel 6 are two story buildings, because they’re walk up to the 2nd floor. When you drive in to the parking lot and where the office is, it looks like a 2 story building. But there’s a little driveway between the motel and the next building which was home to an indoor pool. This driveway leads to the “basement” of the Astoria Motel 6 where there are about 10 rooms. That’s my black car in the background of the above photo! The window’s down. I think Chica was inside. Shadow was probably walking with me while I took photos.

The upper 2 floors would have a good view of the Columbia River. For the bottom floor where I stayed, it’s straight across to the river. The Riverfront Walk and Maritime Memorial Park are just steps away. 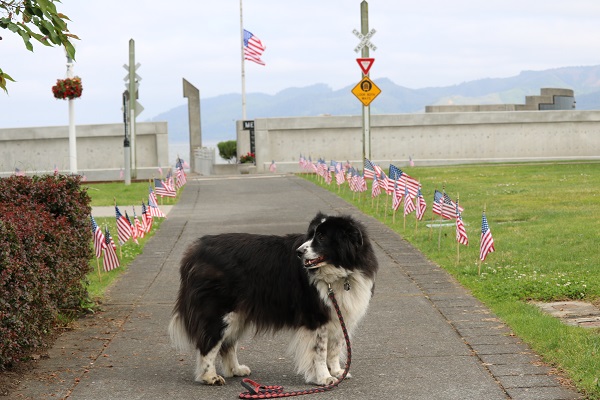 The American flag is at half mast and there are flags lining the sidewalk. I’m not sure if it’s always like this. We visited on Thursday, May 30, 2019. Memorial Day was Monday, May 27, so it could have been celebrating that day. There are a lot of names on the walls, many who died at sea. This photo is only one wall of names. Sadly, there are a few more plaque-filled walls. 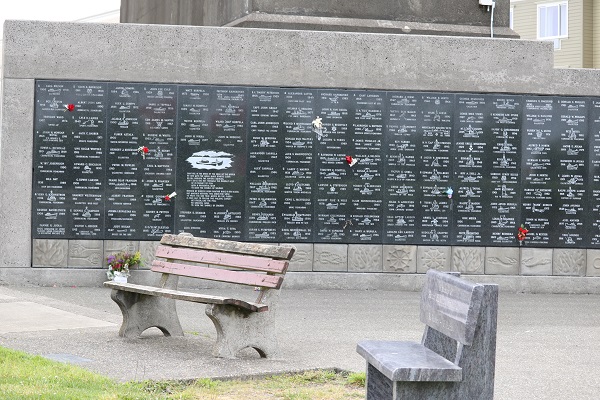 Great timing on my part seeing the trolley! I don’t believe it was in operation on Friday, so the two fellows must have been doing a mechanical check. It’s $1 to ride and there are several places along the river walk where the trolley stops to pick up passengers. I believe the trolley goes about 3 miles down the track and then returns. 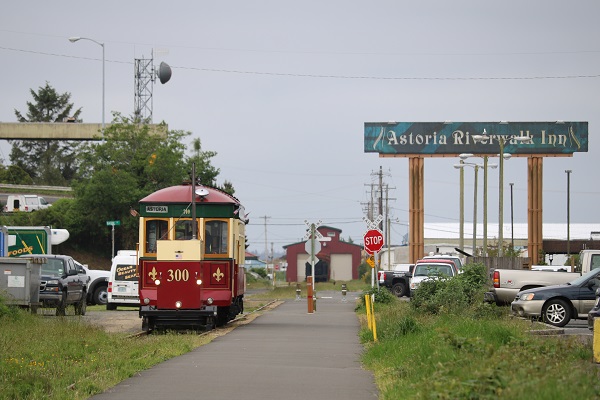 Last year I came across an article about the best seafood dives in Oregon. The thing with dive restaurants is that they usually serve good food, big portions, and low prices.  Bowpicker is on the list, but when I drove through town last year I was spending the night in Seaside, about 25 minutes away, and had already planned to eat fish and chips at Buoy’s Best Restaurant. This time I spent the night in Astoria and decided to check out Bowpicker. They serve Albacore tuna. What an interesting change from the cod or halibut most fish and chips places sell! 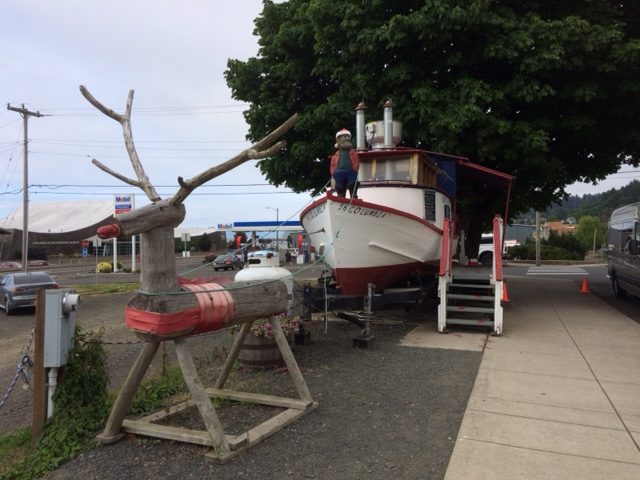 The restaurant is more like a food truck. It’s an old bowpicker boat converted into a kitchen. It’s not wheelchair friendly. You walk up a short flight of stairs to place your order. Pay for it and walk down stairs on the other side. 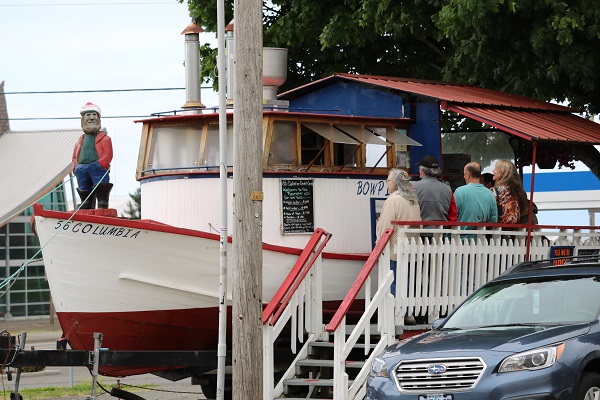 They sell fish and chips until they run out and then they close for the day. They’re cash only. I got the half order – 3 pieces of fish for $9. 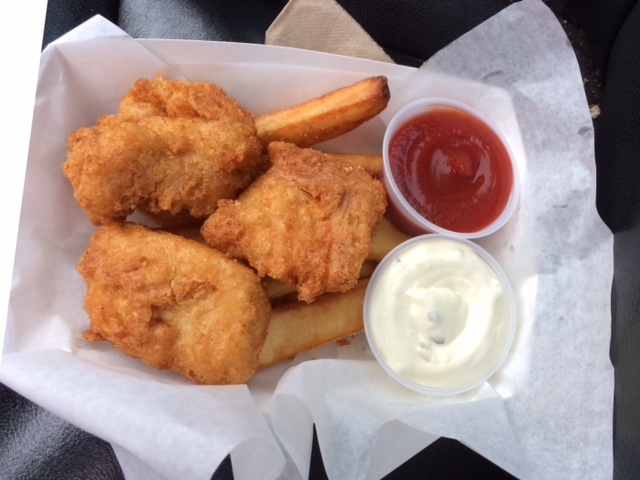 I thought it was a little high priced for what you get, but it must be the going market rate seeing how Bowpicker is a popular restaurant for locals. The pieces of fish aren’t too big, you can compare them against the containers of ketchup and tartar sauce and see they’re only a little bigger. There were only a few french fries. They were big fries, but only a handful of them. Overall, not a bad choice for someone like me who’s always working on portion control.

Delicious! Amazing! The tuna was firm and thick, the batter was light, not greasy, and the thick cut fries were perfect. I’ll definitely be back the next time I’m coming through Astoria!

What better way to work off the fish and chips I had for dinner than to climb the Astoria Column? 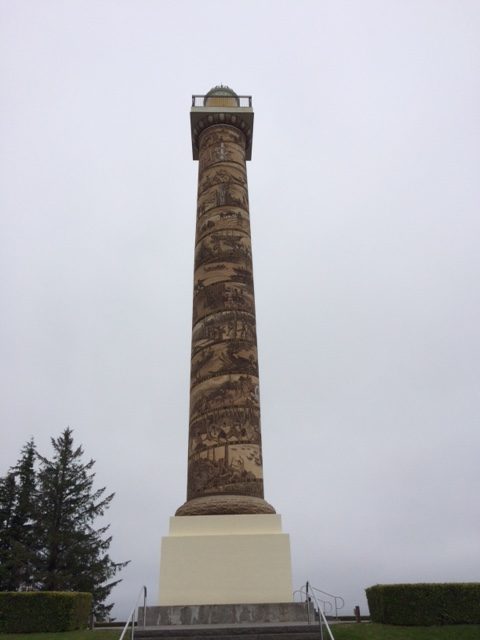 It costs $5 to park and no extra charge to climb the column, that’s open until 10pm. I was probably there a bit after 6pm. There’s a large parking area, a gift shop, and restrooms. Everyone comes up here for the views. You can see the town of Astoria, mountains, the Columbia River, Youngs Bay, the Astoria-Megler Bridge between Washington and Oregon, and the Youngs Bay Bridge that heads south on Highway 101 down the Oregon Coast. 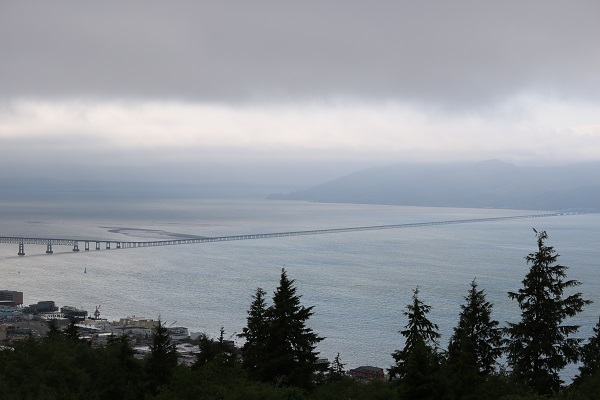 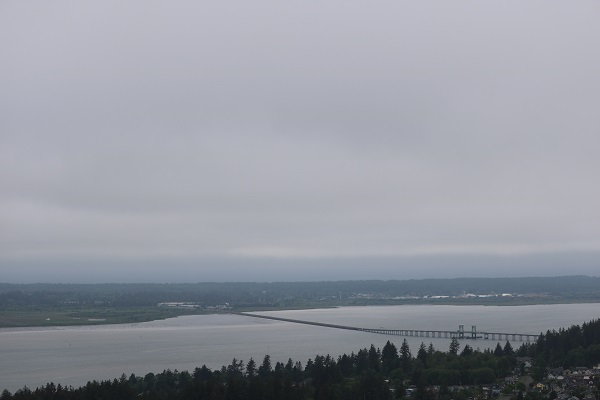 There’s a spiral staircase that goes to the top. Fortunately, I’m in good enough shape that the steps didn’t slow me down too much. Good workout! I could hear people below me ascending. They were counting the stairs. I think they said 167. A doorway leads to a small balcony area that wraps around the column. The views up here are amazing. There was a cold wind blowing. Brrrr! 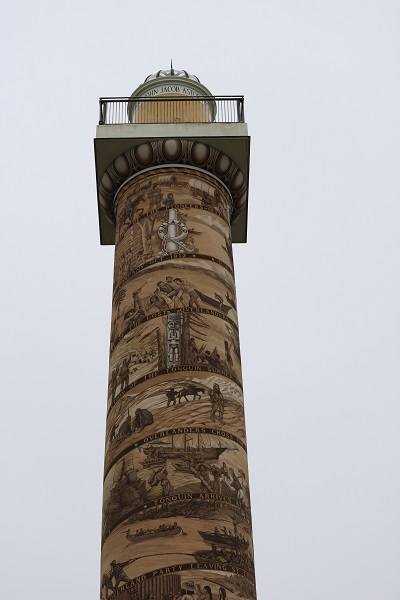 While the other couple and I were trying to find a place up top where the wind wasn’t slapping us, a rather odd incident occurred. A man who appeared to be about 30 years old emerged from the stairwell, singing. And carrying a golf club! What the hell! Who walks up a high spiral staircase with a golf club? Was he planning to chip a couple of balls up here or was he planning to use it as a weapon? Creepy!

Let me tell you, I was the first one to head back down that spiral staircase! The other couple were seconds behind me.

The rest of the park is nicely landscaped, and there are still great views wandering around here if you’re not up to walking up to the top of the Astoria Column. There’s a plaque dedicated to Lewis and Clark Expedition and a boat similar to what they would have used in their quest for the Pacific Ocean.

I’ve uploaded a video of the photos I took around Astoria, Oregon. Enjoy!