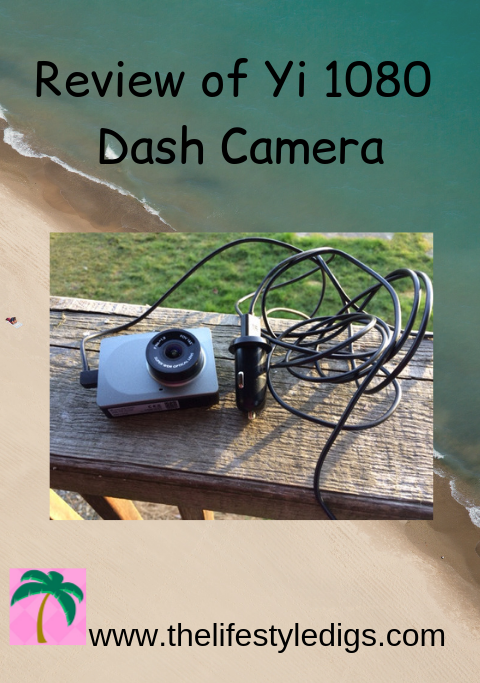 A little-known fact about me is that sometimes I like watching car crash compilation videos on YouTube. Not that I want to see anyone get hurt! It’s just a weird fascination that I can’t stop watching.

Forget the horrors of being in a car crash. Clearly many of the people who witnessed the crashes, including the person who’s dash camera is taping it, drive right on by. They don’t stop to see if anyone is hurt and if assistance is needed. They don’t stop to say, hey I saw what happened, and leave their name and number if a witness is needed. And more importantly, with the driver whose dash cam recorded the accident, why not stop and say they have a video that might help with an insurance claim.

I want to buy a dash camera

I decide on a dash camera!

Boxing Day, December 26 for those of you who aren’t in Canada, is a big day for sales, and I noticed Yi had a dash cam for sale on Amazon at $46. I checked out some reviews and watched the dash camera in action on YouTube. I liked the Wifi feature to be able to playback recordings on my phone. That could be handy if I recorded an accident and needed to email the video to someone right away.

A complaint that many reviewers mention has to do with the suction cup and they recommended to buy a different suction cup to use with the camera. There were a lot of complaints that the Yi dash camera doesn’t work in cold weather. I live in a mild climate, so I didn’t think that would end up being a problem for me.

I thought about it for a couple of hours and then I bought the Yi dash camera.

My camera arrived pretty quickly. Within the week.

I’d also bought a separate suction cup, actually a two pack, because reviewers were saying that they didn’t like the suction cup that came with the Yi dash camera. The one that comes with the Yi dash cam has 3m tape, so you have to be pretty sure you like the spot where you stick it, or you’ll end up searching the Internet for how to remove a 3m suction cup from your windshield. Amazon had recommended suction cups and a mini SD disk at the time of purchase, so I added them to my cart.

I followed instructions I found online to set up the camera while it was plugged into my computer for power. There were a couple of issues, mostly the back and forward arrows weren’t working but I was still able to set the time and date.

The Yi dash camera is supposed to turn on automatically when I start my car. It was plugged into my car’s cigarette lighter and didn’t come on when I turned the key. The camera has a power on/off button and when I pressed that, the Yi dash cam turned on.

After driving for 6 or 7 minutes, the Yi dash camera turned off. I pushed the power button and it came on again. For about two seconds. Pushing the on/off button multiple times achieved the same results, until I finally figured out that the Yi dash camera was operating under it’s internal battery that had charged up when it was plugged into my computer. Thinking there might be something wrong with my car’s cigarette lighter, I plugged the Yi dash cam into the portal inside my center console.

It didn’t turn on.

At this point I was wondering if I had a blown fuse or something. When I got home, I grabbed my GPS, plugged it into the cigarette lighter and it turned on when I started the car. I checked the GPS in the center console and it also worked as it should, so I ruled out anything with my car affecting the operation of the Yi dash cam.

Obviously, I had a defective dash camera and needed to exchange it for one that worked. I logged onto Amazon, pulled up my order, and attempted to request an exchange but that option didn’t come up on the web page. All I was getting was an option to return it for refund. I didn’t want my money back, I just wanted a camera that worked, so I phoned Amazon. The rep confirmed that Amazon could not exchange the Yi dash camera. All they could offer was a refund.

Then I could buy it again.

That sucks! After all, I’d bought it on sale at a good price on Boxing Day. I’d have to pay the higher price if I took that route. I might as well look at buying a different dash camera.

The Amazon rep was sympathetic that I didn’t want to buy the Yi dash camera again because it meant a higher price tag. She suggested I contact the vendor directly because apparently Yi has a decent rating with Amazon. The rep emailed me the contact information for Yi – a phone number and email. When I phoned Yi, I got a recording saying they were closed on Sunday, so I sent an email. On Tuesday, I received a response from Yi that they’d do an exchange and asked to verify my address, which I did, following their instructions on how to reply to them.

Three days later I received an email from Yi saying they hadn’t heard from me and would be closing the ticket in two days. I phoned Yi, got their answering machine, and left a message. A couple of hours later a woman phoned me back and said they’d mailed me a replacement camera on Tuesday.

A couple of days later I received an email from Yi saying they’d closed my ticket. No problem, I figured everything had been taken care of. As the weeks went past and no dash camera showed up, I finally figured out that Yi had lied to me.

I hate dealing with disreputable companies!

Running out of time, I had one week to go with Amazon to still be eligible for a refund, so I went ahead and started that process. This meant I also had to get a refund on the extra suction cups I’d purchased. Amazon sent me a return label and told me to send the items within the week and I’d get a refund less $4.59 for the label.

Wonderful. I get a piece of shit Yi dash camera and I have to pay for return shipping. I’m losing money and none of this if my fault. All I want is a camera that works.

And I realize it’s just my bad luck that I got a defective camera. These things happen.

The lesson this experience has taught me is to NEVER buy any product manufactured by Yi. This company does not stand behind their products. They lie to customers. They have no interest in making things right.

If you’re looking for a recommendation on a decently priced dash camera – one that actually works! – I bought the Akaso D2000. It’s pretty much take it out of the box, plug it into the cigarette lighter, and it’s ready to record. Yeah, I mean ready. I turn my car on and the Akaso dash cam turns on just as it should. The only thing I had to do was change the time and date. The settings are much easier to adjust than the Yi dash cam. Unfortunately the Akaso doesn’t have Wifi. On the other hand, even though the Yi dash cam has Wifi, what good is that feature when the camera doesn’t work?

Disclosure: if you click on the links below, you’ll be taken to Amazon. If you make a purchase, I’ll receive a small commission for the referral.

If you’re interested in buying an Akaso dash cam, the D2000 doesn’t seem to be available in the states. The closest is the C200. They look very similar. It’s a great price, less than what I paid. Below it is the link to the Akaso D2000 that’s for sale with Amazon Canada.

During the few minutes my Yi dash cam was recording under its own internal battery, I managed to get video of a car making an illegal left hand turn over two solid yellow lines. This is a big problem on this stretch of street. You’d think the RCMP would wait in that parking lot and write up tickets. They’d reach their quota in no time. The Yi dash cam powered down seconds after I recorded this and never worked again. I mean really. What good is a dash cam that you have to plug into your computer to charge it and then it only records for about 6 minutes before running out of power?

I didn’t actually see the traffic accident happen, but I drove past minutes later and the Akaso was recording. At first I thought a car had stalled in the intersection and some nice guy was coming across the street to help the person push it out of the way. Then I saw a white car that was banged up. It didn’t look like any more help was needed. The people were out of the cars exchanging information, and I suppose that was a witness who was helping out, not a car pusher.

I think the Akaso D2000 has a sharper video picture than the YI, though the YI dash camera is still pretty decent quality especially for the price point. I’d have been happy with it if this dash camera actually worked.

About two weeks after I got my Akaso camera, I caught a car crash. Yikes! I was nearly in the car crash. At the last moment I spotted the car that was running the red light and slammed my brakes on. The driver beside me not so lucky. Horrifying because on the same highway, a couple of miles up, I was in a serious car crash in March, 2008 thanks to a new driver running a red light.

Final words on my review of the Yi dash camera

It really, really, REALLY irks me that it ended up costing me money to own the piece of shit defective Yi dash cam for a few weeks.

If you live in a climate where below freezing temperatures are normal, the Yi dash cam is not for you.

If you don’t like dealing with a company that doesn’t stand behind its products, the Yi dash cam is not for you.

If you don’t like dealing with a company where the employees lie to you and dick you around long enough that you’ll run out of time to be eligible for a refund, the Yi dash cam is not for you.

If you hate feeling ripped off, the Yi dash cam is not for you.

Don’t waste your money buying a Yi dash camera. It might even end up costing you money.

If it happened to me, it could happen to you.

Let’s be smart with our money, ladies. And you too, guys (don’t want you to feel left out!). Take your business to a company that provides good customer support in case things go wrong.