Home Living At Home... Potato Salad for One 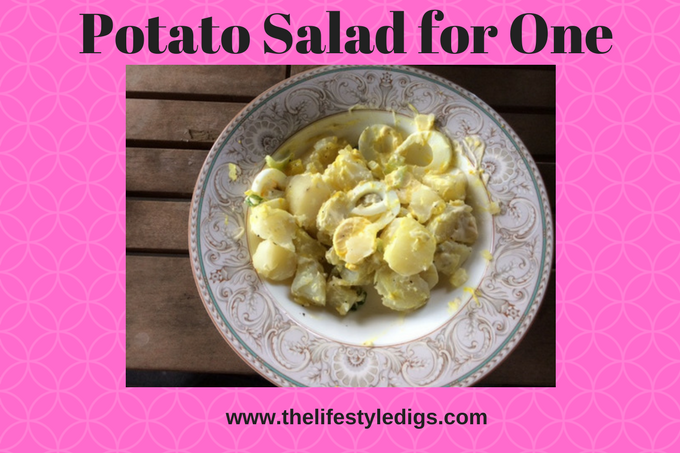 I used to make potato salad a lot. I had a big serving bowl for it, plenty for everyone. And then it was only myself to cook for, and potato salad fell through the cracks, because there was too much for one person to eat and leftovers would be blah. Maybe not even healthy because of the mayonnaise and egg. And then it struck me. It was so easy, why didn’t I think about it 2 or 3 years ago. I can scale back the recipe and make potato salad for one.

I won’t bore you with a bunch of before photos of potatoes and celery. Everyone knows what those look like. Your ingredient list is: potatoes, egg, celery, green onion, pickle, mayonnaise, mustard, and pepper.

Now I’m the type of cook that if I have it in the house – great! If not, I’ll either substitute or omit. Let me give you an example of how you can do this too. If you don’t have a pickle, but you have green relish, you could use a teaspoon of that instead. If you don’t have mustard – don’t sweat it. It gives the potato salad a bit of yellow color. And here’s a confession, I don’t always have mustard in my fridge. If you have a different type of seasoning you prefer instead of pepper – go for it!

You know what it’s like when you buy a 5 or 10 pound bag of potatoes. They come in all sizes. I like the large ones for baked potatoes, but the smaller spuds don’t satisfy me when they’re baked. Guess what? The potato salad for one helps you use up those smaller potatoes.

The toughest thing about this potato salad recipe is you have to think ahead and give the potatoes and egg time to cool down. Start cooking a couple of hours before you plan to eat, or boil the potatoes the night before and put them in the fridge.

Take 2 small to medium sized potatoes. Scrub them and cut them into quarters or sixths.

Fill a pot with water. Add a little salt. I use no more than half a teaspoon, but I’m not a big salt person. Drop the potatoes in the pot and put the lid on it. Turn it to high heat and bring to a boil. Lower the heat, so its still boiling or simmering, medium to medium low, keep the lid on, and set the timer for 15 minutes.

Now we can all multi-task. As soon as those potatoes are put on the stove waiting to boil, fill another pot with water, add one egg, and bring to a boil.

If you’re lucky the potatoes and egg will come to a boil around the same time.

That’s because when the egg comes to a boil, turn off the heat and let it sit for 15 minutes.

One thing at a time. When the timer goes off, dump the potatoes into a strainer and set them aside to cool.

As for the egg, pour out the boiling water, keep pot in sink, and run cold water over it for a couple of minutes. Some people even add ice cubes, but I don’t do that and my hard boiled eggs always turn out just fine. Let the egg sit in the cold water for awhile before cracking it open.

Tip: bang the egg on the counter to crack it, and roll it between your hands so the shell starts to loosen. If it’s still not easy to peel the shell off, run it under cold water to peel.

If you want eggs that are super easy to peel, you need to make hard boiled eggs in the Instant Pot.

Once the potatoes are cool enough to handle, pull the skin off.

If you have dogs – they’ll love to eat the potato skins!

Put potatoes and egg into a bowl and put it into the fridge for at least half an hour to chill.

When you’re ready to put the salad together, eyeball the potatoes and decide if you want to cut them into smaller cubes. Slice the egg and put it on top of the potatoes.

Get a stalk of celery, and here you’ll use the eyeball method. Unless you really love celery, that stalk is probably too big to use for an entire potato salad for one. Thinly slice 2 to 3 inches of it and put it in the bowl with the potatoes and egg.

You may be asking yourself, now what am I supposed to do with the rest of that celery stalk? Get out Cheez Whiz or peanut butter, slather it on the celery, and put it aside to eat with your potato salad.

Back to the potato salad for one.

Snap off a piece of the green onion and using a knife or scissors, chop it onto the potato salad. Again, to taste, or eyeball. I don’t want too much green onion or it will overpower the salad. Maybe 10 or so snippets of green onion.

If you’re looking at the rest of that green onion and wondering what to do with it, put it on the plate with the stuffed celery to eat with your meal. Or nibble on it while you’re preparing the potato salad for one.

I like lemon pepper, so I’ll sprinkle that over everything. Use a seasoning of your choice.

If I have mustard, I’ll squirt a little on the potato salad. Not too much. Again, you don’t want the mustard to overpower the potato salad for one. I probably use half a teaspoon or so.

Then add a dollop of mayonnaise to the potato salad for one. Enough to hold it all together when you mix it, which is what you’re going to do now.

I put the potato salad for one back into the fridge for a bit to let the flavors meld together and to chill it a bit. How long it stays there depends on my willpower. 10 minutes? Half an hour?

If I have a tomato in the house, I’ll slice it, or half of it, and put it on a plate. If I didn’t eat the rest of that green onion, I’ll pour a little salad oil over the two of them to enjoy with my potato salad for one. And if you didn’t already eat the stuffed celery, that also becomes part of the meal.

And there you have it. If you’re a single who’s missing out on potato salad because the recipe serves 4, 5, or 6, try this potato salad for one.

I bet you’ll love it so much you’ll make it the next day too!

How do you like to fix your potato salad?