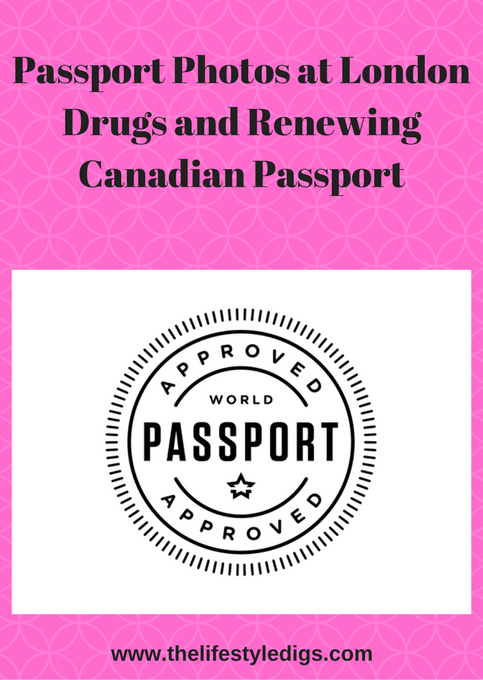 It’s 5 years to the month, and I have to renew my Canadian passport. The first thing I have to do is get my photo taken for the passport.

Where do I go?

London Drugs has a photo department in their stores, run by what I hope to be staff knowledgeable in cameras and printing photos. They have several kiosks where customers can insert a disk or download photos from their phones and have them printed. The London Drugs staff are very helpful at assisting customers. I’m assuming the staff who work in this department have an interest in photography and can take a good passport photo. London Drugs uses a new biometric technology to ensure the passport photos pass Passport Canada’s high standards. They offer a $50 guarantee if the passport photo is declined, will refund the customer’s money, and take a new photo. You can’t go wrong with that deal! The cost of 2 passport photos at London Drugs is $11.99 plus tax as of August, 2017.

The lady at London Drugs was very efficient, even pushing my bangs off my eyebrows. She said Passport Canada requires all facial features to be seen so she wanted to make sure the photos wouldn’t reject because my bangs were covering my eyebrows. I was surprised that passport photos must now be in colour for a Canadian passport. In the past my photos have been black and white.

While I was paying for my photos, a man came up and asked one of the other staff to have his passport photo taken, so obviously London Drugs is an excellent choice for a passport photo for people who live in British Columbia.

I thought about scanning my passport photo for this blog post, but I didn’t think about it until I was in the waiting room at Passport Canada. Duh! I took a quick photo with my phone which caught the glare of the overhead fluorescent lights, but at least I should sleep well knowing no one can steal this photo! 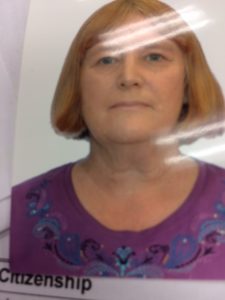 I’ve had my own passport since I was a teenager, and over the years the renewal process meant getting a guarantor to sign the passport application, and usually the guarantor had to be a professional such as a doctor, lawyer, or accountant. About 15 years ago Passport Canada changed the policy for people renewing a Canadian passport and no longer needed a guarantor, but we still need to put down the names of two people as references.

The last time I renewed my passport it cost $75 and is good for 5 years. About a year after I renewed, Passport Canada came up with the option of 5 year or 10 year renewal. Darn! I just missed that one! I wasn’t going to let it pass by again. A 5 year renewal on a Canadian passport costs $120 and 10 years is $160.

Click here for more information on renewing a Canadian passport.

To apply for a Canadian passport, we can either mail in the application and photos, drop them off at a Service Canada location (who don’t verify anything), or go to a Passport Canada office. It all depends on how much of a hurry you’re in. Passport Canada is the fastest and for extra fees a passport can be expedited.

In the past when applying for a passport you either had to drop off your application or pick up your passport in person so the staff could ensure the passport and person matched. I’m not so sure that’s done anymore, but passports can still be picked up from Passport Canada.

I thought about going to a Service Canada office because it’d be faster, but if I’d missed something on my application or my photos weren’t up to snuff, I’d be facing a delay and have to go back and do it all over again. I decided to bite the bullet and go to the Passport Canada office in Surrey. I was last there 5 years ago to renew my passport. On that day in August 2012 there were only a handful of people in the room.

Fast forward to August 2017. There was a large line up of people. There were 2 lines: people applying for their passport and people picking up their passport. Both lines moved slowly. It took 20 minutes before I got up to an information agent. This person didn’t verify my information. She simply checked that I had everything I needed to proceed, and then gave me a ticket stub and told me to wait until my number came up on the board. From there I sat on a chair in the large waiting room with about 200 others and watched the numbers that would direct us to a window. I was D987. I saw D977 had been called and you’d think I was 10 people away. But no, many number sequences started with A or C. People were categorized based on renewing a Canadian passport or if they were getting their first Canadian passport, and probably further categorized by whether or not they were born in Canada. Seeing as how I was born in Vancouver, BC I was hoping my passport renewal would go smoothly.

The first thing I noticed, or rather heard, was the couple sitting behind me, a couple of whiners. The target of their anger was the staff person sitting in window 20 who didn’t have a customer, which this couple loudly complained about every minute: “They still don’t have anyone.”

There are all kinds of reasons a staff member doesn’t have a client standing in front of them. They might have just finished up with a difficult passport application and had to do a lot more computer work after the client left.

I was sitting very close to a window and overheard much of the conversation between the Canada Passport staff member and a client, for close to 30 minutes. This is why there are such huge waits at Passport Canada offices! The man was not born in Canada, and it’s unknown to me if he was applying for his first Canadian passport. The woman patiently explained to him over and over the documents he was missing, a letter he required, and told him the passport photos were rejected because there was a shadow. I heard her tell the man he’d have to return to Staples and get the photos retaken.

That caused me to check out the Staples website for passport information when I got home. Staples charges $14 for 2 passport photos and also guarantees them, so they’ll retake them at no extra charge if Passport Canada rejects them.

No money back guarantee the way London Drugs does!

These two stores are very different. London Drugs has a dedicated photo department that is probably staffed with people who are interested in photography and have camera experience and are well trained with this biometric technology that is operated through an iPad. Staples is an office supply store and the staff are paid close to minimum wage. I know this because my former tenant worked there for a year or so. These are cashier and customer service jobs. It might just be a fluke that someone who’s a good photographer actually happens to be working when a person comes in for passport photos, and is paying attention to detail.

Staples wasn’t even on my radar when I started thinking about getting my passport photos taken. I didn’t know they offered this service until I heard the Passport Canada staffer reject them.

Verdict? If you live in British Columbia and need passport photos, you can’t go wrong with London Drugs!

Finally my number is called! I go up to the window and it’s a fairly quick process, no more than 5 minutes. I use my debit card to pay and the lady tells me my passport will be sent by registered mail in around 2 weeks. See you again in 10 years!

It took me about one hour.

Do you have any passport stories you’d like to share? What about getting your passport photos taken? Let’s hear your horror stories and tips!