Home Living My Car has Gremlins 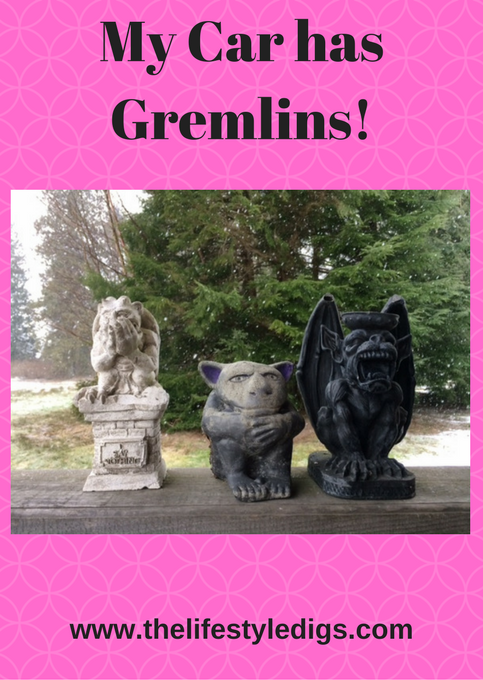 The car I owned when my ex and I split up was a 2003 Chrysler PT Cruiser that I’d purchased in 2011. I called it my gangster car. It had those famous leaky Chrysler rims. It started out with one tire and eventually two more joined the party. That meant three tires needed to have the air checked before driving anywhere. Two of the tires were pretty bad, losing about half their air pressure overnight. There’s nothing that can be done about the leaky rims other than buying a new set where I was quoted $200 each. Yikes! That’s a lot of money for an older car, especially when I can top up the air before driving for free. My mechanic had someone who could pound out the rims, but it would take two days and cost about the same amount of money as replacing them.

I can’t go two days without a car. The public transport where I live sucks. 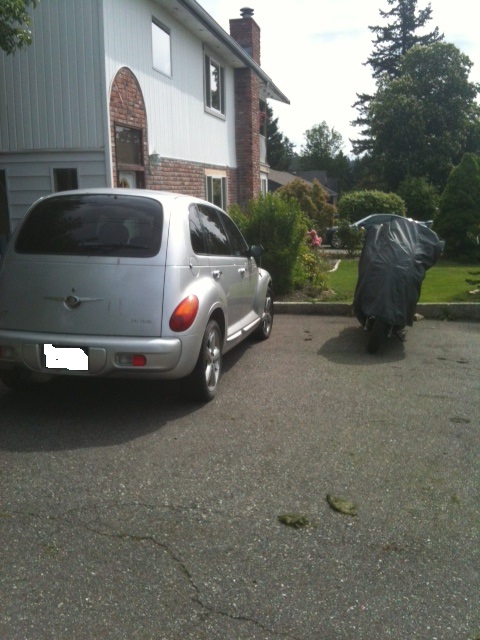 Over the last couple of years I think I’ve gone through three portable air compressors, the kind that plug into the cigarette lighter to operate. My landlord has a big air compressor in the barn near where I park my car and I was able to fill my tires quickly using that.

Other than having to constantly check the tire pressure and refill air, the car ran pretty good and I kept it well maintained.

Until one day in July, 2016. The Cruiser stalled on me while I was waiting at a red light and I didn’t notice. When the light changed, the car was dead and wouldn’t restart. It sounded like the engine was flooded. It just kept cranking over but wouldn’t catch. The car hadn’t done anything weird prior to stalling. Fortunately, there were two lanes of traffic, and I was beside the right-hand turn lane, so cars were able to get around me. I phoned BCAA (same thing as AAA just province specific) and they said there was about a one hour wait for a tow truck, but seeing as how I was blocking traffic they’d try to speed it up. After about 10 minutes, and in conjunction with a green light, I tried to start the car and luckily it fired up and away we went. I was shaking the whole drive home, about 5 more minutes, but I got home safely and the car didn’t do anything unusual.

I called my mechanic when I got home and he asked me a few questions and said it sounded like the fuel filter except for the fact that my car hadn’t done any shaking prior to stalling. The car is very quiet and I didn’t even hear it stall. My first clue was when I put my foot on the accelerator when the light changed – and nothing. I looked at the gauges and the oil lamp light had come on.

I posted on the PT Cruiser forum and a few members gave suggestions on what to have the mechanic check for, mostly thinking it was faulty or corroded wiring.

I took the car in to the mechanic and they scoped it but nothing came up. They suspected a faulty computer that may be shorting out.

I continued to drive the car and from time to time weird electrical things happened but the car kept on driving normally. One time the speedometer didn’t budge, but after about 30 seconds it jumped up to where it should be. Another time the air bag light didn’t turn off. But the next time I drove it, the air bag light stayed out. Sometimes the radio wouldn’t come on.

About two months later the PT Cruiser stalled out on me again while I was at a traffic light. I had just left the farm where I keep my horses, so fortunately I was on a quiet country road. I was close to the shoulder and jumped out to push the car to the side. A nice man pulled over and ran to help me. No sooner had he left than my car started up again. How annoying is this!

I contacted my mechanic again and they were still trying to find a used computer for my car. A new one would have cost around $800 and I was trying to save money because I planned to buy another car in 2017 when I had a little extra money coming in.

The speedometer sitting at zero and then the needle jumping up to the real speed started happening more frequently. I took to driving with my GPS so I could keep track of my speed just in case the speedometer stopped working.

And then the car started stalling again, perhaps 2 or 3 times a month.

I was very lucky every time that car stalled that I was in a place with a wide shoulder that I could pull over to and was safe. The car would always start 5 to 10 minutes later and then just drive along nicely as if nothing was wrong. And it would lull me into a false sense of security. It would behave itself for a week or so and then – hello! Stall again.

I guess I should consider myself lucky that the car always started!

I began to notice a pattern. If the car was going to stall it was usually in the first couple of minutes of me starting it up. And I’m not necessarily talking about the first car ride of the day. I might have been out and about and running errands and the third or forth trip, I’d notice the pattern – that the speedometer was not working. If it was within the first two minutes of starting the car I knew it was probably going to stall.

If I was in a place where it was safe to do so, or still in my driveway, I’d pull the car over and turn it off, wait 5 minutes or so, and start up again. If the speedometer was working I knew I’d be OK. 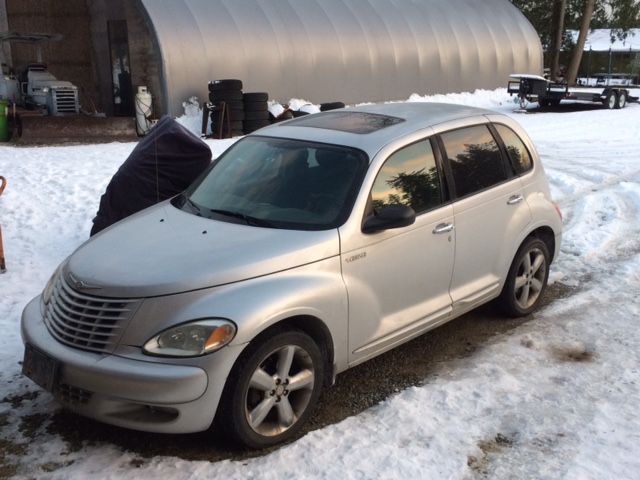 December 2016 was the start of a very bad winter. We had freezing temperatures and lots of snow. The PT Cruiser was great in the snow, I might be the first car making tracks and it never gave me a problem. Those leaky rims and low tires were getting to be a huge pain. My landlord’s big air compressor went on the fritz so I had to rely solely on my portable air compressor, the one that plugs into the cigarette lighter and is a lot slower to fill the tires. It was freezing outside and my fingers were so cold having to take off my gloves to screw on the air valve. I was starting to have enough. Enough of the weather and this silly car’s behavior.

One night I was driving home from the farm, I stopped for groceries. I got a few minutes down the road, to the same traffic light where that very first stall had happened. And the car stalled. It’s dark outside, there’s snow on the shoulders, and it’s freezing. Why!?

Luckily, the car started up immediately. I got about four blocks and the engine cut out but now I’m in a part of the highway where there’s a good shoulder to pull over to. There’s some snow there, but it’s not bad. I wait a couple of minutes and start the car again. I get about another 3 blocks before the car stalls again, so I pull it over. I’m nearly at a major intersection, and where I’m stopped I can see the traffic lights from all directions and I also have a good view in my rear-view mirror of any traffic that might be coming up behind me.

I notice the light is about to turn green and there are no cars behind me. I turn the key in the ignition. The car starts! Away through the intersection I go hoping the next traffic light a mile ahead, my street, will be green and there won’t be any oncoming traffic. All goes well and now I have 3 blocks to my driveway. I’m a little worried if it stalls, the shoulder is not wide enough to pull over, and I’ll have to put my hazard lights on and hope for the best. I’m at my driveway! Whew! I turn in.

And the car stalls.

I’m feeling good that the next day the car will behave itself. Surely its not going to pull a stall routine on me two days in a row. It’s never done that before. But tonight was an oddity. It’s never stalled one time after another before on me either and started right up again after a stall. Maybe I just didn’t give the Cruiser enough recover time between stalls and it was mad.

That night I started checking out cars for sale ads on Craigslist.

I had no idea what kind of car I wanted. The last car I’d had before the PT Cruiser was a Pontiac Vibe and I liked it so I did a search. Only to find out they stopped making them in 2010 and I didn’t want to get a car that old. I checked the similarly built Toyota Matrix to also find it’s a discontinued model.

I didn’t want to deal with buying another car. I hoped my PT Cruiser could last a few more months without doing anything scary to me.

The next morning, Friday, I drove to work. The speedometer was working fine, but after a few minutes it went over to zero and stayed there. I started shaking. I was scared the car was going to stall on me and I was getting past the part of the road where there was a safe shoulder to pull to. If the car stalled I’d be stuck on the road.

The short story is nothing bad happened. I got to work OK but I was shaking like a leaf because I was so scared it was going to stop on me.

I told my co-worker why I was shaking, and he said: “It’s time to buy a new car.”

So what did I do? Spring for a new computer or take his advice?

Have you ever had a car do freaky things to you where you really started to worry about your safety?