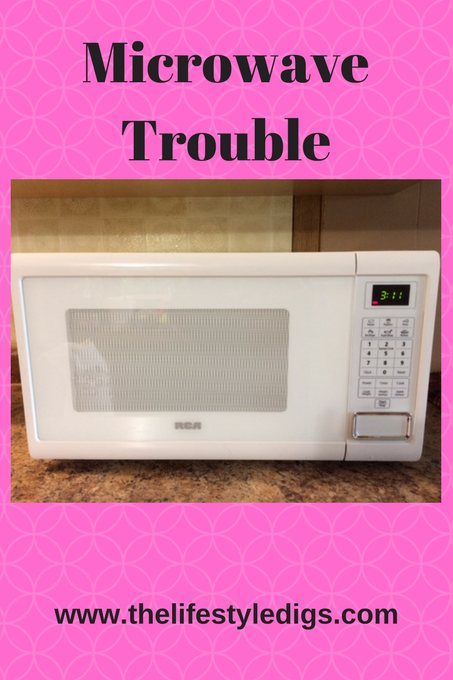 Isn’t it amazing how we take for granted the comforts of the modern world. These days most people wouldn’t be able to exist without their cell phone, their computer or TV.

Another comfort most of us own and don’t think twice about is a microwave oven.

My parents got a microwave oven in the house soon after they hit the marketplace, so I want to say sometime in the 70s. When I moved out I didn’t have a microwave. First there was a dorm room at the University of Victoria. The next year I shared a basement with another woman that wasn’t furnished with a microwave. I moved up to Kamloops, in BC’s cowboy country, about 200 miles from Vancouver, and rented a basement suite on a ranch that had a kitchen, but no microwave. Then I had a live in job on a horse farm and my suite didn’t have a microwave in the kitchen. I don’t remember if the house I rented with a friend in the late 80s had a microwave or not. If it did, it must have belonged to her.

It probably wasn’t until the 90s that I’ve always had a microwave and usually that was a hand me down from my parents. Over the years whenever they bought a new microwave, they gave me the old one.

We all know about microwaves. Perfect for reheating leftovers. Good at cooking some things. Aces at heating water or milk for hot chocolate. Wonderful at melting butter and marshmallows when making Rice Krispies treats. Can’t get along without a microwave these days. Pretty standard in the kitchen.

in 2007 we were moving to a new house and we had accumulated two microwave ovens. I can’t remember if they were both hand me downs from my parents or if we’d bought one, but I definitely remembered we had two microwave ovens. One was a bit smaller and I think that might have come from my parents and the larger one may have been bought at Home Depot.

The really weird thing when we moved to the new house, and after the movers had gone, I realized we had three microwave ovens! Where did that third microwave come from? I’d never seen it before. All I can think of was that it was inside the moving truck when the movers arrived at our old house. Must have sucked for the last guy they moved who is down one microwave oven! Sometime after moving we gave away two of the microwaves: the smaller one and the unknown oven.

A couple of nights ago I was heating up my dinner in the microwave oven, and when the timer dinged and when I opened the door to get my food, the keyboard display went dark and the light inside the oven went out.

Oh great. Have I tripped a breaker? Microwave trouble ahead!

I ruled that one out after I decided to vacuum and that electrical outlet worked just fine.

I was forced to admit it. The microwave oven was kaput. I’d have to buy a new one. And pronto!

Damn! I don’t think I’ve ever shopped for a microwave oven in my life. Most of my old microwaves were hand me downs from my parents. And the big one I was currently using I think the deadbeat showed up one day with it after he’d seen it on sale at Home Depot.

If you remember the story of Chica, my chubby black lab, her weight loss plan consists of eating oatmeal, usually twice a day for breakfast and dinner. I make her oatmeal in the evening and put it in the fridge overnight to serve for her breakfast. The dinner oatmeal I make around 5pm and let it cool before feeding it to her. I need a microwave oven to cook my darned dog’s meals. I know I can cook it on the stovetop but that means scrubbing a pot after. I can cook oatmeal in a cereal bowl that goes in the microwave oven. 45 seconds, stop and stir it, and then another 45 seconds. Fast. And that bowl can go in the dishwasher after the dog’s meal has been served.

I hate spending money unnecessarily. I’m a frugal person, but I’m not cheap. If I need something, I’m going to get it. I’m also not looking for the cheapest product on the market that’s going to break down soon rather than later. I’m going to buy something that will last and get the job done. That microwave oven must have lasted more than 10 years because I just don’t remember when it was bought. Or if that was a hand me down, it had an even longer lifespan.

I go to Amazon’s website for a look around and I see a pretty nice RCA microwave oven for a good price. (Disclosure: if you click the photo and link below and make a purchase from Amazon, I’ll receive a small commission for the referral.)

Reality hits. If I order from Amazon it’s going to take a few days, maybe up to a week to get it. Can I live without a microwave oven that long?

Sears Canada has declared bankruptcy and everything is on clearance sale. I decide I’ll stop by and check out what their microwave ovens are selling for. Seeing as how I’ll be in the area and Canadian Tire is a couple of blocks away, I check out their web page. They also have the RCA microwave oven and it’s on sale right now, the same price as Amazon.

The next morning after I fed my horses, I head to Sears, about a 15 to 20 minute drive from the farm. I park my car, reach onto the passenger seat to grab my purse…. and it’s not there!

I left my purse in the barn!

Comedy of errors. I rarely take my purse to the farm and only took it with me because I was planning to go shopping for a microwave oven. I took my purse into the barn and set it on my camp chair. And left it there. Aw man! I get out of the car anyway to look in Sears. I was curious because news coverage showed people saying the deals weren’t all that great. I checked and all the microwaves and they were all significantly over $100 except for one small microwave on sale at $55. No thanks.

I returned to the farm, grabbed my purse, and went to Canadian Tire. There I bought my new RCA microwave oven. 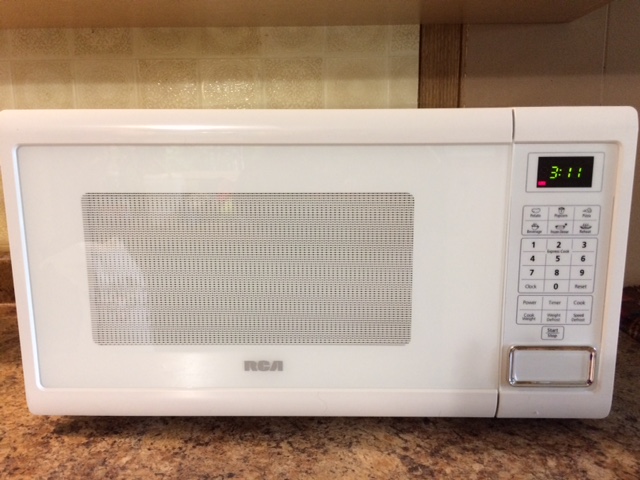 Then a small dilemma came when I tried to use it. My mistake for following the manual and there seems to be this cooking power option. Eventually I figured out, similar to my last microwave, that if I touch the power button and then punch in the seconds or minutes I want it to cook, I’m good to go.

So far all I’ve done is cook Chica’s oatmeal and heat up my soup today but it’s going well.

I hope that will be the end of my microwave trouble for awhile.

Have you had a microwave quit on you? What other modern conveniences do you have to own?