Skip to content
Cheryl at The Lifestyle DigsMay 7, 2018 Living No Comments

Let me start by saying I wasn’t sure if I should choose a title of “man seeks financially secure woman” because I thought that might lead to some very weird searches ending up here, but in the end, I decided it’ll have to work! 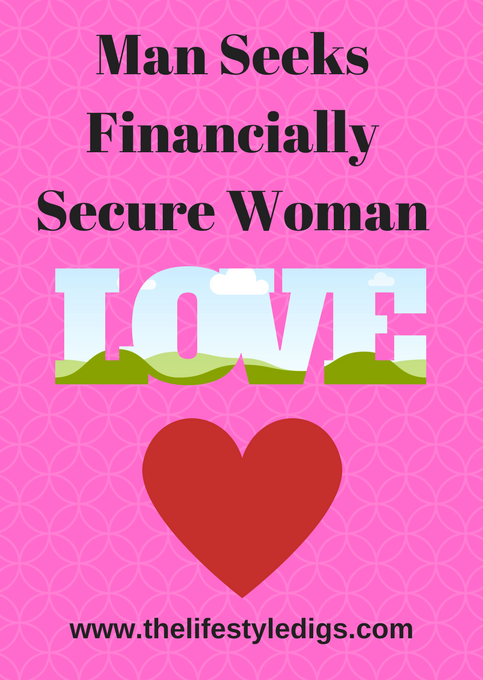 I subscribe to a dating over 50 newsletter and a recent issue featured Roger, 70 years old who felt he was a great catch – retired doctor, good looking, fit (humble much?) and complained that women were too picky. And then proceeded with a laundry list that showed he’s picky himself!

It’s kind of a tough link to find on the webpage to copy and paste a link back to, but if you search for the 2018 archives and the April 20 newsletter you’ll get to it. http://www.findingloveafter50.com/copy-of-2013-2016-enewsletters

Is being picky so wrong? Everyone, man or woman, knows what they’re looking for and what they’re not looking for when it comes to a relationship. Some of these things will be deal breakers, others we can live with.

For example, I’d never hook up with a smoker. That’s a deal breaker. Won’t even consider it.

I’m not too keen on facial hair, but I’m not picky enough to discount a man who’s not clean shaven. That’s not a deal breaker.

I’m also leery of men who can’t manage their finances, though that’s probably not something anyone will admit to in an online dating profile and in real life may even hide it for awhile.

Someone with huge debt would likely be a pass for me. Certainly, there are unfortunate life circumstances where debt may accrue, but I’m calling out men who can’t control their spending. If you want something, save up for it instead of buying on credit.

Did you read my post about 15 stupid money mistakes? Depending on the circumstance and if it’s out of control, these would be red flags for me when getting involved with a man. I prefer a man who is financially responsible.

Getting back to generalizing…

As women, do we generalize that all men might be one thing or not another thing of something else?

How about….. All men are bad drivers. That’s just an example that I pulled out of the air! Don’t hold me to it! There’s a lot of women bad drivers out there too. This bad example only shows how it’s easy to generalize the male population.

I’m guilty of generalizing when I read an online dating profile where a man says he’s looking for a “financially secure woman”. He never specifies exactly what this means to him. He may have also mentioned somewhere in the profile that he’s “financially secure”. And why do they never provide more details on their financial assets or net worth.

I generalize all men who write that they’re looking for a “financially secure woman” as cheap or stingy.

Interestingly enough this is mostly prevalent with the baby boomer generation. Younger men don’t say that or seem to have a problem whether the woman in their life is financially secure the way older men do. Younger men appear to be more open to financially supporting the household if the woman is unable to do so.

I don’t own a house, so I can see how some people might generalize that I’m not financially secure, as if home ownership is the benchmark. I’ve owned houses in the past but sold my last one in 2013. Being a homeowner is too stressful for me. I wouldn’t rule out owning a house in the future, but for right now I enjoy not worrying about everything that goes along with house ownership. I have no debt and I have financial assets, but I don’t see myself as being financially secure so I’d never respond to a man who is picky enough to specify that in an ad.

Am I generalizing all men who say they’re looking for a “financially secure woman” as stingy or cheap? Sure, but I’m not going to take my chances on one of them!

I can pay my own way. I’m not looking for a man to do that for me. I’d love to find a traveling companion when I go horseback riding in Peru and cruise around the Galapagos, and he won’t have to worry about buying my flight and hotel. I can cover my own expenses.

I don’t want to date a man who’s looking for a “financially secure woman”, stop at an ice cream stand, and he won’t be generous enough to buy my cone.

A man who’s kind enough to buy me a snack without giving it a second thought? Well, next time I’d be pulling my wallet out first!

Why does a man state that he’s only interested in matching with a “financially secure women”? No others need apply? How is the balance in a woman’s bank account a measure of how she rates as a kind, compassionate human being?

There are many reasons why a woman’s finances aren’t where she wants them to be. She could have spent a lifetime in low-paying jobs. Maybe she had huge medical bills to pay off. She could have gone through a divorce after age 50 – that’s a thing called a gray divorce.

Going through a gray divorce will take a huge toll on your finances, and this is a time when you’re nearing the end of your working days and should be saving hard for retirement instead of paying legal fees. Let’s face the facts. Men usually have better paying jobs. It’s hard for a woman to get back into their work force if she’s over 50 and has been a homemaker for years. Suddenly you’re single, no income or a huge drop in income when the ex’s household contributions are factored in. Could mean the loss of a house. A big joint asset like that has to be sold and the proceeds split.

There are many reasons why a woman’s bank account is nowhere near where she hoped it would be as retirement inches closer. And that makes her an unacceptable romantic partner because she’s not “financially secure”?

Why isn’t his focus on finding a woman who has common interests and beliefs who he can fall in love with? Why focus on her bank account?

We want to find someone to fall in love with, get married, and create a home together. Being in a relationship means co-mingling our funds. Why are men hung up on this? Oh wait. Generalizing. Only men seeking a “financially secure woman” are hung up on that.

As I said, I look at men who write that as being El Cheapo and not someone I’d want to hitch my wagon to.

Someone who is “financially responsible” is more important to me than financially secure.

Are you like me and the warning bells go off?

Stay away from this cheap miser!