The cliffhanger in Life with Horses and the Trouble with Farriers – Part 1, is my long-time farrier, Ken, since 2002, told me in the summer of 2017 due to his eyesight and back, he was retiring from the sideline farrier gig.

That meant I was back to checking the bulletin boards at tack stores!

I grabbed business cards of three female farriers. Way to go ladies for getting into a primarily male dominated profession! I want to support women who own small businesses.

The first lady I called came out on noon on Saturday, about a week before Christmas. Seemed like a nice young lady, about 20 or 21, and she’d gone through the farrier college program a year earlier and had a few clients.

Unknown: if any of them were repeat clients.

She came with her mother. One reason I could think of was for safety. A young woman going to a strange farm, you don’t know what’s going to happen.

The other reason was the big L decal on the back of their truck. L = learner driver license. That’s a bit disconcerting. Most kids go for the driver’s license as soon as they turn 16. By the time they get to college they should have their N decal = new driver. Being a farrier is a mobile occupation. The farrier goes to the horses, not the other way around. This L driver had to have an adult with a valid driver’s license inside the car every time she hit the road.

She ended up being a big mistake. Maybe the mistake was mine. The one question I never thought about asking her when I phoned was how long does it take you to trim a horse. 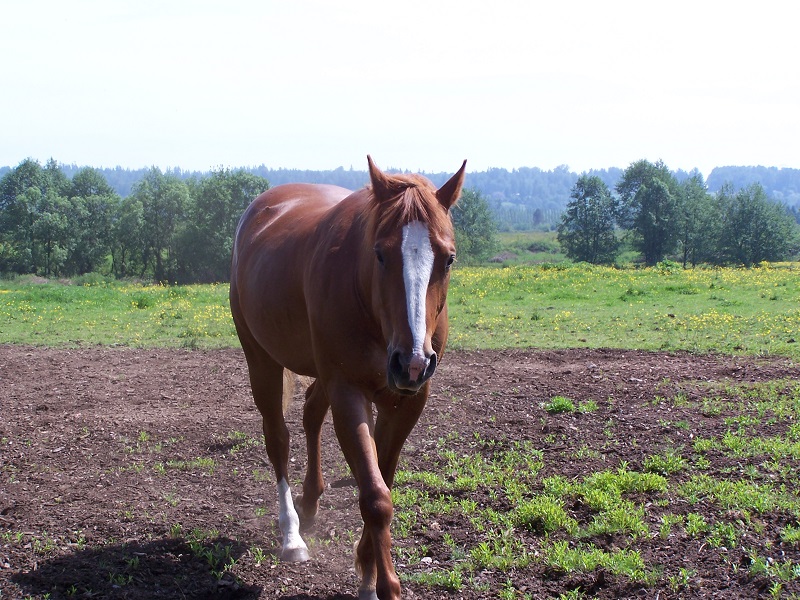 How fast can you trim a horse?

The correct answer for most farriers is 20 to 30 minutes. That depends on the horse, both how it’s behaving and the condition of the hooves. Sometimes it takes longer, but that’s about average.

It took her two and a half hours to trim the first horse!

Cajun’s patience (and mine!) ran out about the one-hour mark.

Jeez Louise! She trimmed him perfectly symmetrical like he was going in the show ring and being judged on the hoof curve. All I need here is a pasture trim. 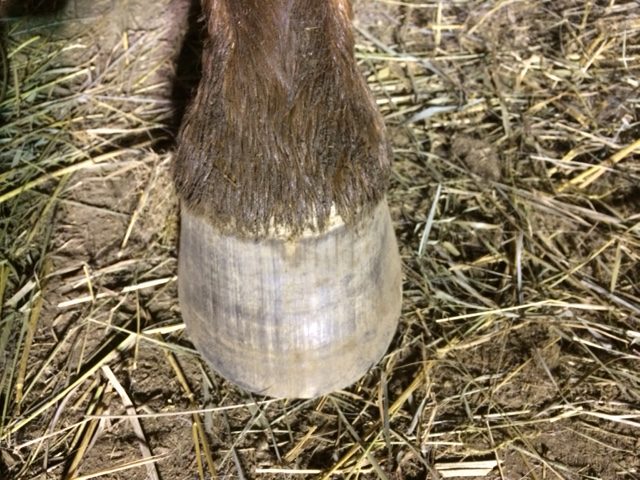 And then she announced it was time for a break. She’d packed a lunch! Or maybe mommy packed it.

Whistler is a very patient horse and it still took close to two hours. And then here’s the kicker when she FINALLY finished. I can see she’s pulling out her receipt book. I told her I didn’t need a receipt. Why would I? They’re pleasure horses. I can’t write anything off on them. She insisted her instructor told her to write out a receipt for income tax purposes. This took her another 20 minutes! She had to keep referring to the carbon copy of the receipt she wrote for her last client.

Figure out your profit equation

Oh, little girl. Here’s the thing with small business owners when they get paid cash. Especially when it’s small cash amounts. They put it in their pocket. It’s none of my business whether or not small business owners declare all their cash payments on their income. The damned government taxes us enough anyway!

Well, that’s not profitable. She needs to get her speed up if she wants to make money. Not to mention getting repeat business! If she charges $30/horse and it takes her an hour or so to trim two horses, then that’s pretty good money.

I phoned Ken when I got home to complain about the farrier who wasted the whole afternoon. So much for getting to the feed store. It closed at 5, so I missed it.

I wanted to make my Instant Pot vegetable barley soup. If I’d started around 2pm, or even 3pm, I’d have homemade soup for my dinner.

Ken says, oh I guess you’re just going to have to open a can.

In other words, Ken wasn’t so sympathetic. He asked the obvious – are my horses sound? Did she do anything to make my horses lame?

And that is the most important thing.

I said I needed to find another farrier.

Ken talks me into giving her another chance. He said she may have been nervous, wanted to do a really good job to impress me, and needed time to get to know the horses.

I texted Ken the photos I took of Cajun’s hoof, and he responded that he didn’t see anything wrong. Nice and round and even. 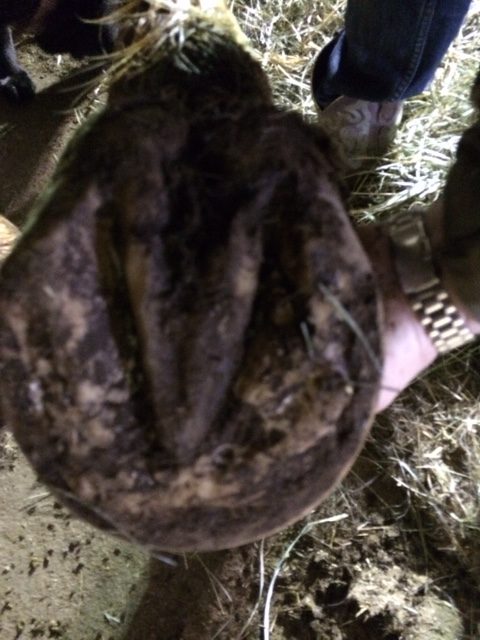 I decided to grudgingly follow Ken’s advice and a couple of months later I called her to set up an appointment to trim my horses. I think I called her on a Monday and asked if she could come out that weekend.

Well, that sort of stunned me. If I have a cold, I take a couple of Dayquil and keep on going. Just about everybody I know takes cold medicine and goes to work, unless they feel really horrible. Especially when you’re a small business owner. We ran a small renovations/handyman repairs business. Unless we were feeling really lousy, or contagious, we took some meds and went to work. If we don’t work, we don’t make money. I realize I’m dealing with a Millennial here. They have a different thought process than us old-timers.

“Don’t you think you might be over your cold by the weekend?” I ask. It’s just a cold. It usually passes in a couple of days. I struggle not to point out the obvious – don’t you want to make money? 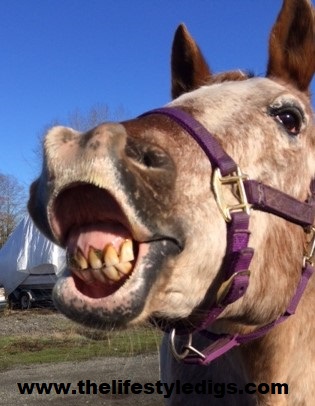 “Oh, I don’t know,” she says, and lapses into silence.

Girl, what is wrong with you? Whenever we were dealing with customers, we always suggested an alternate day if we were unable to come to their house on their requested day. We don’t want to leave money on the table.

“Why don’t you call me later in the week and let me know how you’re feeing,” I suggest. “You might be feeling better by the time the weekend is here. And if not, maybe you can come out the next weekend.”

“But that’s a holiday,” she quickly protests.

Sure enough, Good Friday is coming up at the end of the following week. Good grief! I struggle not to point out to her that the entire weekend is not a holiday. Good Friday, and if you’re religious, then maybe Easter Sunday too. Saturday is not a holiday. It’s none of my business what her religious beliefs are. I bet there aren’t any or her response would have been something to the effect of “that’s a major religious holiday for me and I’m going to be tied up most of the weekend”.

I think it’s more like the Millennial sense of entitlement that even though they aren’t in school anymore they still want to take all the holidays they got while in school.

“Just call me when you’re feeling better,” I say, and end the call.

Back to the bulletin board!

I’m pissed off. I get it that she’s young, but she doesn’t seem too interested in not letting opportunities to make money slide away from her. She’s not hungry enough to make money. The joys of still living at home. And probably not paying rent. Or buying groceries. 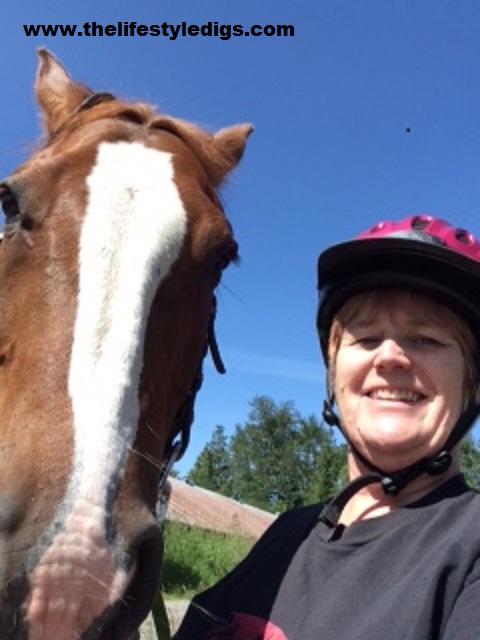 There were two other business cards I pulled off the bulletin board the day I found her card. I call them both, got voicemail, and left messages. Neither of them called me back.

Ah yes, I’m back to dealing with irresponsible farriers and those who go missing. Don’t you people want to make a few bucks?!?

I remember an ad for a farrier that I stuck in the window behind the table where I keep my dog supplies. It was inside a swag bag that I got at Greenhawk a year or two before. I must have hung onto it because Ken was hinting, due to his failing eyesight and back, I should start looking for another farrier.

I phoned Kyle the farrier about 7pm, thinking he’d be done for the day and I wouldn’t be interrupting him in the middle of shoeing a horse, and he answered. Sure enough he was home, happy to chat, and I told him about my horses.

“I hate to ask you what might be a stupid question,” I say.

“No, go ahead,” he says, “There are no stupid questions.”

“Oh, yes, there are stupid questions,” I laugh. “And I’ve never had to ask a farrier this before. How long does it take you to trim a horse?”

He gives me the right answer!

“About 20 minutes,” he says. “I’m pretty fast. But I don’t skimp. If the horse needs extra attention, then I take whatever time I need.”

“That sounds about right,” I said. Whew! And we set up an appointment.

He has a young family to support. Hopefully that’s his inspiration to be reliable.

The young lady farrier calls me back. Thank God for call display! I let it go to voicemail. She’s still sick. She’ll call me when she’s feeling better to set up an appointment. LOL!

A couple of weeks later she calls again. Call display! I let it go to voicemail. She’s feeling better (and the holiday weekend is over LOL!), asks me to call her back and we’ll set up a time.

No thanks, I think I’ll pass. She called one more time but didn’t leave a message. She probably got the hint and never called again.

So far so good with Kyle. He shows up, trims my two horses, and is gone 45 minutes later. He’s been trimming my horses for over a year now and still hasn’t gone MIA.

The trouble with farriers is they go missing, never to be heard from again. Which means starting the process all over to find a new farrier.