Home Living Life around Cloverdale, British Columbia and Beyond during Coronavirus Pandemic 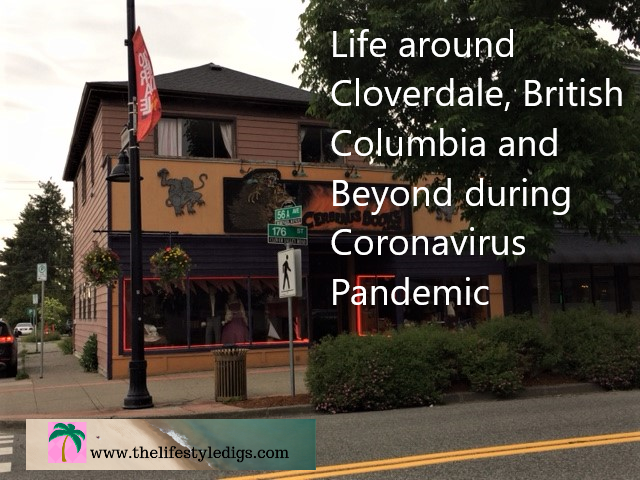 It’s been two months since my post Life Around Cloverdale, British Columbia during Coronavirus Pandemic, so it’s time for an update.

Our province never did go into a full lock down stay at home order, but there is a two week quarantine order for travelers from other countries coming into B.C. Dr. Henry, the province’s top doctor, and government officials have been recommending people stay home. That’s still pretty much the advice.

Phase 2 reopening in B.C. is underway.

Schools were closed in March, but they go back into session on June 1, 2020 on a part time basis. Attendance is voluntary for students and mandatory for teachers, except for those with health concerns that put them in a higher risk category. It’s up to the parents if they’re comfortable letting their kids return to school at this time. Depending on what grade they’re in, students will either return to class on alternate days or once a week.

Hair salons, barbers, tattoo parlors, and spas were ordered closed in the middle of March, but were allowed to reopen beginning May 19, 2020 if they can follow health orders. Generally this means the salon or spa might have to limit the number of people inside their business to maintain social distancing, and staff must wear face masks and gloves. Depending on the treatment, the client may also be required by the salon to wear a face mask.

Hmmm… it would be pretty difficult to get a facial if you’re wearing a mask!

When I walked past a barbershop yesterday, I saw a man getting a hair cut but he wasn’t wearing a face mask, so perhaps that’s not mandatory for customers, but some business owners may require customers wear masks as an additional safety measure. 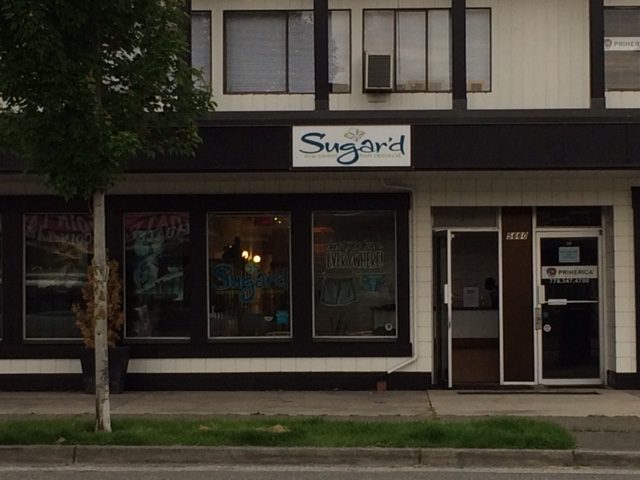 The salon where I get my eyebrows done, Sugar’d is reopening June 2. They phoned me a week ago to rebook, seeing as how my previous appointment got cancelled when the Covid-19 restrictions came into place. They’re asking customers to wait outside on the sidewalk or inside their cars, and they’ll phone when they’re ready for them to come inside the treatment room.

And I still need a hair cut!

From the beginning of the pandemic restrictions, restaurants and bars were only allowed to operate for take out and delivery. As of May 19, 2020, they can serve clients inside their restaurants, but at about half capacity to ensure social distancing. There’s a maximum of six people per table. 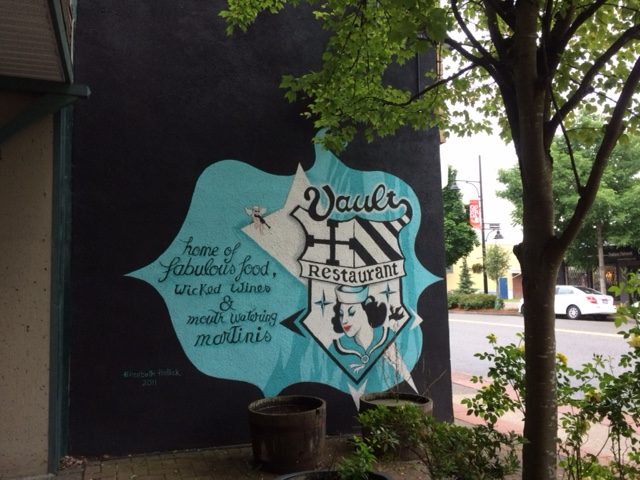 Check out the Vault Restaurant in Cloverdale and their new Covid-19 rules. 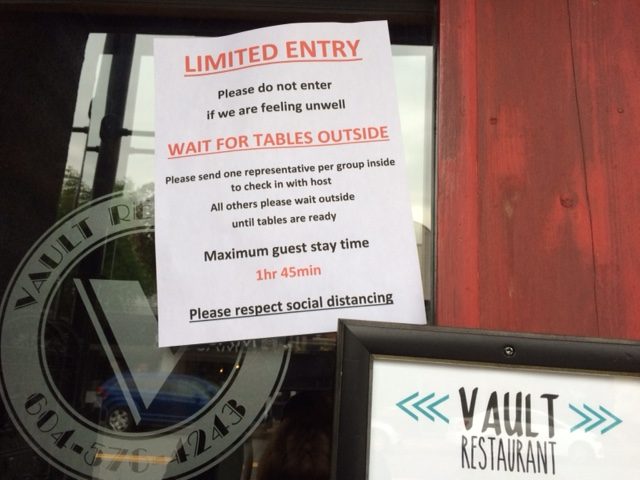 Just heard the unfortunate news that Gabby’s Country Cabaret in Langley is shutting its doors. Sad story for many bars, restaurants, and entertainment venues that can’t continue to keep their doors closed during the pandemic and keep paying their rent and other bills.

Cruise ships with more than 100 passengers and crew combined are prohibited from entering Canadian waters until October 31, 2020.

Previously, cruise ships were banned until July 1, 2020, but that was recently extended until October 31. Many large cruise lines had already shut down operations until later in the fall anyway.

I looked at Holland America’s website and they had a cruise departing Vancouver on September 20, destination: Hawaii. Sucks if you booked that vacation! 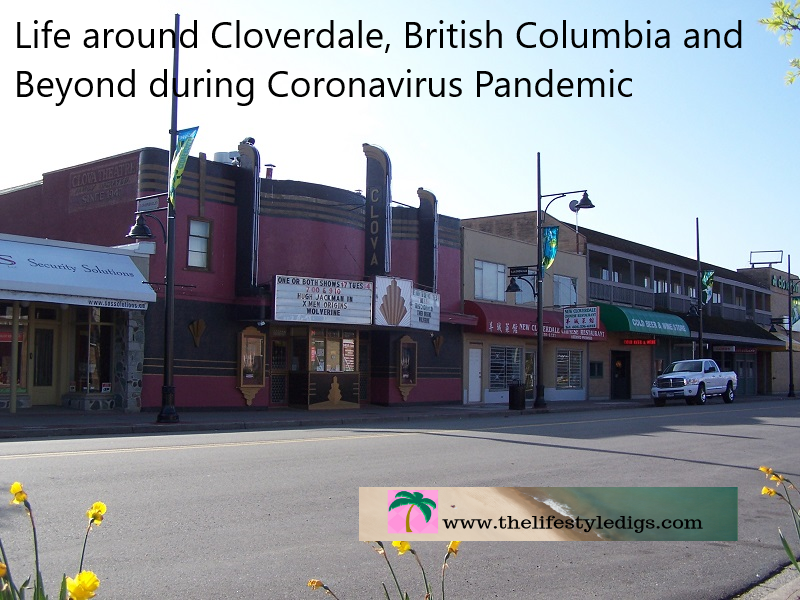 As for the ships carrying less than 100 passengers and crew, that will be up to provincial and regional governments to spell out any further requirements.

The Alaska cruise ship season is huge for the ports of Vancouver and Victoria. The cruise ships departing from Seattle stop in Victoria on the way home to comply with maritime law – including one foreign port on all voyages. So what that means is if you booked a cruise out of Seattle to Alaska this summer, you better start looking for a refund.

Tourism is a big industry in British Columbia, but there are many other industries that keeps the province running.

A lot of people don’t care about horse racing, and it is pretty much a dying industry in B.C. However, when the horsemen aren’t racing and making money, it’s pretty tough for them to feed their horses. 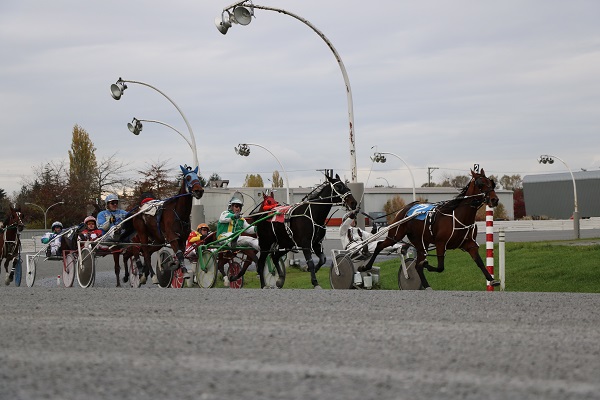 As a person who’s been involved in horse rescue, the well being of these beautiful animals is important to me.

Fraser Downs at Elements Casino in Cloverdale was forced to close in the original phase of government shut downs in March, when there was still about one month left in the racing season.

Horsemen usually travel to Alberta or maybe Ontario or Sacramento, California for summer racing, but not this year. Racing is shut down everywhere.

Casinos can’t reopen until Phase 4 – when there’s a vaccine.

The plan is to get the horse racing going as soon as possible, but there won’t be live fans in attendance. This means racing fans can watch the live stream on their computers and place online bets. That’s the plan for the Kentucky Derby when it runs on September 5, 2020. That race normally runs the first Saturday in May.

Vancouver’s Thoroughbred racetrack, Hastings Park, is hoping to get running in July, without live patrons watching.

The Derby Bar & Grill just south of Cloverdale shows simulcast horse racing and has off-site betting. Their web page says they’re open and operating at 50% capacity and come in and watch the races, so that might be the best bet (pun intended!) for local horse racing fans.

British Columbia did not have an order for stores to close..As long as they could comply with social distancing and other procedures, they were allowed to stay open.

I’ve noticed many stores limiting the number of customers that can be inside at a time. Grocery stores and big box stores excluded.

Just about every business has plexiglass up to protect employees.

Banks, an essential service, were not ordered closed, though some branches did close down on orders from head office. Apparently these locations were unable to keep up with cleaning or crowd control. I was in the Cloversquare Village Mall on May 30 and saw customers lined up outside Coast Capital and around the side of the building. Last Friday of the month, payday, need to pay bills? I don’t know. Have these people never heard of online banking or ATMs? This branch has a drive through ATM and an ATM inside the lobby. Somehow, I doubt this was the ATM line up, seeing as how there was only one car in the drive through. 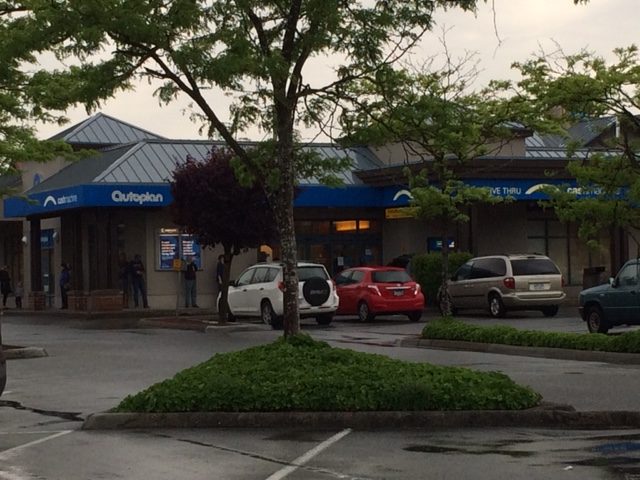 In Cloverdale during late March and early April many retailers temporarily closed in Cloverdale, even though there was no government order to do so. This may have been out of an over-abundance of caution. Every day in the news we heard about new coronavirus cases, and with a lot of uncertainty, shop owners may have temporarily closed to stay safe.

For about a month I’d say a lot of people were staying close to home and only going to the grocery or drug store as needed, and not shopping anywhere else. 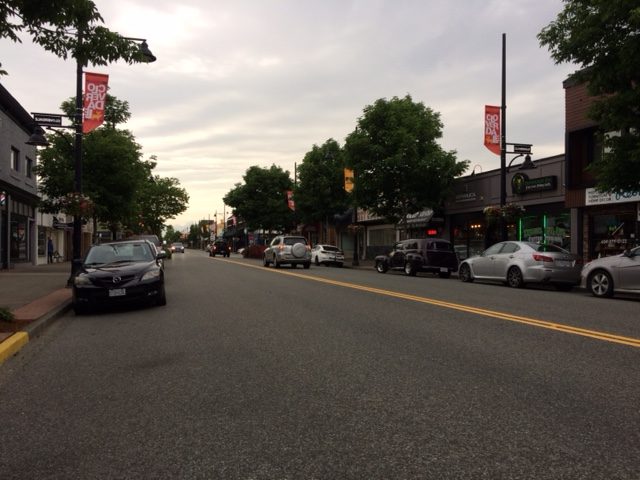 There are more cars on 176 Street in Cloverdale as businesses are reopening. 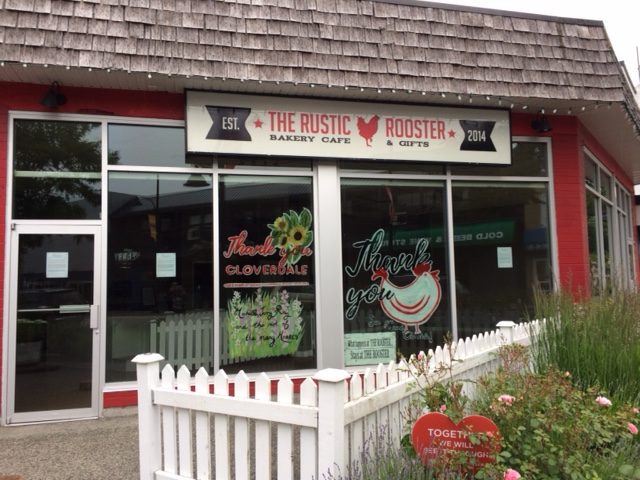 The Rustic Rooster coffee shop was operating a few hours a day for take out, but just announced they’re closing forever. Another victim of the pandemic, they can’t pay the rent and other bills. I walked past on May 30 and everything is gone from inside. No tables, no chairs, no fixtures… 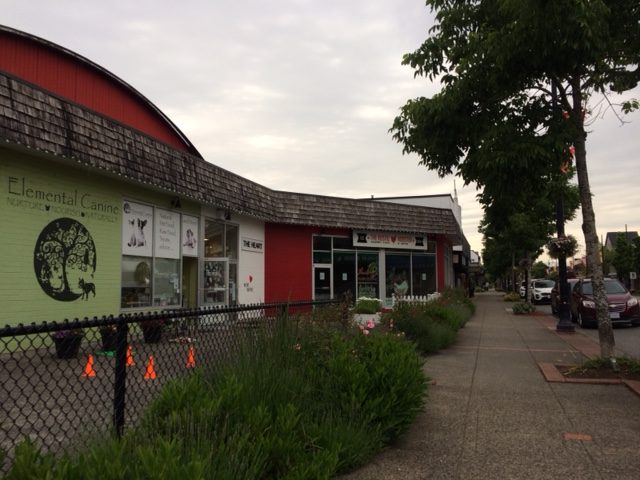 If you’re wondering why the bump out, back in the olden days this building used to be a gas station and garage. Cars needed room to pull off 176 Street to fill up at the pumps.

Cloverdale, aka Smalltown, USA, has had many TV shows, movies, and commercials shot here over the years.

For example, if you’ve seen Deck the Halls starring Danny Devito and Matthew Broderick, all the town scenes are Cloverdale and that’s where they live! Check out the trailer for some glimpses.

The Chilling Adventures of Sabrina TV show is filmed around the area, including the old Dann’s building aka Cederus Books. 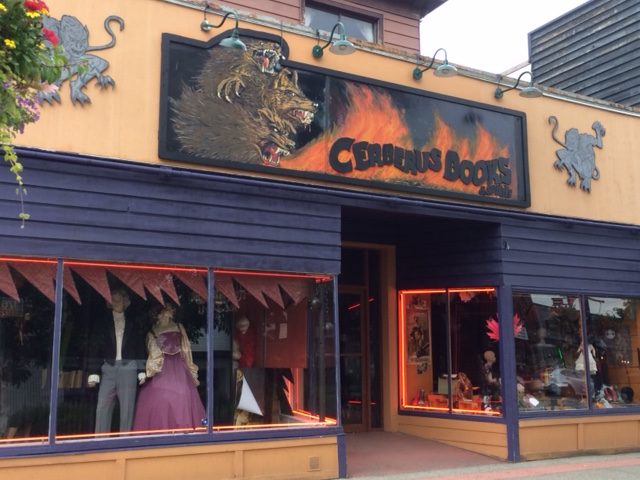 Which totally looks like a place I’d like to browse! I was so disappointed it’s just a TV set..

Anyway, I don’t know when TV shows and movies are going to resume production in BC. A lot of that is close contact work. Can you image filming a love scene with everyone six feet apart! 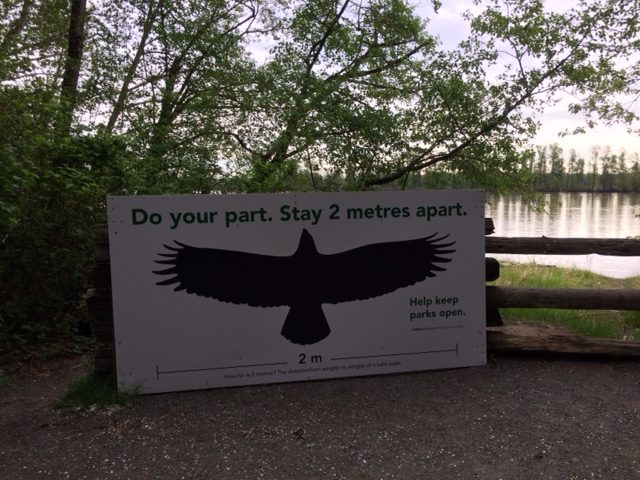 I haven’t heard anything about movie theaters reopening, but then no new movies have premiered recently! It seems to me that theaters can enforce social distancing, either by removing rows of chairs or taping them off.

I can’t tell you how many times I’ve gone to the movies and there’s less than two dozen people in the theater, so we can pretty much keep our distance.

It’s not like I go to the movies that often anyway, and usually by the time I see a show it’s already been playing for a couple of weeks or longer, which might explain why the place isn’t packed.

Why oh why does some tall dude always sit down right in front of me in a mostly empty theater? What’s up with that? Why be a jerk? A petite woman specifically picked a seat with nobody in front of her to block her view of the screen. And you can’t find another spot to sit? Nice.

British Columbia’s coronavirus statistics have been lower than provinces like Ontario and Quebec, and even Washington state which is just south of us,

As of the end of May, B.C. has had 2,573 confirmed cases and 2,181 have recovered. Currently there are 35 people in the hospital, with 5 in intensive care. Sadly, there have been 164 deaths, many of those in senior’s care facilities. Daily numbers for new cases are low, less than 20, and there have even been a couple of days with no deaths.

In all of Canada there has been 90,947 cases and 7,295 deaths. The majority of these numbers are in Eastern Canada.

When it comes to travel within Canada, currently New Brunswick (which borders on Quebec), Prince Edward Island, and Newfoundland are not allowing visitors from other provinces to help stop the spread of Covid-19. Visitors to Manitoba and Nova Scotia will have to self-isolate for 14 days, which will probably keep vacationers away. The other provinces are advising against non-essential travel. 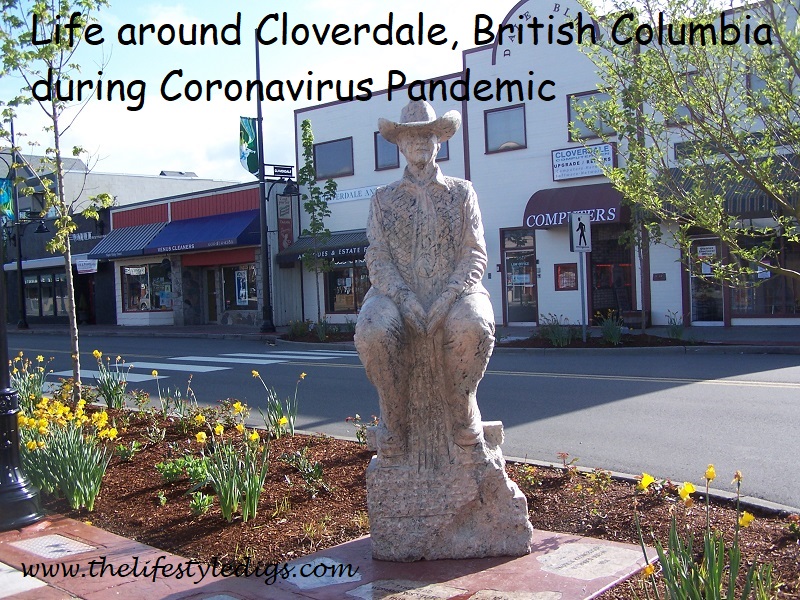 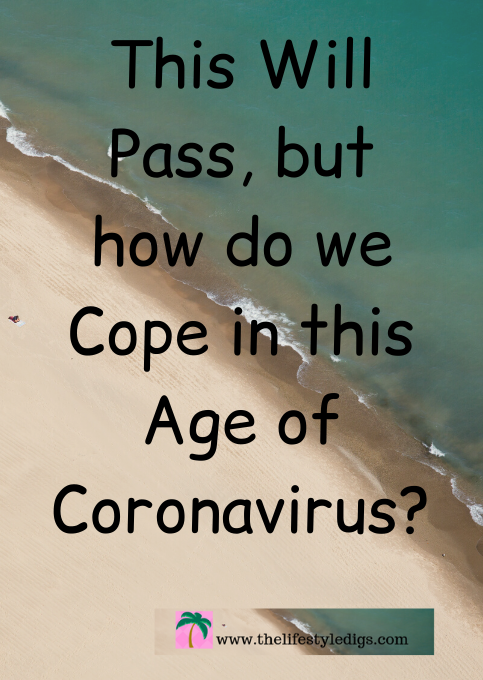