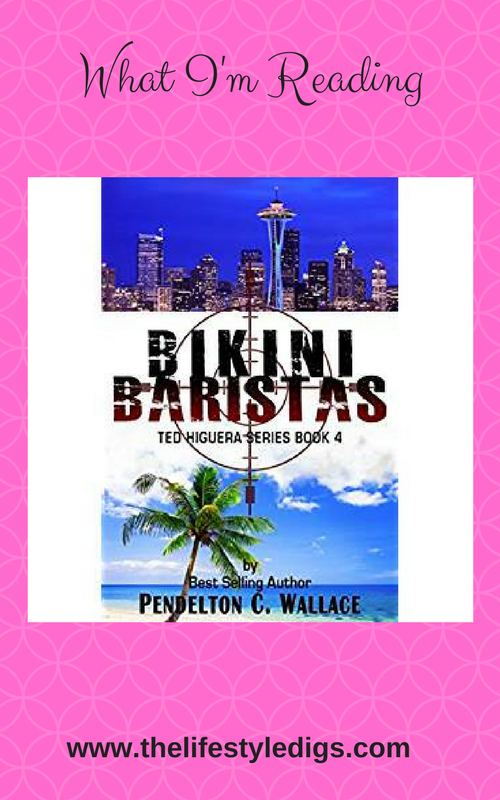 If you’re wondering what I’m currently reading, it’s Bikini Baristas. And I don’t recommend it.

You know that old saying how you shouldn’t judge a book by its cover? I don’t buy into that. It’s my experience that books with good covers are usually a good read. And I get it that some book covers suck but the book might still be wonderful. I’m sure I’ve read a few of those books too.

(Disclosure: this post contains affiliate links. If you click you’ll be taken to Amazon, and if you make a purchase I’ll receive a small commission for the referral.)

Bikini Baristas has a cover that I like. It has two very different pictures/themes going on. The first is a picture of the Seattle skyline, obviously that’s the Seattle Space Needle. Cool. Seattle is in my neck of the woods. It’s about a 2 hour drive depending on how long the waits are at the US border crossing in Blaine, Washington. I like to read books that take place in the Pacific Northwest. I get a homey feel from them.

Below the Seattle skyline photo is a tropical beach scene. Blue skies, ocean, sand, and a palm tree. That’s my kind of a vacation! And so very obviously not Seattle. How are these pictures blending together to make a book titled Bikini Baristas.

I’m sure in some parts of the United States there are places where bikini baristas might live and work year round. Probably anywhere that palm trees grow in a land of sun and blue skies. In Seattle there might be a couple of months where a barista might wear a bikini depending on where they’re set up. For most of the year there’s rain and dark skies and cold weather, so a bikini barista in Seattle has a limited time range to wear a swimsuit.

The title intrigued me. I also asked myself where have I heard the name Ted Higuera before. The book was free on Amazon when I nabbed it and let it spend some time in the library in the Kindle app on my iPad. I had better things to read.

For example I’ve been reading the Cookies & Chance Mysteries by Catherine Brun. I bought the first book Tastes Like Murder in February of this year and probably read it shortly after that. Over the next few months I purchased the next three in the series: Baked to Death, Burned to a Crisp, and Frosted with Revenge. In September I read Baked to Death and Burned to a Crisp. I decided to leave Frosted with Revenge for a little bit and catch up on some other reading before continuing with the series. Sally owns a cookie bakery and always has a murder to solve where either she, her boyfriend, or her sister are the prime suspects. Throw in her quirky Italian family and it’s a recipe for fun. I’m not feeling the relationship with her boyfriend/fiance. They’re supposed to get married in book 4 and I keep hoping it doesn’t go ahead and that’s part of the reason I’m putting off reading the book.

Last month I also read Pineapple Beach House by Amy Vansant. Charlotte lives in a retirement community in Florida called Pineapple Port, even though she’s in her 20s. Her actual age escapes me at the moment. Maybe she’s 30. She was kind of grandfathered into the retirement community when her aunt and guardian passed away and she inherited the mobile home. It takes a village to raise a child comes into play when the residents of Pineapple Port take over raising Charlotte until she’s old enough to live alone. The author does a good job of creating a fun cozy mystery and for the reader it’s an escape to where the sun is always shining. However, Pineapple Beach House left me feeling ripped off. The group heads up to North Carolina to get a free beach house vacation in exchange for painting and doing repairs. If they’re going to move around, another location in Florida would have been a better choice. North Carolina was being battered by a storm, they were rained in and dealing with flooding and no road in or out. And body parts kept showing up. Although they guessed whodunit, the suspects were out of the country, and the only way the reader knew for sure was due to a flashback scene. This is the weakest book in the series. If you’d like to give this series a try, you can’t go wrong with the first book, Pineapple Lies which is usually priced at .99¢.

I just finished reading Dark Paradise by Catherine Lee. I picked it up because I saw it on for free and it was about a reality TV show. Almost immediately I wasn’t sure how I’d like it because it takes place on an island off Australia. No offense Australia! It’s my experience that books written by authors outside of North America don’t hold my interest. And sadly this was a tough book to get through too. I wouldn’t call it badly written, it had a good plot, but it just wasn’t my thing.

But at least I pushed through and finished it. I can’t say the same for Hawaiian Hangover. Again, looked like a good cover and it takes place on Hawaii, the stuff of what I look for in a book. It had to be a good one, right? Wrong. I abandoned it early on, though I could see how this type of book would appeal to a demographic that I’m not part of.

Getting back to Bikini Baristas, as soon as I started reading it I remember why Ted Higuera seemed familiar to me. I’d read the first in the series The Inside Passage about 2 years ago. That book is almost always kicking around for free. The author writes at a level that is appealing to young adults. I personally prefer a book that is a little more advanced, but I absolutely understand why his writing and this series are popular. You don’t have to put a lot of thought into reading this series. It’s very simple. I picked up The Inside Passage because it’s another Pacific Northwest setting and had a cruise ship on the cover. I’ve cruised the inside passage a couple of times, it’s the body of water between Vancouver Island and British Columbia’s mainland. The book had a good plot and was well thought out but it was riddled with errors. One of the funniest being Ted’s friend Chris, whose father owned the sailboat they were traveling on. Sometimes Chris became Christ, especially hilarious when he was steering the boat, giving the reader an image of Jesus up there in the cockpit. The errors made the book funnier than what it should have been.

I haven’t really been able to get into Bikini Baristas yet even though I started reading it 4 days ago. I only seem to get through a page or two at a time. When I read it at the farm, my horses seem to decide to misbehave and I have to deal with them. I read it when I go to bed and it puts me to sleep right away. I’ll just keep plugging away.

What’s currently waiting in my Kindle library besides the already mentioned Frosted With Revenge that’s been there for 5 months now unread? I’m thinking I need to put aside good old Ted and Christ, oops make that Chris, and start reading A Haunting Homicide: Halloween Cozy Mystery Boxed Set. I’d like to get through it before October 31. So that’s my new priority. 4 full length cozy mystery novels on for .99¢. A great price. I find when I buy boxed sets I don’t always like all the books, but I like most of them and it always makes it worth the price, even if I only like one or two. I bought two Elise Sax novels, another hilarious novelist who writes cozy mysteries and romantic comedies. Going Down and Man Candy is a 2 book set and Switched is the other book I bought. I’m looking forward to reading Even Money, that’s part of the Raven McShane Mysteries. Raven is a Las Vegas stripper who knows she won’t be as much in demand as she ages so she becomes a private eye. Las Vegas is one of my favorite places, and I love cozy mysteries, so it’s all a good fit for me.

That’s not everything that’s sitting unread in my Kindle library, but those are next on the agenda for my next installment of what I’m reading.

What are you reading?