After two nights at the wonderful Ester Lee Motel in Lincoln City, it was time to keep heading south on Highway 101 to Coos Bay, Oregon where I’d planned my next night’s stay.

With exciting ocean views and dramatic cliffs along the Oregon Coast, I kept stopping whenever I saw a scenic viewpoint or beach access. My plans for the day were the Sea Lion Caves, a dune buggy ride, and Cranberry Sweets.

The first time I visited the Sea Lion Caves was around 1974, when a fast moving college kid wired a bumper sticker onto our camper, and the last time was in 1992. It’s a tourist trap a few miles north of Florence that houses a gift shop and an elevator through the rocks to a big cave where hopefully sea lions will be inside. What stands out about the cave is the noise and the stench!

I’d seen some reviews online where visitors were disappointed they’d bought tickets, gone down to the caves, and there were no sea lions. These animals are not held in captivity. They’re free to come and go, and there’ll be times when they’re not inside the cave. They get hungry and head back into the Pacific to hunt for food. I can understand why some people feel they got ripped off if they were hoping to see them. I’ve seen reviews where the cashier selling the tickets is very clear that sea lions currently are not inside the cave, and there’s a small discount on the ticket price.

The cave is a fascinating experience, because not too many caves are accessible from the land, and if the sea lions aren’t there, chances are you’ll see them at another stop on the Oregon Coast. Stop at towns with a marina and chances are good that sea lions will be sunning themselves and barking at each other. 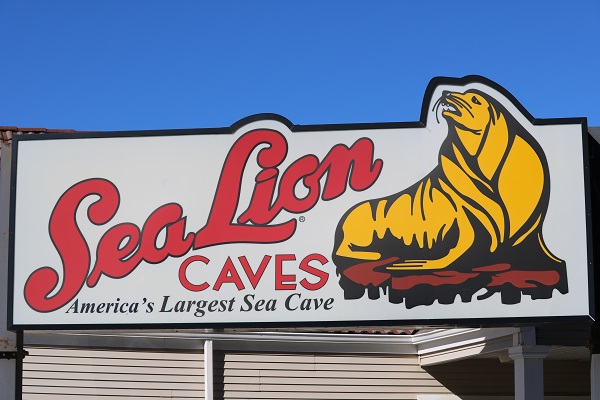 The Sea Lion Caves are easily accessed off Highway 101. From my southbound route I drove in and parked in front of the gift shop. If the lot is full, there’s additional parking on the other side of the highway. However, it may be a little dicey running across Highway 101. It’s a 50 MPH zone on the majority of the coast, with lower speed limits driving through towns.

Fudge and a hoodie!

Inside the gift shop I was pleasantly surprised to discover a fudge counter. It wasn’t here 25 years ago – and I love my candies! They offer free samples. Seeing as how today was my birthday, I asked to try the birthday cake fudge, a white fudge with sprinkles. It wasn’t really my thing. I also asked to try the chocolate caramel fudge, which I’d already planned to buy as soon as I saw it, but a little taste test never hurts just to make sure! The fudge lady boxed it up and wrote my name on it and said she’d take it over to the cashier for me. Seeing as how I’d already established a relationship with the fudge lady, and not being certain how honest the ticket seller might be, I asked if the sea lions were in the cave today and she told me no. I also asked if the jackets I’d been looking at were waterproof. In this part of the world we get a lot of rain. She said they were water resistant, but if I was out in the rain for awhile, they might not be a good option. 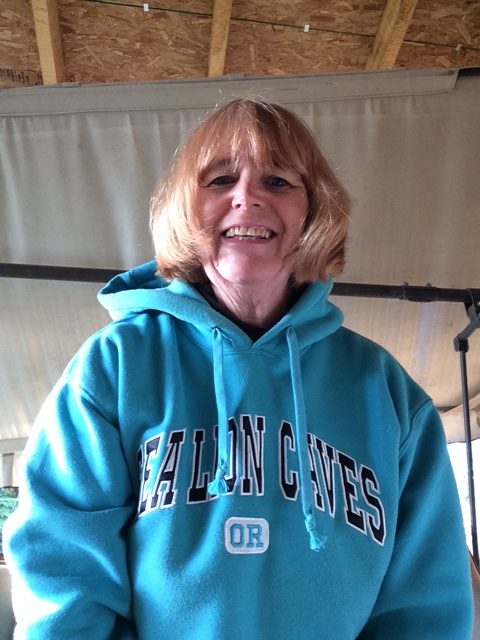 The gift shop is a wonderful place to buy Oregon Coast and sea lion themed souvenirs. There are clothing items, books, candies, and knick knacks. I tried on a pretty aqua blue hoodie, size large, that says “Sea Lion Caves, OR”, and felt like I was swimming in it. I was near the fudge counter and asked my new friend, the fudge lady, if she thought it was too large, and she agreed. She said the color looked good on me, and asked if there was a smaller size, so over my head with a medium. A little large, but not bad, I like my clothes on the roomy side. The Sea Lion Caves gift shop is a must stop on Highway 101, whether or not you plan to buy tickets to see the cave. There are great views including the nearby Heceta Head Lighthouse. 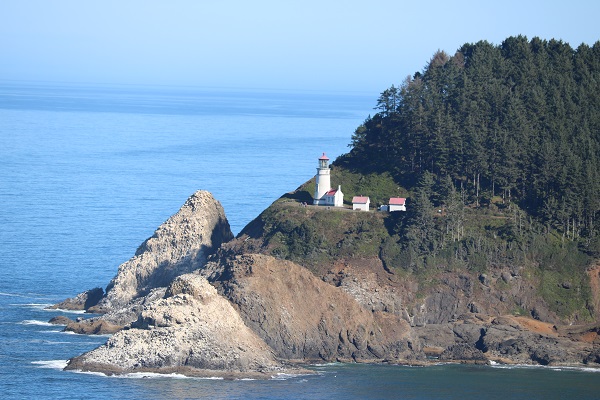 Over the years I’ve driven past the Dunes National Recreational Area and seen signs advertising dune buggy rides, but I’ve never gone. I’d assumed that I’d be renting a dune buggy and driving it myself, which doesn’t appeal that much to me. I’d read on another blog about a company called Sand Dunes Frontier with a big purple dune buggy doing tours for $14. Seeing as how today is my birthday, I’m planning to do the dune buggy things and see those dunes. 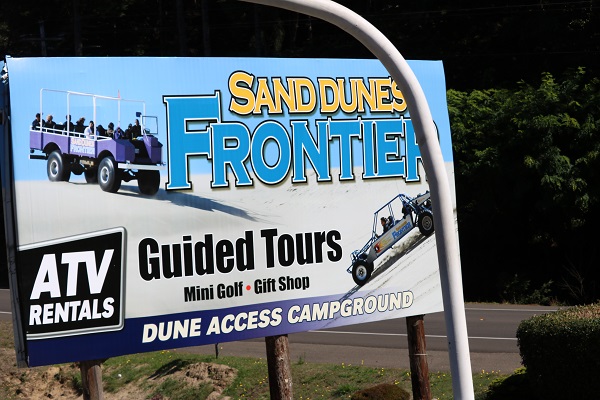 I’d already loaded it on my GPS before leaving home and that was my next stop after the Sea Lion Caves. A little bit of a birthday adventure. I arrived at the location and noticed they’d recently had a fire and their office had burnt down. The parking lot was mostly empty, though there were a couple of men ducking beneath the yellow caution tape on the burnt building. Towards the top of the parking lot is a garage and the door was open and a few people gathered around. I parked my car and walked up and discovered they were still in business, just relocated to their garage. The clerk said they were waiting for enough people to show up to get the big purple dune buggy rolling, they needed 10 people and I was number 5 or 6 to show up. Basically you just hang tight waiting for more tourists to pull in who’d like a tour of the sand dunes. They said they needed 10 people for weight purposes, but for all I know it could also just be they want a payload before taking big purple out.

After 20 minutes there was about 8 of us plus the driver and we were ready to roll. The driver said it’s a bit of a rougher ride at the back of the buggy, so that’s where I plopped myself down! And away we go! Or not. The big purple dune buggy didn’t start. The driver whips out his cell phone and a few minutes later a co-worker shows up with a charge box to jump start it.

And now we go to the sand dunes! 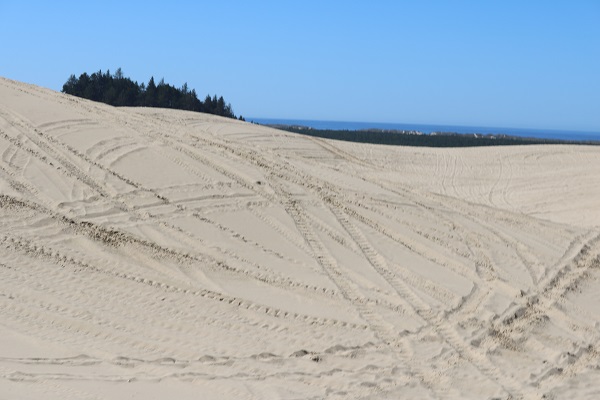 We drove along a wooded trail before arriving at the enormous sand dunes. Wow! Incredible. We weren’t driving on the beach, but we did have a good view of the Pacific Ocean most of the time. 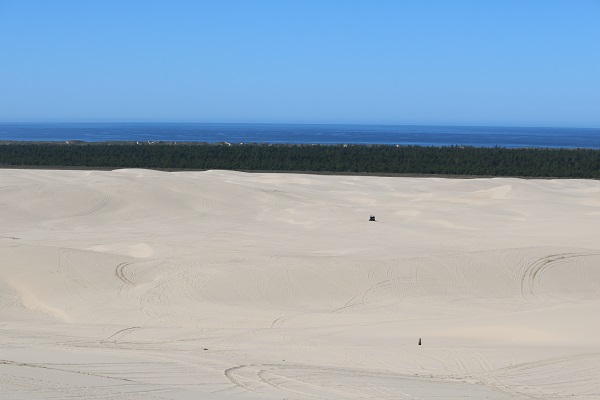 The driver said his first group out this morning it was foggy and they couldn’t see the water. I got the impression that generally it’s misty on the dunes and we were enjoying a rare sunny day with great views. There were a few ATVs moving around the sand dunes and one fellow crawling along the sand near a pond. I’m not sure what he was up to! Our driver gave us some great information on the ecology of the dunes and stopped a couple of times so we could take photos. During one stop we got off the buggy for a few minutes to walk on the sand. It’s about 30 to 45 minute tour, and at $14 very reasonably priced.

Oh man, what a great birthday I’m having! 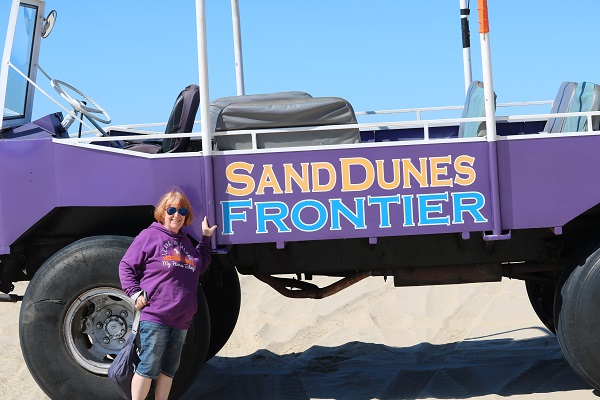 The next stop on my GPS was Cranberry Sweets in Coos Bay where I was looking forward to buying salt water taffy. 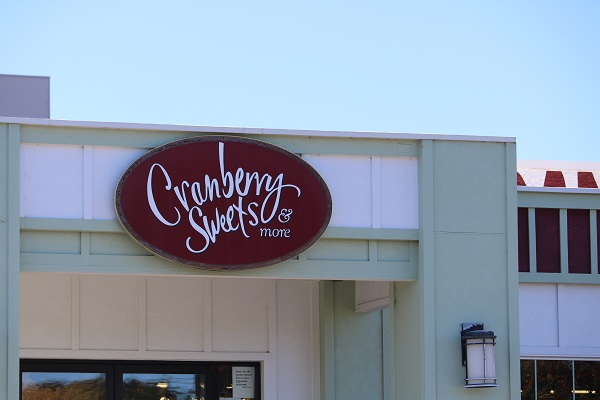 Inside they have all kinds of sweet treats besides taffy. Notably – popcorn! And little dishes with popcorn samples in front of every flavor. I got a big bag of Oregon mint with chocolate drizzle, caramel popcorn with pumpkin spice, and chocolate coconut macaroon. I also put together a bag of assorted salt water taffy. They sell chocolates, fudge, teas, syrups and other gift items. There are viewing windows to the factory so we can watch the production workers putting together our sweet treats. I took my purchases up to the cash register and the clerk said because it totaled more than $25 I could add a box of chocolate mint melties for $6.99. Yum! Throw it in the bag! 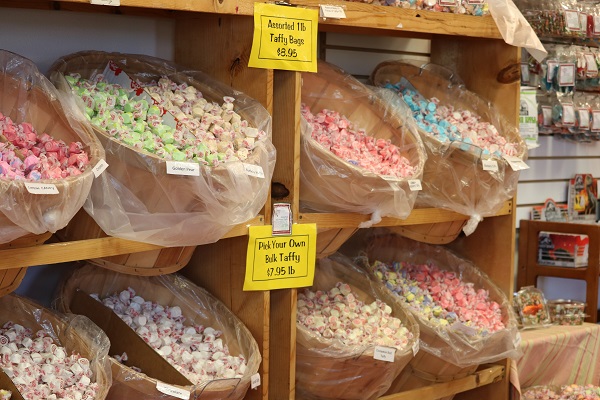 So far I’m having a really sweet birthday!

Check out my video to see the photos I took between Lincoln City and Coos Bay, Oregon!