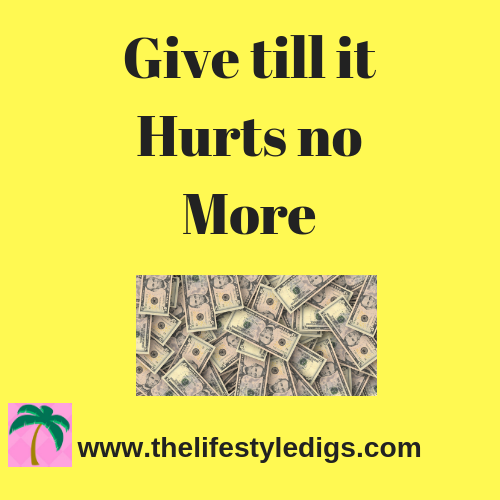 As the year winds down and everyone is busy with Thanksgiving, Christmas, and other holiday celebrations, it’s easy to forget about making a donation to a charity if you’re in a financial position to help.

You’ve heard the old saying: Give till it hurts.

The donation must be made by year end to receive a tax slip, which shouldn’t be the primary motivator to give to charity, but it’s nice to have.

They’re a lot of worthy causes out there that need monetary donations to help with their operating costs. There are so many organizations I wish I had the money to help, but I can’t spread myself too thin either.

Every year on the news an organization called the Union Gospel Mission lands on the news when they serve Christmas dinner to the homeless and disadvantaged. That’s how I heard about  them and started donating to them every December to help buy a few Christmas meals. Several times a year, I receive mail from the UGM to buy meal “tickets” and requesting donations, but my routine is to donate around Christmas.

A very good charity to donate to. One of my fears is being homeless. Imagine your worst fear, and fear can be a good motivator. Perhaps my donations to the UGM are buying time so I won’t become homeless.

Heart and Stroke Foundation of Canada

The other charity I donate to around Christmas is the Heart and Stroke Foundation of Canada. Probably for no other reason than my mother had a stroke and spent the rest of her life in assisted living. My father suffered from a series of small strokes, also known as TIAs. Every time he had one his short term memory and his legs became weaker.

Again, a great charity. It’s always in the back of my mind that I might have a stroke and I’d like to see progress made to help provide cures for people who have suffered strokes.

I’ve been giving to both these charities for many years, and donated again in 2018.

It’s habit to me.

One thing that annoys me about these charities are the mail outs I receive throughout the year requesting donations. The Heart and Stroke Foundation especially ups their game and sends me greeting cards to use for various occasions, including envelopes, pens and stickers. I think I’m more than set for the rest of my life on what I’ve stockpiled, thanks to them. Or maybe that’s “no thanks” to them because I didn’t want this stuff in the first place! One time they sent me a red scarf. A flimsy, unattractive scarf. These are useless items to me and I find it annoying that my donated money isn’t going directly to research, but is used for their marketing campaigns.

And now here’s my pet peeve. Many times these cardboard envelopes are too big to fit in my mailbox, and the postie leaves a delivery card telling me to pick up the “package” at the postal outlet counter. There’s usually a line up. Sometimes a really long line up, but I’m committed to finding out what this unexpected gift is. Disappointment when the postal worker returns to the counter with my package, and it’s more stuff from the Heart and Stroke Foundation that was too big to fit in my mailbox.

It’s annoyed me to the point that I’m considering ending my annual donations to them and replacing the Heart and Stroke Foundation with a different charity.

On the other hand, I fear if I stop donating, they might up their game even more and find new and annoying ways to send more unwanted stuff in a futile attempt to entice me back.

It has me wondering what my connection is to both these charities I’ve donated hundreds of dollars to both over the years. I hate to chop off a needy charity, but I’ve been thinking about it a lot lately, and I doubt I’m the only one out there rethinking where my charitable dollars go.

Who else gives a donation to a charity because it’s become automatic and you don’t think about it anymore? You just do it. If you’re like me, you’re asking yourself  – why do I it? Why do I give to this charitable cause? What makes it more worthy than another organization?

Is continuing to donate to a charity only because it’s been a habit for many years a good enough reason to keep donating? I’ve been giving it a lot of thought because I don’t feel a huge connection to either of these charities.

I think the Heart and Stroke Foundation has probably annoyed me enough with unwanted gifts while attempting to solicit a donation out of me (doesn’t work by the way), that it may be time to end my relationship, though I still feel an obligation to leave them a small bequest in my will.

I’m leaning towards changing my charitable donation to the Alzheimer’s Society of British Columbia. Again, another worthy charity and I’d sure love to see a cure for Alzheimer’s Disease and breakthrough medicine that would reverse the damage to patients who suffer from this awful disease.

Actually, after I wrote the above paragraph I went to the Alzheimer’s web page and made a donation. It just seems like the right thing to do. And keep doing. After all, my mother had Alzheimer’s Disease and for a few years I did donate to the society and then I chose a couple of other charities. Now it looks like I’m back. Maybe to stay.

Have you read the post about my unforgettable mother, Alzheimer’s Disease, and the cookbook I published as a legacy to her?

I’m a huge animal lover so I should be donating to a worthy cause that helps those who rely on humans to help them. I donate small amounts as I come across situations. For example, I was at the racetrack a couple of weeks ago and they sell 50/50 tickets to help the Standardbred adoption program for retired racehorses, an excellent charity, so I was more than happy to buy a few tickets. I also leave donations in jars when I’m visiting pet expos where rescue groups have set up booths.

Same thing in December when I see someone ringing a bell for the Salvation Army, I’ll drop a few bucks in the kettle.

I might not have much, but there’s always someone out there in a worse situation than mine and I feel a duty to help.

So, probably not the New Year’s resolution that the Heart and Stroke Foundation of Canada was hoping to hear, but I prefer my donations to go directly to the needy people or research to cure diseases than to send me stuff to motivate me to donate. There’s enough stuff in my house, and I struggle to declutter to keep my home in order.

As much as I hate to say it, I need to declutter charities that I feel disconnected with.

It all started with me questioning – why do I donate to these charities?

There’s a lot of good charities out there who can make good use of the money I donate.

So, what do you think? Should I let go of the Heart and Stroke Foundation and replace it with the Alzheimer’s Society? Or should I split the money between the two of them?

I’ll be back next year with an update.