Home Travel Getting Onboard the Island Princess in Fort Lauderdale 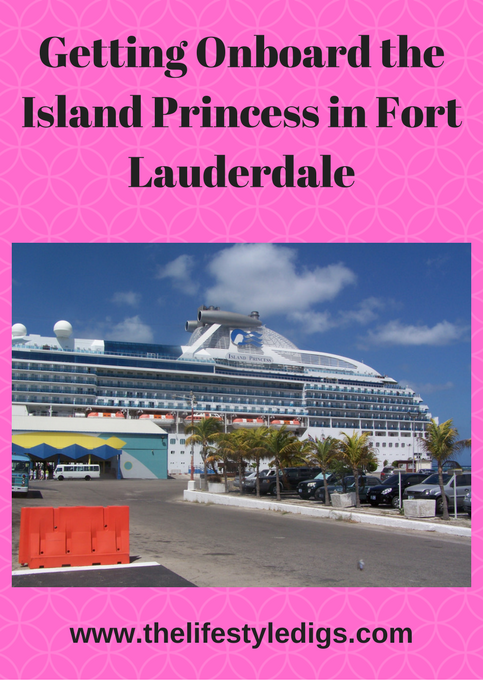 If you’re heading to Fort Lauderdale to catch a cruise ship, your best insurance is to arrive at least one day early. You never know when delays and missed flights or connections are going to happen. Don’t plan to arrive in town a few hours before the cruise ship departs. That cruise ship is leaving on time, probably around 5pm, whether you’re on it or not. If you miss the boat, you’re on your own nickel to get yourself to the first port of call to catch up. Give yourself some breathing room and allow for at least one overnight stay in Fort Lauderdale, and choose a hotel that offers shuttles that will pick you up at the airport and also take you to the cruise ship terminal. Many Fort Lauderdale hotels offer shuttles because cruise ship passengers are huge business for them.

Our hotel shuttle had us to Port Everglades around 11am on April 29 2010. Destination: Island Princess for an 18 day voyage – the Grand Panama Canal.

Our bags were taken by the porters who requested tips because that would be the last chance we’d have to tip them. Always a good idea to tip the porters so your luggage doesn’t end up in the drink!

We walked to the cruise ship terminal and a member of the port staff gave us numbers on plastic cards. We received number 2. We cleared security and filled out a form basically saying we were healthy and then sat in a large holding area waiting for our numbers to be called to begin check in.

When the 2 group was called we went to another room and check in was by cabin deck. Several desks were set up that said “Dolphin”, “Emerald”, “Plaza”, etc. We checked in quickly, received our room cards, took an elevator up, had our photos taken by the ship’s photographer, and proceeded across the walkway on to the Island Princess. Once aboard, a crew member swiped our card to confirm we were on the ship and took our photo for the computer’s database. We were on board around 12:05pm.

We went upstairs to the Lido Deck (14) and took a look around and wandered into the Horizon Court where lunch was being served. We went down to the Plaza Deck to see if our cabin was ready and it was, so we offloaded the laptop and went back upstairs to get a bite to eat, deciding to try the burger grill on Deck 15 above the Lido Pool. I had a veggie burger and fries and it was thick and mushy, not really all that good. I doubt I’ll try another one.

Here are a few veggie burger reviews from the Cruise Critic forums:

Wizard-of-Roz says: “While onboard the Sapphire my DH went to the burger spot, on deck, and requested a veggie burger…..YUCK!!!!! What they gave him was more like something you might see cow’s grazing on, whilest on the farm.”

rdsqlr says: “Worst veggie burger in the universe. Epically bad. If this should be your first intro to Princess food, you’ll want to jump overboard and swim to shore, to heck with the sharks and the rip currents and the hypothermia. So save yourself; say no to the veggie burger.”

Fabby50 says: “Another vegetarian here chiming in with SKIP THE VEGGIE BURGER! It was the first thing I tried on my first Princess cruise and still leaves a bad taste in my mouth” 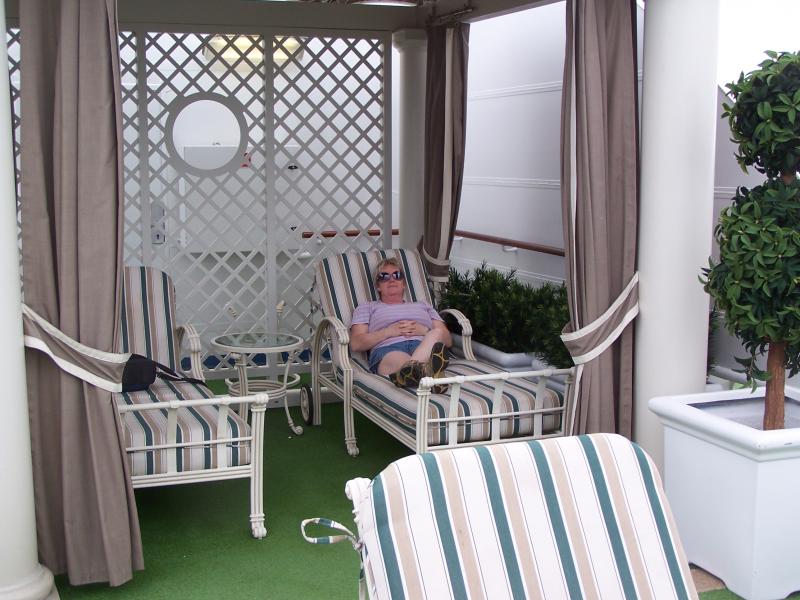 We explored the Lido Deck which also holds the swim against the current pool, the Spa, and the Sanctuary. The Sanctuary is at the back of the ship and costs $20/day or $70 on Panama Canal Day. You’re guaranteed a deck chair with a very comfy mattress and a quiet place to spend the day, complete with a swimming pool only available for the Sanctuary customers. We decide to save our money on this one but took a couple of photos here knowing it would be the last time we’d be allowed back here without forking over some money.

Then we headed back to our cabin to see if our suitcases had arrived. The two big cases with our clothes were there, but not our carry on luggage, where we’d stashed four 12 packs of pop (Ginger Ale and Dr. Pepper). As we were unpacking, our cabin steward, Enrique, stopped by to introduce himself and we had a nice chat with him. We requested an egg crate mattress for our bed and he had it on for us by the time we went to bed that night. We told him two suitcases weren’t there yet but we realized they were still loading suitcases on from the port. A little odd that two got separated from the other two, but not too big a deal. Embarkation day is very busy and sometimes the suitcases take awhile to show up. 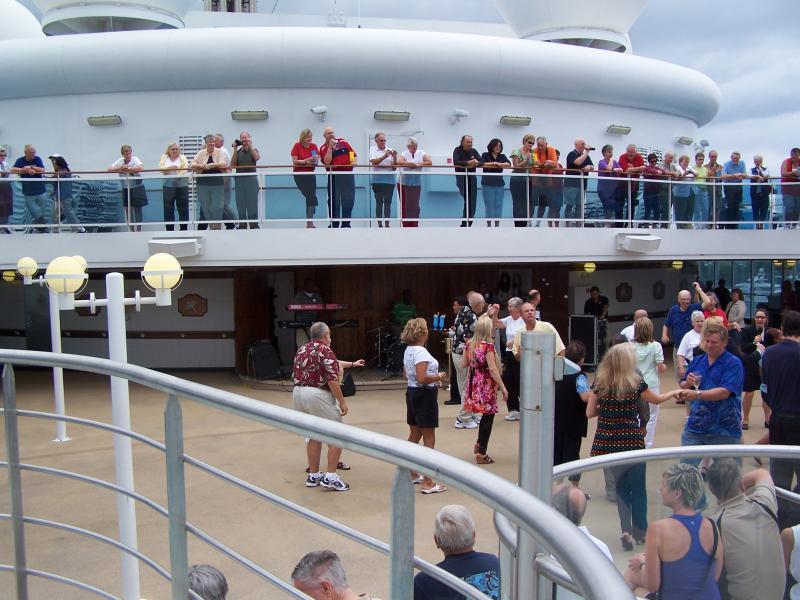 We continued our exploration of the ship and were playing a card game called Treasure Hunt where we had to go to various stations on the ship to get a stamp for our game card. At the 5pm sailaway party by the Lido Pool there’d be a draw for prizes for everyone who turned in a completed card. No, we didn’t win anything. The cruise director staff joined the singers and band trying to get everyone around the pool to get up and dance as the Island Princess left Fort Lauderdale. After the final prize was drawn at 6pm we returned to our cabin to get dressed for dinner. One of our missing bags had shown up by now so I was able to get some pop into the mini fridge in our room.

We arrived at the main dining room for dinner and were seated fairly quickly. We always choose anytime dining which means we are not seated at a specific time. Traditional dining has their choice of an early or late sitting in the Provence Dining Room on Deck 6, while anytime diners show up anytime between 5 and 10pm for dinner in the Bordeaux Dining Room right beneath on Deck 5. It’s the same menu. We never ask for a table for two because there is always a wait, and we’re quite happy being seated at a larger table with new dining companions each night. There was a small line up, tables were available, it was just a case of staff seating passengers and returning to the doorway to seat more passengers. But by 7pm the dining room was full and passengers had longer waits for a table. I had a shrimp cocktail, a chilled melon soup, and spicy Cajun crawfish vegetable crock pot. It was like a fish stew in a bowl with a crust on it. It wasn’t spicy at all and the crust was doughy. I wouldn’t order this one again. I made up for it by ordering the flourless chocolate cake for dessert and hazelnut ice cream. The chocolate cake was good but the piece was tiny. I’d need 2 or 3 pieces to make a decent dessert. The hazelnut ice cream had a bitter taste and then a very distinct hazelnut aftertaste. It was a little odd. I might try that again.

By the time we returned from dinner our last suitcase still wasn’t there. We alerted Enrique who went to search for it and returned a short time late with the missing bag.

In the Princess Theater we enjoyed a show that was split between the Island dancers and singers and a comedian. 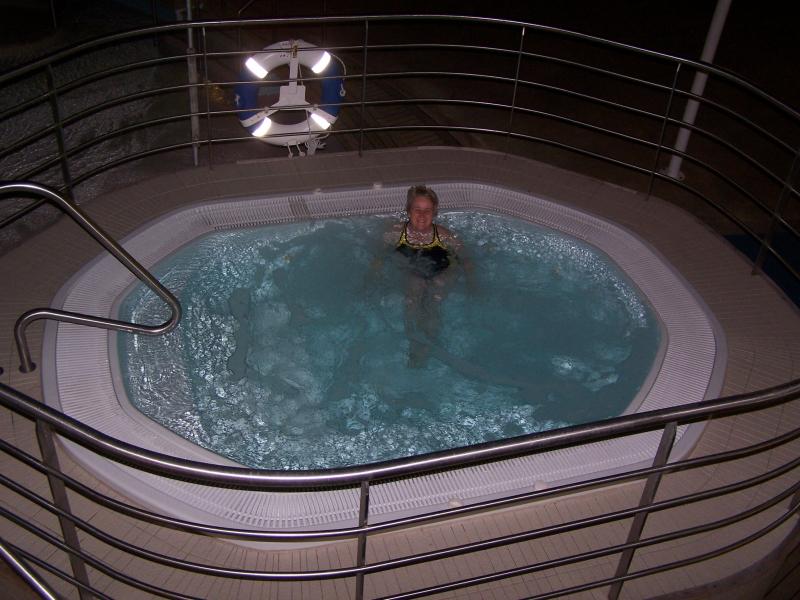 I ended the night up at the Lido swimming pool in a hot tub. Though lukewarm to coldish tub would have been a better description because it was cool. I didn’t try the other hot tubs until the next day but those were actually of normal hot tub temperature.