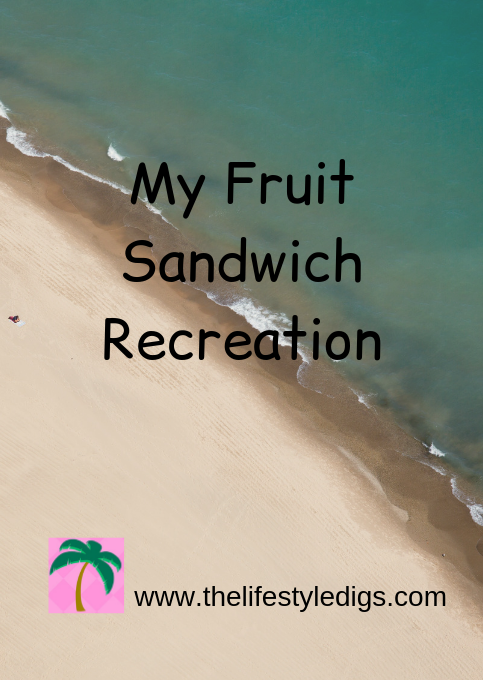 Around here, it’s not all pretty pictures and successful recipe recreations. Remember my Instant Pot popcorn fail? I share the good, the bad and the ugly! It’s my way of saying: don’t try this at home, kids! Leave it to the professionals. Us amateurs don’t have a handle on this!

A couple of months ago I went into a new cafe in Cloverdale, JJ Cafe, to get a bubble tea and sandwich for lunch. One of the items on the menu is a Japanese fruit sandwich. 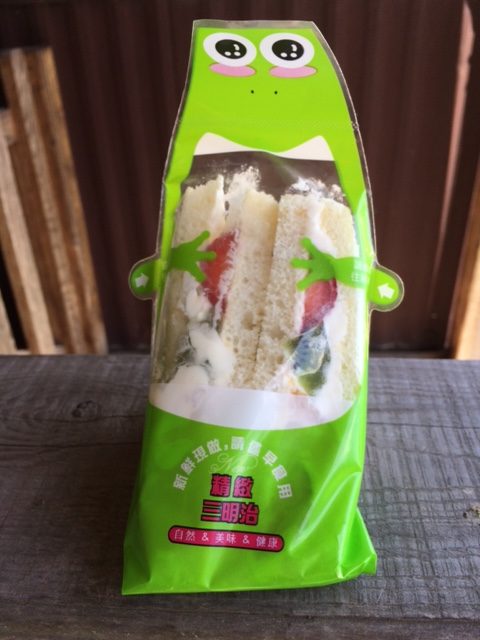 I’ll try just about anything once. Some things even twice! I bought a fruit sandwich with strawberries, kiwi fruit, and oranges, and it was pretty good. The fruit is arranged on the bread to be pleasing to the eye. I wouldn’t want to eat one everyday, but every now and then – Yummy! 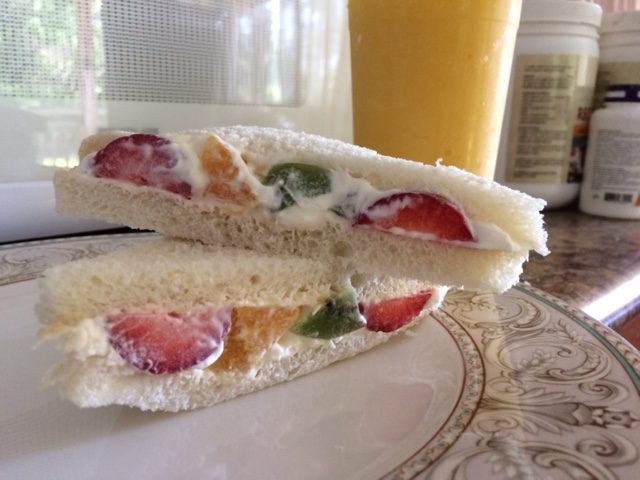 I liked the idea of a fruit sandwich enough to try to recreate it at home. The first level of difficulty was figuring out the bread. I don’t normally keep bread in the house anymore, and if I do it’ll be whole grain, not white bread.

For those times when I do make my own bread, I keep yeast in the freezer to lengthen the shelf life of it.

An online search for sweet bread recipe led me to a tasty looking Hawaiian sweet loaf. It was very similar to making a regular loaf of bread, except more sugar and it called for pineapple juice instead of water. I had to go out and buy the pineapple juice because I don’t normally keep it in the house. Now that I have leftover pineapple juice, I’ve already made some Hawaiian iced tea. Check out the recipe on my post 7 ways to kick start iced tea.

The day I baked it was a warm day, but there was a marine cloud cover. I put the bowl of bread dough into my car to rise, because it was quite warm in there.

After two hours I checked it and it hadn’t risen. Yikes! That hardly ever happens. The bread might not rise as much as I’d like but it never just sits there like this lump of dough was doing.

The only things I did differently were the pineapple juice instead of water, and I used pink Himalayan salt instead of regular table salt. I don’t think the salt would have mattered. Maybe that pineapple juice killed the flour or the yeast.

I punched it, though I wasn’t so much punching it down, as just punching it in frustration cause I was annoyed it hadn’t risen, and made one loaf and about 14 dinner rolls in a casserole dish. Back they go into the car hoping for the best that I’ll get a rise out of them!

Nope, not much difference. I went ahead and cooked the rolls anyway. The loaf I took apart and used a cookie sheet, I flattened them. I decided to make fry bread but bake it in the oven. 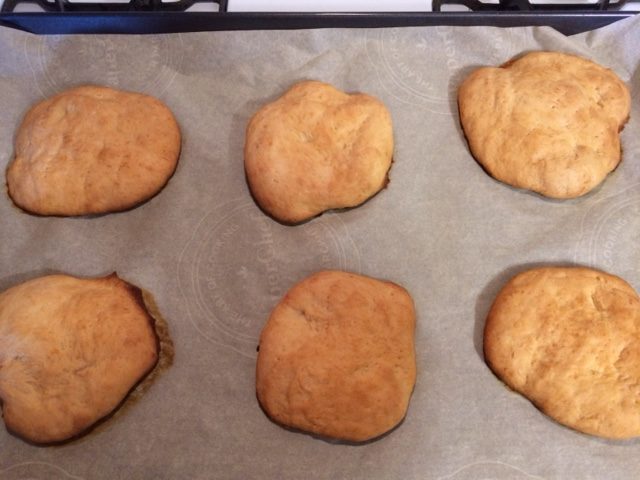 Predictably both the flat bread and the rolls came out rather dense. Not the light, airy loaf and rolls I was envisioning.

Putting together my fruit sandwich

I held back two of the fry bread rounds to make my sandwich the next day. The rest went into the freezer.

I don’t have whipped cream, but I do have vanilla Greek yogurt and decided that would be my spread. 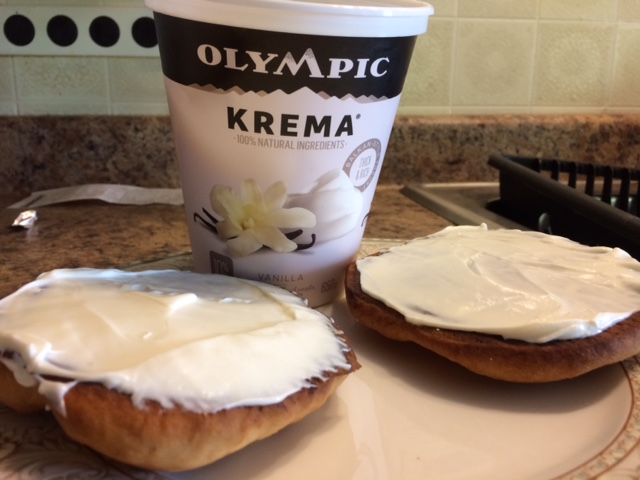 I’d purchased a peach at the produce store to use in my fruit sandwich and defrosted strawberry slices. If I’d found a ripe kiwi fruit too I’d have used that too, but all the ones I checked at two different stores were tough. Pass.

Not too pretty to look at, would you agree? Looks kind of wobbly! 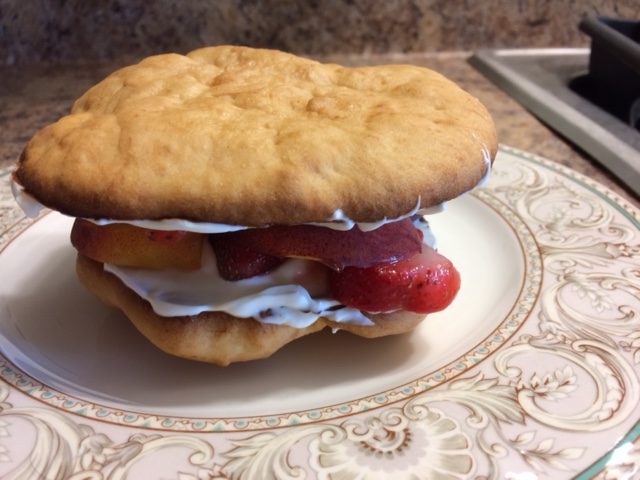 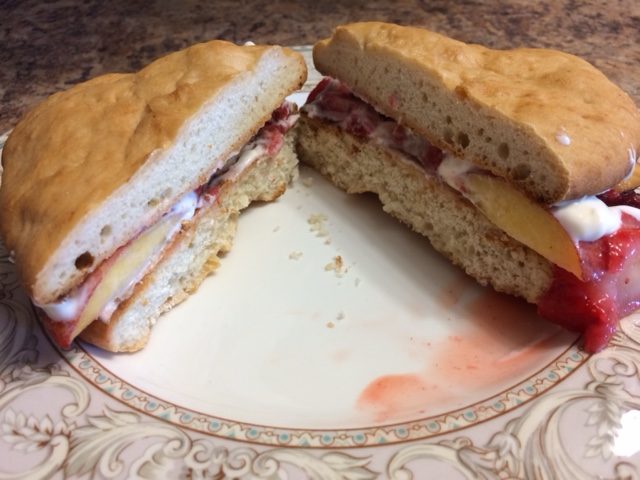 The fry bread was a really bad choice. It was kind of tough. Maybe it’d have been better if I’d eaten it the same day I baked it. When I cut it half, it was pretty sloppy. It tasted OK once I decided to eat it as an open face sandwich.