Have you ever thought about something you’d hate to end up becoming? Then you have to put a plan into action to stop it from happening. What is your worst fear? Can that fear motivate you into action?

I’m one of these women who has spent a lifetime struggling with weight. I’ll lose weight. It might stay about the same for a few years, then it creeps back up, then repeat.

I’ve been about the same weight for the past 10 years. It might be up by 10 pounds, then come back down a few pounds. Forget the extra 10 pounds that comes and goes. I need to lose about 25 pounds. And if that extra pounds is on me? Well, I hate to say it. Losing 35 pounds or so would get me to about the right weight. But keeping it there is another story.

It is true. You lose weight. And then when you gain it back, you gain more back.

Like many others, I’ve tried following diet plans, I’ve taken weight loss supplements, and no change. Or maybe down half a pound to a couple of pounds. If I was going to have such a small weight loss, I’d probably have been able to do that on my own without spending $20 or $25 for supplements.

I’m a vegetarian. Well, no, I’m actually a pescatarian. I eat seafood, but generally I follow a plant-based diet. Sounds healthy enough, right? Well my downfall is sweet treats. I love chocolate. I love desserts. I love cookies. I love ice cream treats. You see the picture. If I wasn’t a vegetarian and if I ate more fried foods, I’m sure my weight would be a lot higher. Same thing with being moderately active. If I wasn’t getting exercise walking dogs, riding horses, and riding my bike, my weight would be creeping even higher.

We all know what we have to do to lose weight: eat less, exercise more.

So what’s the problem?

I love my chocolates and desserts.

I hate having a muffin top. I’m uncomfortable with the extra weight around my middle. Even though I know it’s unhealthy, I just can’t stick with anything long enough to lose significant weight. I lack willpower.

Or do I really lack willpower? I’ve lost weight before.

My most successful weight loss program was the Beverly Hills Diet when I was about 25. I weighed about 125 and my weight dropped to 104 at the lowest. A few months ago I could only dream of being 125 pounds again! I’d be in a normal BMI. Now it’s teasing me by doing the plateau thing in that area.

This past summer I went in to see my doctor, something routine, I’m sure. I get my blood tested whenever I think to go in and ask for a requisition to check my iron levels. Or maybe arthritis. My rheumatoid arthritis levels are very high, though I don’t have the pain or the symptoms of a person suffering from this awful immune disease. Yet. Maybe that’s still ahead of me.

This time the doctor put in for a lot of other blood testing, I guess what you’d be requisitioned if you were going in for a physical. The clinic I go through only calls if there is something the doctor wants to discuss with the patient. I got the call. Nothing urgent, but the doctor would like to see me. It took me a few weeks to go in.

When I took time off work one morning and went to the clinic, it was a long wait so I left and went back to work, losing about 45 minutes pay for nothing thanks to the old time clock at work. A day or two later I went in to the clinic after work. There was a long wait, about 90 minutes, because only one doctor was in, but I got my name in and went for a walk. Stopped at Dairy Queen to try one of those new Jurassic Blizzards. Nothing to write home about. It wasn’t very good. I regret it.

When it was my turn at the clinic, I saw a doctor I’ve never seen before. A nice woman who spent some time talking with me. Usually I’m in out in a few minutes after the doctor enters my room.

I got the old my rheumatoid arthritis levels are high. We discussed how I’d already seen a rheumatologist two years ago who ran a bunch of tests and is puzzled why my blood level shows I have it, but I have no other symptoms.

Then the doctor throws a shocker at me. She tells me my blood sugar is getting high. I’m still in the normal range, but I’m closing in on diabetes territory. I don’t believe we discussed my actual weight, but she said if I lose weight that will help bring the blood sugar level down. She talked about willpower and portion control. I asked her about acupuncture and she seemed kind of dismissive, but if I wanted to try, and seeing as how my plan will pay for it, then go for it.

Fear is a great motivator for weight loss

I don’t want to be a diabetic. It seems like the only person who can stop that train wreck is me. I need to work on willpower and portion control.

For years many of my dinners and often lunches are salads. Every week I buy a bag of spinach and when it’s gone I alternate with a bag of coleslaw. These I buy at a local produce store along with other fruits and vegetables so I can eat my 5 to 10 servings of fruit or vegetables daily.

When I bought my car, one of the things the dealership was doing for me was putting on a new tire. It took a few weeks of me bugging them before we got it done. While I was in the service center I chatted with the man who booked me in. He told me he’d lost a lot of weight recently and mostly what he’d done was cut out potatoes, pasta, and bread from his diet. No easy feat for an Italian!

To make sandwiches that I eat several times a week, I always buy whole wheat breads, or make bread myself. Pasta I might eat a couple of times a month, and not usually with tomato sauce. Maybe a baked potato for lunch instead of a sandwich. If it worked for him, I can cut these items out of my meal plans for the most part too.

I haven’t bought or baked bread in months. However, I’ve had the occasional sandwich when dining out. Check out my post about Crescent City for the scrumptious shrimp melt I had for dinner.

The acupuncture didn’t work out for me. One visit plus supplements is close to half my monthly food budget.

So, what did I do? I cut all the sweet treats out of my diet. Except old habits die hard. After a few weeks I started sneaking the occasional treat.

It’s all about moderation. Eat one cookie instead of five.

The doctor said to think of my dinner plate in sections. Half the plate is to be vegetable and the other two sections, one quarter of the plate each are protein and carbs. I’m pretty good at doing that. Half my plate is covered in spinach, a few baby carrots, maybe mushrooms or tomatoes, whatever I have at home. The protein is usually a can of tuna or maybe sardines or herring. At dinner I might rotate in a baked salmon or veggie burger, just the patty, no bun. The carbs? Usually crackers, no more than 60 calories worth. Sometimes a sweet potato or a couple of small nugget potatoes.

How’s it going for me at work? I live a few minutes drive away so I always come home at lunch to get my dogs outside to potty and eat, so nobody at work really knows I’m doing anything different. I didn’t bring in Halloween candy this year. That might have been noticed but nobody mentioned it.

One day a co-worker bought a dozen donuts from Tim Hortons and kept telling me to grab one. I checked them out and my favorite Boston Cream wasn’t in the box. Normally I would just grab another donut. Ironically the Boston Cream is the lowest calorie donut at Timmy’s. Anyway I mentioned something like too bad my favorite donut isn’t in the box, and I just had lunch and I’m pretty full right now, so I don’t need a donut. That worked once. She’s very sweet and has come in twice since then with a box of assorted donuts, specifically asking the staff to make sure a Boston Cream is put in the box. So I feel obligated to take it.

And oh yes, it is delicious!

I have very generous co-workers who bring me my favorite chocolate bar – Mr. Big. So far I’ve eaten one – really hungry that day! – and it was a two pack, so good on me for only eating one. Mostly the Mr. Bigs are taking up space in my freezer and I have two in my desk right now – coming home soon to freeze! 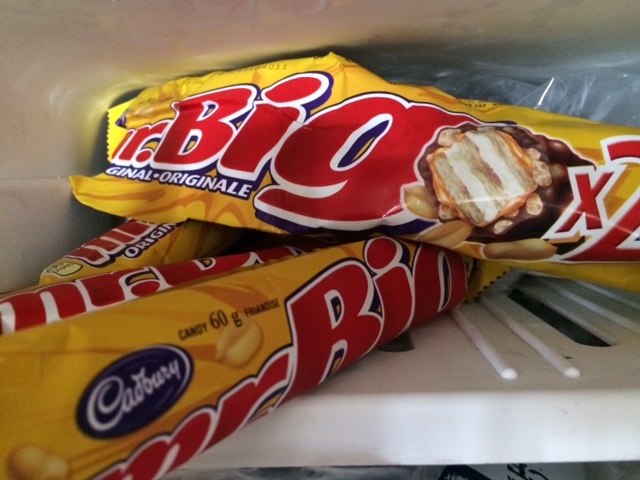 At the two month mark, and down about 15 pounds, I returned to the clinic because the doctor gave me a requitision for more blood work after 6 weeks. They didn’t call me, but I went in anyway. The doctor I saw, who I’ve seen many times when I go in, noticed the blood sugar wasn’t checked off, so I got another requisition and back for more blood work. Ouch! I didn’t get a call, so I’m hoping that means the blood sugar has dropped. Or at least hasn’t climbed. I feel healthy, so I hate to just go in and see what my blood results are when the doctor’s office didn’t feel they necessitated a consultation.

After a little more than 3 months of monitoring my weight I’ve lost 25 pounds. I might have lost a couple of pounds before I started keeping track on a spreadsheet.

Check out Motivated by Fear: my Weight Loss Plan. I talk more about what I’ve been eating to help with weight loss and some of the yoga videos on Youtube that I do for exercise.

Have you found fear to be a good motivator whether it’s for weight loss or something else in your life?

8 thoughts on “Fear is a Great Motivator for Weight Loss”