Home Living At Home... Downsizing or Why doesn’t Anyone want your Junk

If you’ve ever been in a position of downsizing due to needing money or moving, you know the hard truth.

No one wants to pay money for your treasured stuff.

They might not even want your prized possessions for free!

If you have parents who are downsizing their stuff, they might have items of sentimental value that you’d like, but you probably don’t need another couch, table, TV set, or dishware. People have different tastes and styles when it comes to decorating and outfitting their homes. What your parents liked, you might not like. Same with a stranger’s belongings. They might not be your thing, but yet these strangers still list them for sale on Craigslist.

What about electronic items like when you upgrade your perfectly good computer and printer that are a few years old. No one wants them. They want new electronics.

Are some of these things antiques? Or are they just old? There’s a big difference between something that might have some value to it and something that is past its prime. Does it even seem like people want antiques anymore?

Forget antiques. Let’s talk old furniture that is clean and in good shape and has lots more life left in it. Even charitable organizations don’t want furniture anymore.

I’ll give you a specific of something I own that I probably can’t unload on anyone else even though I don’t need it anymore. It’s a really cute saddle I bought in Mazatlan, Mexico in 1983. It’s seen the back of a horse a few times only for me to discover it’s not that comfy and was better suited for living room décor. But not recently. It’s spent the last decade or so in the storage room. Not everyone wants a Mexican saddle on display in their house. Or on their horse. I’ve dragged it around through more residences than I can count. I think I spent $100 for it and I doubt it’s appreciated in value. 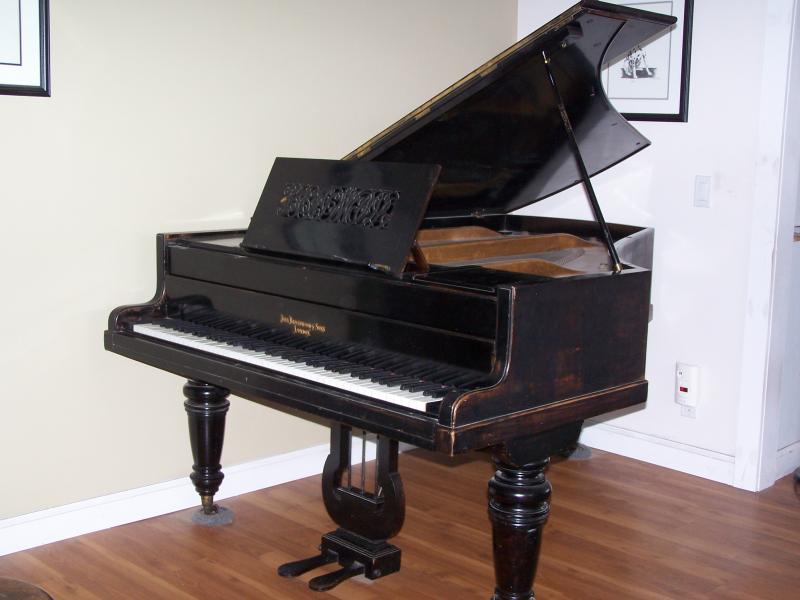 I’ll give you some more specifics. In 1999 my father gave me a grand piano he and my mother purchased in 1984. My mother had been in a long term facility for about a year and my father doesn’t play the piano, so it was handed down to me because I play. I’ve had that piano in my possession longer than they had it. It’s a beautiful piano, built by Broadwood and Sons in 1895. And that piano is heavy. Weighs around 1000 pounds so I can’t move that sucker myself. I have to call in movers. Kaching kaching. They have to book 3 movers whenever there’s a grand piano involved. They dismantle it for the move so these guys are experienced at what they do. I’ve used the same moving company since 1999, though the movers might not be the same guys. It’s in a storage room in my house right now too, disassembled. I live in a very small place, there’s no room to set it up. In fact there’s barely any room for most of my belongings. Fortunately, my little house has an addition of a 16’ bedroom and most of the contents of a 3 bedroom house are stored in there, so at least I’m not paying additional money to rent a storage unit somewhere.

That piano has almost become an Achille’s heel for me.

This is the unfortunate reality of divorcing in your 50s, selling your house, and trying to find something else to rent on a budget. I know one day I’ll move and get all my belongings out where they should be.

What else is in that storage room you ask? Besides a bunch of stuff I can’t sell or give away because nobody else wants it. And I’d hate to get rid of something if it means I need to buy a replacement down the road. Besides looking like a hoarder’s dream come true, what else is packed in my storage room?

Two hutches. Why two, you ask? I got them both from my father at different times. And yes, they’re very handy. One of them displays my granny’s good china and the bottom part holds my good silver and tablecloths, and similar items. The other hutch seemed to gather knick knacks and became a storage spot for office supplies. That second hutch I could probably give away if anyone wanted it. I did try to sell one hutch, the one that held granny’s china, after deciding to hold on to the 2nd hutch because it was a bit smaller. However, I had no takers. At $100. I did have one person who said if I wanted to give it away, she’d take it. It’s a really beautiful hutch. I don’t want to give it away. But clearly if I couldn’t sell the nicer one, the second one has no hope in hell.

And speaking of selling stuff let’s talk bedroom furniture. I bought a used bedroom set for $900 in 2007. Very nice set. A king size bed with 2 nightstands, a tallboy dresser, and a regular dresser with a hutch on either side of the mirror. I put the whole thing up for $400 and kept dropping the price, eventually selling it for $100. The really crazy thing is when I still had it priced for $400, I had various people contact me through Craigslist asking if I’d separate the unit and offering me various prices. For everything, including the mattress which I would have given away. If I’d done that I’d have made around $300. But no, I figured keeping it as a set would work better and $100 was as good as I could get after a year of having it up for sale. Here’s the crazy thing. In the divorce settlement, my ex claimed the bed was worth $4000! LOL! Old bedroom sets do not increase in value.

And what am I sleeping on now, you ask? A very simple double bed with a bookcase headboard and it has a matching dresser and tallboy. The tallboy is in the bedroom. The other dresser is in the storage room because there’s not enough room in my tiny bedroom. My parents bought the set when they married in 1958. The thing is old but not vintage or antique or any other label that gives it value. It’s served its purpose for over half a century and it’s going to keep doing its job for more years to come. I don’t really have any sentimental attachment to this bedroom set, even though it’s been in my bedroom since 1973 when my parents bought a new set. But, I’m frugal. I don’t see a need to buy a new bedroom set when this one does the job just fine. It’s seen a few different mattresses over the years, though!

Also in the storage room are my three bookcases and boxes and boxes of books because my place is too small to set them up. The bookcases are very nice. My ex made them and I have no sentimental attachment to them. If I had other bookcases that would work just fine for me, I’d have no problem giving these ones away. Even when I move again I’ll probably still use these bookcases because I don’t see the purpose of buying something new when what I have still gets the job done.

If you’re curious why my ex didn’t want some of this furniture, he took what he wanted (read into that – what he perceived to be of any value), and left the majority of household goods for me to deal with. Thanks a lot jerk!

The other stuff in my storage room is probably the same as what other people have: sports equipment and Christmas decorations. Oh and two tables and the chairs that go with them. And yes, before you ask, those tables and chairs were in my parent’s home and got passed on to me at some point. I could get rid of one of those tables if I have to, but I suspect I won’t be able to give it away and it’ll end up going to the dump. I hate sending perfectly good stuff to the landfill, but what can you do when you can’t even give it away?

The big question is: what do you do whether you’re moving or buying new stuff and need to find a home for your old stuff?

Start by asking family and friends if they want it and ask them to get the word out.

You could hold a garage sale.

You can put your things up for sale or for free on Craigslist.

You can look on Freecycle for groups near your home to post your items. https://www.freecycle.org/

You can drop off items at Goodwill or local thrift shops. You might want to phone first or check their websites to see what items they’ll accept and what they won’t.

Check with churches and battered women’s shelters. They’re often looking for donations of household items for low-income people who are starting over.

Have there been any tragic fires in the news lately where the residents lost everything? Often they’ll take donations of household items.

Here’s an interesting article I found on Yahoo about things to get rid of now, more from a decluttering point of view.

Have you been in a situation where you want to sell or give away your stuff and have no takers? What did you do?