Home Travel Don’t Hang your Underwear on a Spanish Balcony 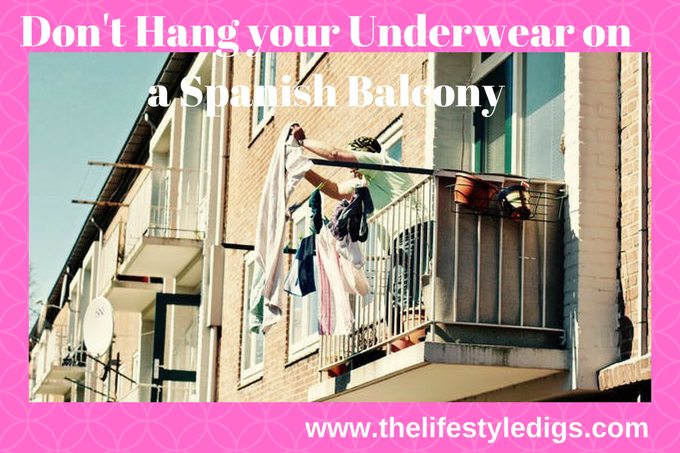 There’s a story on my friend KemKem’s blog where she talks about moving into her new apartment in Valencia, Spain. The laundry facilities got me remembering something that may or may not be the law in Spain – and that’s the legality of hanging your underwear to dry on the balcony. Better safe than sorry, so when in doubt, don’t hang your underwear on a Spanish balcony.

When I was younger I worked as an au pair in Madrid. We lived in a tiny apartment. I don’t recall for sure, but I believe the parents owned the apartment as opposed to renting. It doesn’t matter. It was the tiniest 3 bedroom apartment I’ve ever been in. My first impression was shock that 4 people, soon to be 5 including me, were living in this tiny space. Walking in the front door, a tiny kitchen was to the left. There was an oven, fridge, sink, counter, and cupboards. There was a door that led to a tiny balcony. The family had a washing machine, and here I’m really foggy on remembering whether the washer was in the kitchen or outside on that back balcony. I’m pretty sure it was outside. That kitchen was so small that if 2 people were in there it was really crowded. I don’t think there was room for a clothes washer inside the kitchen.

Straight ahead when walking into the apartment was the combo dining room/living room. They had a table and 4 or 5 mismatched chairs. There was a couch and an easy chair and a TV set. A sliding door led from the living room to a larger balcony overlooking the street.

From the dining/living room there was a short hallway to the living quarters. On the left side of the hall was the bathroom and girl’s bedroom. On the right side of the hallway was my bedroom and the parent’s bedroom. All were very small rooms. The girls had a bunk bed. The father was a total weirdo who ignored his daughters, preferring to go into his bedroom, close the door and work on crossword puzzles. He probably put the bunk bed together. It was very wobbly and caused me to be concerned for the girls’ safety.

I helped the mother with the laundry and there was a clothesline on the large balcony where we hung the clothes to dry. Actually there may have been 2 or 3 lines strung out there. They didn’t use the balcony for anything else. They didn’t have table and chairs or a BBQ out there.

After I quit working for them, I met up with an English lady at her apartment for lunch one day. She was the head of the British school in Madrid, or maybe it was the American school. Either way it was an English speaking school for children of ex-pats living in Madrid. She lived in a very nice, luxurious apartment and I noticed she had a washer and a dryer. I told her about the family I lived with who only had a washing machine and how the mother didn’t want me hanging the underwear from the front balcony.

She said there might be a law against hanging underwear from the front balcony, whether it was a city bylaw or Spanish law country wide, or even a law at all, she didn’t know. She told me about two female British school teachers working at her school who shared an apartment. There was a washer but no dryer, and that seems very normal for Spain, that clothes are typically hung from balcony clotheslines instead of tumbling in a dryer. One day there was a knock on their door and a policeman stood  there. He pointed out their laundry drying on the balcony, specifically their underwear, and said it’s against the law for undies to be visible from the street. He fined them, and I believe the amount was around $20, which would be fairly significant amount for the 1970s in a country with low wages. They paid the policeman and moving forward I suppose they hung their underwear from the back balcony or maybe over the curtain rod in the shower. An expensive lesson for them to learn: Don’t hang your underwear from a Spanish balcony.

My friend figured they were victims of a policeman who spotted an opportunity to make money off a couple of unsuspecting women. Especially when he realized they were foreigners and wouldn’t know one way or the other if there’s a law not to hang your underwear from a Spanish balcony. That “fine” probably bought his dinner that night!

But after she heard my story, she wondered if there really is a law, subject to being fined, if you’re caught hanging your undies on a balcony where they can be seen from the street.

Is it modesty or is it the law? Play it safe and keep your money in your pocket. Don’t hang your underwear from a Spanish balcony.

Have you traveled to Spain or do you live there? Have you seen undies drying on a balcony? Weigh in on this modest issue and let us know what you think.