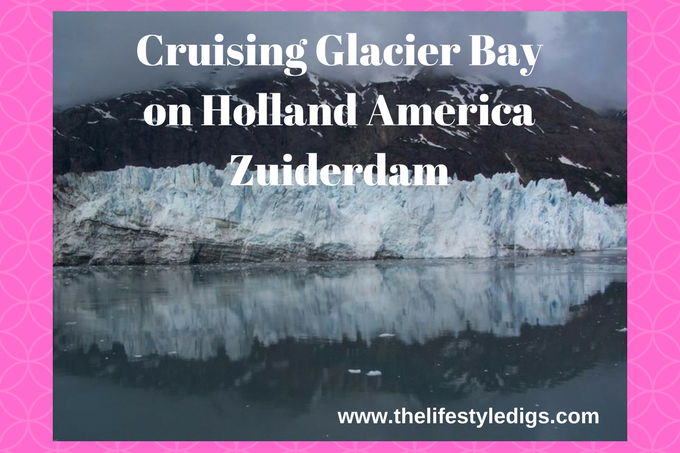 Wednesday on board Holland America’s Zuiderdam was cruising Glacier Bay National Park in Alaska. We arrived in Glacier Bay around 7am and saw some spectacular scenery with glaciers and sheer rock cliffs that had once been covered in ice before breaking off into the water. Two park rangers came about the Zuiderdam to ensure the cruise ship is not doing anything that isn’t environmentally friendly and entering areas they’re not allowed to go, and to educate the passengers about the national park. They spoke over the public address systems for several hours. Not continuously because they didn’t want to disturb the wildlife, but often enough to let the passengers know what we were looking at. 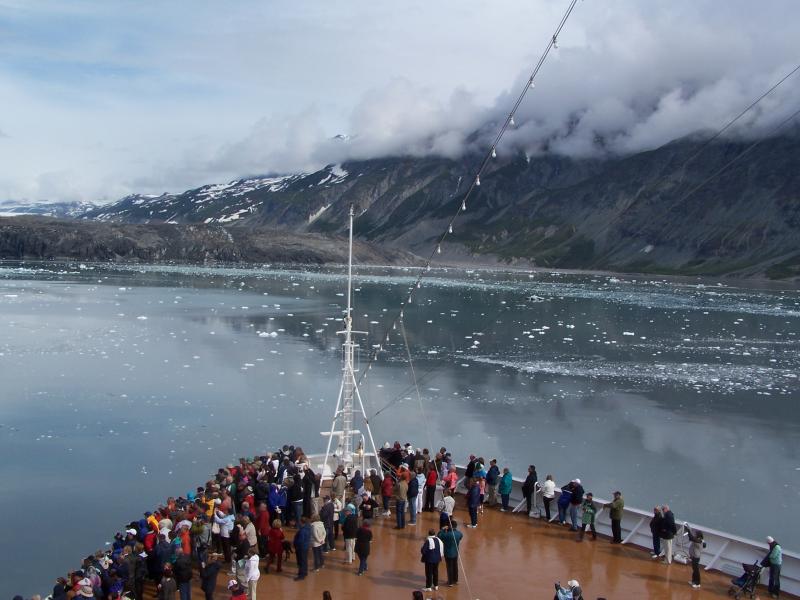 The Zuiderdam opens up the front bow area of the ship so passengers can get a good look, and man is it crowded! Especially on the side with the majestic scenery. Get there early for a spot on the rail! 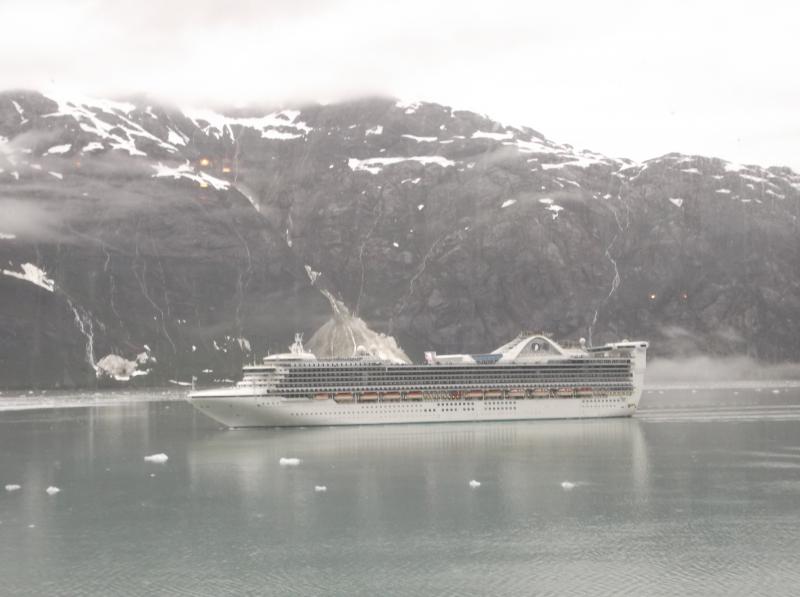 Only one cruise ship at a time at the Margerie Inlet, and the national park issues permits and specific times to the cruise ships to enter and depart the area. A Princess Cruise ship was leaving just as we were arriving. 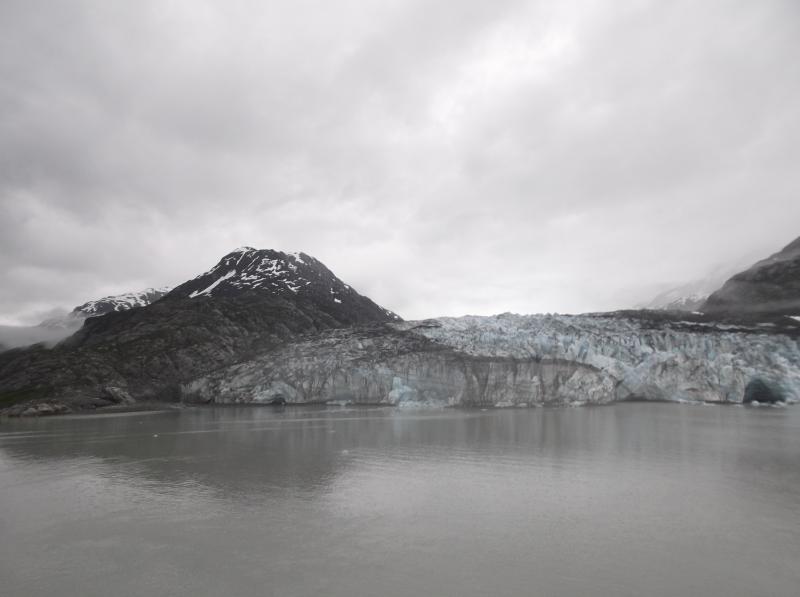 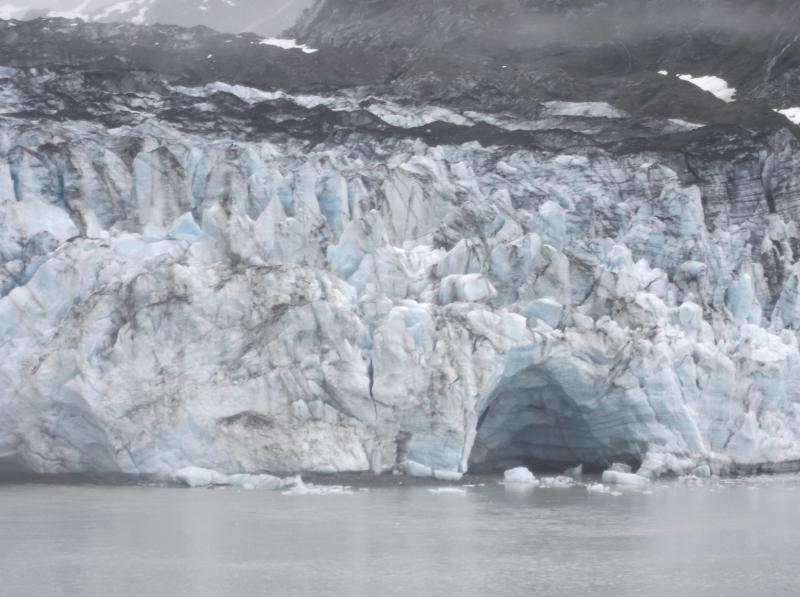 Around 10:30 or 11am the Zuiderdam came to the Margerie Glacier, and stayed there for about an hour. After half an hour in one position, the ship did a 180, turned around, and stayed stationery for another half hour. 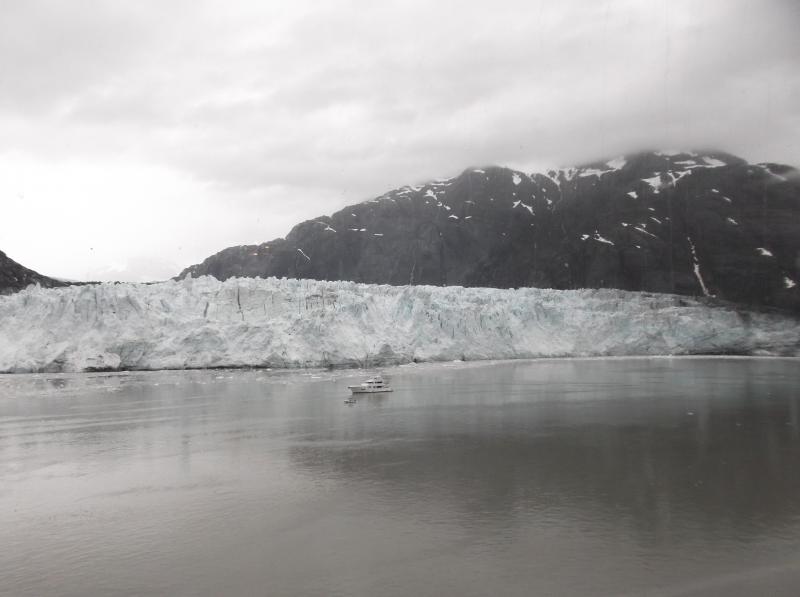 While viewing the Margerie Glacier, we witnessed a few calvings. One of them must have been several tons of ice that calved off. It created a huge splash that rocked the Zuiderdam with the wave action. Later on the park rangers said that was the largest calving they’d witnessed in four years. The noise from the glacier calving is enormous. Think of thunder or a freight train magnified multiple times and that’s the warning you have to look around and see which part of the glacier is coming loose to drop into the water. 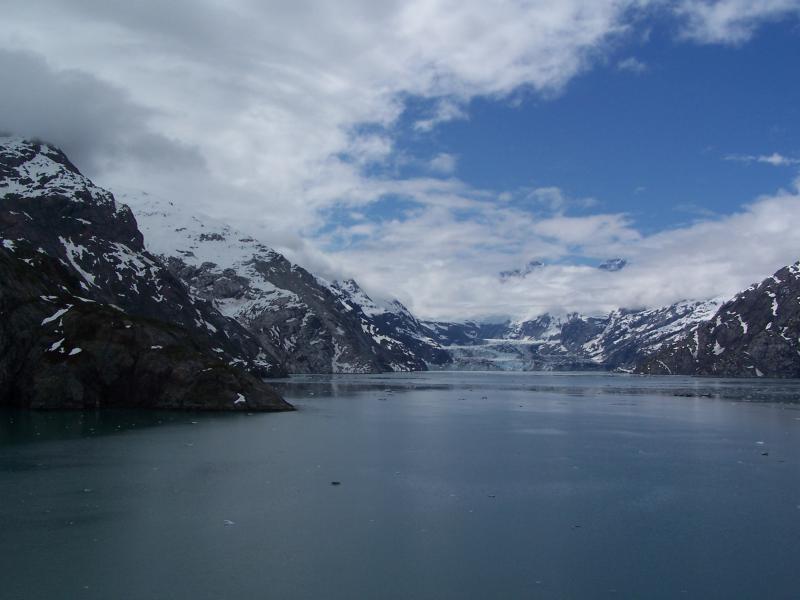 After an hour of viewing the Margerie Glacier the Zuiderdam moved on to the Johns Hopkins inlet, another beautiful sight, and we stayed there for about half an hour. We couldn’t go into the inlet because of the environmentally sensitive area, mainly seals and their pups, and they’re quite visible lounging on the ice floating on the water.

Wow! This national park has some incredible scenery. We even saw a bear on the beach a little later in the afternoon, not to mention several whales in the area.

The second cruise I did with the Zuiderdam, after we left Glacier Bay, we were socked in by fog and couldn’t see Johns Hopkins inlet and glacier. The Zuiderdam blew the fog horn every 30 seconds or so, that’s how thick the fog was. And that cruise was early August.

Throughout the day the Zuiderdam held various seminars, mostly about Glacier Bay, but also art, a preview of shopping in Ketchikan, a camera workshop, flower arranging, and a craft class.

Glacier Bay day is a formal night for dining in the Vista Dining Room. It was also the Farewell Dinner, even though we were only halfway through the cruise, oddly enough. That evening playing in the Showtime Theatre was comedian Jeff Burghart. 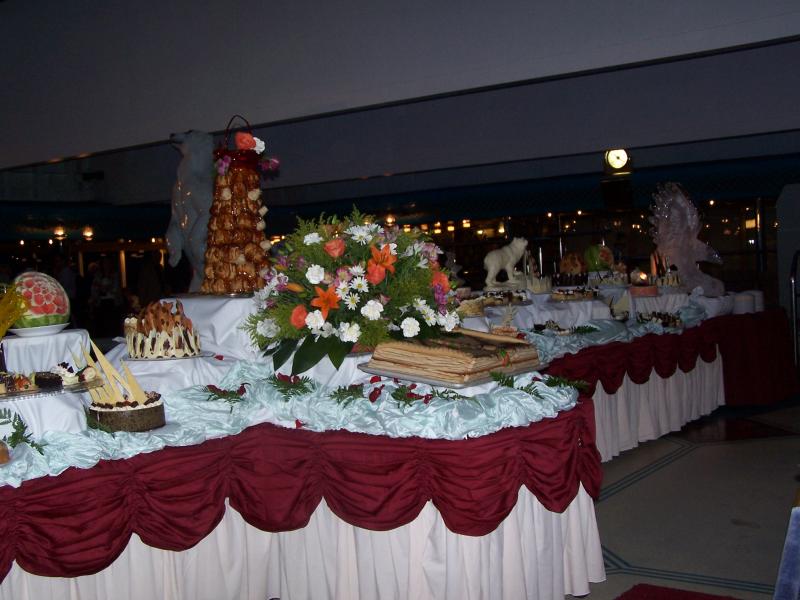 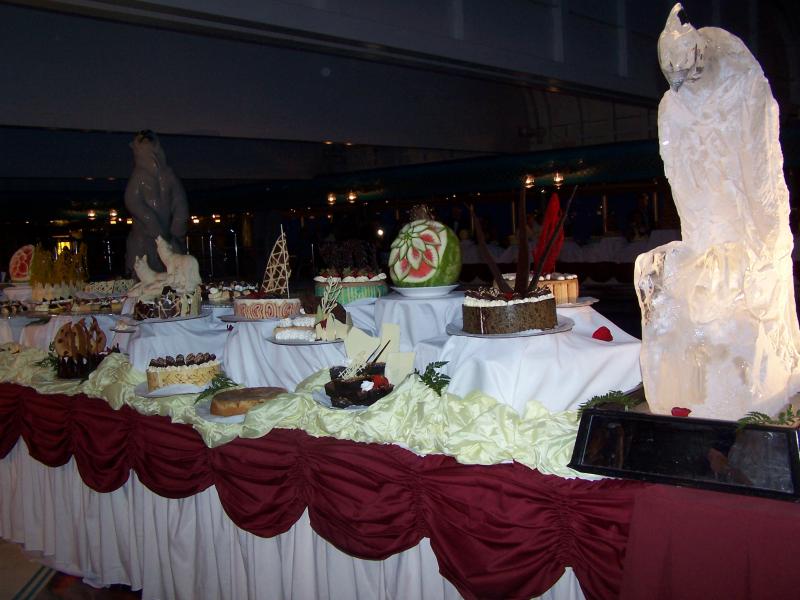 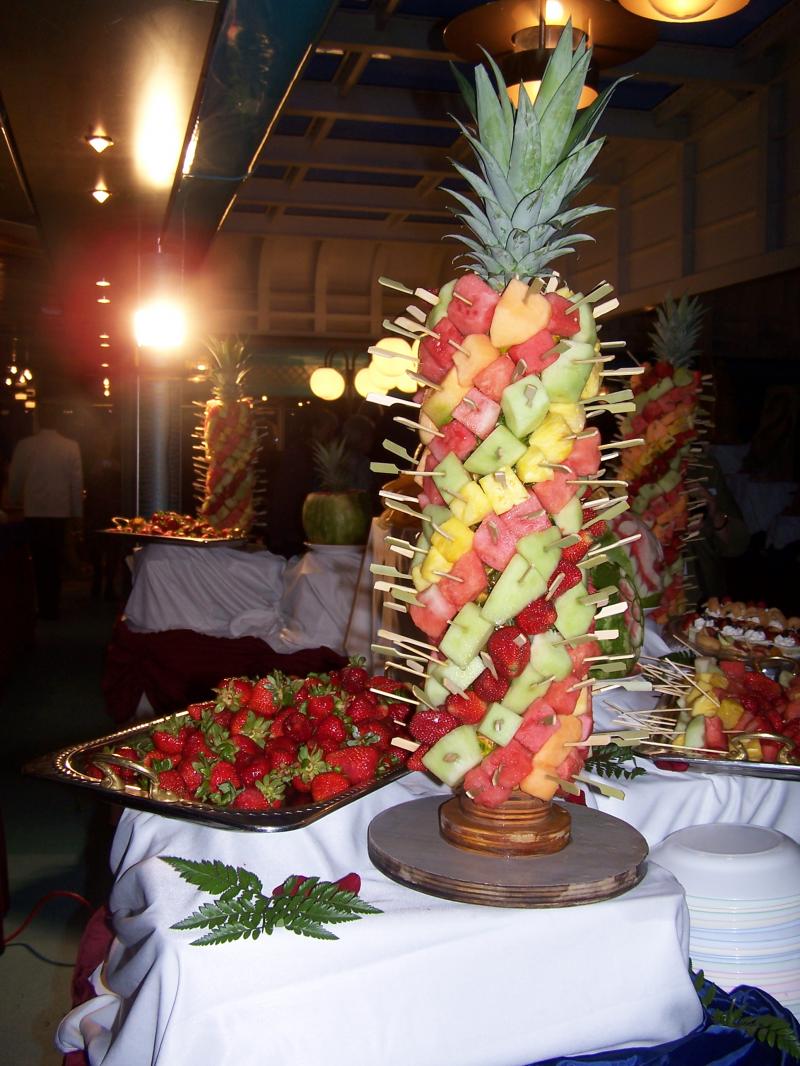 At 10:30 that night a dessert extravaganza was held at the midship swimming pool area on the Lido Deck 9. I don’t know about everyone else, but as much as I love desserts, that late at night I’m not really in the mood for indulging my sweet tooth.

The other memorable thing about cruising Glacier Bay is that it’s the only time I’ve ever been seasick on a cruise. When the cruise ships depart Glacier Bay, they’re on the open ocean for awhile during the cruise to Ketchikan, the next port of call. Or at least in an area where the big waves from the ocean are crashing through the various islands to find the cruise ship! When I was eating dinner in the Vista, which is close to sea level, I had a window table. One of my dining companions was seated beside the table and she was very chatty, so I had to keep looking at her. The waves were high that night and by the end of the meal I began to be queasy. Oh no….

Planning ahead, the next time I cruised Holland America Inside Passage to Alaska, on Glacier Bay day, instead of going to dinner, I took a green apple from the Lido Buffet and drank a can of ginger ale. Pathetic dinner when fine meals can be eaten on the ship – but I wasn’t taking any chances of a repeat performance!

Have you been to Glacier Bay? Were you lucky enough to enjoy the scenic cruising or did you get socked in with fog?