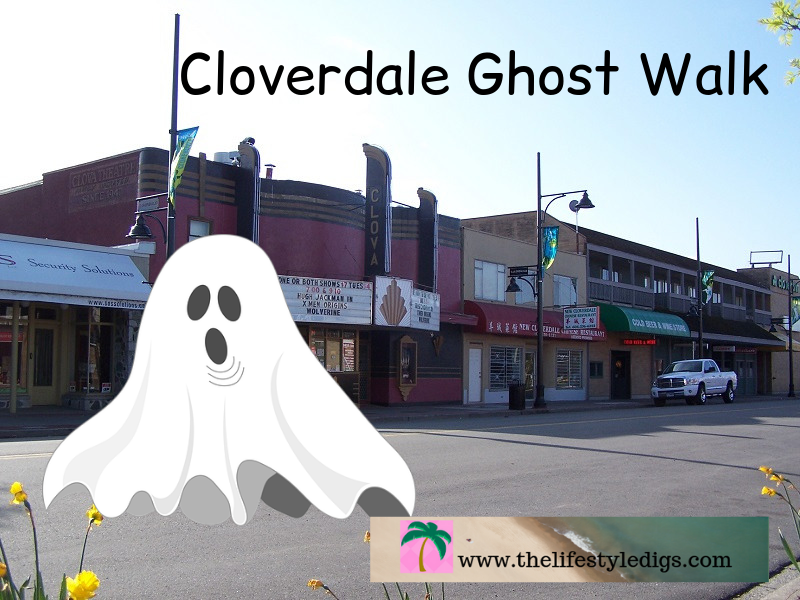 I’ve lived in Cloverdale, Surrey, British Columbia all my life, but there’s a lot of Cloverdale history I don’t know about.

That includes regular history and what I’ll call the dark side. The stuff people don’t want to talk about. Our parents and grandparents should have shared more things about growing up in Cloverdale.

Main street in Cloverdale is 176 Street. Venus Cleaners is about the only business still remaining from my childhood! We had a 5 and dime store, a movie theater, a department store called Duckworth’s, a bakery, a travel agency, and assorted small businesses that sold shoes, bikes, and flowers. There was a lawyer, a dentist, a doctor, and even a funeral home.

The buildings remain. Most of the businesses a distant memory.

I went on a ghost walk around Cloverdale one Friday night in July. There’s a shop in Cloverdale called Gypsy Moon where they do psychic readings and sell metaphysical supplies. Gypsy Moon has been in Cloverdale for years. I’ve seen many stores and restaurants open and close in short order in Cloverdale. You wouldn’t think a little store like this could make a full time living in this town, but it’s still going strong. 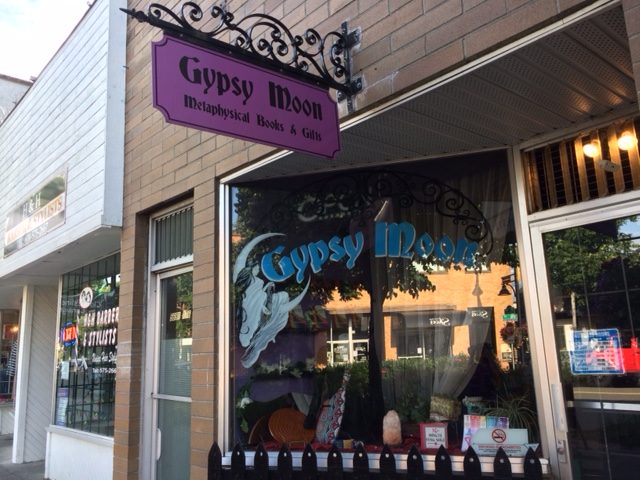 The cost for a ghost walk is $30 and they’re very popular. The walk is usually sold out when I inquire, but I finally managed to get on one! The lady doing the walk works for the Surrey Historical Society. Through the City of Surrey, she does regular history walks around town, but these ghost walks are more about some of the bad things in Cloverdale’s history. She told us about the history of some of the buildings and the people who lived in them.

So yes, I learned a few things.

The cost for the walk also included a psychic reading back at Gypsy Moon after the walk. If nothing else, this was good entertainment value and a fun night.

The ghost walk begins at 7pm on Friday night and is not strenuous. It’s about a one block walk up the street with several stops to talk about Cloverdale’s history, and then across the street and walk back a block. 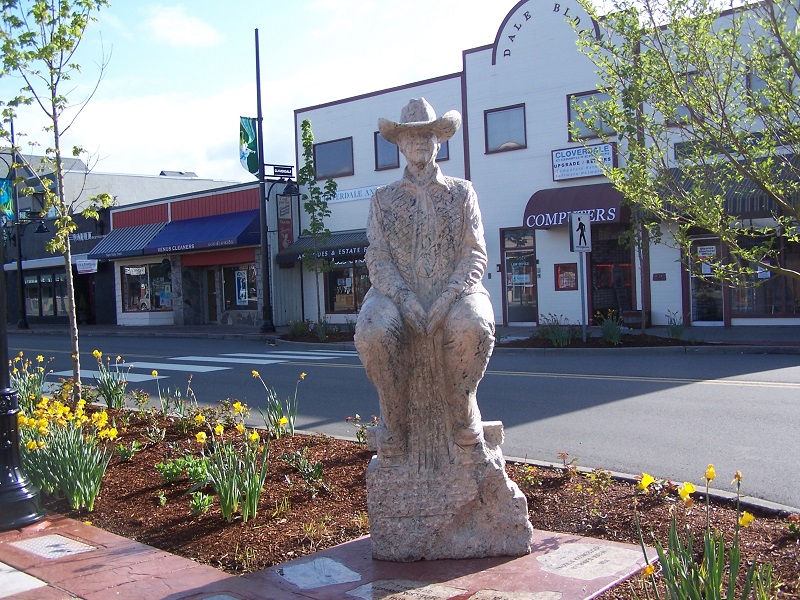 One of the stops is inside the 176 Salon, a hair cutting shop that’s on the site of the former Bowells & Sons funeral home, and apparently has a fair amount of paranormal activity taking place here. There was a group called Coldspotters along on the Cloverdale Ghost Walk with all their ghost busting equipment for paranormal investigations. They set up in the 176 Salon and answered our questions about what they use to detect activity and some of the other places they’ve visited.

Nothing out of the normal happened during our ghost walk. No lingering spirits showed up. Darn!

There’s this property just south of Cloverdale, in the area we call the flats, that’s all farm land. One section is called Mound Farm that was formed by a glacier eons ago and is elevated over the flood plain. Mound Farm sits on over 100 acres, and there are probably more than 1000 trees on the land. It’s owned by the City of Surrey and except for renters in the two houses, it’s not public access, though I think the city’s plan is to partly turn it into a park one day. Mound Farm has been owned privately since the late 1800s, and I’m not sure when Surrey got ownership.

Something I didn’t know about Mound Farm was a religious group that lived here in the 1920s or 30s and they took in orphans. I think they only took in boys – teenagers that were considered unadoptable because of various handicaps. It was called Home for the Friendless. That name is kind of creepy. The kids were set to working the fields and probably hard labor for their ages. Sometimes they escaped and ran into Cloverdale looking for help, but no help came. The historian says its really hard to find people who will talk about it, of those still around to remember. I even asked my second cousin when I phoned her the next night but she didn’t know about this place.

There’s a cemetery on Mound Farm with unmarked graves and the historians want to take a look at them, but the city hasn’t allowed access. Sometimes the residents who live in the houses on the farm wake up at night to find the TV is on and it’ll be on a children’s show like cartoons.

At the end of the ghost walk, we went back to Gypsy Moon and the psychic did a reading for each of us. We sat in a circle and heard each other’s readings. The psychic came up with some interesting things for some of the others. Things that made sense to them. And others more like me, who received a reading that didn’t mean a thing to us. The psychic said the spirit hovering over me is from my mother’s side of the family, possibly her grandmother, who is in the states trying to make her way to me. Then asked me if that seemed familiar. Well my great grandmother was long dead before I was born and she lived in Scotland and as far as I know never left the old country. If she said my father’s side of the family, that might have made more sense because some of his relatives lived in California. Anyway this spirit doesn’t want to be forgotten and the psychic suggests I take up genealogy after finding out I have never done that.

Like OK that was kind of disappointing. I’m not interested in genealogy. I’m not knocking it for people who’d like to know more about their ancestors and where they came from. Who knows? Maybe it’ll be something that interests me to follow up one day.

A little later the psychic took my tarot card and said to me “you’re healing”. Well, I’m thinking maybe, I don’t know. There could be a lot things I might be healing from, most recently weight loss over the last year. But then she said nobody knows about it, or maybe not many know about whatever I’m healing from. But no, that wouldn’t make sense because I do talk to others about what’s going on with me. It’s also obvious to people who know me I’m losing weight. If I haven’t brought it up, they’ve said to me – hey you’re losing weight. For me, the ghost walk was more entertaining than my reading.

After doing a little more research about mediums and our spirit friends, I’ve found out that my message can be from anyone, even people who I’ve never met, who died before I was born.

Getting back to my great-grandmother who I never met, when I was 19 I had a photo taken of myself at one of those old time studios. I dressed up as Annie Oakley. I guess I’ve had that wannabe cowgirl thing going my whole life! It was a birthday present for my mother. When I gave it to her, she pulled out a small wallet sized black and white photo of her grandmother and slipped it into the corner of the photo frame. She thought we looked alike. It’s been decades since I’ve seen either of those photos!

Have you ever done a ghost walk? What about a psychic reading? How did it go for you? 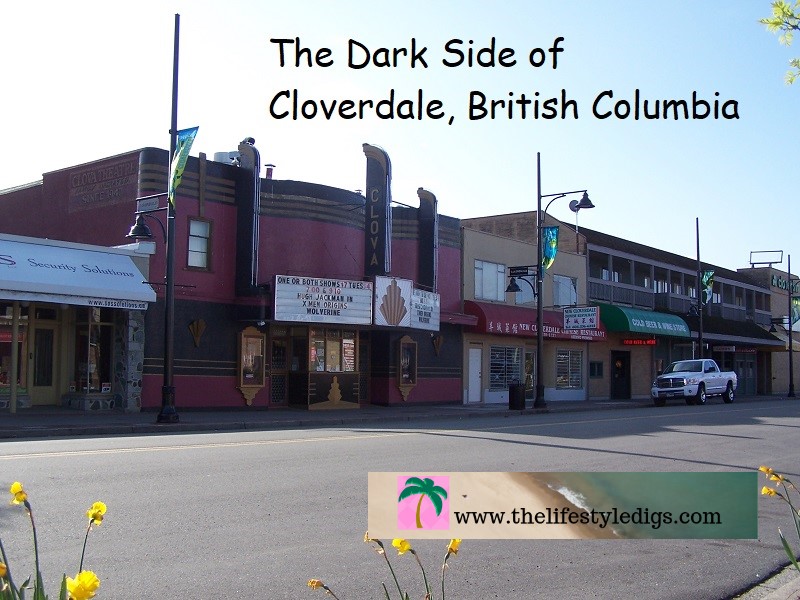