And, yes, I knew she was pregnant when I bought her!

Mares usually wait until the middle of the might when no one is around to watch them foal. This is what was waiting in the morning. 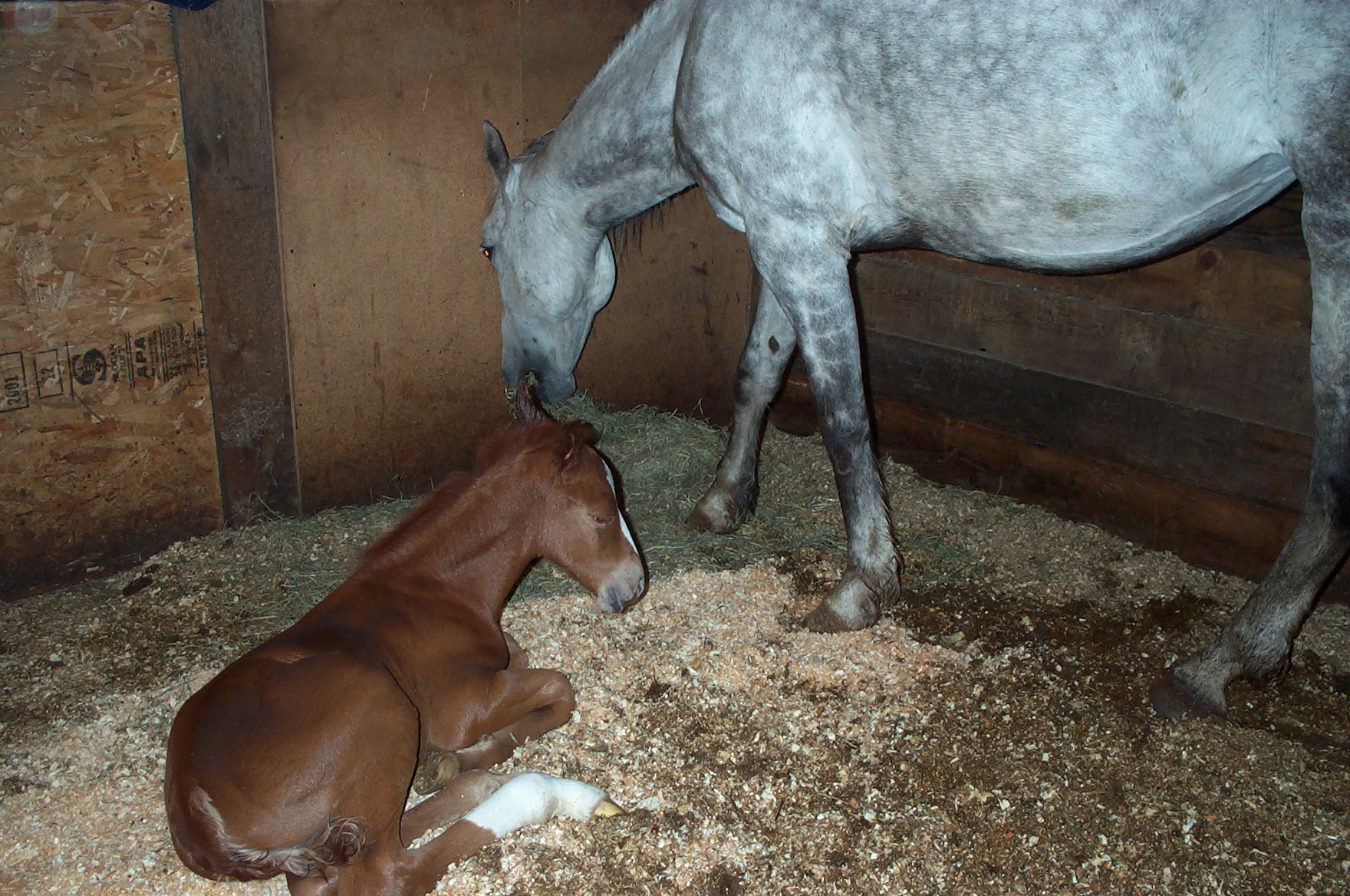 The deadbeat and I were together at the time and tried to come up with names for the newborn colt. I wanted to name him Ranger. The deadbeat liked Rick because he’d previously owned a horse named Rick.

I suggested Ranger Rick, but the deadbeat didn’t like it.

I got a pen and paper out and surfed the Internet looking for horse names and wrote down six names that I liked. The deadbeat liked two of the names on my list, and we ended up choosing Cajun. A red-hot spice name for a red-hot baby horse.

My little guy is a day old and finally has a name!

When Cajun was a month old he walked up behind me, bit me on the shoulder, and took off.

You can’t punish a baby, but biting is definitely not acceptable behavior. I got a halter on him, snapped on a lead shank, and gave him 5 minutes of hard labor halter training.

Unfortunately, to this day, Cajun still thinks it’s cute to be a little nipper. Usually when I’m saddling him. The teeth come at me when I’m tightening the cinch.

As Cajun got older he started looking for ways to get into trouble. One day I wasn’t feeling well and called in sick from work. I looked out my bedroom window and saw Cajun in the neighboring field that was leased by a greenhouse operation to grow tomatoes.

Yikes! How’d he manage to do that? (A question I’d be asking myself about Cajun’s antics many times over the years.)

The gap between the barbed wire gate and the solid fence post was probably wide enough to let a young foal, who was probably only a couple of months old at the time, squeeze through. 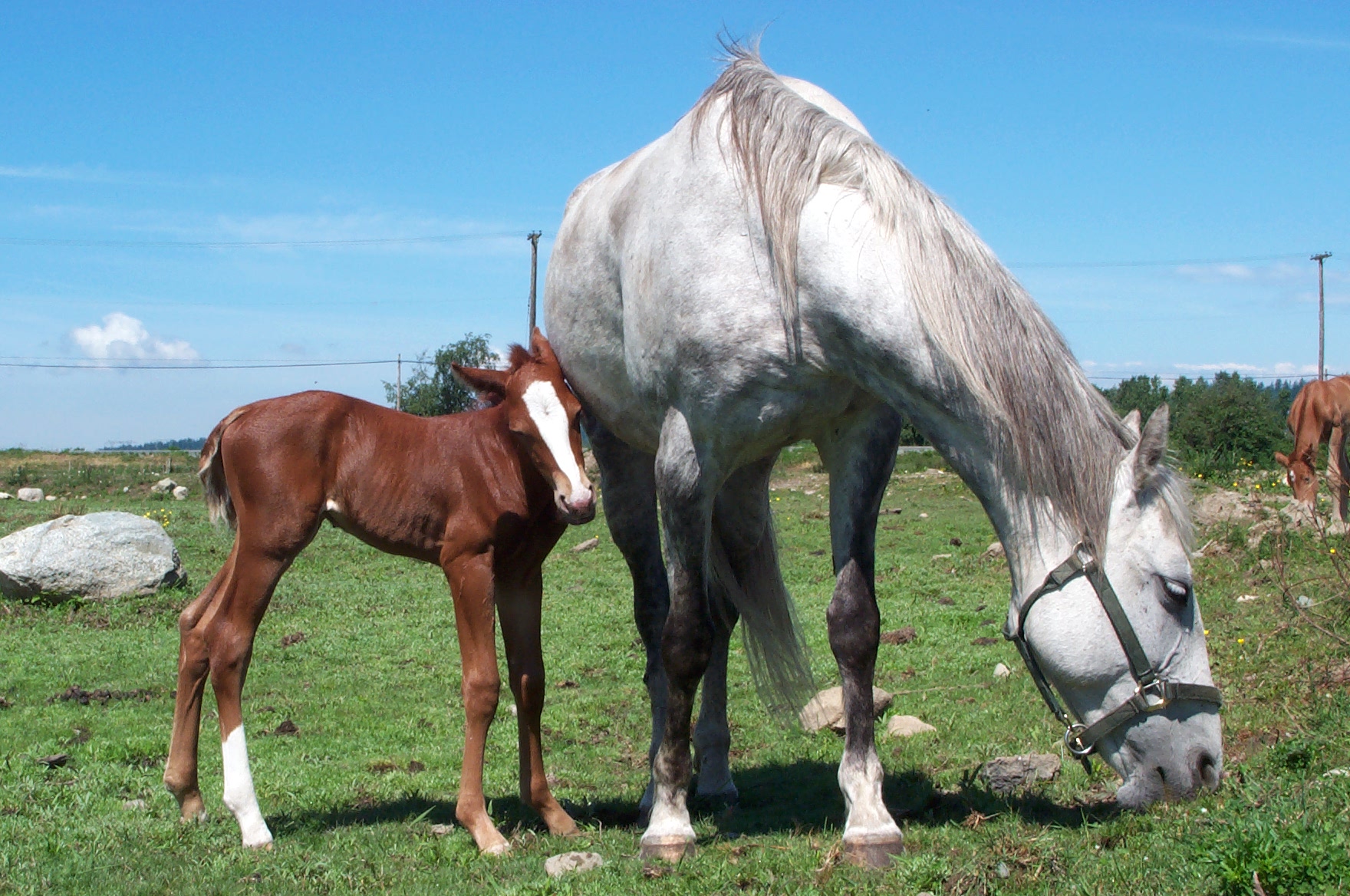 Cajun was standing near the gate and Velvet was standing on our side of the field. Neither of them appeared agitated by the separation, but I had to get that colt out of the unfenced neighboring field. I don’t want him getting on the road!

I ran outside and grabbed a halter and lead to put on Velvet. If I opened the gate and led her into the other field, Cajun should follow her back into our field.

The thing I need to mention about these barbed wire gates is that sometimes they are very hard to open and close. You need brute strength to push the loose post that’s part of the gate toward the stationary post in order to release the latch. In this case I think it was a wire loop.

After some struggling I got the barbed wire gate unlatched, and opened it wide enough for the mare and foal to pass through without getting tangled.

The problem is I had other horses to deal with. My two geldings, Whistler and Lucky, plus my boarder’s horses, another mare and foal, and another gelding were crowding around the gate. Once I opened the gate, the other horses tried to get into the other field. So I’m dealing with trying to get Cajun back into my pasture while keeping a half dozen other horses where they were. It took a couple of pass throughs with Velvet until Cajun finally figured out to follow her back into the pasture.

Now the hard part. I had to latch the barbed wire fence to the post. Remember I was sick and feeling very weak. I was able to get the bottom of the post into the loop but I didn’t have enough strength to push the post against the stationary pole to get the top loop over it. I’d taken the halter off Velvet by that time and wrapped the lead rope around the two poles to bring them together. The extra leverage finally did it and I got the top loop fastened over the pole.

Cajun liked to steal things and run off with them in his mouth as a big joke.

The deadbeat was putting in a cross fence and pounding stakes in the ground where he wanted fence posts to go. Cajun was getting good at pulling the stakes back out of the ground! He also managed to run off with the hammer when it was left unattended.

One night we came home and when we stopped in the driveway to unlock the gate, noticed some people with a flashlight, standing further down the road near the fence. The deadbeat called out to see what they were doing. Looking for a cell phone, was the answer. Apparently they’d stopped earlier to feed the horses.

Yeah, thanks for asking for permission to do that. People just think it’s OK to walk up to a field with horses in it and feed them. What are they feeding the horses anyway? Apples? Carrots? Chocolate bars? Poison?

These people would probably kick up a big stink if they’re walking down the street and I just handed their kids some candy to eat without asking the parents for permission first.

The man said he’d tried calling his cell phone and it went straight to voice mail. He remembered putting it down on the fence post when he was feeding the horses, but it wasn’t there now, so they were checking along the ground.

I bet I know exactly what happened to that cell phone. Cajun spotted it on the fence post, picked it up in his teeth and walked off with it. Eventually he’d have gotten bored with carrying it around and dropped it. And then he would have stepped on it and broken it on his way past.

That would explain why the phone doesn’t work any more, won’t ring, and goes straight to voice mail. Mystery solved!

Yeah karma’s a bitch. Next time ask the owners first if you can feed their horses.

Cajun was pretty easy to break in as a riding horse. My Appaloosa, Whistler, was a great pony horse. I’d put a halter and lead on Cajun, saddle Whistler, and then ride Whistler around the pastures leading Cajun.

When he was two years old, I put a saddle on Cajun while ponying him around the property. I’d stop Whistler, lean onto Cajun’s saddle, putting some weight on it, and swinging a leg over.

Finally the day came when I decided to get on Cajun’s back.

While riding Whistler and leading Cajun, I brought them both to a stop, leaned out of Whistler’s saddle, and eased onto Cajun’s back.

No fuss, no muss.

Cajun had seen me riding Whistler many times. He was used to seeing me on a horse’s back, so he probably thought it was quite natural for me to get on his back, too.

There were trails just down the street from where we were living and I rode Cajun down there many times. He usually did pretty good, but every now and then he’d play stupid. Like he’s forgotten everything he’s ever learned.

One time I was riding Cajun in an equestrian park and behind us I heard the sound of thundering hooves. Who would be riding their horse like that on the trails when you don’t know what’s around the bend?

Cajun started prancing and I got a good grip on his reins and held him back. He continued running at a standstill. Yes, very talented. He’d do well in a dressage arena. Ha ha!

Around the bend gallops a riderless horse. There’s no way I could have caught that horse as it passed us. Cajun was too busy having a freak out. I urged Cajun after the loose horse hoping to catch it before it reached the road, but Cajun was just out for a nice lope. The runaway horse outdistanced us fast.

I rode back down the trail looking for the rider, wondering if they were injured. A woman walks into sight. Yes, that was her horse. She didn’t seem at all concerned. Just figured her horse was heading home. Turned down a bystander with a nearby car who offered her a lift to find her horse.

Man! If it was my horse I’d be freaking out!

Cajun has a few tricks he can do. Amazing! He’s self taught!

One of this tricks I like to call “bombs away”.

Cajun picks up his feed tub and carries it around in his mouth. He will either walk over to a dog or wait till a dog comes to him. And then it’s bombs away!

Yeah, really cute watching him walk off with his lead rope in his mouth.

I can’t believe it’s been 16 years since my little guy hit the ground running. 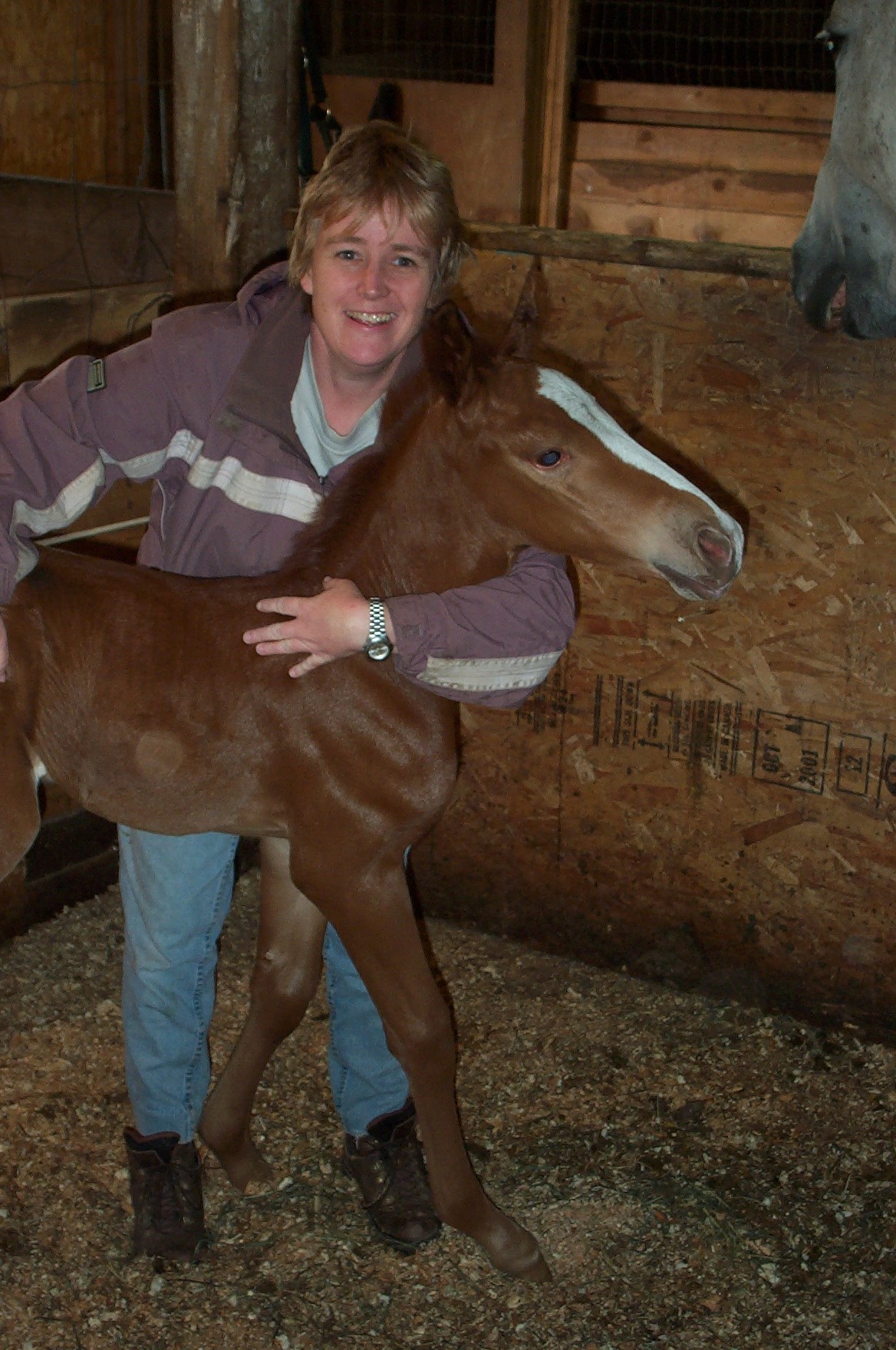 This photo is also significant because four years ago I looked at it and realized I still have pretty much the same haircut. I’ve kept my hair short for close to twenty years because it’s easier to manage. That changed on the next visit to my hairdresser when I asked: “how do you think I’d look in a bob?” 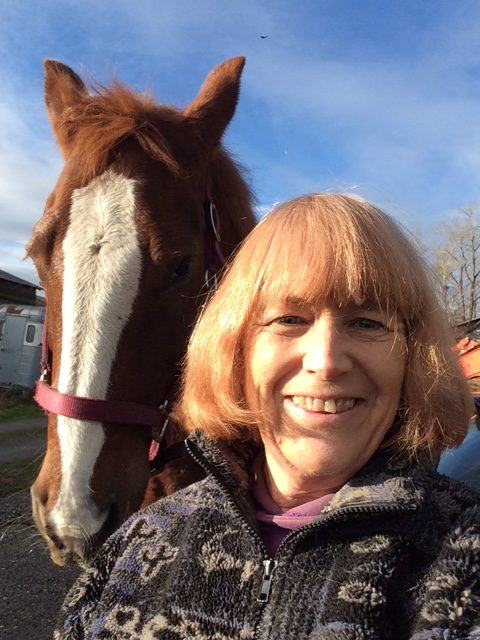 16 years later Cajun and I still have red hair!

Cajun is Sweet 16! I can still hardly believe it.

Check out the video for my tribute to Cajun through the years. It is set to music, so either turn on or off your speakers – depends if you like Ringo!

Is it silly to hold a birthday party for your horse?

I don’t know, but it’s not going to be much of a party for Cajun’s Sweet 16. The party goers will be me and a dog. Cajun will get a bunch of carrots and a Stud Muffin. Maybe two, seeing as how it’s his special day… 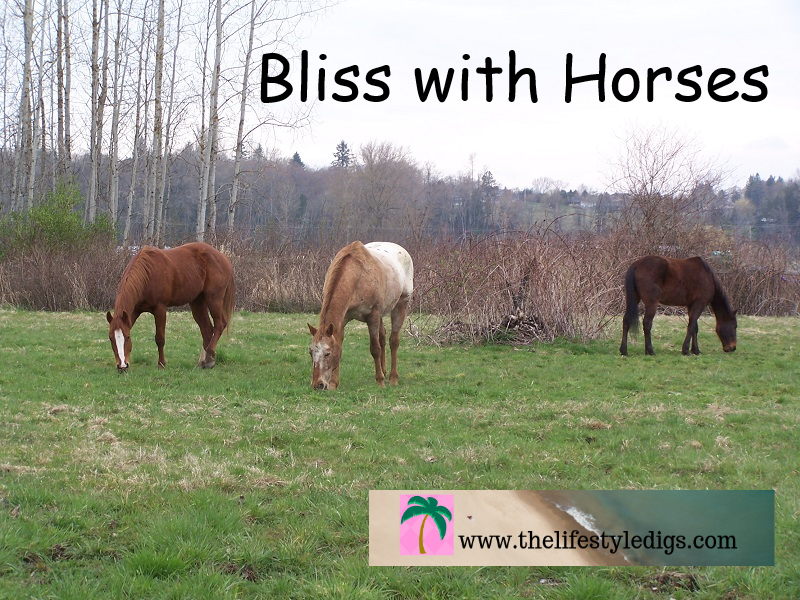 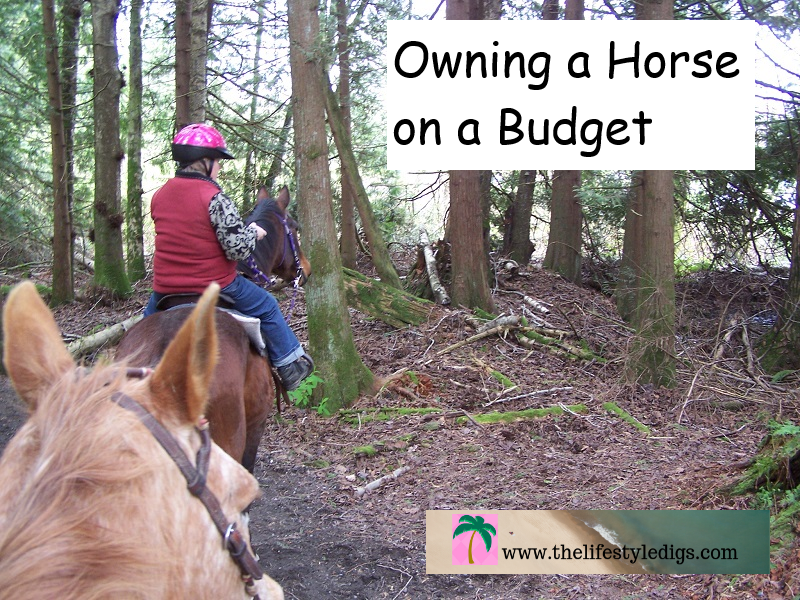 And a video in my pandemic series: