Destination Oregon is becoming a reality. My goal is to spend the first night on the road in scenic Seaside, Oregon, about a six hour drive from my house. 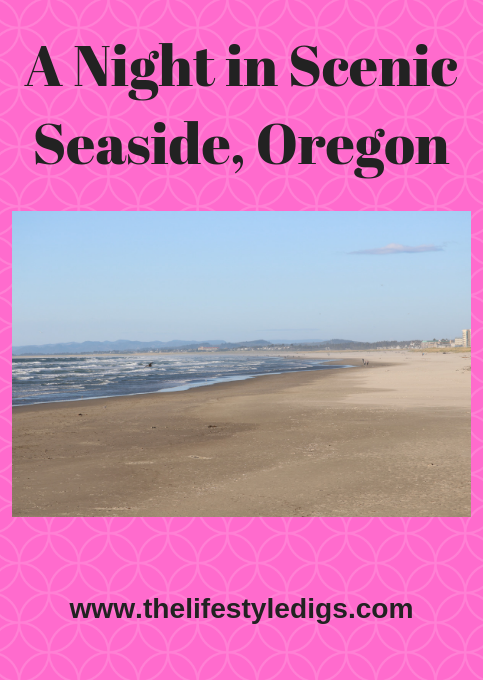 However, you know from reading the first leg of my journey that an hour after I crossed the border into Washington, I’m still only 30 miles away in Bellingham due to a couple of stops.

It’s just after 10am and I need to put some miles between me and Canada.

I figured with a couple of rest stops and filling up with gas that I should be arriving in Seaside around 4pm.

Arriving at Motel 6 in Scenic Seaside

The drive went a little slower than planned, but not too bad, and I rolled into the Motel 6 in Seaside just after 4:30. If you’re asking why that motel, the number one answer is – – – ta da – dogs! Motel 6 allows two dogs and no extra charges. I know I’m not the only one out there that travels with my pet. What’s with the trend in the past ten years where every hotel charges an extra $10+ per night per dog? The money I’m saving by staying at Motel 6 I put back into the local economy by eating out or shopping.

Motel 6s are very similar. They can usually be found near a highway exit, there’s almost always a Denny’s nearby, and you can expect a nice, clean budget room.

The Motel 6 in Seaside is located right on Highway 101 in the southern end of town, about a ten minute walk from the ocean. It looks like it might have been a hotel at one time. At Motel 6 usually you park in front of your room, unless you’re on the second floor, and walk right in. This time we parked in the lot, entered the building, and the rooms were accessed by walking down a hallway just like in a hotel. The room was nice with a mini fridge and microwave oven, and the first thing I did was close the curtains. Not sure if this area attracts Peeping Toms or thieves looking for unattended valuables.

Then I started bringing my stuff in from the car.

If anyone’s every traveled solo with dogs you know it takes trip after trip after trip to get all the dog gear into the room and then your own stuff too. That’s why parking in front of your room and walking in is so handy. In this case I had to hoof it a little further.

I was moving as fast as I can because the fish and chips place I’d researched online, Buoy’s Best Restaurant, closes at 5:30pm. Seemed a little weird to me to close right about when hungry people are thinking about eating dinner, but this place is only open from 11:30am to 5:30. Must be nice to be so busy you can call it a day after six hours. 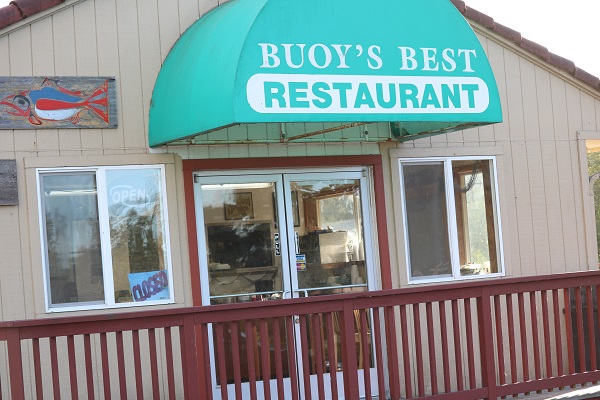 I arrived at 5:05 and a woman was sweeping the sundeck.

“Am I too late?” I asked. For all I know they’ve changed their hours and cut back even more.

“We’ve closed the grill,” she answered. “If you want a basket to go, we can still serve you.”

Perfect, because I wanted fish and chips anyway and to eat outside at the picnic table so my dogs can join me.

I asked about the crab cocktail and that was available too. The grill must be for the sandwiches – they offer various seafood and cheese melts. I’ve been kind of off sandwiches lately so I wouldn’t have been ordering one anyway.

I ordered the three piece salmon and chips, paid for it all and took a Dr. Pepper and my crab cocktail outside, The lady said she’d bring my fish and chips out when it was ready, which it was in a fairly quick time. The fries are waffle cut, and the basket also came with a small cup of coleslaw. 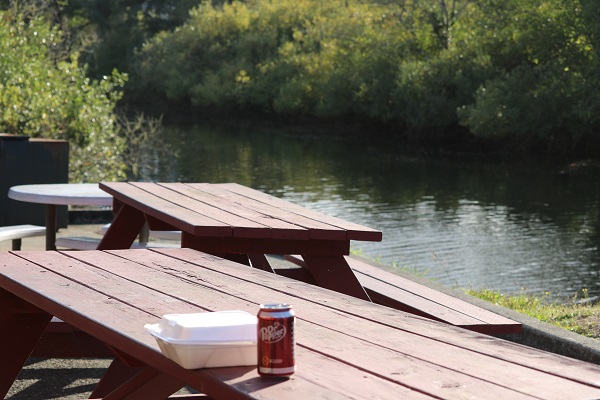 Now the fun thing was the wind had picked up, which sent my napkin skittering across the yard. I love the wind. It wasn’t cold outside, it was nice other than trying to keep my meal together. A pretty view of a creek that runs behind the restaurant.

Was it worth it? The crab cocktail was good and the sauce was the right amount of tang. I’m not sure if $7 for a small Styrofoam cup was good value. I do think it’s probably the going market price otherwise they wouldn’t continue to keep it on the menu. The waffle cut fries were different than what I’m used to, but nice. I had three pieces of fried salmon and I’d say it was average. There are many fish and chips places at the beach near where I live, and I’d say I’ve had better. I’d definitely recommend stopping in for fish and chips if you’re passing through Seaside in the afternoon.

Right at 5:30 on the dot the woman who’d served me and the man who ran the kitchen locked up and beat me out of the parking lot. This is not the type of establishment that’ll still serve you if you show up a few minutes before they close!

A Walk on the Beach in Scenic Seaside, Oregon

After I ate I drove down to the beach and parked nearly on the sand. I bet I wouldn’t have been able to do that a few weeks earlier!

Here’s the place where sand dunes begin and the waves from the Pacific Ocean crash on the beach. The wind is whipping the dune grass and the waves are curling into whitecaps.

I see a sign warning of a shark sighting. No problem for me. I wasn’t planning to go into the ocean! It was a beautiful evening and the dogs and I enjoyed a chance to stretch our legs after being inside the car most of the day.

We have beaches near where I live and I take the dogs for walks there every now and then, but we don’t get the big waves crashing on the shore. Generally speaking, good old Vancouver Island takes the brunt of anything the Pacific Ocean throws our way before it hits the mainland. I could have spent hours walking on this beach.

Watch my minute long video of some photos I took in Seaside.