Home Living A Bear in the Campground 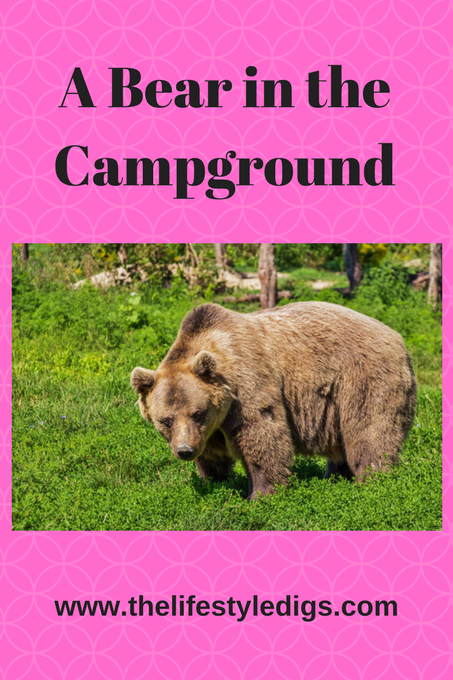 Does anyone out there like camping? Has anyone dealt with a bear in the campground?

I’ve had a couple of experiences with a bear in the campground, but only one that I recall like it happened last month. Keep reading for my beary scary stories.

When I was young my family went on a camping trip through British Columbia’s coastal mountains, which isn’t really a big deal seeing as how that mountain range starts no more than a half hour drive or so from where we live. Specifically, we were in Manning Park, and for reference, it’s about a 2-hour drive from Vancouver. I was about 5 years old at the time and we owned a station wagon.

Yeah! Who remembers station wagons? They gave way to today’s family vehicle of choice, the 7-seater mini-van. We had a camper type unit that was attached to the station wagon’s roof. If I recall correctly it was a wooden box, with hinges that made it pop up, and when the car was in motion, the box was capsized down to make it not be a big wind trap while driving. When it was popped up, it was about the height of a canopy that you see on the back of pick up trucks.

The camper box held our sleeping bags and probably our luggage too. We climbed in and out of it through a doorway that was accessed from the back of the station wagon. I sure wish I had a picture of it, but that was back in the days when cameras had film and there were only 12 or 24 photo possibilities. Apparently, my parents didn’t want to waste precious film on the camper and station wagon.

The bear had been busy overnight in the campground. Garbage cans were knocked over and coolers raided at every site. I think the bear had taken the bacon in our cooler.

My idea of camping is in a luxury hotel on the beach of a tropical resort, therefore a driving trip in a partly camperized van across British Columbia and Alberta was not quite what I had in mind back in the mid-90s when my ex – now known as the deadbeat – set off on a driving/camping trip. The van didn’t have a fridge but we had a cooler that worked by plugging it into the cigarette lighter. It had a noisy fan and I didn’t want to be kept awake in the evenings, so we put the cooler outside with the cord still plugged in, rolled the window up tight against the thin cord, and the fan didn’t bother me. We were unable to put the cooler outside of the van while at a campground in Banff National Park in the Rocky Mountains. This was due to bears, and the campgrounds had posted bear warnings and gave us a pamphlet on how to avoid attracting bears to our campsite.

With vague memories of a bear my father was standing on 30 years earlier, there was no way I was going to do anything to invite a bear into our campsite.

On our way home we stopped for the night at a campground in Canmore, Alberta. The deadbeat put the cooler outside, with me questioning if there was a bear problem. The deadbeat used to live in the area and assured me that bears didn’t come down this far. I checked the bulletin board and there was no mention of any bear sightings in the area, so I decided the cooler was fine sitting outside the van where the fan wouldn’t disturb my sleep.

We had all the curtains closed and were reading around nine-thirty in the evening when I heard a noise outside. We listened and it sounded like someone was pushing our cooler across the ground. Who would be trying to steal it? I peaked behind a curtain and there was a black bear trying to take the cooler! The deadbeat jumped into the front seat and tried to go out the door.  What was he thinking? Luckily the automatic door lock was engaged and he couldn’t open the door, so instead he honked the horn. The noise frightened off the bear and we both exited the van with flashlights trying to determine where the bear had gone.

The path the bear chose was through the next campsite where a couple was sitting by the campfire in front of their tent. The bear had run right past them, and all I could see were the two of them throwing water onto the fire, and then they jumped into their car and drove off. I never did see them again. Did they go to a local hotel for the night or did they abandon their equipment and just kept on driving?

A man at the campsite across from us came over – with his loose German Shepherd. Come on, man, put your dog on a leash!

While we were standing there a man in car drove up and stopped to tell us he’d just seen a bear and had called the police. I suppose he wanted to tell us to get back inside, and we told him the bear had just run through the area. This man had seen the bear by the check in booth, next to pay telephone, where it was standing on its hind legs.

The image of a bear standing there as if he was going to make a phone call was quite comical!

Eventually a police car drove up, stopping at all the campsites to alert the residents to a bear sighting and we told the officer we’d seen it.

Although bears don’t generally freak me out, as far as I’m concerned that’s just another good reason why my idea of camping is a nice hotel on a tropical beach.

And that’s my beary scary tale!