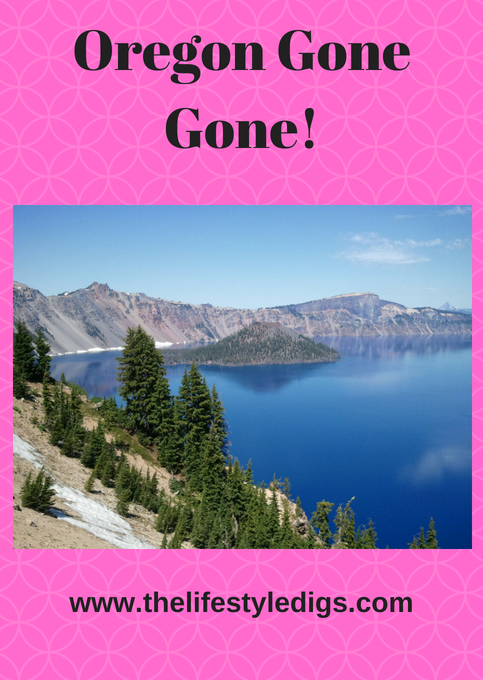 In my June 2018 goals I talk about putting a little money aside each month for my vacation fund, and even let you in that this year I’ll be driving down to Oregon.

Countdown to September for several reasons. School is back in and the highways and tourist attractions will be less crowded. It marks one year that I’ve been working my current job and it’ll be time for two weeks vacation. Also, I’m unsure if I’ll have a job after September. And no, it’s not that I’ve been a bad employee or I want to leave the company. I was hired on a one year contract, and I’m  hoping it’ll be extended, but if it isn’t, I’ll mark the beginning of my unemployment with an Oregon getaway.

I’ve mentioned it before. I’ve been to or through Oregon countless times. Mostly Oregon is that state I drive through going back and forth to California but I’ve done a few weekend getaways there over the years.

It’s pretty easy to get to Oregon.

I get myself a couple of blocks over to Highway 15 and drive 7 or 8 miles to the US/Canada border at Blaine, Washington. There the highway becomes I-5. Stay on it long enough and I’ll eventually get to another border at Tijuana, Mexico!

I’ll stay on I-5 until south of Seattle where I’ll head west over to Highway 101.

And that’s another highway if you stay on it long enough will take you all the way to Southern California!

My reason for taking Highway 101 is so I can cross the Astoria Bridge into Oregon, about 4 miles over the Columbia River that effectively separates Oregon and Washington. It even has a guest appearance in my novel, Ringer. I’ve spent the night in Astoria in the past, cute little riverfront town. Not sure I’ll do that this trip, it’ll all depend on how my driving is going for the day, but generally I’m planning to spend the night on one of the towns overlooking the Pacific Ocean. I might not even drive down the coast too fast. Years ago I stayed at the Ester Lee Motel in Lincoln City and I know they’re dog friendly. It might just be another overnight stay and a walk on the beach with my pooches.

I’m kind of a fly by the seat of my pants type of person, so I have no general plans. Just meander down the coast, taking my time because I’ll be driving by myself and not dealing with a schedule. Will I stop at Sea Lion Caves? Who knows? I’ve been there in 1975 and 1992. Maybe I’m overdue for a visit. Woowee I don’t miss the stench of that place!

All those times I’ve driven down the coast and seen the sign for dune buggy tours and rentals – well… this might be the year!

I plan to go as far south as Crescent City, California, a town I haven’t been to in years. The Trees of Mystery now has a gondola ride that dogs can go on. Yippee! That’ll be my dogs second gondola ride. They’ve done Hell’s Gate before. I plan to spend the night in Crescent City, and then head inland to see Crater Lake, Oregon. All those countless times I’ve driven through Oregon and seen the exit sign for Crater Lake and never stopped? Well this trip will be different! Crater Lake, here we come!

From Crater Lake I’ll head inland a bit more and go to Bend, high desert country. Probably stay there a couple of nights and do a day trip to the Painted Hills.

Then it’s back to Portland for a night or two. I’m going to do the iFly. I’ll be flying, baby!

Yup, life is all about experiences. Need to do it now or regret it when I no longer can.