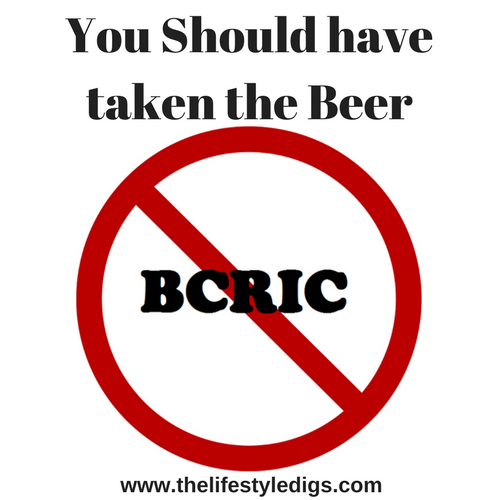 Back in 1979 the province of British Columbia issued to all residents 5 shares in the British Columbia Resources Investment Corporation. This was a company formed by various holdings owned by the province in the mining and logging industries. The plan was for every resident to have 5 free shares as an investment in the province. The shares were originally valued at $1 each, and the 5 shares were worth $5. Additional shares were available for purchase on the stock market. It was called BCRIC, pronounced “brick”.

This was announced by the So-Cred government led by Bill Bennett and the most notable thing I remember from this time were car bumper stickers that read: “Bennett is a silly BRIC”. 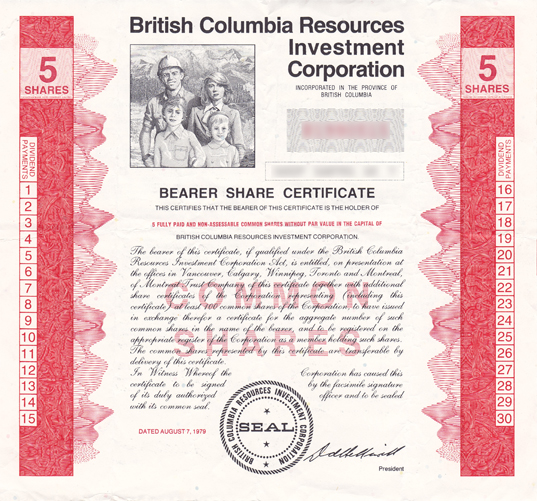 The corporation eventually went bust and residents were left holding a worthless piece of paper. I remember receiving my shares but I don’t know what happened to them. I thought I might have stuffed the piece of paper into my filing cabinet, but a recent purging of my filing cabinet (with some items going back decades!) didn’t uncover them.

A few years ago I was going through my father’s safety deposit box and noticed he had some stock certificates in my mother’s name. She passed in 2005, and I have an article about her battle with Alzheimer’s Disease. I knew for sure one of the stocks was worthless. Donna Mines. A friend of my parents was involved in Donna Mines, but I was young at the the time and don’t recall if he was a partner, an owner, or purchased a lot of shares, and recommended this investment to everyone he knew. I was surprised to see the certificate in the safety deposit box because Donna Mines shut down in the 1970s and investors lost their money. Why was he hanging on to this worthless piece of paper? There were two other stock certificates in there, also in my mother’s name, and I’d never heard of the companies.

I took photos of the other stock certificates, and when I got home I phoned the BC Securities Commission to ask about them.

Before I could mention the names on the certificates, the lady on the other end of the phone asked me: “It’s not BCRIC, is it?”

“No,” I said. “I thought those were worthless.”

“They are,” she answered, “But lately I’ve been getting lots of phone calls because family members are finding them in filing cabinets or safety deposit boxes and calling to see if they’re worth anything.”

I told her a story about when I was attending the University of Victoria, the same time the BCRIC shares were issued. Our Student Union Building was collecting the BCRIC stock certificates. In exchange, the SUB was offering to swap students their stock certificate for a jug of beer.

She laughed, and said: “You should have taken the beer!”