Skip to content
Cheryl at The Lifestyle DigsAugust 17, 2017 Pets 5 Comments 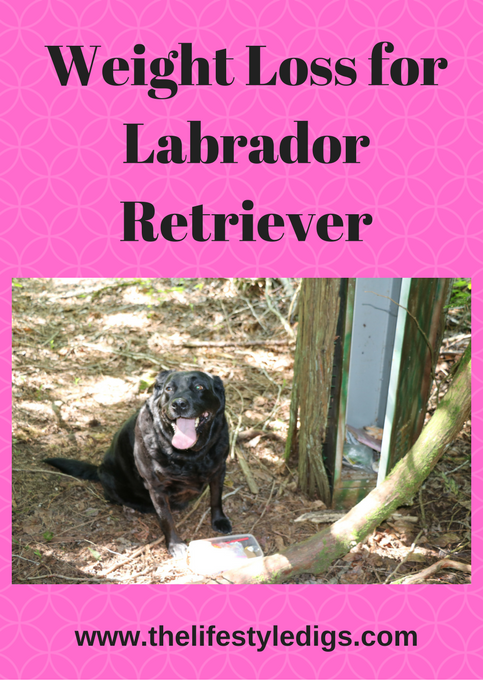 In October, 2012 I heard about a 6 year old black Lab who needed a new home. I said I could take her and if she didn’t work out for me, I volunteer with Dogwood Dog Rescue and I could place her through them. Enter Chica. One chubby black Lab. She needed to go on a diet and exercise program, and I now had to figure out weight loss for a Labrador Retriever.

Chica had spent the last 3 years living with a senior woman, and a high functioning autistic man in his 50s, who was her foster son when he was a child. I’m unaware of how continuously he lived there through the years. The woman had Alzheimer’s Disease and eventually moved to a full care facility. The man was moving in with his brother’s family and they were unable to take the dog.

The brother had spread the word they were looking to place Chica, and Gordie, who owns the farm where I keep my horses, found out about the dog. Apparently he played pool at the same place with the brother.

The first thing I found out about Chica was she’d never been on a leash. They never walked her. If she had to go to the bathroom she went in the back yard. The next thing I found out was she wasn’t up to date on her shots. She’d last had shots (maybe) when she was spayed 3 years earlier. The most noticeable thing about Chica was she was quite overweight, even though the man said she’d lost about 30 pounds recently. I’m not so sure about that.

When I took her to the vet, she stepped up on the scale. 94 pounds.

I bought her Hill’s Science Diet Light dog food, and following the instructions according to her weight, I fed her 4 cups a day, split between two meals, breakfast and dinner.

Disclosure: If you click the photo and affiliate link below, and make a purchase, I’ll receive a small commission for the referral. Multiple daily walks followed. I’m not the type of person to let my dogs go out in the yard to do their business. I walk them several times a day, at least around the block, and often longer distances. Chica quickly figured out what walkies meant. Her chubby little rump would fly down the stairs to the front door as fast as she could, and she was so excited to walk that she’d jump up and down. Or try to. She was still too heavy to get much lift off.

I have a wooden stepping block that an old dog of mine used to get up and down off the bed once her arthritis in her spine made it difficult for her to jump. I set that up by the bed so Chica could get up for snuggle time.

After about 2 weeks she’d lost a couple of pounds and the daily walks had built up her muscle tone. She was now able to jump on and off the bed and get more lift off when jumping by the door in anticipation of walkies.

Over the next year Chica’s weight dropped to about 75 pounds.

I kept her on the light dog food and from time to time substituted a bag of weight management dog food.

By the time Chica was 9 or 10, it was obvious the weight was packing back on again. I wasn’t doing anything different. She gets occasional treats, usually a biscuit at bedtime, but I don’t feed her a bunch of junk. I know she’s a sneak eater. If the other dog hasn’t finished her food, I believe Chica sneaks in for it. When I’m out at the farm Chica is gobbling the horse’s food. I’ve had to take to tying her when the horses are eating, but when she’s loose I’m not keeping an eye on her all the time and don’t see any what she’s scrounging.

In 2016 I decided to cut her food back to 3 cups a day, split morning and night to see if some of her weight would come off.

In October 2016 I took the dogs in for their annual shots, and Chica’s weight was back at 90 pounds. I also noticed she’d been limping. The vet who saw us wasn’t my usual vet and he said the limping might be caused or exasperated by the weight gain. I told him I’d cut back her dry food and had just started her on small amounts of canned dog food to mix in Recovery.

If you’re not familiar with Recovery for dogs, I used it on a Dalmatian who’d passed away a few years earlier. That was the dog who originally used that stepping block to get on the bed. It helps dogs with joint pain.

I asked the vet what else I could be doing to help Chica lose weight and he suggested cutting back the dry dog food and putting her on a high fiber diet.

Since then I’ve cut Chica back to one cup of dry dog food daily, split between morning and night. I usually give her oatmeal for each meal. I mix half a cup of oatmeal with water and cook in the microwave. I usually thaw mixed vegetables and add a dollop of applesauce and we call it a dog’s breakfast! I use other vegetables from time to time such as green beans. I might give Chica some cooked beans, such as navy or black eyed peas, whatever I’ve made for myself. Sometimes I substituted brown rice for the oatmeal. If I’m making pumpkin muffins, I’ll freeze the leftover pumpkin filling in ice cube trays and give one to Chica with her meals. Thawed of course but I think she’d eat it frozen too! 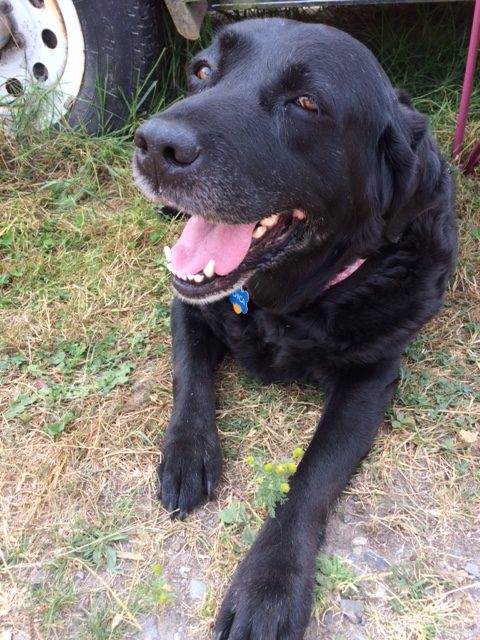 Within a couple of months Chica had taken off about 5 pounds and the limp had pretty much gone.

It’s been nearly a year and Chica has no sign of a limp and sometime she runs around like a puppy so that Recovery is doing its job. She’s lost a few more pounds. She enjoys her walkies. She likes playing in the creek.

Do you have any tips for helping a Labrador Retriever, or any other breed of dog, take off a few pounds?