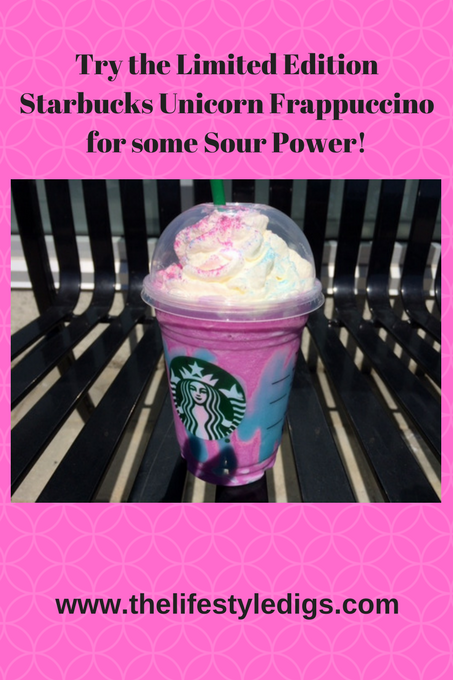 Yes, I have jumped on the bandwagon! I have tried the limited edition Starbucks Unicorn Frappuccino. Sour Power!

All you hear all over social media the past few days is the Unicorn Frappuccino at Starbucks with the magical fairy dust that makes it change color and taste.

Starbucks baristas aren’t too impressed with it, some having meltdowns on social media. They’re stressed because customers are flocking in to buy and they’re extremely busy. Did Starbucks not plan ahead for extra staff for the 5 days the Unicorn Frappuccino would be available? Swamped with orders and getting sticky hands from the fairy dust are common complaints, according to this article, and many others online, that Starbucks baristas hate the Unicorn Frappuccino.

Then there are nutritionists and health food stars coming out to say the Starbucks Unicorn Frappuccino is high in sugar and calories. Everyone says that when Starbucks brings out its seasonal drinks in the fall – pumpkin spice latte or peppermint mocha. Drinking something like this every once in a while is all right. Indulge yourself on occasion. 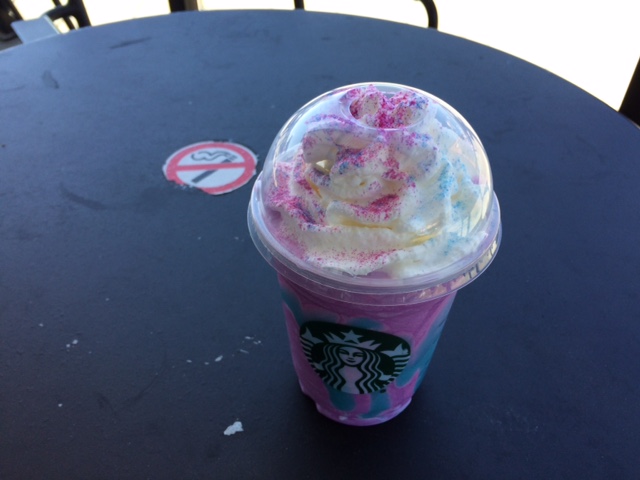 As for the Starbucks Unicorn Frappuccino I had today, I went in and there was only one woman in line, who was not ordering a Unicorn and still couldn’t make up her mind.

It might have helped that I decided to wait a couple of days before checking out what the Internet is buzzing about, and the lines had settled down. Or perhaps it’s because I went in shortly after lunch hour and missed the rush.

The Unicorn Frappuccino is a colorful drink in all my favorite colors: pink, purple, and turquoise blue. The whipped cream is sprinkled with the fairy dust or maybe it’s called unicorn dust. At first the drink starts off sweet. I took a couple of sips, before sticking it into my car’s drink holder for the few minutes drive home. When I arrived home, the Unicorn Frappuccino was still fairly sweet and I stirred it to see if it would change color. It wasn’t a noticeable color change. I did read on other blog that someone had let it sit for about 20 minutes and the color started to change on its own without stirring. I dipped my straw into the whipped cream to try the powder dust and that was definitely sour.

I love sour things! I always get sour patch kids at the movies, though I don’t usually buy them elsewhere. I buy sour jujubes for home. I used to eat rhubarb straight out of the garden when I was a kid. So sour is good. And by now the sweet tasting Unicorn Frappuccino was changing over to becoming a tart Unicorn Frappuccino, so I enjoyed that.

Overall I didn’t think it was all that great a drink, not all that tasty. I might as well have juiced some sour patch kids and sour jujubes and added whipped cream. Would I try another Unicorn Frappuccino if Starbucks brings them back in a year? Probably.

I wouldn’t want to have one every week, not even every month. I’ll never be part of the afficionados that can’t get enough and are making multiple trips to Starbucks to buy a Unicorn Frappuccino before they’re gone.

They’re an elusive beast. The Unicorn Frappuccino is all the buzz right now and Starbucks has them available for 5 days, ending on April 23, 2017.

Get this fabled mythical Starbucks Unicorn Frappuccino while you can.

Have you tried a Starbucks Unicorn Frappuccino? What did you think?