Skip to content
Cheryl at The Lifestyle DigsDecember 2, 2018 Hobbies No Comments 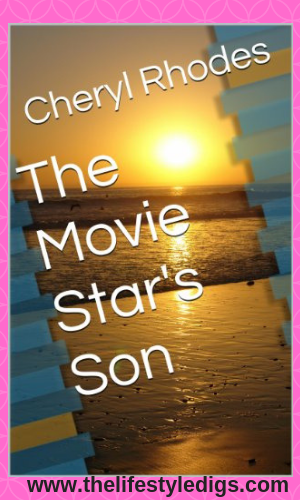 The Movie Star’s Son is a sweet holiday romance with a happy ending on Christmas Eve.

This was a fun book to write featuring vacationing Chris who rescues an older man floundering in the ocean off Southern California – and turns out to be well-known actor Ben Jenkins!

A few weeks after returning home, she’s stunned to see her image on a TV show featuring guests who are trying to locate missing people. Ben is looking for her. A thank you is waiting!

After a rocky start with his lifeguard son, Dave, Chris leaves rainy Seattle for sunny Los Angeles as their romance kicks into gear.

Another Hollywood dream is dashed, and Chris moves up to the central coast where she settles in to a new life, a new job, and a possible new romantic interest.

Dave doesn’t give up so easily!

Don’t miss this holiday read, available on Amazon Kindle for only 99¢, a great price for a full length romance!

Girls dream of growing up and marrying a movie star, but how many have their sights set on his son?

When Chris Stewart rescues actor Ben Jenkins from the ocean, she doesn’t know his son Dave is the nasty lifeguard who busted in her truck window. When they meet up again, Dave knows he’s found the woman he wants to spend the rest of his life with and convinces Chris to leave Seattle and join him in Los Angeles.

Dave is everything Chris has been looking for in a man, and the Los Angeles life is perfect – beaches, surfing, movie stars, sunshine, palm trees, and falling in love. When their pasts catch up to tear them apart and cut their fairy tale romance short, Chris decides to start a new life on California’s central coast. She didn’t count on Dave’s determination to keep searching for her and bring her home.

A lost dog and a surfing accident bring Chris and Dave back together, but can they put the past behind them for a Hollywood happy ending?

Squinting her eyes against the glare of the strong Southern California sun reflecting off the ocean, Chris saw an older man flailing his arms, bobbing helplessly as two to three foot waves washed over him, sucking him under and then spitting him back to the surface. Tossing her shoes onto the sand, Chris yelled at her dog to stay, and ran into the surf. Seeing as how she used to be a lifeguard for the City of Seattle, her old instincts kicked in and she knew she had to do everything in her power to get this man to safety. Breakers crashed over her and she lost sight of the man. Just when she was beginning to question her sanity and wondering if he had made it safely back to shore, Chris rode the crest of a wave, and spotted him struggling in the water.

“Hold on! I’m coming!” She hoped he heard her over the thundering surf.

He turned to her and their eyes locked, his full of fear and hers bulging wide with adrenaline.

Within moments Chris reached him. “Are you hurt?”

“No.” He gasped for breath. “I’m tired. The ocean’s stronger than usual and I can’t get back to shore.”

“Is anyone else with you?” Chris fervently hoped she wouldn’t have to do a double rescue.

“Okay, roll on your back and I’ll tow you in to shore.” There was something familiar about this man. She wrapped her right arm across his chest and kicked for shore. “My name’s Chris. What’s yours?”

She stared more closely at him. Ben? Not the TV and movie star Ben Jenkins! She’d been watching him in movies and on television since she was a little kid. Wow! Who would ever believe this? To keep him distracted while swimming back to shore, Chris asked him questions about his family. In-between uneven gasps of air he told her about his wife, his son who co-starred with him on a popular TV drama, another son, one daughter, and several grandchildren.

The current was strong. The waves tried to suck them back out to sea. Chris became tired and disillusionment washed over her. It seemed she was not making any progress and after a couple of moments of silence Ben spoke.

“This is useless. I’m in your way. Let go of me and save yourself. Swim back to shore.”

Right, Chris said to herself. I really want to be known as the person who let Ben Jenkins drown. Even though she was tiring, there was no doubt in her mind that she would get both of them safely back to shore.

“Nope, we’re going to do this together. You help me by kicking.”

The little extra help on Ben’s part or perhaps a sudden lull in the waves did the trick. The ocean momentarily seized its grip on them, and encouraged that the safety of the beach was close, they found a renewed energy. It was a short-lived reprieve. One strong wave reared and pounded them into the unforgiving Pacific. They were sucked underwater, caught in a tumbling spiral. Chris held on tight to Ben, and just when it seemed she couldn’t hold her breath much longer, the ocean spat them out.

You can read the first couple of chapters for free on Amazon. Try before you buy!