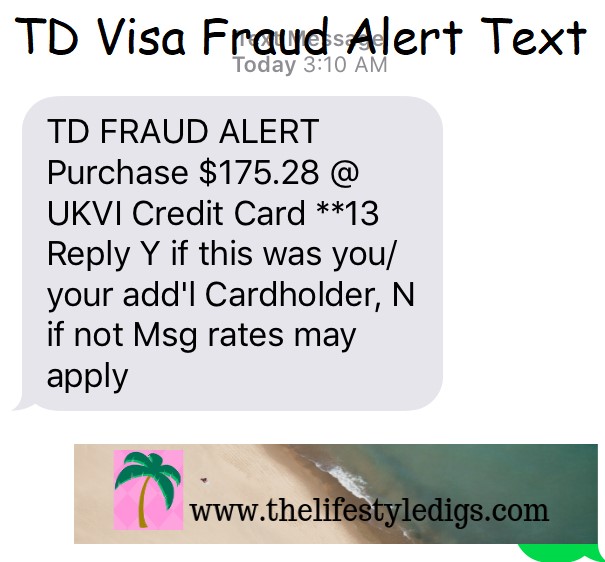 Have any of you seen this commercial on TV? I’ve seen it a few times, but before today I couldn’t tell you which bank or credit card company it’s for.

Who would text me at 3 in the morning when I’m sleeping? If there’s an emergency, everyone I know would be on the phone, not sending a text.

I grab the phone and see who the jerk is texting me because it has to be a scammer. No one I recognize. Something about a fraud alert, and I can see TD, a purchase of $175 and change, and text back Y if I recognize the purchase or N if I don’t.

Got to be a scammer auto bombing texts trying to figure out if they’ve got a live body at any of these numbers. If you text back, their scam will be on.

Wonderful. I have a lot of trouble falling asleep and staying asleep, so when something wakes me up – I’m up. I don’t usually fall back to sleep.

Oddly enough I eventually fell back asleep and woke up only two more times before finally waking up for good just after 7am.

About an hour later, I remembered that text and took another look. It said my TD Visa ending in **13. I grabbed my wallet and checked the Visa. The number ends in 13. What are the chances the scammer texts me the exact last two numbers of my Visa?

It might take a few tries to get it right, but this guy got it right the first time. 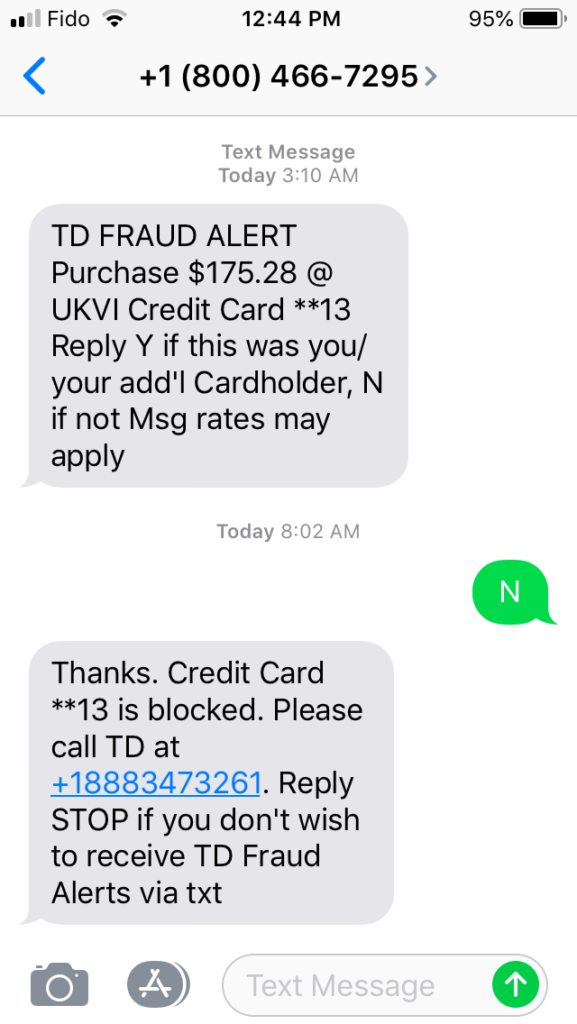 I called the toll free customer service number on the card and am stuck on an automated system. This gives me time to check my balance and recent transactions.

I don’t use my TD Visa very much because of that problem I had with the rogue employee at TD Bank. No recent purchases, and I don’t carry any debt on it, so my full balance should be available.

That’s not what the automated message tells me and my heart sinks. I check for recent transactions and it says $175 so I press the button to connect to a real person and waited about 10 minutes.

During that time I responded N to the fraud alert text!

When a real person at TD finally answered, I told him I was awakened by a fraud alert text. I  confirmed I didn’t make that purchase. He transferred me to the fraud department.

I spoke with a nice guy named Rudy who said someone bought a travel visa for Britain on my Visa. Not me! I have no interest in traveling to Britain. Canadians don’t need a travel visa to visit there anyway.

Rudy also mentioned that someone had made a few unsuccessful attempts to buy things using my Visa but they’d been blocked due to incorrect numbers. Assuming he meant the expiry date and/or security code from the back of the card. He said these scammers will keep trying different numbers and then eventually they get a hit. My TD Visa never left my possession. It makes me wonder how this happened, other than scammers are getting really sophisticated with their technology to try multiple numbers until they have success.

My card was clearly compromised so Rudy cancelled it and is sending me a replacement card. He offered to send it to a TD branch for pick up because that’ll be faster than mailing it to me. I told him the mail is fine. It’s not like I use the card that much anyway!

Here’s the strange thing. I don’t remember ever signing up for fraud alerts to be texted. Obviously I must have signed up for that service on one of the rare times I spoke to a TD Visa rep or I wouldn’t have got the 3am wake up call..

Sign up for the fraud alerts, that is. Not the getting waken up part!

I just want to remind everyone to look into signing up for fraud alerts. At Coast Capital, they have a service (no fee) to text members whenever a transaction goes through their account. I used to subscribe to this service but it was kind of spotty. Apparently the server Coast Capital uses doesn’t like my cell phone provider, Fido, too much. Eventually I unsubscribed.

Think it won’t happen to you? I previously had an issue with my Home Depot card. Ten years ago my Envision Financial debit card was compromised for $20.

That’s two for me.

Usually your credit card company doesn’t hold you liable for fraudulent charges if your card is stolen. Envision took their sweet time getting that $20 back into my account!

The charge for the British travel documents will get wiped off my Visa and I’m not responsible for paying it. Visa will probably charge back and that’s thief’s travel visa will be cancelled.

This incident is probably a good reason why a person should always have at least one back up credit card they can use.

Have you ever had a credit card compromised when it never left your possession?