Skip to content
Cheryl at The Lifestyle DigsNovember 26, 2017 Health 2 Comments 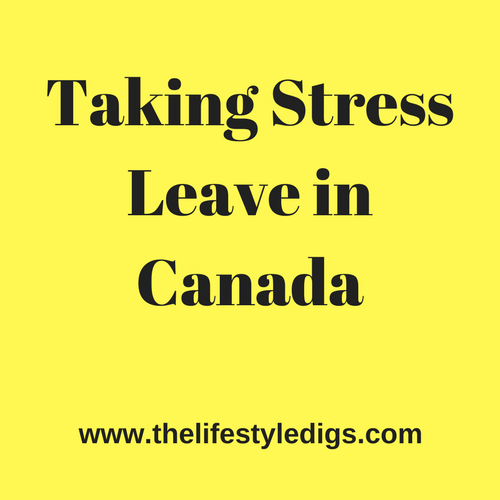 I follow a website called the Canadian Money Forum. This is a community forum board with several sections such as General Finance Talk, Investing, Frugality, Retirement, etc. People can register and ask questions and respond to others. I’ve found the people here to be knowledgeable, compassionate, and helpful. Mostly I’m a lurker, and my investing style tends to run as a piggyback investor. I watch what others are saying and recommending and research the company to see if it’ll be a good fit for me.

There was a recent discussion started by a woman who’d been off work on stress leave and when she returned to work after a few month’s absence, she was fired or laid off. It’s a little sketchy which one it was. Either way it doesn’t matter. She’s out of work.

In 2008 I was in a car accident. A new driver ran a red light and crashed into my car. Fortunately I survived and none of my injuries required surgery, but I went by ambulance to the hospital and was diagnosed with moderate to severe whiplash. I was in a lot of pain. Years later I still have some lingering pain in my back. I was off work for a week, then I returned on a shortened work day, about 4 hours, while I also attended physiotherapy. In the months following the crash I was on different medications which affected me both physically with nausea, and possibly emotionally too. My perspective may have been altered by the meds and what was going on around me. I did what most people do and returned to work, and worked in pain, because I couldn’t afford to take time off. Not with a mortgage and non-stop bills to pay.

I found it difficult at work. Dealing with the pain and focusing on my duties. It didn’t get easier and about 6 months later while visiting my doctor I said I just couldn’t take it anymore. I was so stressed out at work.

He told me he didn’t like putting people on stress leave because most of the time when they were medically cleared to return to work, they were laid off.

And I thought about that while reading the lady’s story on the Canadian Money Forum. That was exactly what happened to her.

I remember that happening to a co-worker back in the late 90s. P was already working at the company when I was hired. She was an older woman, I’d guess around 60, but seemed very nice. She enjoyed reading and we chatted a lot on lunch breaks.

And then she changed.

She was no longer the nice, friendly, helpful woman. She alienated her co-workers. I believe a lot might have had to do with the condo she owned and the stress it was causing her. There was a huge problem in British Columbia with leaky condos and homeowners stuck with absorbing bills to repair them, with levies in the tens of thousands of dollars, in some cases a couple of hundred thousand. Many people walked away from their homes. I don’t know for sure if she lived in a leaky condo because a lot of owners kept quiet about it and tried to sell their units. I know that in her underground parking there was a leak right over where she parked her car. A mystery leak that was unable to be identified and repaired, according to her. The leaky substance was leaving a white stain on her car. The strata offered her another parking spot but she refused to take it. I asked her why. It seems to me she’d want to lessen the damage to her car, but she was stubborn. “That’s my assigned parking spot, and I’m not leaving it.”

Then she’d complain about the damage to her car.

At work we got a lunch break and two coffee breaks, morning and afternoon. P stopped taking her coffee breaks and going home half an hour early. All on her own. Without getting the OK from management.

Our supervisor sent out a memo, not naming names, but all the office knew there was only one person doing this, and reminded staff they could not leave work early in lieu of not taking a coffee break. The supervisor said if anyone was overwhelmed with work that they were having trouble taking the time for a coffee break, then come see her. The employment standards act was quoted in the memo stating what the company was legally allowed to comply with breaks, and a reminder that the company was going over and above the legal requirements by allowing the coffee breaks.

The next memo that was sent out stated the company would now be following the employment standards law to the letter and effective immediately all coffee breaks would be cancelled.

That really changed the attitude in the office. The only reason this happened was because of P’s actions. She became persona non grata and nobody would associate with her anymore. She’d been miserable to everyone for awhile by that time.

Also the supervisor was riding P’s ass. I felt kind of sorry for her, but P really didn’t go out of her way to be helpful in the office. She was doing the invoicing for the trucks that were going out every day and had no interest in helping others in the office who needed assistance.

Then one day she went off on stress leave.

Another lady in the office knew how to cover that job and the supervisor asked her to show me how to do it. Bottom line was, which ever one of us was doing the invoicing, we could get the work done by lunch time, which made the supervisor gloat. She had suspected all along that P was just pushing papers around trying to look busy. Actually I think the rest of us office staff already knew that.

The problem of course was the invoicing was putting me behind in my work – I was data entry. And now I’m starting to feel stressed.

I don’t recall how long P was off on stress leave, about 3 months I think. I know one day I was talking to the supervisor about something, and I mentioned to her that the office staff had gone back to being relaxed and easy-going with P not at work, and she said she’d noticed that too.

I didn’t get any raise out of doing the job of two people either.

That job became obsolete for me in 1999 when the company decided to relocate to Alberta.

Getting back to the time when my doctor put me on stress leave with the warning of possibly no job to come back to, I was willing to take the risk. I’d been looking for other work anyway.

I was off for around 2 months. During that time I got used to the new pain medication and I was feeling better physically and mentally. I was feeling really good.

And then I went back to work.

After about a week I wasn’t feeling so good any more. And I was really disappointed that I hadn’t gotten laid off.

I hung in for about 4 months because I’d been really certain I was going to get laid off. Our department’s assistant manger quit, one of my co-workers was laid off, and my manager quit. I was preparing to take 2 weeks vacation and I decided I wasn’t coming back to work. My plan was the day before my vacation ended to come into the company and hand in my pass and say I quit.

The day before I left for vacation…. I got laid off!

Yes, I was happy about it. I got offered a really good severance package, about 5 months pay. Also it made me eligible to collect employment insurance.

Neither of those things would have happened if I’d quit. You can be sure I kept my mouth shut.

I was happy. I was relieved. I finally got laid off but it took 4 months after I’d returned from stress leave.

It worked out for me.

If your job is stressing you out and you’re considering asking your doctor for a stress leave, just remember my doctor’s warning – there might not be a job for you when you’re ready to come back to work.

If you’re taking a stress leave from work, use this time to apply for new jobs.

Have you taken a stress leave from work? Did you lose your job? Tell us about your experience in the comments below.