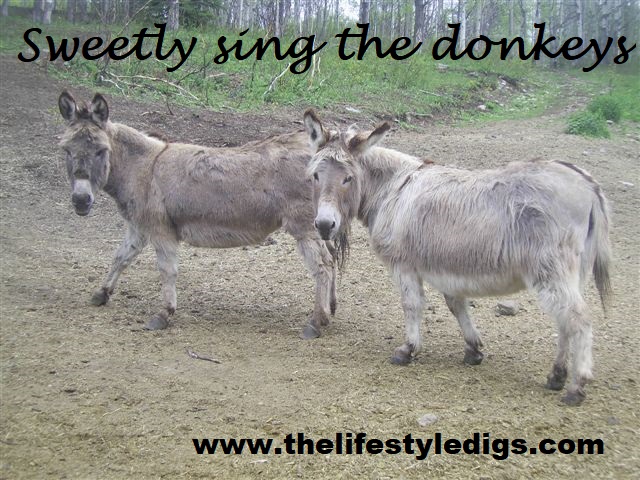 I grew up in a small town that was surrounded by farms, the closest one right across the street. I begged my father to buy a farm so I could get a horse, but unfortunately I was doomed to be a city girl sitting on the wrong side of the country fence. I may have been acreage-challenged but that didn’t stop me from hanging out at friend’s farms, buying horses, and sinking paychecks into a couple of decades worth of horse boarding fees. It’s all about finding bliss with horses. Finally the day came when my dreams came true and my (now ex) husband (aka The Deadbeat) and I moved ourselves and our horses to a farm out in the country. Well, make that the outskirts of town as the nearest subdivision is about three blocks away. It wasn’t long before we heard the coyotes howling at night, and this time right below our bedroom window instead of way off somewhere out in the country. Unfortunately we also spotted coyotes running down the fence line into the barn where two mares and newborn foals were stabled.

Solution: insert two female mini donkeys that we picked up at the local horse rescue. While we were driving home with our new long-eared friends the Deadbeat admitted he hadn’t asked for the names of the donkeys. Inspiration struck and I named them Laverne and Shirley, aka the coyote posse.

Next came a crash course in Donkey 101. We upgraded the fences so the posse could patrol the entire property with the openings low enough for donkeys, but too high for horses to duck under. The donkeys can access two large shelters and have twenty acres to roam around, but they’re under the false impression that the carport and front door is primarily their new home and secondarily their toilet area. Judging by the deposits they spend a lot of time here. I have to muck out the sidewalk just to get inside the house with clean shoes. 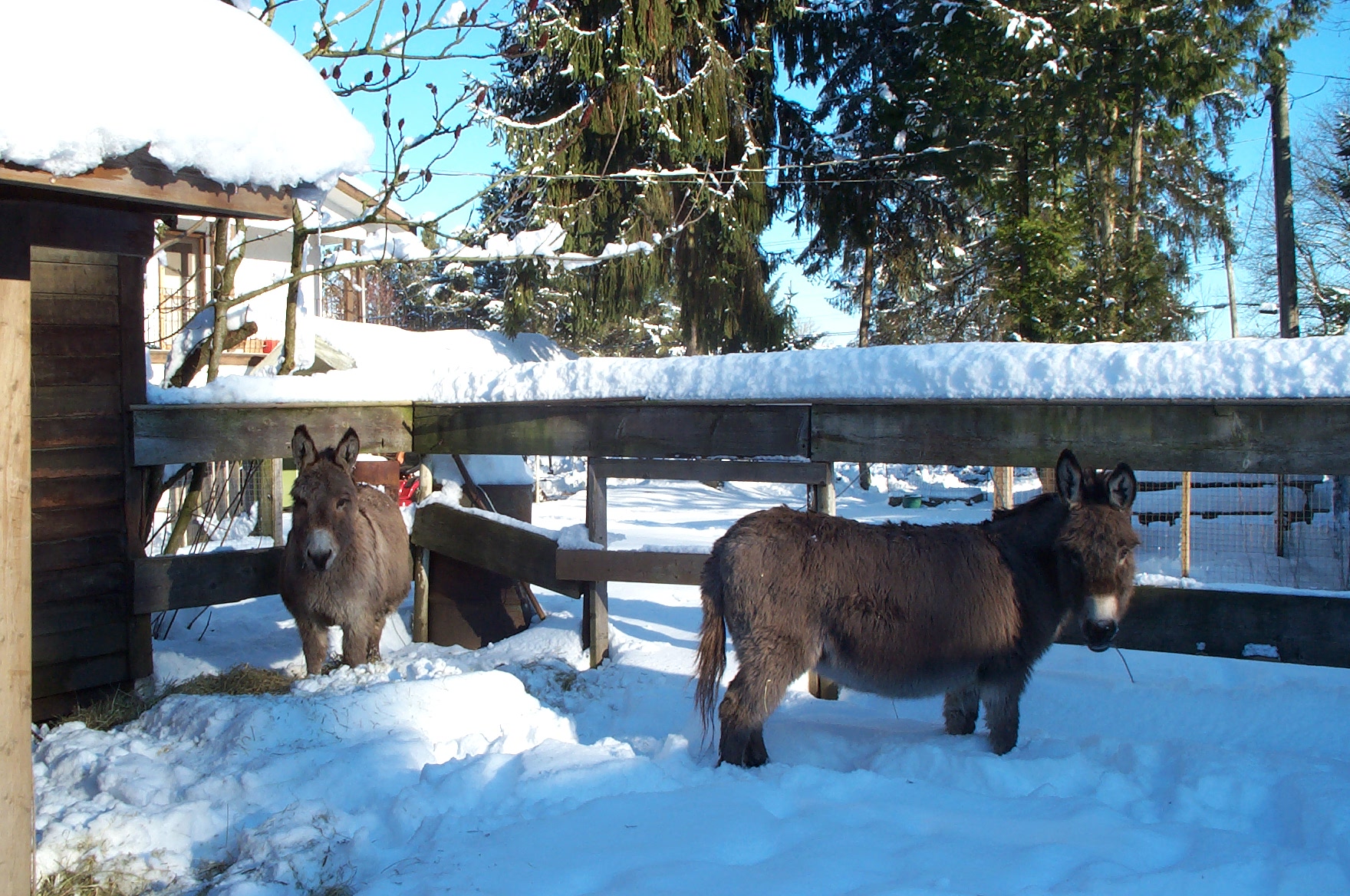 I’m often reminded of the old children’s rhyme: “Sweetly sing the donkeys at the break of day. If you do not feed them this is what they say. Hee haw. Hee haw. Hee haw. Hee haw. Hee haw.” Forget daybreak. Whenever they feel like it, hungry or not, they’ll open their mouths wide and bray at the top of their lungs. These two little donkeys make enough racket to drown out a herd of trumpeting elephants. Sometimes Shirley will get into another field and Laverne can’t figure out how to join her and she’ll bawl about it, long and loud. One night the donkeys kept the Deadbeat awake with all their heehawing. He looked out the window and saw one of them running the fence line, so my guess is that once again Shirley managed to give Laverne the slip. Sometimes they bray at dogs walking past on the street. Perhaps they think they’re funny looking coyotes? The Deadbeat also claims they bray when visitors come onto the property. Watch donkeys? And yes, in addition to all the other braying, they do “sing” first thing in the morning when they think its time to get their morning grain. They’re more reliable than roosters. 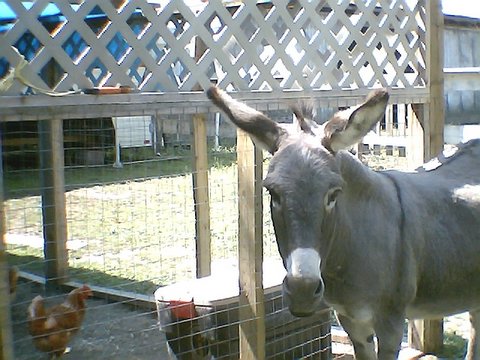 Donkeys are little scavengers and eat everything they can sink their teeth into. I left a bowl of dog food on the lawn and they polished it off. The Deadbeat knocked a watermelon off the sundeck – don’t ask – and it exploded on the lawn below. The donkeys gobbled it up, rind and all. Forgotten vegetables and fruit in the fridge? No problem. Toss it outside for the donkeys. I’m still trying to figure out how they eat plum stones. I gave Laverne an unpeeled banana and she gobbled it down whole.

When we moved to the farm I was happy to see several mature grape vines in the backyard. Throughout the summer big bunches of green grapes appeared. I watched my bumper crop closely, from time to time testing one but it was always sour. Then one day I saw the green grapes start to turn purple. That explains why those little green grapes were always sour – they hadn’t ripened into sweet purple ones yet. It was only a matter of days until they fully ripened and then I’d be enjoying them by the handful. But it was not meant to be. I arrived home and checked my crop. Gone! Not a single grape left. Donkeys! I got smarter the next year and put a small fence around the little vineyard.

Donkeys don’t have discerning tastes. They drag cardboard boxes out of the back of the truck and munch on them. One day I caught Shirley with an envelope in her mouth. Thinking it might be important I wrestled her for it, prying her locked jaws apart, and finally she opened up her snappers. It was just some junk mail she dragged out of the burn barrel. 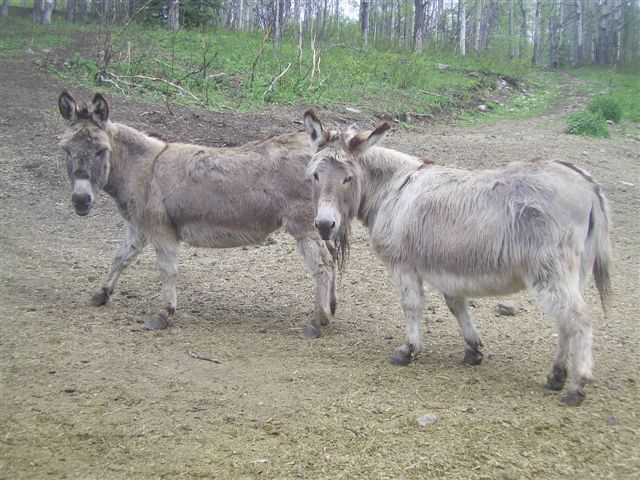 Laverne and Shirley entertain us as much as the old TV show starring their namesakes. Sometimes they fight and push each other around at dinner time. Shirley is smaller but she pins her ears and leans all her weight into Laverne. Sometimes they get mad at a horse and kick out, never connecting, and then run as fast as their little legs can go before the horse retaliates. They don’t seem to like my dogs too much. I caught Shirley chasing one of my dogs and she put the brakes on real fast when she galloped around the corner and found me standing there with the dog cowering behind my legs.

The Deadbeat was told if he fed the donkeys a special meal at six o’clock on Christmas Eve and went back outside at midnight they would talk to him. In a scene reminiscent of Linus waiting for the Great Pumpkin, he feeds them their special meal each Christmas Eve and then dutifully returns to the barn at midnight but so far Laverne and Shirley haven’t told him anything he doesn’t already know.

Someone told us that donkeys can live till they’re forty years old, so we’ve made a lifetime commitment to listen to our sweetly singing donkeys and enjoy their comical antics. Or perhaps they’ll outlive us. He who brays last wins.

3 thoughts on “Sweetly Sing the Donkeys”