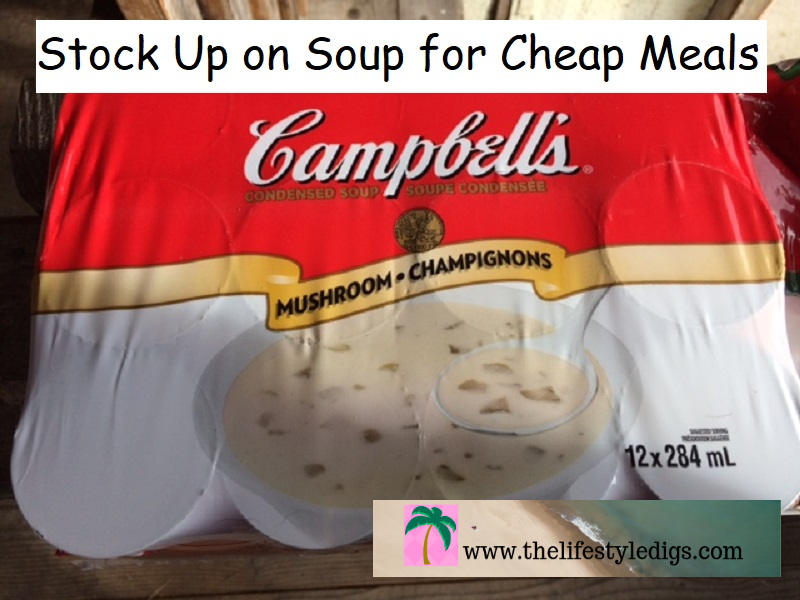 Every now and then I come across blogs that recommend buying soup at the dollar store.

I think it’s great that dollar stores sell the Campbell’s brand. A can of Campbell’s soup is going to taste pretty much the same no matter where you buy it.

You can also buy soup when it goes on sale at the grocery store for $1. Whether or not you think a dollar is a good deal on soup, when I’m at Walmart and see the Campbell’s Soup is marked down to a buck, there’s always a bunch of people standing there loading up their shopping carts. I think the regular price is $1.25. Not a huge savings, but take whatever deals you can get when you stock up on soup for cheap meals.

And here I’d like to ask, why is it that Campbell’s Manhattan Clam Chowder never goes on sale? That’s even if the grocery store stocks it all. That is one tough soup to find on the shelves anywhere!

If you’re having the same problem, check out my recipe for easy Instant Pot Manhattan Clam Chowder!

I always keep cans of soup in the house. It’s a fast meal. Open a can, heat it up, and soup’s on in minutes. One can of soup makes two meals for me. Even if I pay a dollar a can, that’s 50¢ a meal.

I buy Campbell’s soup by the case. That’s twelve cans. 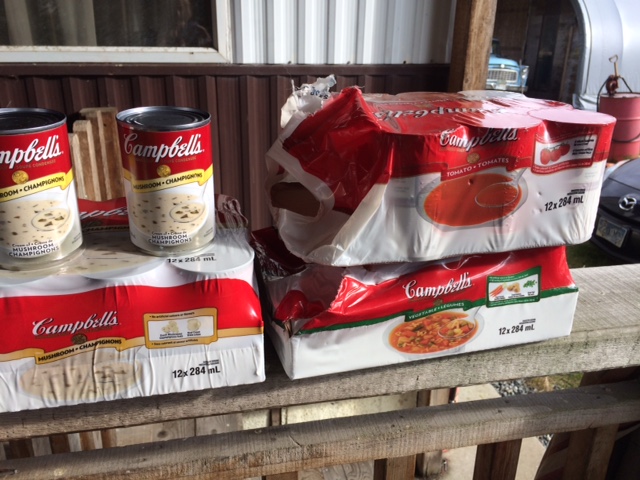 But … I wait until I see them on sale and then I’ll buy a case.

For example, this past week Save On Foods had cases of Campbell’s Soup on sale for $6.99.

Anytime I spot a case of Campbell’s Soup on sale for $7 or $8, I grab it. A case usually runs around $10, maybe a bit more depending on the store. That’s a deal if you consider a single can of soup costs at least $1.25. Or a buck if you went to the dollar store.

The only Campbell’s soups I’ve seen at the grocery stores that are sold by the case are Chicken Noodle, Tomato, Cream of Mushroom, and Vegetable.

Seeing as how I don’t eat meat, I never buy the Chicken Noodle soup.

Don’t let me stop you. If you like that soup and you see it on sale – grab it! 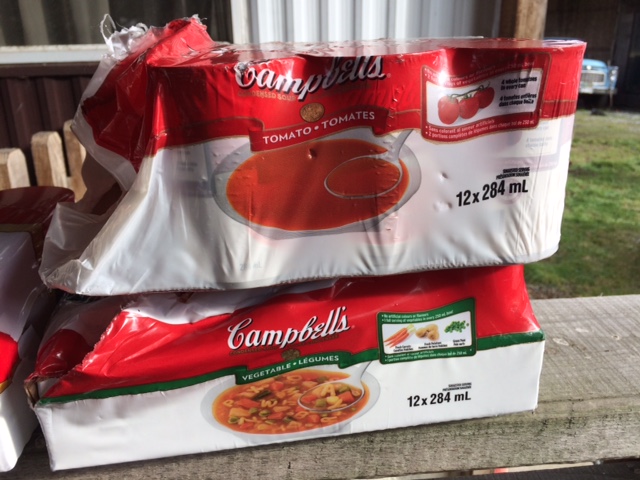 There’s been many times, especially on cold days, when I’m coming home from the farm and trying to figure out what to make for lunch or dinner. Especially if it’s getting late and I don’t feel like cooking anything. I open a can of soup, grab a few crackers, and call it a cheap meal.

I like a little variety, so I keep different soups on hand at all times.

It’s always better to buy a case of Campbell’s soup when you see it on sale, instead of paying full price for it. Swing by the soup aisle when you go shopping. You don’t want to miss out on a case lot sale, especially if you’re getting low on stock at home.

My all time favorite soup is Cream of Mushroom. Yummy! 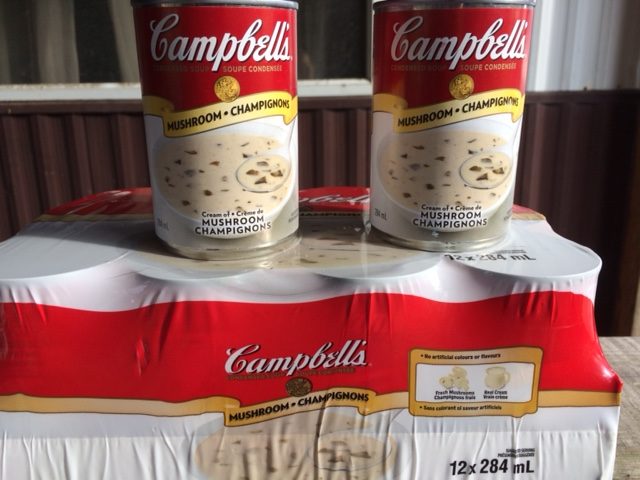 I buy a case of Campbell’s Cream of Mushroom soup and I know I’m going to make a few meals out of that, probably for less than 50¢ a serving because I bought that case when it was on sale.

Cream of Mushroom soup is great on its own, but it’s versatile in many recipes. 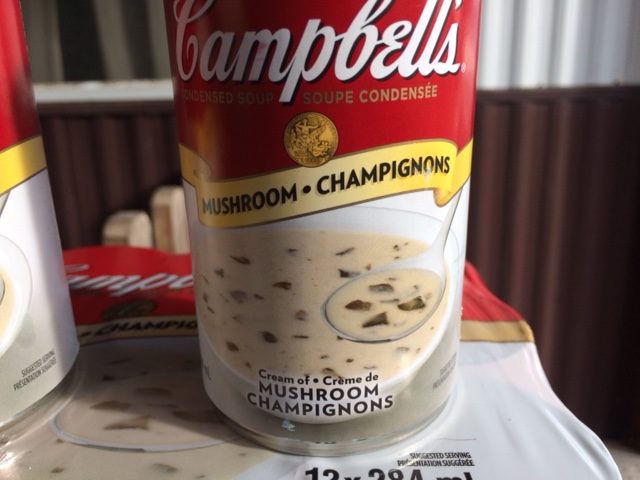 One of my favorite comfort food recipes I learned from watching a TV commercial many years ago. Empty a can of Cream of Mushroom soup into a pan and heat on the stove until it’s boiling. (Important: do NOT add water.) While you’re waiting for the soup to boil, fill that empty can with Minute Rice. When the cream of mushroom soup comes to a boil, stir in the Minute Rice. You want to be fast so it doesn’t burn. This can be tricky because the Minute Rice sticks to the leftover Cream of Mushroom soup inside the can. Once the Instant Rice is mixed in, put a lid on the pot, and remove from the heat. Wait five minutes. Eat.

I try to stretch the Cream of Mushroom rice into two meals, but I often end up eating the whole thing. I’m really working hard on portion control, but sometimes I lose. This recipe also makes a great side dish.

Here are a couple other recipes I make with Cream of Mushroom soup.

Oddly enough, I’m not too keen on tomato soup just eating it on its own as soup. Too tomato-y? Too plain? The main reason I keep a case of Campbell’s Tomato Soup on hand is for the times I want to make my Baked Beans in Tomato Soup Sauce. 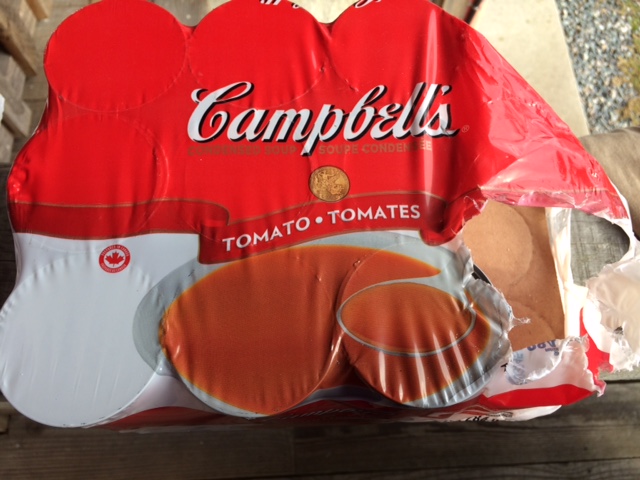 What else can you do with Tomato Soup?

I found a recipe for Tomato Soup Spice Cake with cream cheese frosting that I’m not entirely sold on, but seems to get good reviews.

Here’s a recipe for Chocolate Fudge Cake that uses a can of tomato soup. I love chocolate but this recipe calls for a cup of cocoa which seems like a lot to me.

I’m not sure I can get behind any cake that has weird ingredients in it.

Vegetables and pasta letters. Campbell’s Vegetable Soup is a good choice for those days when you want a quick, cheap meal. 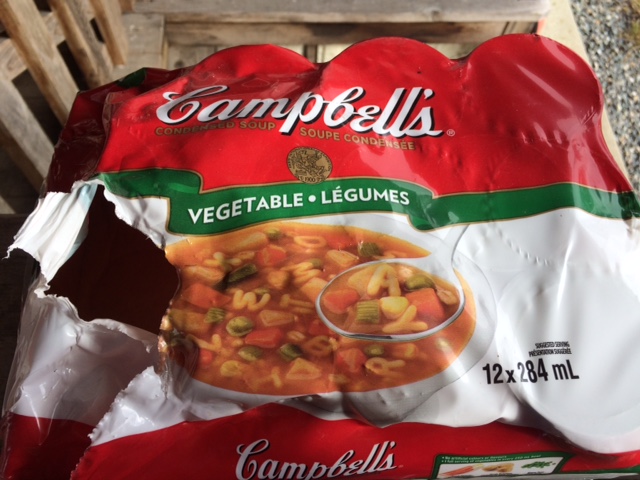 I don’t know what else I can say about Campbell’s Vegetable Soup, and I don’t know any recipes that call for tossing in a can. If you know a recipe that calls for a can of vegetable soup, leave a comment!

I’m kind of torn on Campbell’s Vegetable Soup only because I frequently make Instant Pot Vegetable Barley Soup. My homemade soup doesn’t have those neat pasta letters, though…

I used to have a cookbook for cooking with Campbell’s Soups. I probably still have it. At least I don’t remember throwing it out or giving it away! Most of my cookbooks are sitting in a box in my storage room because I live in a small space right now and don’t have room for them.

I checked Amazon and I don’t see any recently published Campbell’s Soup cookbooks.

You can find recipes all over the Internet – for free – that use a can of soup. You can check out Cook with Campbell’s and the Campbell’s Kitchen.

Any way you look at it, soup is a cheap, healthy meal. When you’re on a budget, always make sure you have at least one case of soup in the house for those times when money is tight or when you just don’t feel like cooking.

Open a can of soup. 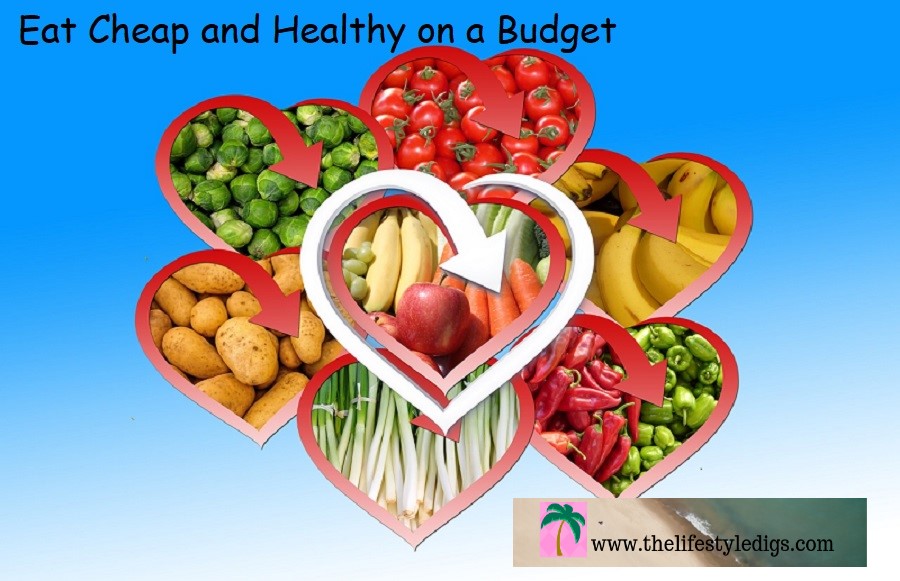