Skip to content
Cheryl at The Lifestyle DigsApril 20, 2019 Recipes No Comments

Who else is like me and hungry all the time?

Who else is watching their weight and their dollars?

I remember drinking Tang when I was a kid. I don’t remember if my mother thought it’d be a good idea to serve Tang instead of orange juice. After all, the astronauts drank Tang, so why not us mere earthlings.

I have finally jumped on the Metamucil bandwagon, and the orange drink reminds me of Tang, even though it’s been decades since I’ve drank any Tang. Apparently it’s still around, just spotted it on Amazon! Can’t say as I recall seeing it in the grocery store, but I haven’t been looking either.

According to Metamucil’s webpage, the powdered drink mix is supposed to help curb hunger and help with digestive health and regularity. Supposedly works as a supplement to people on a weight loss plan. After being on a plateau for awhile, I decided to give it a try. I spotted it on sale at London Drugs and bought the sugar-free berry flavor. 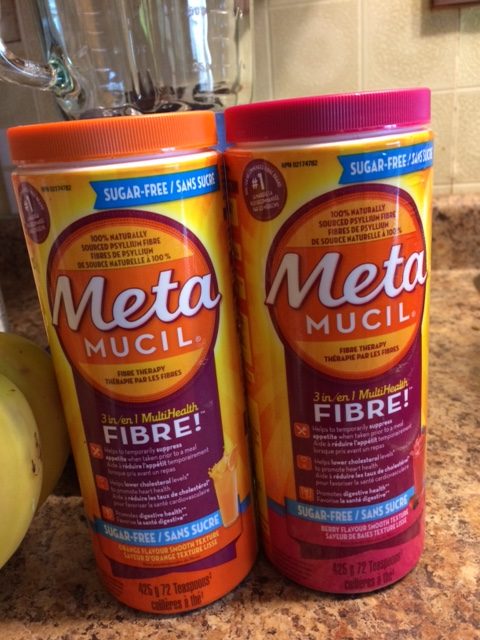 Add a spoonful of crystals to water, stir, and drink. Surprisingly it was pretty good! I took that two week Metamucil challenge and drank one daily, but I didn’t really notice any difference. I’m not even sure if my weight dropped a bit, but overall for the past couple of months there’s been slow and steady progress on that front.

I eventually bought the sugar-free orange. They each have 72 servings, though I suppose that depends on how generous you are with your measuring spoon. Easily dozens of drinks from one container and when I bought them, they were around $14 each, so at 20¢ a drink, certainly a much cheaper option than a lot of weight loss supplements out there.

I decided to jazz up the orange Metamucil and make a smoothie.

This is a really easy smoothie. Take a cup of milk and put in a blender. I use cashew milk that has 25 calories per cup, but you can use the milk or milk substitute of your choice.

Add a spoonful of orange Metamucil.

Then toss in a banana.

Finally put in 4 ice cubes. You could add a couple more ice cubes if you like it really cold.

Blend it for about 30 seconds.

Pretty low in calories. About 90 calories in a banana and 20 in a spoonful of sugar free orange Metamucil. The calories in the milk will vary depending on what type you use. And there’s no calories in ice cubes!

It doesn’t taste medicinal or fiber supplement yucky with a nasty aftertaste. It’s almost like walking around the mall with your Orange Julius!

I add a muffin and call it breakfast. It keeps me going for hours.