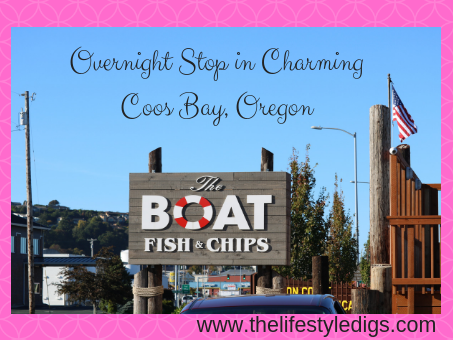 After having a few birthday adventures and shopping on the drive south on Highway 101 from Lincoln City, I stopped for the night in Coos Bay, Oregon. I’d booked the Motel 6 because they allow dogs for no extra charge.

I arrived 5 minutes before the 3pm check in time. Normally this isn’t a problem and I’m able to get into my room right away. I’d only been snacking on granola bars all day and wanted to unload my car and head out for my birthday dinner. Unfortunately, the room wasn’t ready. The clerk said they’d been fully booked the night before, apparently fire evacuees staying here as well as tourists, keeping the motel busy midweek in the off season. She called housekeeping and they said about 30 minutes, so she told me to come back then for a key.

I took the dogs for a walk, but it’s a light industrial area and there’s really nowhere suitable to walk around here, and it’s not safe walking along Highway 101. On the back side of the Motel 6 is a grass area and it was full of dog shit! Really nasty. Obviously a lot of irresponsible lazy ass dog owners stay here.

I returned to the Motel 6 and saw a housekeeping cart outside my room. No staff in sight. Well, at least not in my room. I did see four housekeeping staff while I was sitting on a bench outside the office, and yes they were busy. As I was waiting, I saw several people check in, get their keys, and go to their rooms. I’m not sure why I wasn’t assigned the first available room when I arrived. Finally a housekeeper shows up and takes care of the room. It’s nearly 4pm when I get the key.

The Boat Fish and Chips

By now I’m pretty hungry, and I unloaded my stuff and set the GPS for The Boat, a fish and chips restaurant that had good reviews online. It was about a mile or so away, a little further south on Highway 101. This is the first time my GPS had a fight with me and insisted we’d arrived at the destination when we hadn’t. Thinking I’d missed it, I drove around the block for another try. In this part of Coos Bay, Highway 101 is separated for north and south bound traffic by about half a block, so it’s one-way traffic in each direction. Eventually I crossed over the highway and went a little East wondering if I should just ask someone on the street if they knew where it was when I spotted it. Whew! 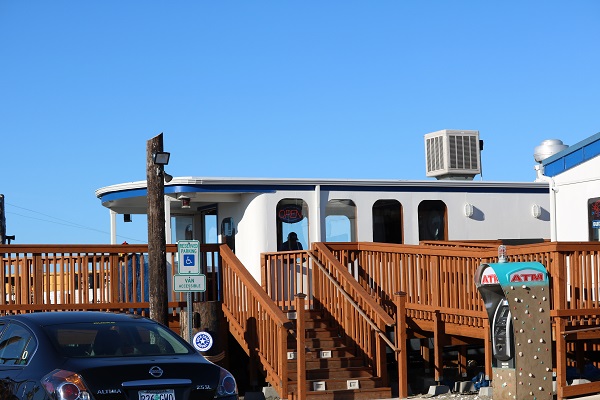 It’s a cute place sort of shaped like a tug boat with a nautical theme. I thought it would be like the other fish and chips places I’d been to where you walk up to the counter, place and pay for your order, and they’ll either call your number or bring it over to your table.

A friendly waitress stopped me and said to take a table and one of them would bring a menu over. I asked if dogs were allowed on the sundeck, thinking it would be nice to sit outside with my dogs, and she said absolutely, they love dogs. I went back to my car for my big girls and brought them up. There was only one other table on the deck occupied and those customers were just getting ready to leave. They came over to say hi to my dogs first. There aren’t any umbrellas at the tables, so the only shade I could scrounge up was at the wall of the deck, so I took over the table closest to that shade so the dogs could get out of the sun. Of course, being ungrateful dogs, they stubbornly chose to lie down in the sun. 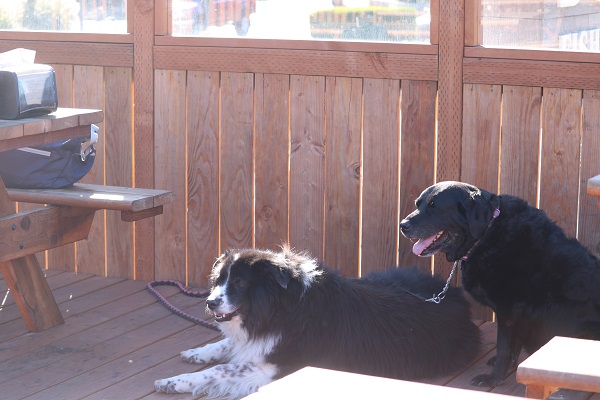 Some of The Boat staff came over to say hi to the dogs. One of the ladies had just ended her shift and we chatted awhile. Things had been rough for her since her husband passed away two years earlier. I told her I was sorry for her loss and we talked about dating and moving on with our lives. It’s not easy being an older single female to find a good paying job and worrying about paying the bills today and saving for retirement. I talk about that a bit more in this post.

The one thing I regret about eating at The Boat was I didn’t think about asking her if she had dinner plans and if she’d like to join me. 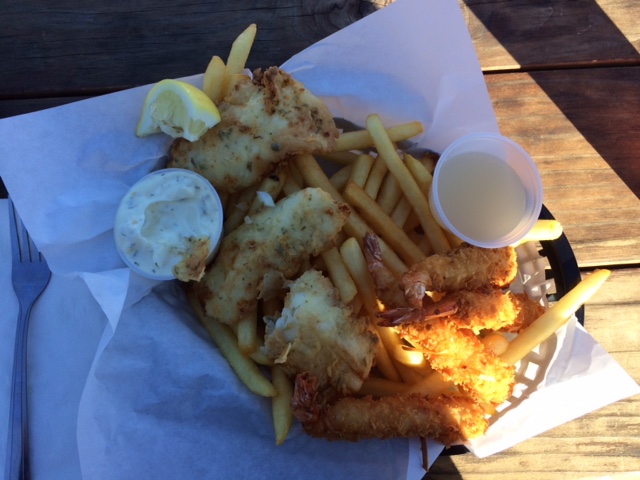 I ordered the half/half combo with fish and chips and coconut prawns. For an extra $3.89 I added on the coleslaw salad and house dessert – tart filled with pistachio pudding and whipped cream. Gotta have dessert on my birthday! For a drink I enjoyed strawberry lemonade that included two refills. The Boat also serves beer and wine, but in my opinion the strawberry lemonade is the best drink they offer!

The Boat served up the best fish and chips on the Oregon Coast. I ate very good fish and chips at other restaurants, but when I add in the atmosphere, the nautical theme, dog friendly deck, and warm, friendly servers – The Boat wins hands down!

Share on FacebookShare on TwitterShare on LinkedinShare on Pinterest
Coos Bay, fish and chips, Motel 6, Oregon, Oregon Coast, The Boat