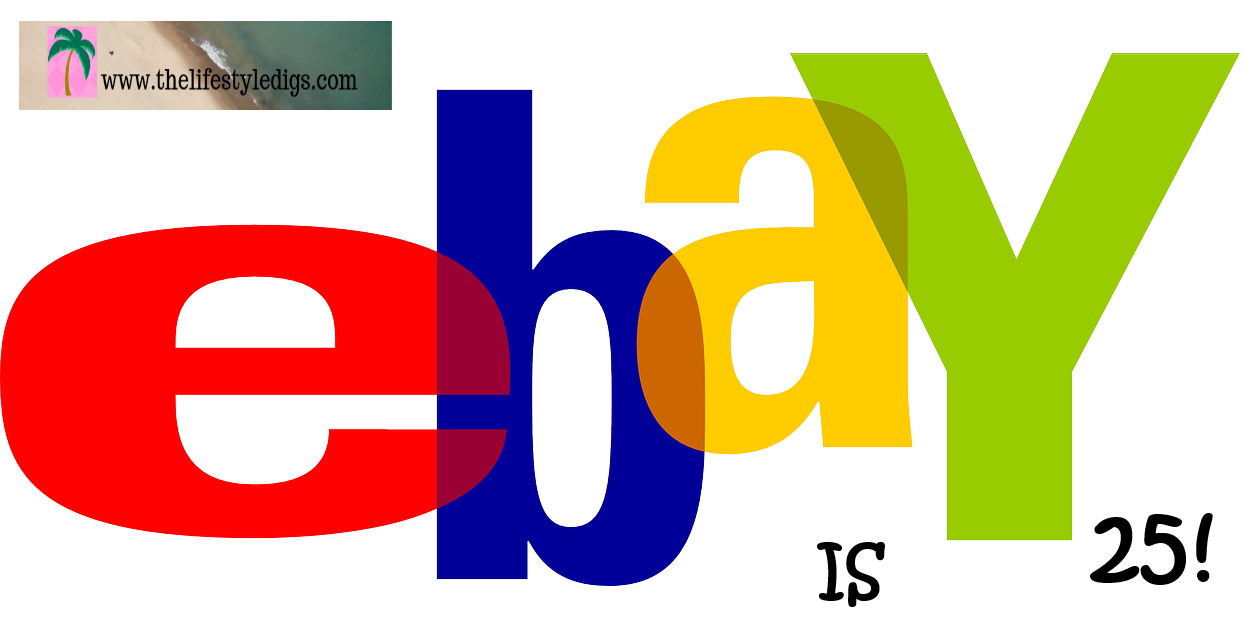 How many of you out there knew that eBay is 25 years old? 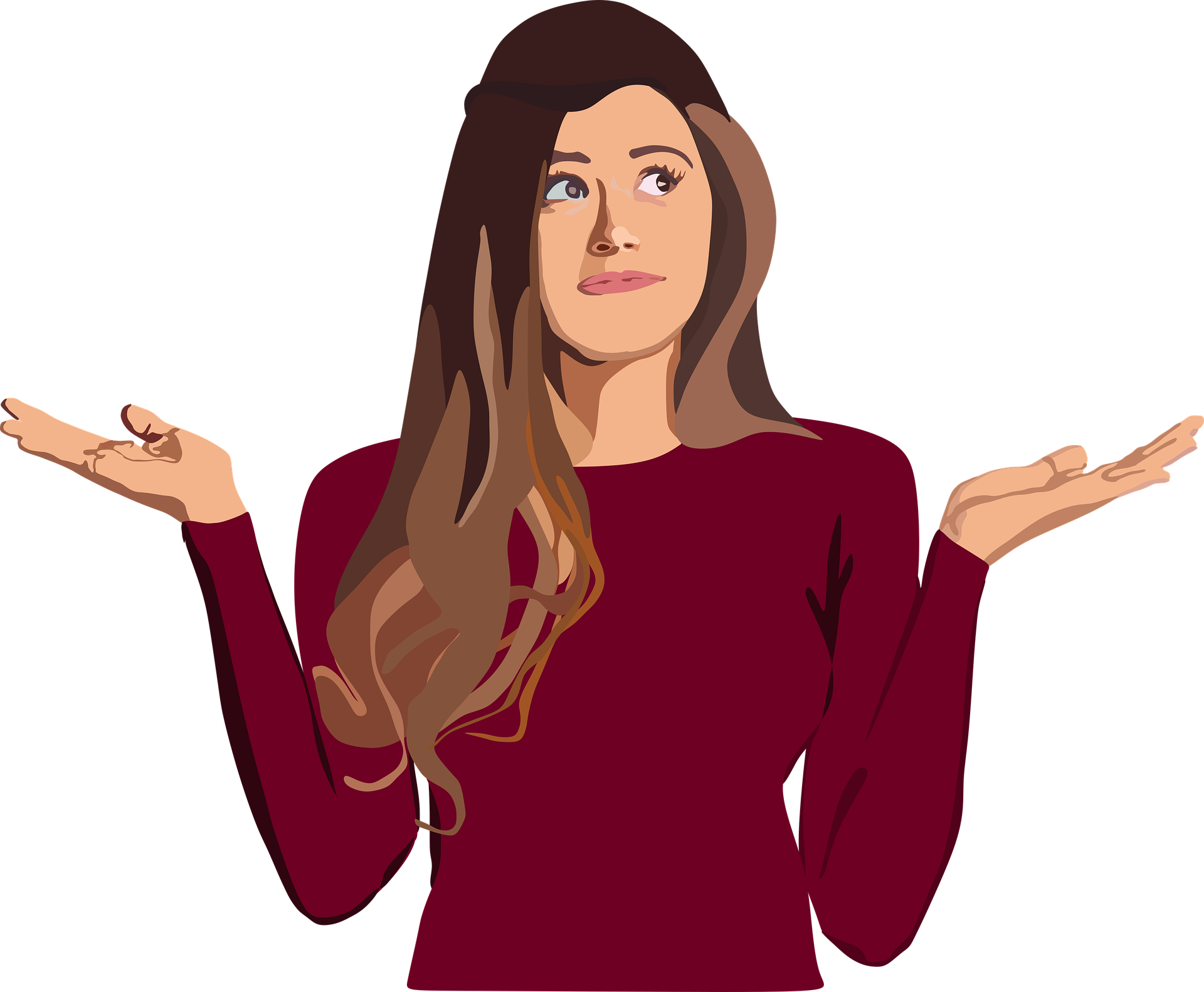 Nope. You won’t see my hand up in the air.

I’d have been in the dark, except eBay sent me an email thanking me for being there from the beginning with a $25 coupon!

Well I’m gonna use it!

Even though eBay claims I was there from the beginning, I might not have been because eBay began in 1995. It looks like I joined the party four years later.

I’ve bought a lot of things from eBay over the years, and even sold a few things.

After the deadbeat and I broke up, I was mostly worried about surviving.

Oddly enough, one of the things I remembered to do, like a day later, was change the password on the eBay account. I also changed the “about me” that other eBay users can see. For some reason I thought I had more stuff written, but apparently it’s just a sentence about the dogs in my profile photo.

The eBay account was used by both of us and has 100% positive feedback. If I had to, I could have created a new eBay account and built up my ranking again.

But I didn’t have to. I was the fastest to change the password. Ha ha!

The email address is in an account in my name, that I pay the telecommunications company for. Now that was the first password that I changed – same day! He got locked out of all our email accounts immediately.

If he’d attempted a lost password recovery with eBay, that would have generated an email to confirm if that was really me who’d forgotten the password. And if not, to contact eBay right away because someone’s trying to hack my account.

There’s no doubt in my mind that eventually he’d have thought about logging in to eBay to change the email and password. So HA to the deadbeat! Too slow and I got custody of the eBay account!

With the $25 coupon, eBay also reminded me of my history. 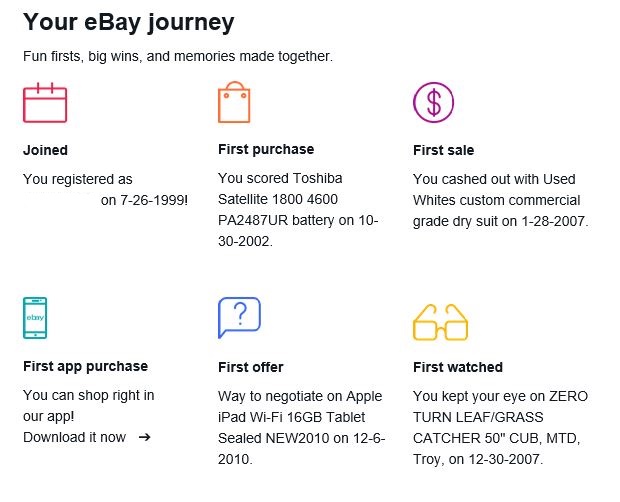 It looks like I had my account for three years before I put my toe in the water and made a purchase. Hmmm. I’m not so sure about that.

So what did I buy?

I had to do a Google search on that one. Apparently, it’s a lap top computer. Forgot about that one. Obviously needed a new battery. OK. Whatever you say, eBay.

First sale? That was a used dry suit.

Not mine. I’ve never owned a dry suit.

For those of you wondering – what???!!! A dry suit is for scuba diving. You might be more familiar with the term wet suit for scuba divers. Dry suits are more popular for cold water scuba diving. Brrrr. Like around here. The dry suit belonged to the deadbeat.

Around that time we sold a bunch of scuba diving equipment, including my pink Body Glove wet suit that I bought in La Jolla, California around 1990. Hadn’t used it in years by the time it was sold.

First offer? I think that’s when somebody has something for sale on eBay that’s not an auction item, but they’ll take bids for it. The first offer winner is an Apple iPad in December 2010. Again, not me. Though I did get one for Christmas that year and now I know where he bought it!

OK, now that I’ve thought about this a little more, I think the eBay glitch is similar to the Amazon glitch.

When Amazon first came on the scene, there was only one: amazon.com

Even though eBay claimed my first purchase was on October 30, 2002, I know that’s wrong. I have a pretty good memory. The company I worked for in the 2000s moved to a new building in a nearby town in the summer of 2002. Good news for me because it was closer to my house!

Anyway, I definitely remember having to use my work computer at the original building when I was bidding on eBay auctions that were ending during work hours. You have to keep an eye on these things because in the last seconds a new bidder will show up to outbid and scoop the item you want.

I’d bought a cute tire cover on eBay to replace a tire cover that got vandalized on my Asuna Sunrunner. I remember driving to work that day at the old building with the vandalized tire cover and laughing about it with my coworker, thinking that I might have offended other drivers! 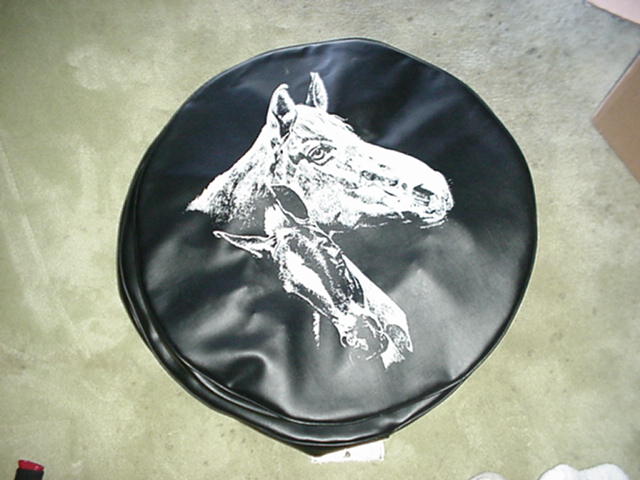 Somebody actually tried to steal my new mare and foal tire cover shortly after I bought it! Fortunately they only tossed it behind the hedge and I got it back.

Anyway, at some point eBay migrated me to eBay Canada which is why they claim my first purchase was in 2002. That might have been my first eBay “Canada” purchase, but I’d bought stuff before using eBay.com.

I’ve not really had any huge problems with eBay. If I make a purchase, I pay right away with PayPal. I think over the years eBay linked with PayPal so the payment transaction can go through simultaneously. Years ago, if I won an auction, I had a set time to pay for the item. A week? I used PayPal if I could. Sometimes I think we sent a check or money order. One time we purchased toner for the printer from a person who lived about 45 minutes away and asked if he’d take cash and we could pick up. He was agreeable.

About 3 years ago I bought a couple of camera lens hoods from two different sellers using the “buy now” feature. They were pretty cheap and included shipping, but all they are is plastic that threads on to the lens to give it shade. One lens hood arrived in a timely manner. The other didn’t show up and the seller wouldn’t respond. He must have thought it was pretty crappy that I spent only $2 for the hood (including shipping) but hey, if that’s the price you set and you’re unhappy later, that’s not my problem.

Anyway, I managed to get a refund from PayPal (seller ignored them too) and left negative feedback on eBay.

eBay is often all about finding things you can’t buy locally. Or that you can buy cheaper. Or vintage and rare, hard to find items. 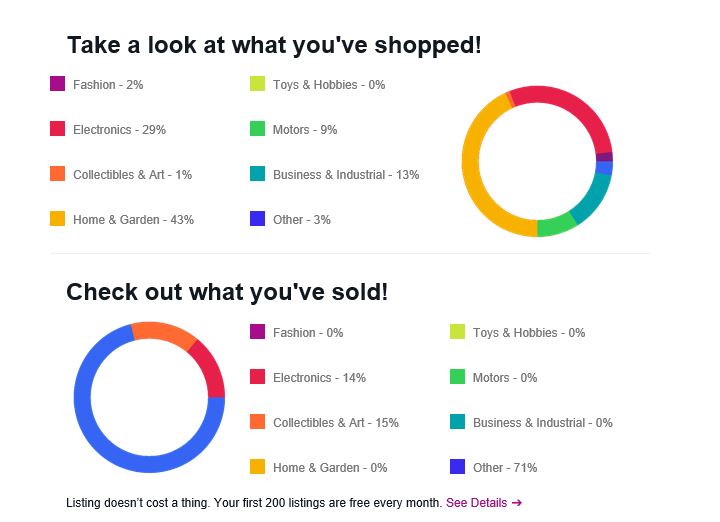 Check out this really cute (or at least cute to me) vest featuring horses and a Scottish theme. 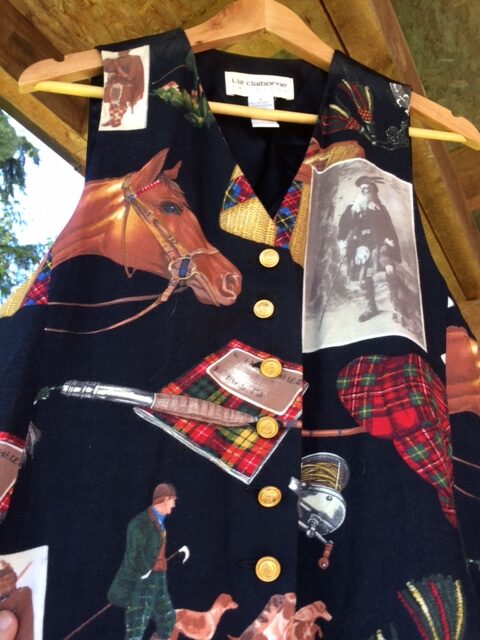 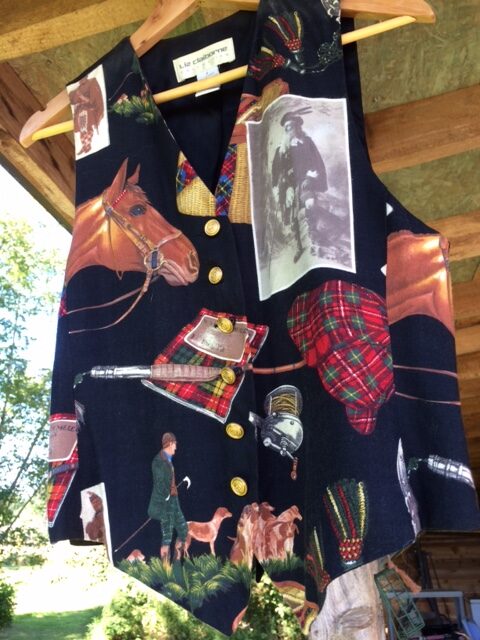 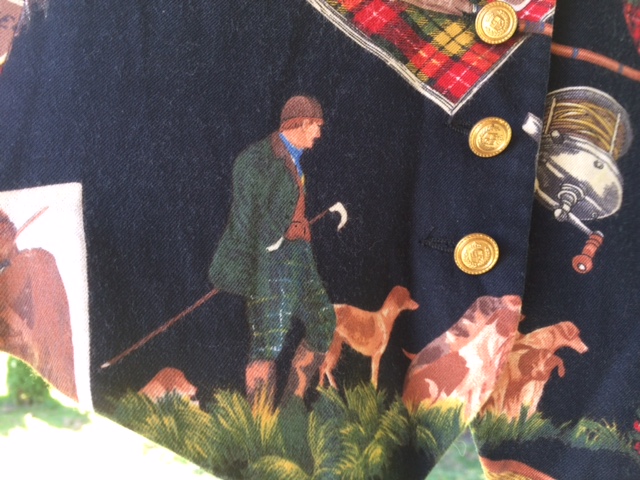 This is a Size 4 Liz Claiborne vest, and was definitely one of those auctions I was bidding on at work in 2002 or earlier. I really wanted it, even though it was too small for me. I’m a bit over-endowed in the chest department, so Size 4 won’t fit. I always wished I could have been a 32A and that would make it easier to ride horses. Or at least less jiggly.

But, oh well. The design was cute and I’d never seen anything like it. I don’t always button up my vests anyway. I can wear a vest unbuttoned.

But… believe it or not. I can fit into the vest buttoned up. A very tight fit. 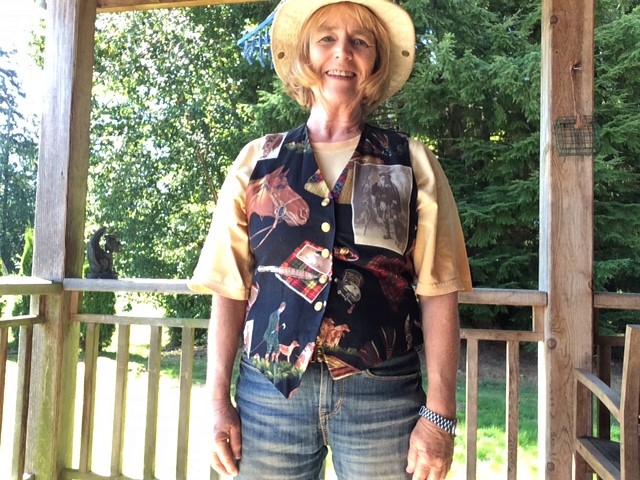 I wouldn’t want to wear it buttoned up for too long or those buttons just might pop off!

You know what’s really crazy? I just peeked on eBay and there’s the exact vest in Size 12 available right now (August 29, 2020). Click the photo below to go to the listing. 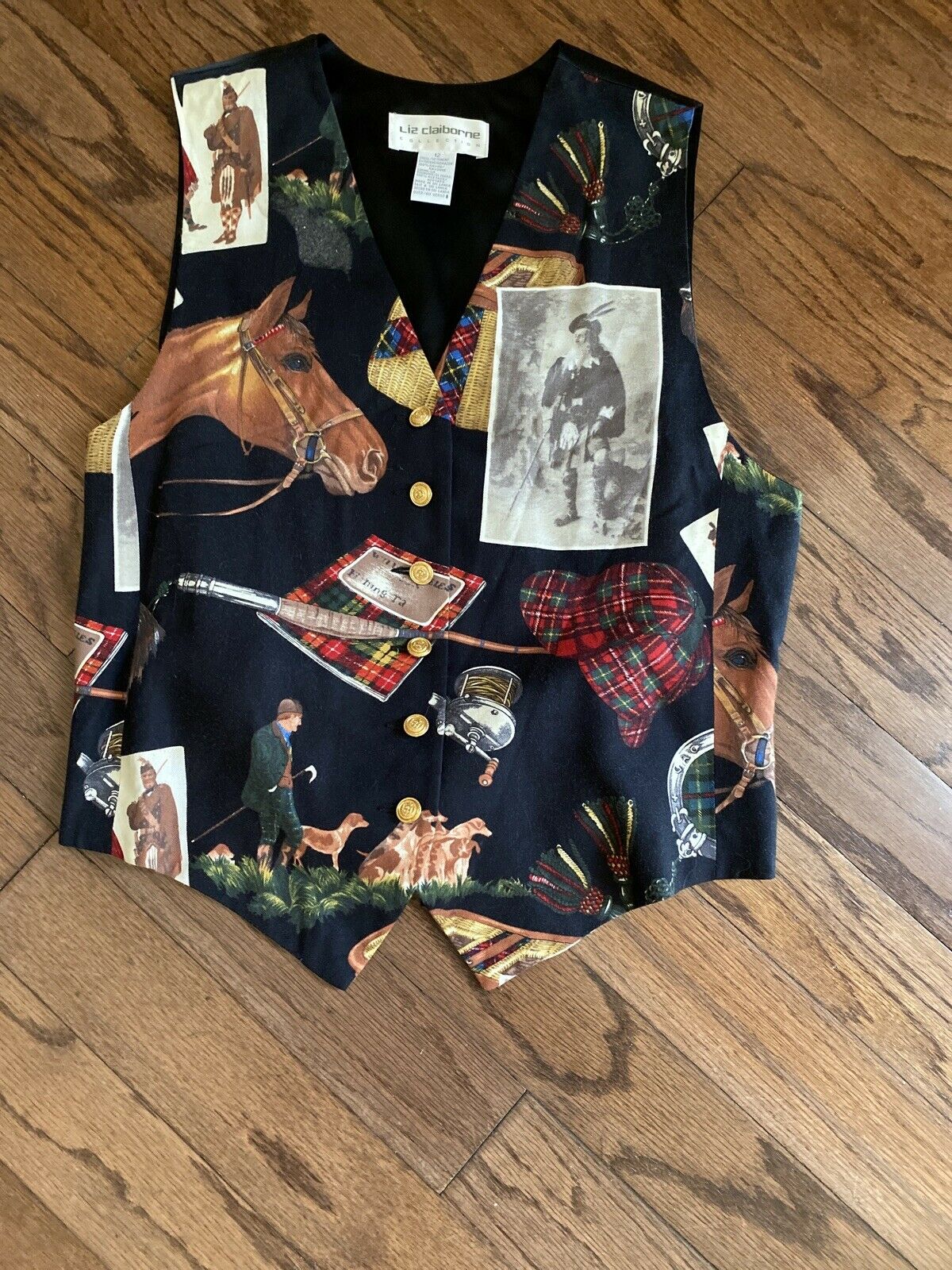 I’m “almost” tempted to buy it using that $25 coupon… Hmmm. How many one-of-a-kind vests do I really need to own?

Here’s another favorite purchase I made from eBay around the same time I bought the Liz Claiborne vest. A lightweight, reversible jacket with a horse theme. The reversible side is a purple pattern, but you can probably guess which side I wear. 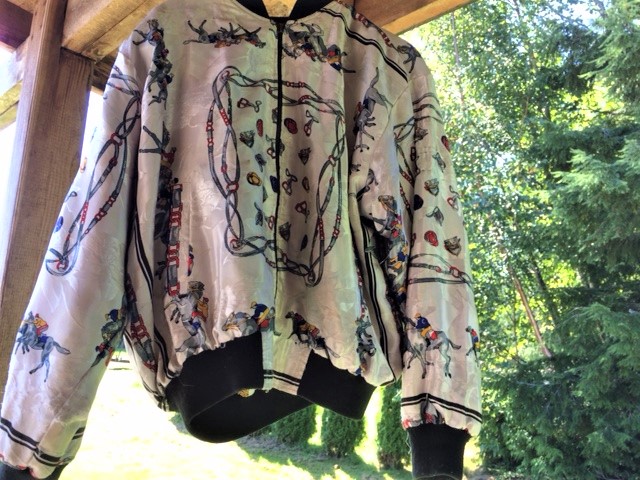 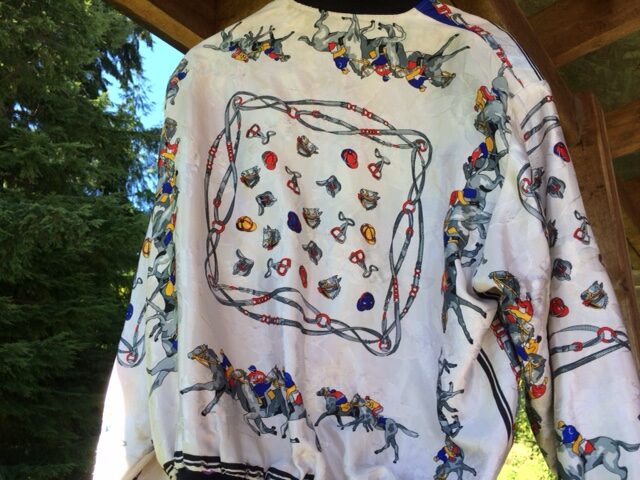 I also didn’t notice how breezy it was outside until I tried to take photos of the jacket and vest hanging from a hook on my sundeck!

Did you get an email from eBay with a $25 coupon? I’m trying to figure out if everyone registered with eBay got a coupon, or if it really was special just for us old-timers.