Cheryl at The Lifestyle DigsNovember 5, 2019November 16, 2019 Health No Comments

All my life I’ve had trouble falling asleep. And even when I fall asleep, I have trouble staying asleep. 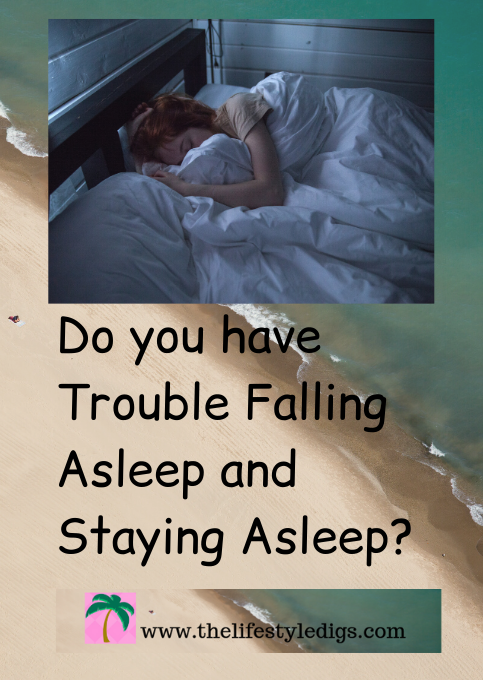 I was the kid who woke up in the middle of the night and stayed awake. Before the age of five I was an expert in rearranging my bedroom furniture because I had nothing else to do. At that age I hadn’t learned to read and I didn’t have a TV in my room. I was strong enough to push my double bed around the room, and I liked pushing it up against the bedroom door to make it difficult for my parents to get inside.

Now that I’m older and can’t sleep, I have other things to occupy myself besides rearranging the bed. Fortunately I learned how to read! Even better with an iPad or Kindle, I don’t need to turn on a light. These days I don’t have a TV in my bedroom even though I have three TV sets. Two of them are in storage and a small TV sits on a table in my living room. So it’s been a few years since I could lie in bed and watch TV. A luxury I enjoy on the rare vacations when I stay in motels.

Who else is having trouble sleeping and waking up too early since we set back the clocks on November 3, 2019?

The time change messes me up for sure. On Sunday morning I woke up at 6am and on Monday, I managed to sleep in a little longer until 6:30am. Today, Tuesday, I was up at 5am, unable to fall back asleep. I have a busy mind, always thinking of stuff, and that prevents me from sleeping.

British Columbia is working towards legislation to scrap time changes. A survey earlier this year had 93% of residents in favor of leaving the clocks alone year round. The BC government is working closely with Washington, Oregon, and California because these states also want to scrap time changes. It makes more sense for all of us who border the Pacific Ocean to stay in the same time zone, but the states have to pass it through Congress first. BC might make the time change move before our neighbors to the south.

That’ll be a big relief. Who else dreads pulling out your car manual for instructions on changing the car’s clock?

Disclosure: this post contains affiliate links. If you click and make a purchase, I’ll receive a small commission for the referral.

A big issue that prevents me from sleeping are noises. It’s not like I hear strange noises that make me scared. The noises I hear, I know what they are. The hissing of the hot water tank. The clicking from the furnace. A dog’s toenails as it walks across the kitchen floor. People laughing and talking as they walk down the street. Traffic noises. An airplane. A barking dog. A howling coyote. An owl. Frogs.

Trust me. When I hear a noise I can focus in pretty quickly on what it is, and it’ll keep me awake.

I’ve had a nuisance alarm go off on my smoke and carbon monoxide detector. That means I have to get up and double check everything to ensure it’s a false alarm. Very annoying.

Especially since once I’m up – I’m up. It could be two or three in the morning and I won’t get back to sleep again.

When I was eighteen I lived in a dormitory at the University of Victoria. Now that’s noisy! This was when I first started using ear plugs.

I’ve tried many earplugs over the years. They come in all levels of comfort, and trust me the ones I could get my hands on in the drugstore in the seventies were not comfy. They were usually swimmer’s earplugs, so kind of a hard rubber thing.

Sometimes they broke apart in my ear!

Too many times I could feel those earplugs gouging me as I lay on my pillow.

I tried various foam earplugs that showed up in the eighties. They were more comfortable, but I still wasn’t having much luck at finding earplugs that could eliminate most of the noise.

And then I finally found them. Green foam earplugs and I think they had a picture of an alligator on the box. I bought them at an industrial supply store and I think there was 500 earplugs in the box so it lasted me for years. Usually I can wear the same earplugs for a couple of weeks. Eventually they get dirty or less effective or one of them goes missing.

Yeah how does that happen?

Earplugs roll off the nightstand and under the bed. They get tangled in the sheets. The dog eats them.

My current box of earplugs has 200 pairs, and it still lasts a long time.

The brand I use is called Moldex Pura Fit 6800. I’m not sure if they evolved from the alligator on the box brand. They’re very comfortable to wear and they block a lot of noise. However, if something is loud enough, I will hear it.

These earplugs come in smaller boxes if you don’t want to commit to several years supply.

You can also go into an industrial supply store and ask if they sell the packs individually. Try them out for size first before investing in a box. If you know anyone who works in a warehouse that requires hearing protection, maybe they can score you a pair of earplugs to try out.

A few years ago I found a natural product called AdrenaSmart that is manufactured near where I live. Lorna Vanderhaeghe (not an affiliate) is a nutritionist from Burnaby, BC and developed a line of natural products for women. As she’s expanded through the years, many of the products can also be used by men.

Though I wouldn’t recommend the guys using the products to help with menopause symptoms!

The idea behind AdrenaSmart is that our adrenal glands aren’t shutting down properly. Two tablets are taken around lunch time and this gives the body enough time to shut down and fall asleep when you go to bed. And helps you stay asleep. The first day I took AdrenaSmart, I probably fell asleep within minutes of getting into bed. And stayed asleep all night long. Over the course of taking the product, when I woke up in the night I usually fell asleep again. There might have one or two nights in a month where I stayed awake, but that was a huge improvement for me.

After a couple of years, I stopped taking AdrenaSmart to try something else.

The Smart products aren’t showing on Amazon.com, but can be purchased from Amazon Canada.

I buy my supplements from a company in Alberta called Vitamart (not an affiliate). I do comparison shopping and they have the best prices in Canada that I’ve found, both online and in stores. If you’re in Canada, they offer free shipping if you buy a minimum of $49. They do ship to the states, free shipping after $149, or if your order is less than that, a flat rate of $14.95. You’d have to check with them but I think they charge you in Canadian dollars. I just don’t think Canadian merchants are set up with credit card machines in other currencies, but I could be wrong. Phone or email them first to double check before placing an order. The exchange rate is great anyway!

A three month’s supply of AdrenaSmart (a bottle of 180 tablets) costs around $45. For a good night’s sleep costing $15/month it’s well worth it!

I decided to take a break from AdrenaSmart and bought Jamieson Melatonin in the chocolate mint dissolving tablet. It has that medicinal mint chalk taste too it. That doesn’t bother me, but some people might not like it.

This is another Canadian brand that doesn’t seem to be selling on Amazon.com. Though it is available on Amazon Canada. You can also buy it at Vitamart. In fact it’s a buck cheaper than Amazon’s price!

If I’m in bed and still awake at midnight, I’ll take a Melatonin and be asleep in 20 minutes. It’s usually pretty decent at keeping me asleep too.

I’m taking one for sure tonight to try to get a good sleep!

It costs around $10 for 100 tablets. I take them as needed. If I’m really wide awake by 11pm, I’ll probably take one before brushing my teeth and heading to bed.

On the web page for Celestial Seasonings, they say they’re in Boulder, Colorado. I checked out Amazon for their Sleepytime Tea and it’s like $15 plus shipping! Yikes!

This product should not cost you more than $5 in the grocery store. Get yourself to Walmart!

This tea smells really nice and has chamomile and mint to help relax you and fall asleep. However, drinking anything before going to bed creates a whole other problem. You wake up a few hours later to go potty, and then it’s another story trying to fall asleep again.

If I’m planning to drink Sleepytime, I try to take it no later than 9pm. I don’t need to wake up in the middle of the night!

So there it is. Earplugs and a supplement to help me fall asleep. If you’re in the same boat and have trouble falling asleep and staying asleep, try Jamieson Melatonin and if that doesn’t bring relief, AdrenaSmart will probably give you a good night’s sleep.

Everyone has a different body make up. What works for one person might have zero results for someone else. Maybe one of my suggestions will work for you.