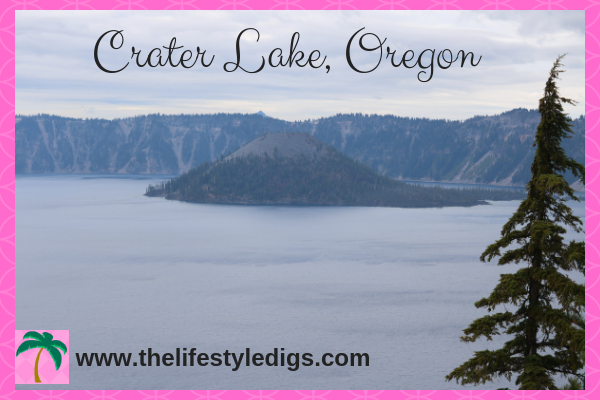 After a night in Crescent City, California, the next stop was Crater Lake, Oregon. I’ve seen the signs for Crater Lake many times while driving back and forth to California, but I’ve never stopped.

My Oregon getaway was definitely including a visit to Crater Lake!

I set my GPS and away I drove along Highway 199 through redwood forests that at times wound along beside a river. I passed through tiny towns with diners that looked like they’d serve big meals.

I had one of the oddest things go wrong with my car shortly after leaving Crescent City. The weather was pretty good and I kept the back windows down for the dogs to enjoy the fresh air. It also beats listening to hot, panting dogs coming from the back seat! To counteract the drag from the down windows I also kept the sunroof open. Depending on the speed limit, it might be too breezy and noisy keeping the windows and sunroof open, and other times, like early in the morning, it’s too chilly, and up they’d go.

The driver’s side door of my Mazda 3 has the window controls for the entire car. Ever since Crescent City, I’d been driving with the back windows down, but I rolled them up. Then I had the oddest sensation like a window wasn’t completely up or one of the car doors wasn’t completely closed, but my control panel wasn’t alerting me to an open door. Again, I put my fingers on the back seat windows in the up position for a few seconds to make sure they were all the way up. The drag was still there. Eventually I realized the window in the back passenger seat behind my driver’s seat was still down. I put my finger on the control to make it go up. And … nothing.

Great. What if I need a mechanic? I’m kind of out in nowhere, no big cities until Grants Pass, still a couple of hours ahead. I can’t just park my car and leave it unattended with a window rolled down and all my stuff inside.

I pulled the car over, opened up the back door, put my finger on the up switch and the window rolled up. I put my finger on it to roll it down and down it went. I rolled it up again. Then I went back to the driver’s seat control and rolled it down. All good. I pushed the back window into the up position. It didn’t move up.

I got out again, opened the back door, and rolled the window up from there. At least I’d solved the immediate problem. For the rest of the trip I left that window alone!

After a couple of hours I arrived in Grants Pass, Oregon which is on Interstate 5. When I got back on I-5 I was driving south again. Yes! Heading back towards California! I love California. I’d have kept heading south if I’d planned more time away from home.

After about 15 miles the sign for Crater Lake (not to mention the GPS) pointed me in the direction of Gold Hill where I’d originally thought about doing the Oregon Vortex. I had that on my GPS too but I changed my mind. I don’t really regret it. Of all the days on my journey, this was the most tiring for me. Perhaps that HOT room at the Motel 6 in Crescent City did me in.

It was about another two hour drive to the Crater Lake entrance. Actually I may have missed another entrance on the south side of the national park. I saw the sign at the last minute, but my GPS had me continuing on to the north entrance. And that was probably a good thing because if I’d started the rim drive at the south, I’d have probably knocked off when I got to the halfway point and exited at the north entrance to continue on to Bend. 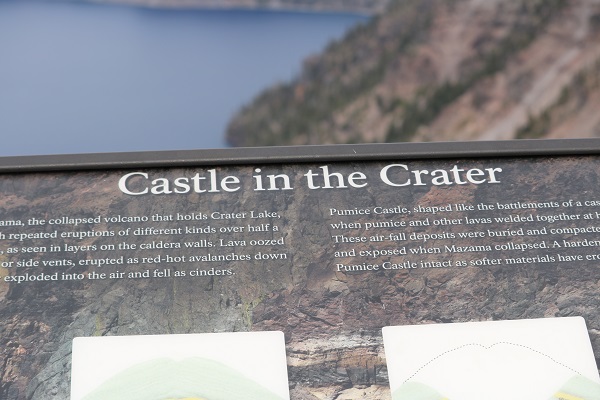 I finally arrived at the north entrance to Crater Lake and there was a car in front of me at the booth to buy a pass, that I think was around $25. The car in front of me took no time at all so when I pulled up to the booth I told the ranger I was still fishing out my Mastercard.

“Today is free,” he said, and handed me a brochure.

I figured out later it was National Public Land Day and admission is free to all national parks on the fourth Saturday in September. It was just a coincidence that was the day I arrived at Crater Lake. I hadn’t planned it.

This has happened to me once before in 2012 on a Hawaiian cruise. We were at the Big Island and rented a car to drive up to Volcano National Park. Completely unknown to me, it was free admission. As luck would have it the Big Island of Hawaii was that day on the itinerary. 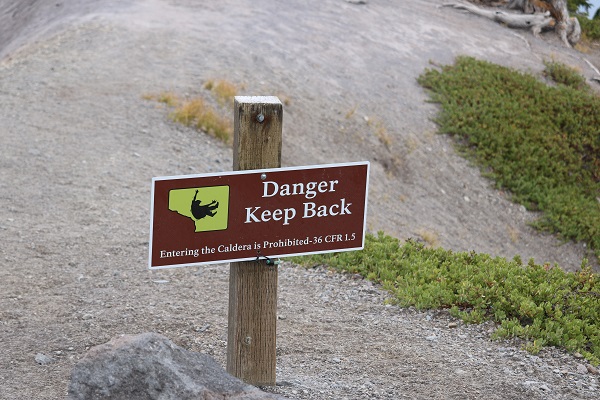 As I drove along the highway towards the crater rim loop road, it became very clear that Crater Lake National Park had fallen victim to forest fires. There were many burnt out trees giving the landscape a barren, eerie look.

I arrived at the first parking lot that would give a view of Crater Lake and it was packed so I kept on driving. According to the map, there are several parking lots off the loop road. It didn’t take me long to find a less crowded parking lot to get my first glimpse of Crater Lake. Massive! 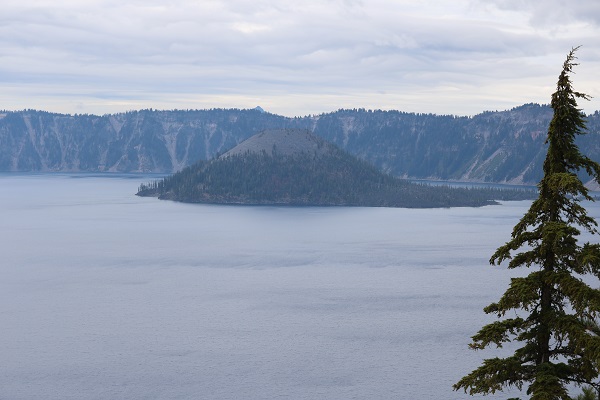 I took the crater rim drive the entire way around, stopping occasionally for scenic viewpoints, and munching on my Trader Joe’s pumpkin and chocolate granola bars. There is nowhere to buy lunch in the park. 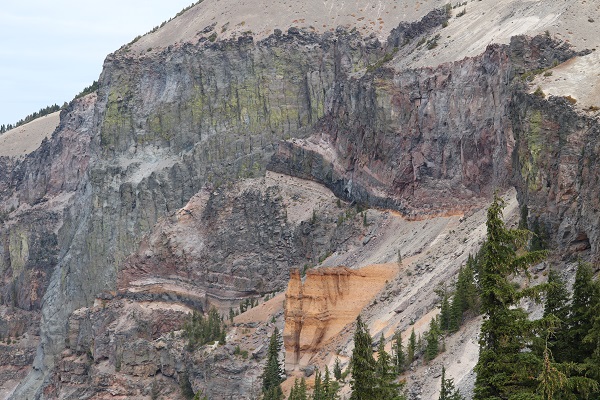 There are some colorful rock formations around Crater Lake. If you’ve been to the Grand Canyon, Waimea Canyon (Kauai) or the Painted Canyon (British Columbia) the colors are similar, like a giant paintbrush created them. 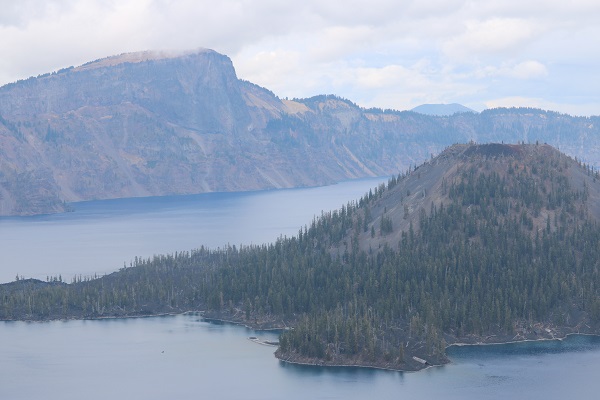 Crater Lake was the first time I got rain on my Oregon getaway which is why some of the photos look a little misty. I tried to stop at the souvenir place and spend some money seeing as how I’d got into the park for free, but the parking lot was jammed pack full. I spent 10 minutes in a slow moving long line of cars also searching for parking before I finally was able to exit. I stopped at one or two more scenic viewpoints before I made my way out the same way I came in. 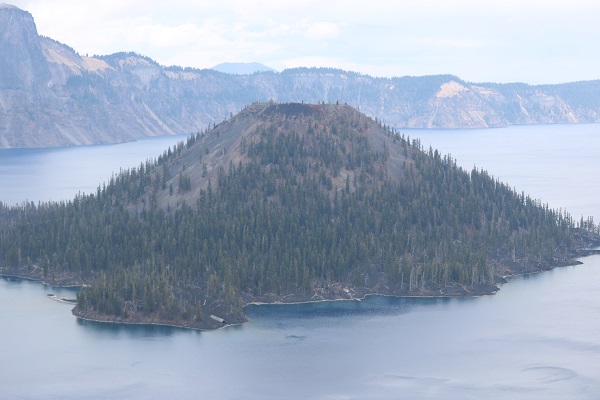 For more information on Crater Lake, click here to go to the National Park’s website. It is either closed or partially closed during the winter months, depending on snow.

Next stop Bend where I’d reserved two nights at the Motel 6, about a two hour drive from Crater Lake.

This was the only time on my trip that I wished I had someone else along with me to help out on the driving. I guess it had been a long day and I was becoming increasingly tired and Bend was still a 45 minute drive ahead of me as I was starting to lose steam.

Check out my video of some of the scenery through the redwood forests and then around Crater Lake.

One thought on “Crater Lake, Oregon”