Skip to content
Cheryl at The Lifestyle DigsJune 9, 2019 Recipes No Comments 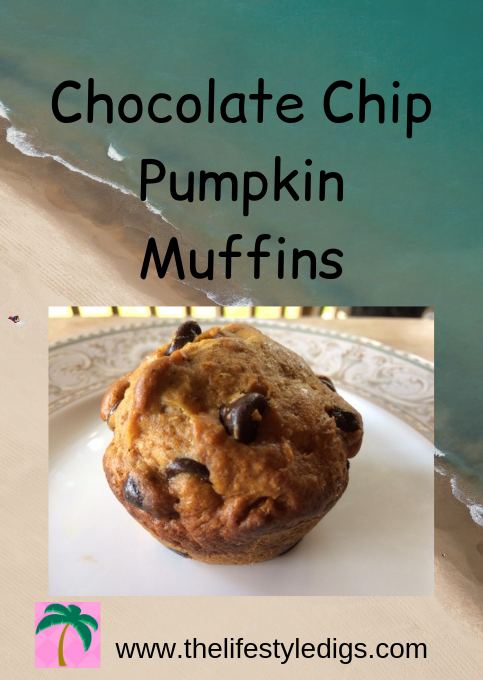 Oh how I love baked goodies! How about you?

Chocolate chip pumpkin muffins are my favorite! Or at least my favorite that are easy to bake and freeze well…. 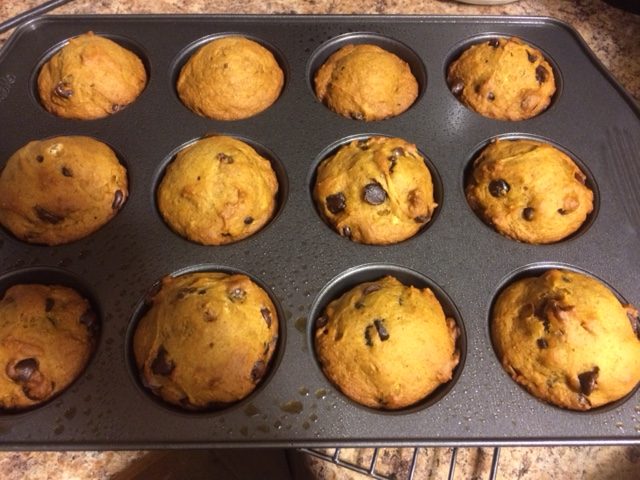 I often have a muffin for breakfast if I’m making a smoothie. Or when I’m eating yogurt or cottage cheese with fruit for my meal, I’ll usually add a muffin.

Anytime when I’m hungry is a good time for a chocolate chip pumpkin muffin!

My recipe makes two dozen muffins, so I freeze most of the batch. Sometimes I’ll give half the batch away, but generally I eat one chocolate chip pumpkin muffin shortly after baking – taste test! – wrap another one in plastic wrap for next day’s breakfast, and the rest hit the freezer bags. 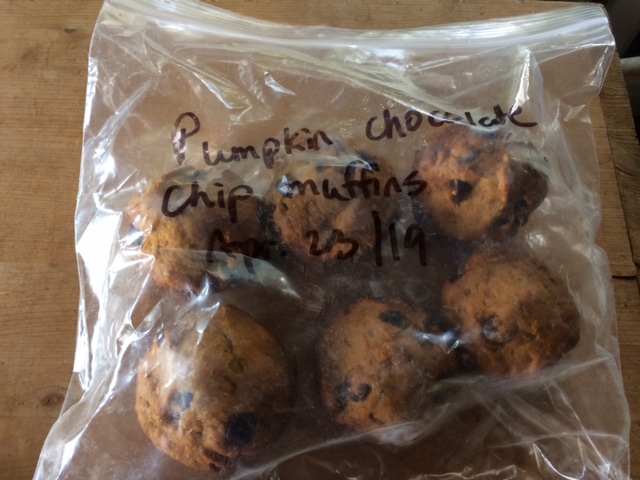 Pumpkin is so filling. The chocolate chip pumpkin muffin keeps me going for at least two or three hours before I start feeling hungry again. And chocolate chips? Need I say more? I’m a chocoholic!

Let’s talk eggs. The recipe calls for four of them. I’m not a vegan and I often have eggs in the fridge that I’ll add to the batter when I bake chocolate chip pumpkin muffins. However, I tend to go on and off eggs and right now I’m off. I keep egg substitutes in the house for baking, whether or not I’m “on” with eggs.

What are egg substitutes? The ones I keep in my cupboard are ground flax and Bob’s Red Mill Egg Replacer. Bob’s Red Mill is in Oregon. You should be able to find it in the grocery store cheaper than what Amazon sells it for. Costs about $5. One tablespoon of egg replacer plus two tablespoons water = 1 egg. Substitute that is. You can’t scramble these!

It’s the same ratio if you’re using ground flax seed. And about the same price. 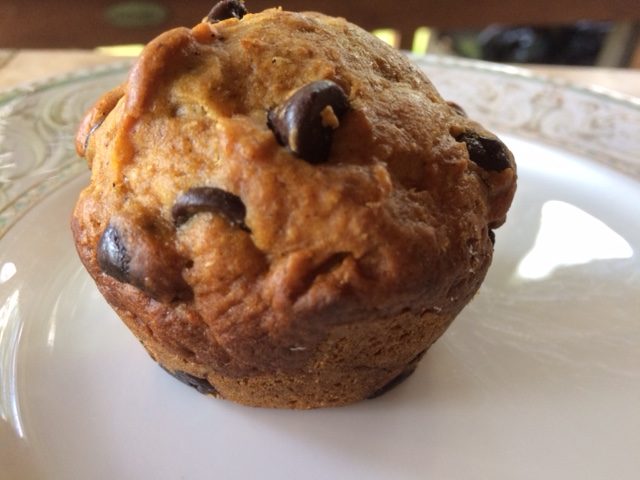 As I already said, usually I use eggs, but the last time I baked the chocolate chip pumpkin muffins, I used Bob’s Red Mill Egg Replacer and I really didn’t notice a difference from using regular eggs.

Of course, the benefit of keeping egg substitutes in the cupboard is they last a whole lot longer than the eggs in the fridge! They’re more cost effective than using real eggs.

The other thing I want to talk about is sugar. Mainly, because the doc says I need to be keeping my blood sugar under control. The recipe calls for 1 cup of both white and brown sugar. That sounds like a lot of sugar so I try to cut back to just under a cup of each. Often I use 2 cups white sugar because I don’t have enough brown, or the brown sugar turned into a solid mass. It’s just personal preference. The calorie count will seem high too. There’s about 70 calories just from sugar alone in each muffin. However, so far I haven’t found a sugar substitute that I like enough for baking. They just have that blech artificial taste and I end up throwing away my baking.

And away we go. Here’s the recipe. Enjoy!

Mix the above ingredients together until it begins to look and have the consistency of butterscotch pudding. Add:

Mix it pretty good. Then I put the following into a measuring cup:

Add it to the pumpkin mix until just blended.

2 cups chocolate chips (I use semi-sweet)

Stir to distribute the chocolate chips evenly throughout the batter, but don’t over mix.

Use a spoon to pour the batter into the muffin trays. It will be thick, not runny. Put in the oven and set the timer for 15 minutes. When the buzzer goes off, use a toothpick to test if it’s done. If not, I turn the pans around and put them onto the opposite side of the oven they baked on and give it another 3 minutes. When I test them again, they’re usually ready.

Put them on a cooling rack. After a couple of minutes I use a spoon to tip the muffins on their sides to allow steam to escape. When they’re not too hot to touch, I take them out of the muffin pans and put them on cooling racks. If I remember. Don’t worry if you miss that step! They can cool quite nicely in the muffin pans. 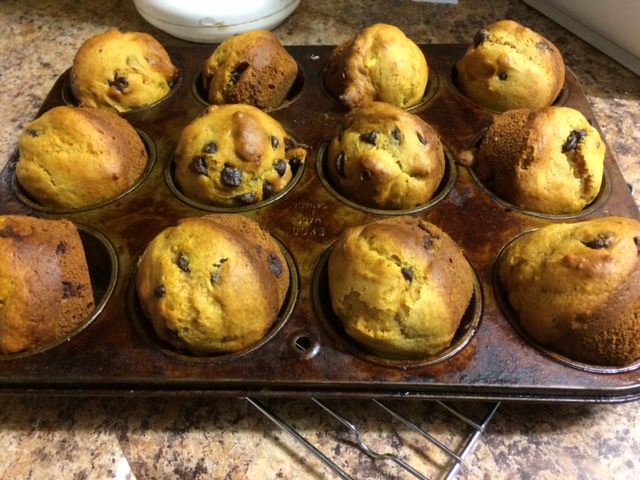