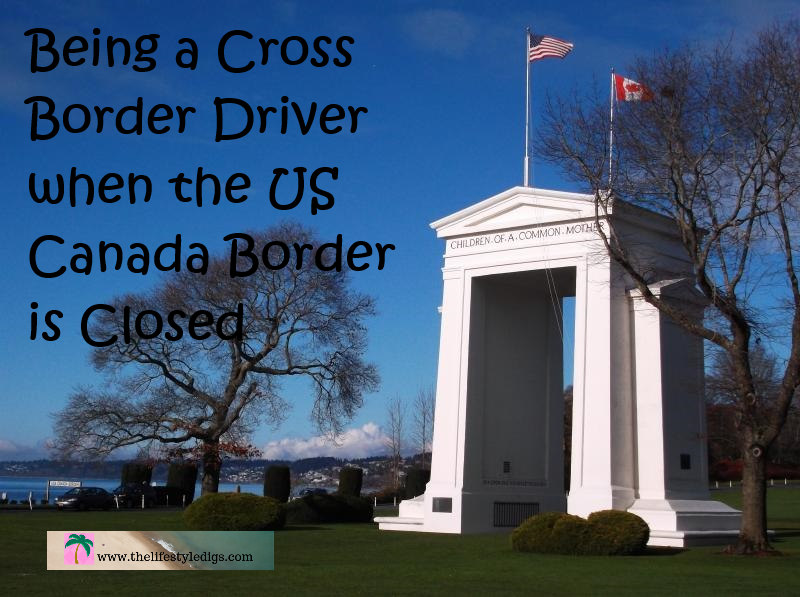 I began working for a company in March that imports pick up trucks from Canada into America. My position is a driver. I drive the trucks from Surrey, British Columbia to Ferndale, Washington, about a 15 mile drive.

When importing pick up trucks, the drivers go through the commercial crossing with the large semi trucks.

On March 19, 2020 the American and Canadian governments decided to close the land border for vehicle traffic between the two countries which would go into effect the following day. Well, actually night. On March 20, around 9pm or so, the borders shut down to non-essential travel. Though for the first part of March it was pretty quiet at the borders as coronavirus cases were on the rise and people stayed at home.

With the borders closed, I was essentially out of work.

Thank goodness for the CERB which provided income during this time. I couldn’t even find work anywhere else. No one was hiring. Companies shut down, at least temporarily, taking on a wait and see attitude.

The commercial crossing at the border never closed. Goods still moved between the US and Canada. We would still be able to cross trucks into Washington, but the problem was with the Canadian government’s rules for people returning home.

How stupid is that? We drive a truck down and park it in a lot, and then get into the chaser vehicle to come back to Canada. We are not mingling with anyone in Washington except the border guards, where we can keep a safe distance. It’s obviously not sustainable to get paid for two hours work, come back to Canada, and be quarantined at home for two weeks.

The company hired vehicle haulers to pick up the trucks and transport them to the Ferndale lot. That cost them a lot of money. It also cost us drivers income.

Then sometime in May, the manager of the Ferndale lot, a dual US/Canada citizen who lives in BC, was able to cross the border and come back to Canada later in the day and not be quarantined because he was out of the country less that 24 hours. A few phone calls to customs and our office decided to get the drivers back to work.

The next step from our manager was to find out which drivers were willing to drive pick up trucks down to Washington.

So now we had to test out the waters. On Monday, June 8, 2020, myself and two other drivers hopped into pick up trucks and headed for the commercial crossing.

It actually went very smoothly. Not too different than how it’d been before coronavirus shut things down.

We got in the commercial line and it took us about an hour to get up to the booth. After we cleared that, we parked and went to the dock with our paperwork. The border customs staff do a VIN check on the vehicle, stamp the paperwork, and then we can leave. The VIN check can take a few minutes wait if there’s no one else there, or we can be stuck there an hour or more, depending on how busy it is.

Stranded in the good old USA?

While the three of us were together at the border customs dock, we got word that the person driving the chase vehicle had been denied entry into the United States!

So we found that kind of funny, joking about trying to hire an Uber to pick us up at the parking lot and drive us back to Canada.

Actually we weren’t too worried. Our manager, who’s been coming down daily, sent a text he was on his way to give us a lift back to B.C.

When the manager arrived he said that would be it for the day because he was heading home and didn’t want to wait a couple more hours for us to bring more trucks down. He said we’d try again the next day. The next run I’d be the chase driver and go through the commercial crossing with our other pick up trucks. The consensus being an older woman might have better luck crossing than a younger male (the chase driver who’d been turned back).

When coming back into Canada, there is only one lane open at the border. We got asked the usual questions like are we bringing back any booze and cigarettes, but the border guards are also asking us how we’re feeling. Any coughs? Any fever? We were also given a brochure listing the symptoms of Covid-19 and explaining how some people are exempt from the two week quarantine. That includes workers who are out of Canada for less than 24 hours.

As we get back onto 176th Street in Surrey, just after leaving customs, the road is barricaded and we’re directed into a lane to speak with Covid staff who’ve got a tent set up to do coronavirus screening. They’re not testing us, just asking questions.

The last time I saw them was on June 19, so whoever was funding them has either pulled the funds or relocated the staff.

The next day four drivers were importing pick up trucks plus me in the middle of them driving the chaser vehicle, which is just one of the other trucks that’s not ready to be imported.

I had no trouble getting through the commercial crossing, except I had to pay $13.40.

Well, at least that’s cheaper for the company than hiring a transporter truck. And yes, they cover our expenses.

When I arrived at the Ferndale lot I told the manager about the $13.40 fee and he was annoyed. I suggested I try the regular car crossing the next time because they have one lane open. Worse case scenario, they’d turn me back. And then I knew I could just go through commercial again and pay another $13.40. He agreed to give that a try.

The next run, the four drivers went through commercial and I headed for the regular crossing. It took me about a minute. No problems! I’m in Washington!

So we did it a third time!

I’m a little foggy on the rest of the week, how many trucks crossed into Washington, and I can’t remember if I was the chase driver the next time or not.

I was back to driving the pick ups being imported and our scheduler took over the chase vehicle.

He got pulled aside for secondary screening at the US border, but after 45 minutes they allowed him to continue south.

It was like that every time for him. He got pulled over into secondary screening.

They decided to put me back as the chase driver.

Yikes! I ran into trouble. On my first run, I got pulled into secondary. After about 15 minutes I was sent on my way.

On my second run, the border guard just waved me through when he learned I was a chase driver.

On the third and fourth runs, I got asked a lot of questions by the border guards, but was allowed to proceed  after a few minutes without going to secondary.

The problem seems to be the truck with the dealer plates on it. This was never a problem pre-coronavirus. Now it is. Or else the border guards just want something to hassle us about. Anyway, not cost effective for the company to insure and put hard plates on it, but they had to do it. My favorite Longhorn has now become the permanent (at least for now) chase vehicle. 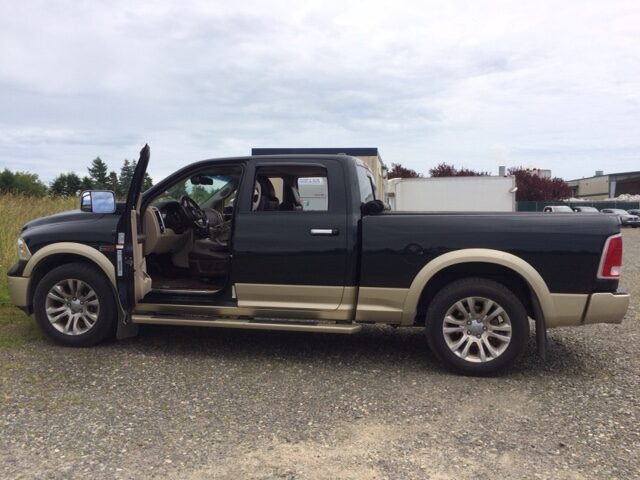 Those regular license plates did the trick. I whip through the border no problem now. Especially with the guards who recognize me. “Oh yeah, you’re the chase driver.”

I was the chase driver for a week without any problems.

Our scheduler also drove the chase a few trips without issues.

So the good news is, we’ve been very busy. I’ve been working nearly daily.

The sort of bad news is that I’m not eligible for the $2000/month CERB starting in July, which would have been my fourth month of collecting it. The government lets us collect it if we’re working reduced hours with less than $1000/month income.

I’d rather be working than collecting the CERB anyway.

So right now, things are looking up as we get back to moving those pick up trucks into the states.

Fingers crossed it stays that way. Washington state is having a huge problem getting the coronavirus under control. Hundreds of new cases daily. Everyone is nervous. 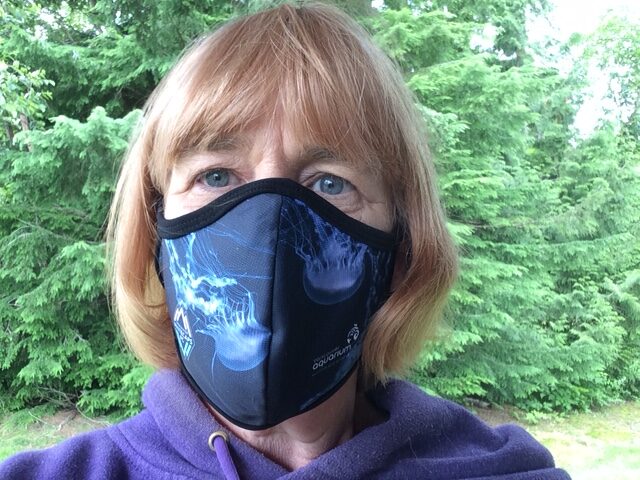 Here I am on YouTube chatting more about my cross border driving. 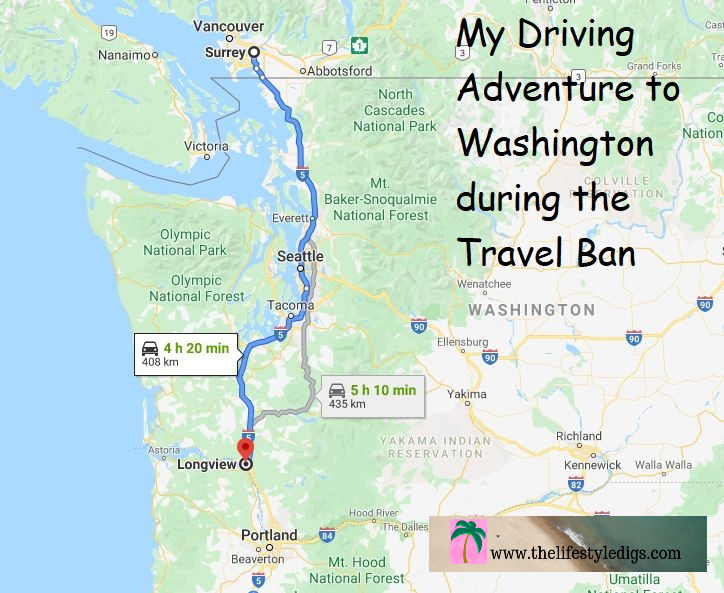