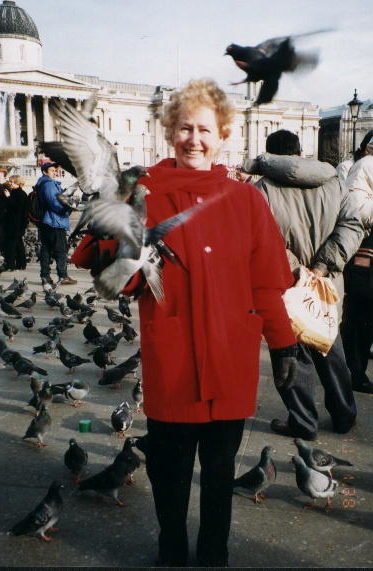 My mother always had a rotten memory. When I was younger she would buy candies, books, and other treats and hide them. She didn’t want us to locate the treats before she was ready to give them to us but she never remembered her hiding spot. I found Halloween fireworks stashed in the back of a cupboard in the den in the middle of the following winter. When I was eleven and travelling to England, Mother bought me a book to read on the plane and hid it somewhere but couldn’t remember where she’d put it. At age sixteen we moved to a new house and the book, Mr. Toad’s Tales, was unearthed, with me now too old to be interested in reading it. Mother was forever misplacing her keys and glasses. She used to bribe me $1 to find her missing object. After a while the $1 was not adequate for the time invested in the search, and I would decline her generous offer.

One of my mother’s habits used to drive me crazy. She would start talking to me and cut off speaking mid-sentence, usually before the critical part. She would say: “Can you go to the kitchen and get me the…” I would hop around from one foot to the other begging her to spit the rest of the sentence out. She claimed I made her too nervous to remember the rest of the sentence.

As the years passed Mother’s memory slowly worsened, but as she was nearing seventy years old we just wrote it off as memory loss attributed to aging. She continued to hide things and forget where they were. Increasingly she was unable to complete a sentence. She became repetitive, asking us the same question or repeating the same story within a short period of time. We suspected some hearing loss because she complained that the rest of us mumbled all the time. Her hearing was checked and there was a 25% hearing loss in each ear. My father bought her a top of the line hearing aid, which she refused to wear. We dismissed her times of confusion to being unable to hear us answer her questions.

Within a couple of years we could see significant memory loss and confusion surrounding common tasks such as banking, cooking, and housework. She forgot names of people she had known for years, and forgot places where she had lived or traveled to. Her brother, a retired doctor from England, came out for a visit in 1995 and sensed there was a problem. A few months later Mother traveled to England to visit him and during this visit my uncle and a cousin, who is a neurologist, gave her a mini-cognitive test commonly used to diagnose the presence of Alzheimer’s disease. Their living room diagnosis was that Mother was in the early stages of the disease.

At this time there is no ultimate test to conclusively determine Alzheimer’s disease. It can only be diagnosed through an autopsy once the patient has passed away. Doctors go through a process of elimination with the patient. Tests are taken to check for the presence of other diseases, and once everything else is ruled out the remaining prognosis is generally Alzheimer’s. Mother began visiting a series of doctors and blood tests and CT scans were taken. All the results indicated my mother was in good health, but sadly we watched her slip deeper into confusion and memory loss.

A mini-cognitive test consists of 30 questions that should be answered quickly by persons with normal memory. Some of the questions are naming the day of the week, the date, the city, state, and country. The doctors administering the psychological tests also concluded Mother was in the early stages of Alzheimer’s disease. My father retired from his job and became a full-time caregiver taking over the cooking and other household chores.

In early 1997 there was a controlled program that Father wanted my mother to participate in, a test study with a new medication for Alzheimer’s patients. My parents met with the doctors and psychiatrists and it was concluded she would be a good subject for the study. Unfortunately, Mother refused to have anything to do with it and became upset when the subject was brought up. As far as she was concerned she was in perfect health and there was nothing wrong with her. Denial of health problems is a common symptom in Alzheimer’s patients. Eventually my mother did agree to participate in the study, but unfortunately all the spaces had been filled.

Persevering, we learned of a new study coming up in May of 1997, a six-month test period involving several hundred Alzheimer’s patients. My mother was chosen as one of the patients to test a new drug called Galantamine (also known as Reminyl) that is expected to stabilize a person with Alzheimer’s disease and return some logical skills. It was a double-blind study; neither the patients nor the doctors knew who was on the placebo and who was taking the real drug. After six months all persons in the study would be given the real drug regardless of what they had previously been receiving. We were positive my mother was taking the placebo. We did not notice any signs of improvement; in fact, her mini-cognitive test scores became worse, dropping to an all-time low of 15 out of 30 in November, 1997. There was also a decline in personal hygiene. She wore the same clothes every day and stopped brushing her teeth and taking baths unless she was reminded. This was the sixth month and at this time she began to take the real Galantamine and exhibited side effects of the real drug, namely nausea. The doctor prescribed an anti-nausea medication, and after a couple of weeks her body became used to the Galantamine and we were able to discontinue the anti-nausea medicine.

I accompanied my mother on a trip to England in January of 1998. Part of the reason was to give my father a vacation from caregiving duties and also, we thought this might be the last time Mother could visit England and still recognize her relatives. A mini-cognitive test taken the day before our trip showed a slight increase in her score to 17 out of 30.

During our holiday in England Mother was able to remember her brother and sister and their respective spouses, but the names of my cousins and their relationship to us meant nothing to her. Throughout our vacation, Mother began showing some improvement in her hygiene, bathing and brushing her teeth regularly, though she still preferred to wear the same clothes each day. Another mini-cognitive test after our trip showed an improvement in her score to 20 out of 30. We felt encouraged; the experimental drug was having a positive effect.

Unfortunately, this only lasted a few weeks. Mother began to retreat into a lack of personal hygiene, refusal to bathe and brush her teeth, change her underwear or clothes, and sleep in the same outfits she wore during the day. She would get into terrible rages of temper, swearing and screaming and being uncontrollable, again symptoms common to an Alzheimer’s patient. As we neared the six-month period of the real Galantamine, and the one year anniversary of entering the program, my father decided to remove Mother from the study. He was hopeful that by taking her off the drug the mood swings would lessen. I knew mood swings were consistent with Alzheimer’s disease and could continue without the experimental drug. Even if the drug did not help Mother, perhaps what the doctors learned in studying her would help someone else suffering from this terrible disease in the future.

On the day of the one-year checkup, a complete physical and mini-cognitive test was done. After consultation with the doctors, Father decided to continue the treatment. Mother’s mini-cognitive test had fallen to 17 out of 30 again, but the doctors were convinced there was some benefit for continuation of the drug. She was still able to play the piano and play tennis, which may not have been possible without the drug. The doctors also prescribed a mild sedative for daily usage and that controlled her rages.

It was at the weekend respite center in late August of 1998 that we had a major setback in Mother’s condition. She suffered a stroke, lost the use of her right arm and leg, and became confined to a wheelchair.

Mother was already on a waiting list for a permanent intermediate care home and after the stroke we changed our first choice to an extended care home that handles patients in wheelchairs. After two months in the hospital she was transferred to a full care residence. After consulting with the family doctor, Father made the decision to remove Mother from the Galantamine study.

Although Mother regained limited use of her right arm and hand, she was unable to walk, and rarely talked. When she did speak, mostly it was unintelligible. She was in a very good residence with plenty of activities for the seniors and didn’t appear to be unhappy. She was happy to have visitors, but didn’t recognize us by name and seemed oblivious whether we were there or not.

Alzheimer’s disease is a horrible demon for both the patient and the family to bear. The hard truth is the patient will only become worse and it is heart wrenching for loved ones to watch a family member sink deeper and deeper into the black hole of dementia with no chance of a return to normalcy. The life expectancy of a person with Alzheimer’s disease is up to ten years, but the patient can succumb to other illnesses or conditions. Mother passed away on October 12, 2005, approximately ten years after being diagnosed. The sad reality is this disease kills the patient many years before their actual demise, and the mother I knew left me a long time before she physically passed from this earth.

For more information about Alzheimer’s Disease and assistance contact: The Alzheimer’s Association that has a 24 hour help line http://www.alz.org/

To read more about my mother, I compiled her recipes into a cookbook, included stories about how Alzheimer’s took over our lives, and tips for caregivers. You can order a Kindle copy from Amazon for .99¢ by clicking the link below. Note: if you purchase from Amazon, I will receive a commission for the sale.

For my Canadian readers, you can access the Amazon.ca site below, also .99¢

7 thoughts on “Alzheimer’s Disease and An Unforgettable Mother”