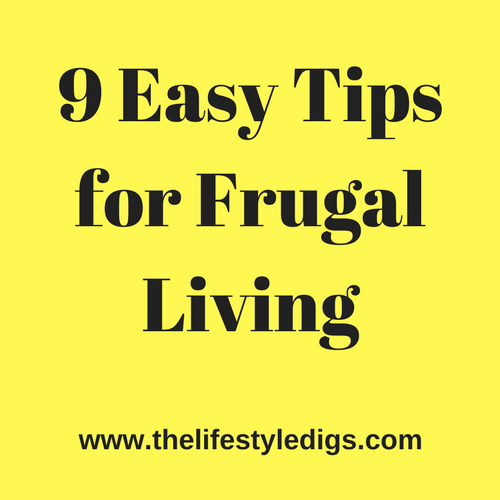 Who else has lived their life being frugal?

It’s important to note that being frugal isn’t the same thing as being cheap.

Living frugally might mean due to life circumstances, probably due to being low income earners, we’re careful how we spend or invest our money. Not everyone has the opportunity, the education, the brainpower, the financial backing, or the drive, to be in a high-income bracket. We have to learn to live within our means. I’ve never had anything handed to me. I worked hard for everything I got. And every time I thought I might be getting a little ahead, life threw me a curve ball. The car breaks down = expensive mechanic bill. When I became a house owner there was always one thing or another to repair or replace. Just about every appliance including the furnace and hot water tank and the roof come to mind. Not to mention the city taxes go up and up and up every year.

I am no longer a home owner. Struggling to pay the mortgage, taxes, and all the other bills was extremely difficult for a person who has never cracked more than $20/hour at top earning capacity. And now that I’m single again, being a homeowner is unattainable on one income.

Living paycheck to paycheck or even living without a paycheck has been a consistency my whole life and I’m used to it. I hate that I’m used to it. Especially as I get older I keep thinking life is going to get better, be easier on me.

Until it does, I continue living frugally.

Here are my 9 easy tips for frugal living:

Most grocery stores have their own brand name or a no name product to compete with well known brands. Some of these store specific brands are totally nasty, but you’ll never know until you try, so incorporate some into your next grocery day. I’ve been pleasantly surprised by a lot of Wal-Mart’s brand products, usually known as Great Value. The peanut butter is comparable to anything with a squirrel on it and their dishwasher pods do a great job. Often I find Great Value’s products are equal and often superior to well-known brand name products. Moving past groceries, getting the best value also extends to shoes and clothing and so many other purchases. You might pay more money but the item might last months or maybe years longer than something you’d pick up at a discount store. Frugal living is all about getting the best bang for your buck.

It’s true. I wear my sneakers until they’re practically falling apart. The cute pair of pink Air Nikes I bought two years ago have my big toe poking out and they’re getting holes worn in the insoles. I bought them for around $50 or $60 when the website ShoeMe was still around (bankrupt January 2017). I’m probably going to buy a pair of Roper Horseshoe runners that sell for around $125. They’re comfortable, last for years, and I can wear them if I’m walking the dogs or riding a horse. (Edited to add: I ended up buying 2 pairs of cute Ariat Fuse sneakers. See photos of them here.) I’m also the type of person who’s going to get every bit of toothpaste in the tube! Unless something is nasty and needs to be chucked out, use it for as long as possible.

I might not be the greatest DIYer around but I know how to do a Google search and find Youtube videos for instructions. Recently my KitchenAid mixer packed it in. I think I was making cookies or muffins and the paddle stopped turning. Damn! I can’t remember how long I’ve had this mixer, at least 15 years, probably a little longer. I’ve never had any problems with it. I’d rather not buy a new mixer, but I will if I have to. They cost a couple of hundred bucks but they last for a very long time. A Google search told me that the most common reason the KitchenAid mixer stops working is because the teeth on the worm gear have worn away. This happens over time or because of overloading the mixing bowl. I found a Youtube video with instructions on replacing the worm gear, from taking the mixer apart to putting it back together again. It didn’t look hard. That is if I had the right tools. Which I don’t. But…. my landlord has a well-equipped workshop and is really confident at fixing things. I phoned an appliance parts company and found the replacement part was around $25. I talked to my landlord and he suggested he take the mixer apart and make sure it’s the worm gear before I buy the part. So armed with the Youtube video, and me doing the pause and play, he took it apart and confirmed that some of the teeth had gone, well they were sitting in the grease. I bought the part and he put it in, and my mixer is working just fine again. Whew! By being frugal, I saved some big bucks by not buying a new KitchenAid mixer.

We all like eating out. Someone else does the cooking and cleaning. Unfortunately eating out is expensive. As much as I love eating out, that money can be better spent on other things. You might not think that spending $10 or $20 on a meal out is a big deal, but that can buy me a bag of fresh fruit and vegetables at the produce store that last me a week or longer. It’s OK to treat yourself occasionally (I plan to have lunch out with friends tomorrow) but your bank account won’t take kindly to constantly eating out. I have a couple of articles with more details on saving money by eating at home instead of restaurants. A Clean Kitchen Lowers the Food Bill and Quit Eating your way into Debt.

This is a rough one because people who live a frugal lifestyle because they have no other choice are always being told to pay off the credit card, put 10% of their income into a savings or investment fund, and have an emergency fund. All good suggestions but when you’re living paycheck to paycheck, not too realistic. (Disclosure: if you click on the book’s link, you’ll be taken to Amazon, and if you make a purchase, I’ll receive a small commission for the referral.) In Dave Ramsey’s book The Total Money Makeover he recommends starting an emergency fund with $1,000. Other money advisors tell people to have an emergency fund that covers living expenses for 3 months, 6 months, or even a year. Again, not realistic for people who are barely covering their bills. Most people’s emergency funds seem to be to pull out the credit card when they’re staring down a big bill from the mechanic. If that’s how you roll, then make sure your credit card is sitting closer to zero balance than at its limit.

And speaking of credit cards, if you’re the type of person who uses a credit card responsibly, like you only use it for emergencies or you pay it in full each month, then sure look for a card that’s going to give you cash back or pay for your vacation.

Don’t look for a cheap fix. Frugal people think long term before making decisions. Will this give us the best value over the long run? It’s not all about instant gratification like running into the coffee shop or taking a vacation to Paris.

I talk more about gambling in my article 15 Stupid Money Mistakes. Unless it’s $20 for the occasional casino night and it’s strictly considered entertainment without any expectation of making money, then it’s OK. Frugal people know gambling is a waste of money and will find a better use for their dollars.

Correction. Make that buy a reliable, used car. Frugal people don’t want to go into debt to buy a car, and save for that big purchase. Cars are a depreciating asset, so it doesn’t make sense to buy a new car. And it’s too tempting to have the car dealership talk you into taking out a loan to buy that new car with all the extras. The Internet is full of information on cars that are reliable and hopefully won’t cost too much in repairs. Check out my first solo experience buying a used car.

Do you have any tips to add to this list for frugal living?